Following the unofficial leaking of product images last month Panasonic has today officially launched the GF5 – the successor to last year’s GF3. Why no GF4 in between, you might ask. Simply because in Japan 4 is considered an unlucky number. So there you go, the GF5 it is then. Available from June the GF5 will come with either the 18-42mm Lumix ‘X’ power zoom (£579) or the regular Lumix 14-42mm kit zoom (£449) bundled in the box. These are estimated street prices and so don’t account for any in-store/online discounting that might take place. There’s no word as yet on body-only prices or availability. 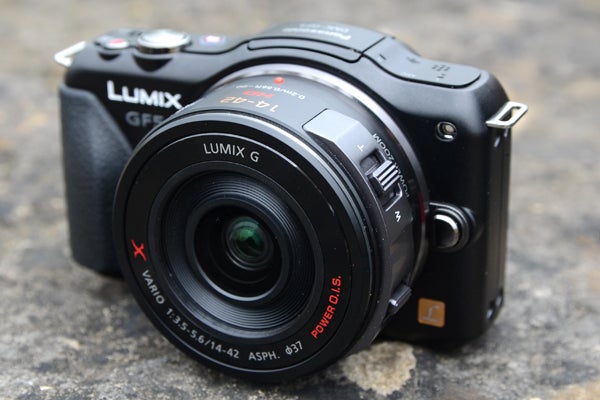 As part of the announcement Panasonic invited a group of technology and specialist camera press representatives – TrustedReviews included – to Chessington World of Adventures in Surrey for an extended hands-on with the new camera. We should point out that the version we got to play with was a pre-production sample with pre-release firmware, however from our limited time with it, it looks like Panasonic could well be on course to deliver another fine Lumix G-series model.

In terms of positioning the GF5 takes over from the (now discontinued) GF3 as the entry-level Lumix G-series model. The GF5’s target audience includes first-time compact system camera (CSC) purchasers and compact owners looking to make the step up from a basic or advanced compact. As such its primary goal is to deliver the same high level of image quality associated with the Lumix G-series range in a small, stylish and easy-to-use package. Does it succeed in achieving this? From what we’ve seen so far, we’d have to say that it does.

Physically the GF5 is almost identical to its predecessor, save for the new finger grip that’s been borrowed from the GX1 and the addition of a metallic lens mount (the GF3’s mount was plastic). Elsewhere the new model retains the same chic curved design and compact dimensions of the GF3. With the Lumix ‘X’ power zoom attached you’re looking at something that’s small enough to slip inside a coat pocket, although with the regular 14-42mm kit zoom you may want to consider investing in a small carry case. 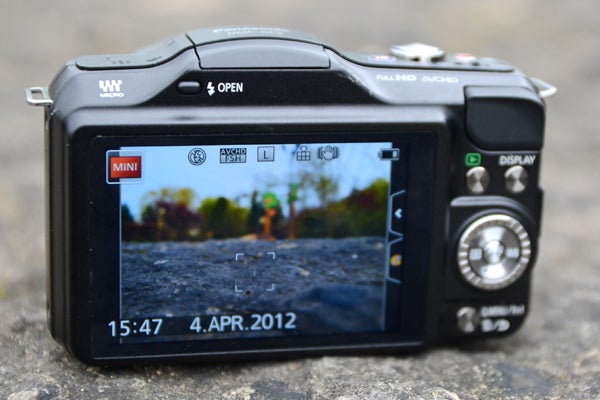 The addition of the finger grip makes the GF5 noticeably more comfortable to hold than the GF3, which had a smooth front fascia. Like the GX1 that was launched earlier in early 2012, the GF5’s finger grip is given a rubberised finish and this, in conjunction with the moulded thumb grip on the back gives makes the GF5 feel pretty secure in the hand. With the ‘X’ power zoom attached there isn’t a great deal of weight to the camera either (362g), so it won’t weigh you down if you plan to carry it around all day.

Internally, the GF5 benefits from the pairing of an all-new LiveMOS sensor and Venus Engine VII HD image processor. While the effective resolution of the new sensor remains pegged at 12MP – the same as the GF3’s – Panasonic claims that it has been completely re-designed to allow for better low-light performance. Meanwhile, the new Venus Engine VII image processer offers what Panasonic describes as “multi-process noise reduction” for cleaner images at higher sensitivities. Consequently, the GF5 comes with a higher maximum sensitivity setting of ISO 12,800 (compared to ISO 6400 on the GF3).

Shooting modes remain as before with iAuto and iAuto providing fuss-free point-and-shoot exposure options, the latter offering some simplified user input via on-screen slider controls. There’s also a good range of Scene modes on offer – each of which now comes with a range of shooting tips and explanations that aim to help new users better understand what the camera is doing and how it helps to get the best out of the subject being photographed. Those looking to take a bit more control can of course choose from the regular DSLR quartet of Program, Aperture-priority, Shutter-priority and Manual exposure modes. 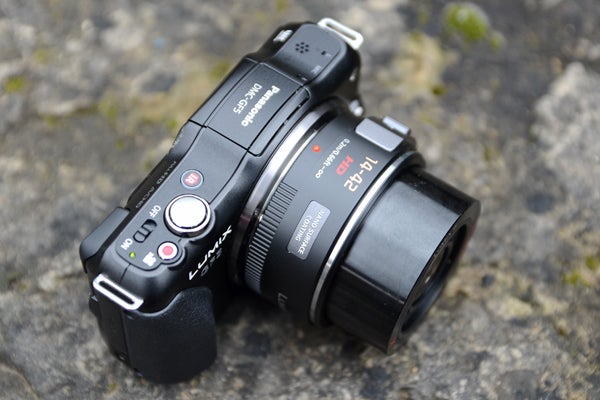 Those looking to add a bit of in-camera creative fun to their images will doubtless be pleased to learn that Panasonic has expanded the range of digital filters found on the GF5 to 14. Alongside established favourites such as Toy Camera and Miniaturisation, you’ll also now be able to give your images a cross-processed or selective colour look. Better still, each of the effects can be manually fine-tuned to give it your own signature look.

Movie capabilities remain the same as the GF3, with a top recording setting of 1080p Full HD with stereo sound but not external microphone input. High definition movies can be recorded in a range of AVCHD quality formats, with a further option to record standard definition movies in the MP4 format. 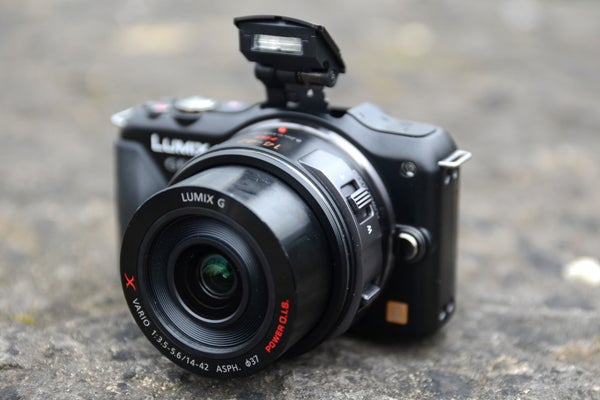 One of the biggest selling points of the GF3 – especially for CSC newcomers – was its ease of use. This was largely facilitated by its hybrid control system that allows for touch-screen and physical button control. The newer model retains this approach, with the touch-screen offering an intuitive way to select shooting modes and navigate the in-camera menu, although you can always fall back on the directional pad and/or the Quick Button and main Menu buttons should you wish. 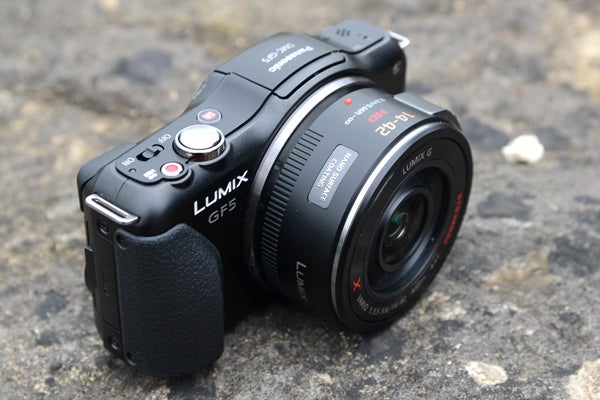 One big improvement to the GF5 over the GF3 is the improved high-resolution LCD screen. Whereas the GF3 came with a 3in, 460k-dot monitor this has been bumped up to 920k-dots for the GF5. The result is pin-sharp images and in-camera menu graphics that – regardless of whether you’re using the rear monitor to frame a shot, reviewing images you’ve already taken or using the in-camera menu to change a setting – greatly enhances the overall user experience of the GF5.

There’s still no hotshoe mount though, which means you’ll be unable to attach a more powerful flash or compatible electronic viewfinder. Given that the GF5 isn’t really targeted at enthusiast or advanced users this is just about forgiveable, but only just. The built-in pop-up flash that’s neatly housed inside the ‘hump’ on top of the camera should prove perfectly adequate for shooting close subjects or lighting up limited areas at night.

AF performance is another area where the GF5 impresses. Panasonic claims the camera offers an AF-lock speed of just 0.09sec, making it one of the fastest on the market. While we’ve not been able to verify this claim with a stopwatch there’s no doubt that the GF5’s AF system is faster than most – even when light level is less than ideal. 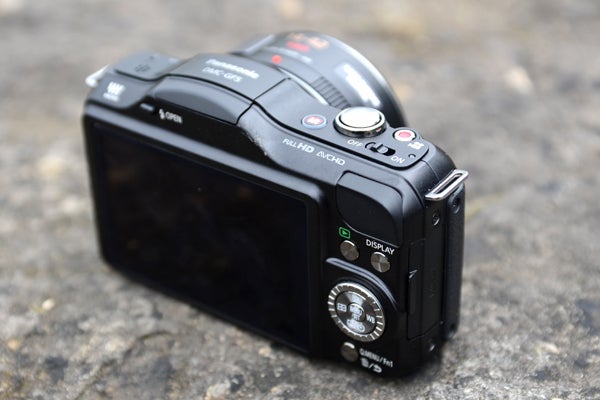 During our hands-on time with the GF5 we found ourselves in Chessington’s open aviary (in gloomy overcast conditions we might add) amid a dozen or so brightly coloured parrots all of whom flatly refused to stay still for more than a fraction of a second. Thanks to the GF5’s super-fast AF, however, we managed to shoot not one, but several sharp images of the birds as they incessantly hopped about demanding food from everyone inside the mesh (see Sample Images: General Images). Ok, so it’s not a particularly scientific approach to testing, nonetheless it’s still a good real-world example of how a fast-performing AF system like that found on the GF5 can really benefit image quality and help you to get that shot in the bag.

Speaking of image quality, from our limited time with a pre-production sample we’ve been left mightily impressed by the little GF5. To be fair, its predecessor was also perfectly capable of taking a very good image so it’s not as if Panasonic has reinvented the wheel or anything. Nonetheless, wandering around Chessington World of Adventures for a couple of hours with the new GF5 and an assortment of interesting lenses (8mm fisheye, 25mm f/1.4 Leica Summicron and the 14-42mm Lumix ‘X’ power zoom – all premium lenses it must be noted) we were able to put our sample model through its paces in a variety of conditions, and can report that we were left highly impressed with the results it produced.

Colour is one particular area in which the GF5 excels, producing images that are richly coloured and vibrant but which still feel lifelike. While the GF5 can be set to record lossless Raw images, we spent the day shooting full-resolution JPEG’s in the default 4:3 aspect with the ‘Standard’ Picture Style setting applied. And yet, even on a gloomy overcast day with flat light the GF5 was still able to produce punchy images with pleasingly vibrant colour. This especially applies when you’re shooting subjects up close, rather than taking wideangle landscape shots where the flat UK sky is clearly visible. 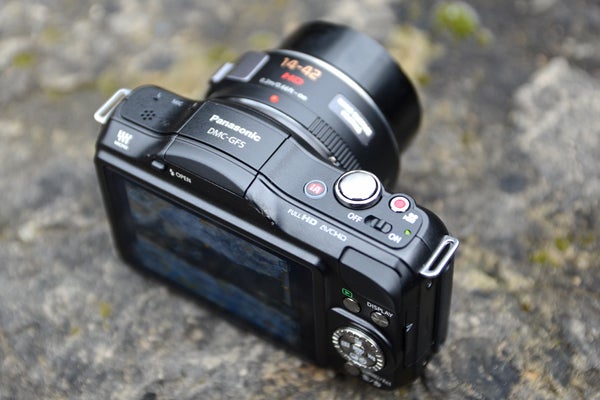 Low-light performance also impresses, and with the camera cranked up to ISO 1600 we were able to record noticeably clean and detailed images that were relatively unaffected by noise. Those upgrading from a compact will undoubtedly notice the step up in image quality and we’d bet that many APS-C DSLR users would also find the GF5’s noise control on a par, if not more impressive, than their own bigger-sensor cameras too.

White balance proved consistent during the time we had the camera, with all the images we took shot with the camera set to Automatic white balance. Metering also proved reliable on the whole, although we did notice a very slight tendency to underexpose by around a third of a stop on occasion. Of course, you can always override the in-camera metering module by applying some EV compensation as you see fit. In any case and as a rule of thumb, it’s generally easier to reclaim shadow detail than blown highlights.

Verdict
The Lumix GF5 is a style driven entry-level point to Panasonic’s G-series range of compact system cameras, and succeeds last year’s GF3. Small and stylish, it’s an easy to use digital camera that’s capable of excellent image quality. Upgrade highlights over the previous model include a new finger grip, a metallic lens mount, a much improved LCD monitor and new additions to the range of on-board digital filters. We’ve given it a thorough hands on test and can safely say that Panasonic appears to have pulled another rabbit out of the hat with the GF5. 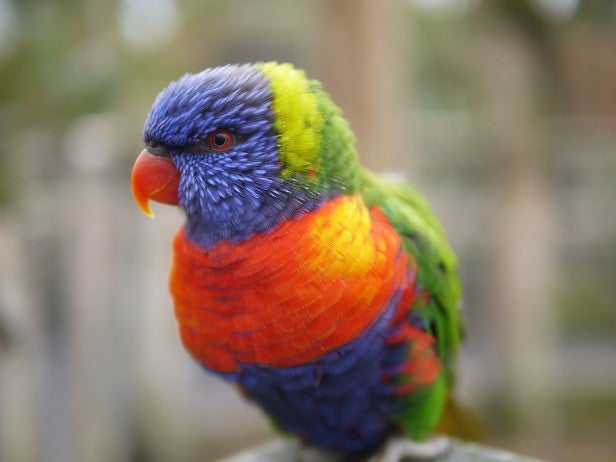 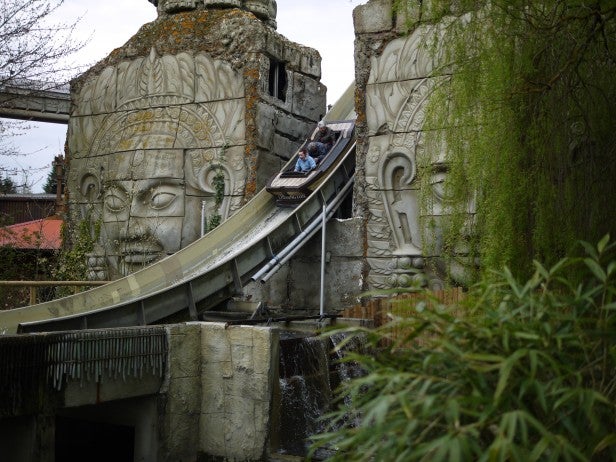 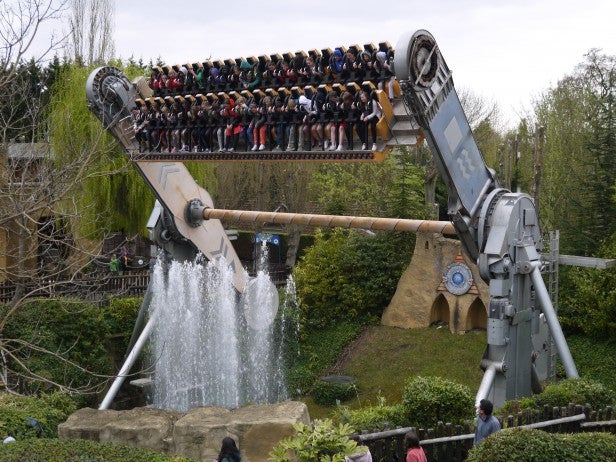 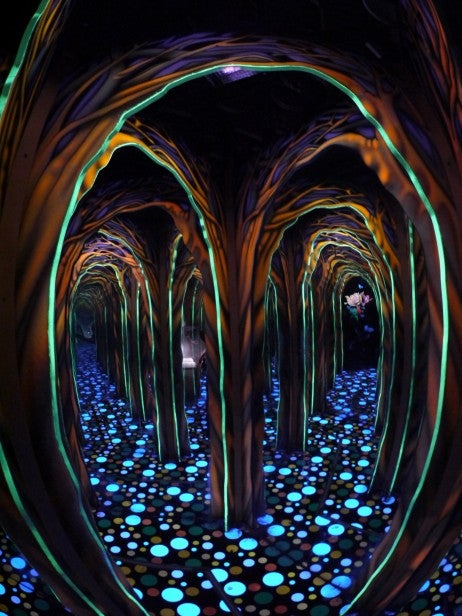 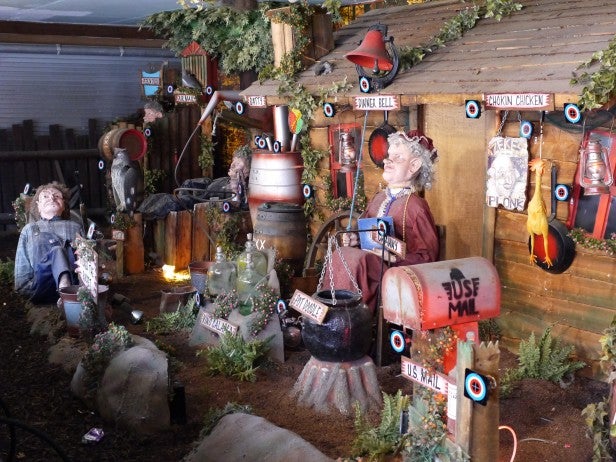 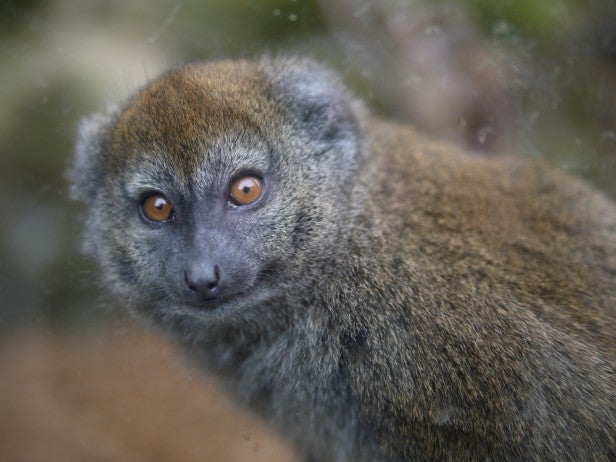 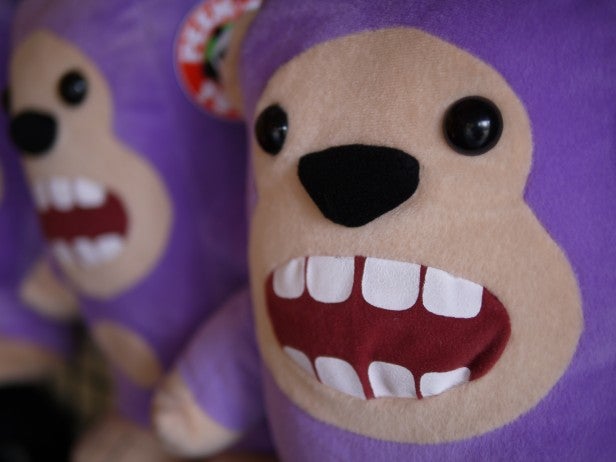 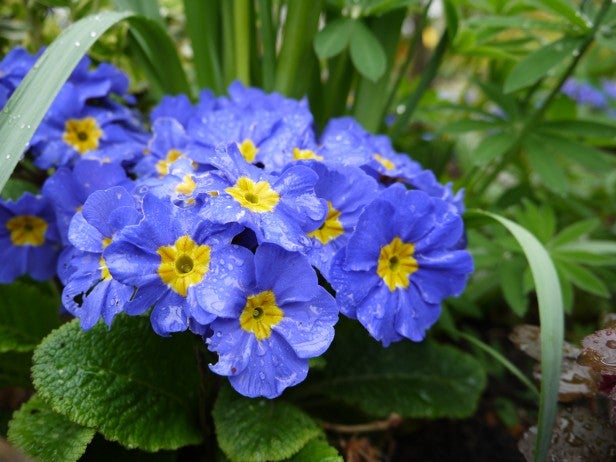