I’m usually wary of cameras targeting vloggers. Cameras in this class are often dumbed down and made by cutting as many corners as possible to keep the price low. The results are typically disappointing. But Panasonic has shown social media creatives due respect with the Lumix G100 by giving it great ergonomics, decent manual controls, a viewfinder and attractive specs. There are still a couple of let downs that I feel could have been easily avoided though. For example: opting for a dated USB 2.0 Type-A instead of a USB-C port and no 4K/60p video. Overall however, the Lumix G100 is a great first camera option and a significant step up from a smartphone.

The Lumix G100 is a compact video-centric MFT camera and Panasonic’s latest attempt to tempt social media creatives away from smartphones.

Designed to take anywhere fun content might be shot, the Lumix G100 avoids the pitfalls of typical “vlogging camera” alternatives by featuring more traditional ergonomics. This means it has a proper grip and an electronic viewfinder. It also has a micro-four-thirds sensor and interchangeable lens mount, two distinct advantages over a smartphone.

Micro-four-thirds (MFT) sensors are around five times larger than the 1/1.7-inch sensors used in some of the leading smartphone cameras. Larger sensors typically deliver better quality images, particularly in low light. Although vast improvements in phone image processing have begun closing that gap in quality, especially if you’re not making prints of your photos.

Aside from sensor size, lenses are the second component needed for capturing high quality images and video clips. And as an MFT camera, the Lumix G100 opens up access to a vast number of brilliant and affordable lenses. Often when enthusiasts are exploring their skillset, they find that the fixed lenses on their smartphones or pocket cameras limit their creativity. There’s no such issue with the G100. 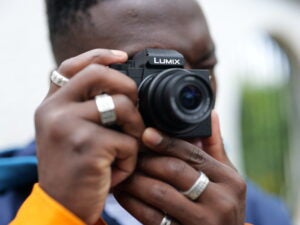 Despite being super compact, the Lumix G100’s design is traditional “DSLR” style, with a centrally-placed Electronic Viewfinder and manual controls. Some may find it intimidating to make the leap from smartphone or pocket camera to a dedicated interchangeable lens camera. But the Lumix G100 has a balanced layout, offering enough physical controls to appeal to people who want to change settings manually, as well as touch screen functionality.

Four out of six of its buttons are customisable, with a further five Fn buttons accessible via use of the touchscreen. When in manual mode, the dials on the top and rear of the camera allow the user to adjust shutter speed and aperture intuitively. This is a bonus when taking pictures with the camera held up to one’s face to shoot through its bright 3.68m-dot EVF. The dedicated anodised red record button next to the shutter button also makes it easy to start and stop videos. As far as usability goes, this is a camera that even a beginner will find welcoming. The G100’s controls and layout are approachable and make it easy to capture top content.

Weighing only 303g the Lumix G100, weighs less than two iPhone 11s stacked. This makes it perfectly comfortable to use while vlogging or taking selfies. Safe to say it is a camera that can be worn around your wrist or neck comfortably, all day. Speaking of vlogging and selfies, this camera’s fully articulated 3.0-inch screen can be flipped out and rotated to ensure you can frame yourself and friends easily. 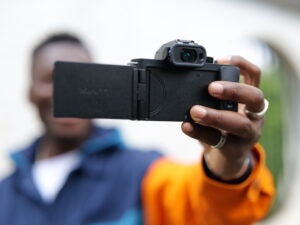 The frame of the camera is a tough polycarbonate plastic with some metal detailing and the mechanism of its screen arm feels robust enough. Perhaps the only place I would be wary about dropping the camera is on its pop-up flash, which sits above the EVF. The mechanism for that feels a little less likely to endure repeated trips to a hard floor. There’s no weather or dust resistance rating for the G100, but Panasonic assured me that it’s built to withstand light rainfall. I did in fact use the G100 in those conditions and had no issues.

The Lumix camera menus are straightforward enough to avoid confusion and the G100’s Fn4 button is set to smartphone pairing by default, this makes connecting to your phone super simple. Just tap the button, open the app and you’ll be paired to your phone within 30 seconds or so. Pairing to your phone via the Lumix Sync App allows you to remotely control the camera, as well as view and transfer your files straight to your phone for swift sharing on socials.

It’s not the largest screen, but considering how small the G100 is, 3.0-inches with 1.84m dot resolution is good enough. It won’t blow smartphone users away but it has solid contrast and I found it clear enough to use on sunny days. That’s something that can’t be said for a lot of cameras at this price point. When recording, the screen can also display a red border, letting you know that it’s rolling. It’s a simple, but very helpful feature.

Having full articulation isn’t just great for composing vlogs and selfies, it also makes it much easier to capture content at creative angles. The G100 can remember its orientation as well. This is handy because it means you can record videos and photos in portrait mode for social media without having to rotate them afterwards.

Although it’s aimed at vlogging types, the G100’s 20.3MP Live MOS sensor is more than capable of capturing detailed stills pictures with punchy colours. It also shoots RAW files and can take 10fps burst-mode JPEGs. If you really need to stop the action, Lumix’s 4K Photo mode will let you record clips in 4K and select 8MP JPEGs. 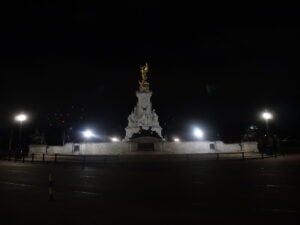 Taking pictures in low light is often a disappointment with phones and other smaller sensor cameras. The G100 will give you better results. With a decent ISO sensitivity range, you’ll get usable images up to ISO 3200 and with slower shutter speeds, thanks to Hybrid 5-axis IS (only with compatible lens). And it also has a pop-up flash if needed, for parties and night portraits. When you feel like spending a little more, the G100’s hotshoe is compatible with powerful external flashguns, which will deliver professional-looking results.

A maximum of up to 4K/30p and Full HD/60p video recording is available on the G100, as well as 2/4x slow-mo or 2/4/8x quick video via the S&Q mode. There’s no audio recording in slow or quick modes, but AF works, which is decent. I was impressed with the camera’s 4K and Full HD footage, though it is a disappointment it doesn’t get up to 60p at max resolution, especially as 4K/60p is becoming standard on top smartphones these days.

A 12-32mm f3.5-5.6 kit lens with Optical Image Stabilisation (OIS) comes in the box for the G100, and it’s a quality piece of glass that’s suitable for street, travel and portrait pictures. It seems quite wide at 12mm, but there’s a significant crop applied when recording 4K-video. 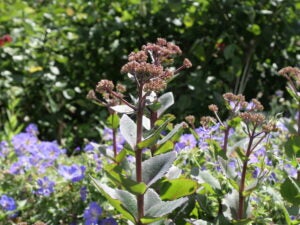 The 12mm kit lens is effectively 24mm while shooting in 4K. This means your face will fill a lot of the frame during vlogs and selfies, especially if you take advantage of the camera’s 5-axis Hybrid image stabilisation (only 4-axis with 4K video). The crop isn’t a deal breaker, but it’s a good excuse to grab the optional Lumix SHGR1 tripod grip. It’s actually thrown in for free as a bundle deal while stocks last, so you’ll want to act quick if you’re tempted by this camera.

The tripod grip plugs into the camera and adds two controls; one for taking pictures and one for stop/starting video recording. It also gives you a little extra arm, enhancing the G100’s selfie and vlogging-use.

One of the G100’s main USP’s is that it features OZO Audio by Nokia. Yep, same brand as the phones. OZO Audio gives the G100 a clever 3-way audio recording function that combines with visual detection software to direct its microphones towards the person speaking. 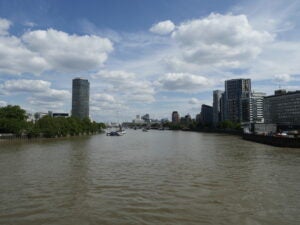 This enables the camera to boost its audio signal to the front of the camera while you’re vlogging. But it can also do the same when you’re behind the camera, commentating while capturing a location. The user can decide whether to focus the audio frontwards, backwards or in every direction. But in use the camera does a decent job of selecting the correct mode automatically and isolating voices better than competing options. It’s not better than an external microphone, but it’s a great option if those on a budget or if one wants to keep the setup as compact as possible.

One let down is that despite the great in-built audio and external microphone input, there’s no headphone input or USB-C port to provide a headphone input workaround for the G100. It’s a glaring omission and one that will undoubtedly turn some people away from an otherwise ideal camera.

Should you buy the Panasonic Lumix G100?

If you’ve discovered you have a passion for content creation, but at the same time, you’ve also realised that your phone or pocket camera is holding you back.

If you need better zoom capabilities, the interchangeable lenses available to the Lumix G100, will wipe the floor with anything you can get from a third party smartphone lens accessory company right now. 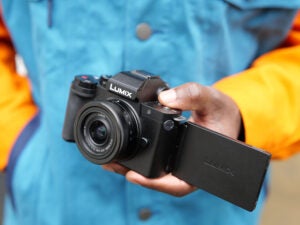 If you want better quality photos, the larger sensor of the Lumix G100, plus superior lenses and Hybrid IS, will deliver consistently good photos in a wider range of scenarios vs a smartphone. Same goes for video quality for the most part. Plus if recording video, it will be much easier to capture more professional sound from a dedicated camera.

The Lumix G100 is a great option for any social media creative who has hit the limits of their smartphone and is keen to take their creativity to the next level.