Panasonic’s G-series 45-150mm lens sits alongside two
alternatives; one covers 45-175mm (with a power zoom) and the other covers
45-200mm. The 45-175mm PZ is significantly more expensive but superficially there
is little to choose between the other two: even their full apertures vary to
the same extent, from f/4 at 45mm to f/5.6 at their respective maximum focal
lengths.

Clearly the 45-200mm lens is more attractive by virtue of
having a wider zoom range but the 45-150mm lens is not only around £50 cheaper
but also smaller and lighter. In addition, it has been designed for both
still-picture and video photography, which means it is effectively silent in
use. In short, what it lacks in zoom range it makes up for elsewhere.

Externally this is a very traditional lens, without the
rocker switches that adorn Panasonic’s power-driven zooms. A broad zoom ring
fills the centre third of the barrel with a smaller focussing ring in front:
there is nothing to the rear as mode changes for focussing and image
stabilisation are carried out on the camera body.

Both rings sit readily within reach and have a smooth feel
with just the right amount of resistance. The zoom ring rotates through very
nearly ninety degrees and extends by about 50%: there is no lock to secure the
lens at its most compact size for storage but there is no great need for this
given the zoom’s modest mass.

The focussing ring is effective only in MF mode, which is
selected on the camera body (via a very fiddly switch on the G2 body used for
this review). Once activated, turning the focussing ring causes a magnified
central area of the scene to be displayed in the viewfinder: there is no
electronic assistance to indicate when accurate focussing has been achieved.

It is worth noting that the lens has to be refocused after
zooming and the minimum object distance (closest focussing distance) increases
with longer focal lengths. Also, the lens is less likely to focus automatically
in dimly-lit environments when a longer focal-length setting is used.

Despite its highly unassuming nature this proved to be a
very enjoyable lens to use. It feels well matched on a Micro-Four-Thirds body,
without the excess mass and bulk that some telephoto lenses bring to
small-format cameras. Focussing was indeed virtually silent and also refreshingly
quick. Despite some technical reservations (see below) image quality was subjectively
very pleasing. The zoom’s large-scale use of plastics to keep the weight down
might be a cause for concern but the lens mount itself is made of metal and is
securely seated into the barrel.

Technical testing produced an acceptable but uninspiring set
of MTF curves. Along the way, however, it also revealed a near-total absence of
chromatic aberration. Encouraging though any freedom from colour fringing must
be, there was something a little odd about the tonal curves across
high-contrast boundaries that may have been due to the application of an image
correction technique to remove colour fringes rather than a genuine freedom
from them. Although that explanation is pure conjecture it is true to say that
in real-world images there were signs of a lack of tonal smoothness, so perhaps
there is a tonality issue after all – but if so then that is a camera quirk,
not a lens characteristic.

At under £300 this lens is something of a bargain. It is the
most modestly specified but also the cheapest of three Lumix zooms that offer similar
focal-length ranges. It has a virtually silent AF system and is both lightweight
and compact. Yes, it has a rather restricted maximum aperture at its maximum
focal-length but that is no different from any of its peers. Similarly, all
three lenses have optical image stabilisation that partly addresses their
aperture limitations though this does nothing to compensate for the lack of
depth-of-field control. 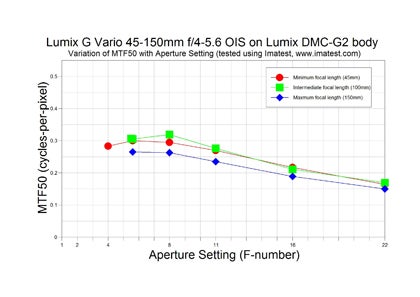 Panasonic’s 45-150mm zoom exhibits good sharpness at wider
apertures but its MTF figures drop fairly quickly to the extent that pictures
taken at f/22 are likely to be visibly softer than those taken at around f/8,
where the lens exhibits peak sharpness. 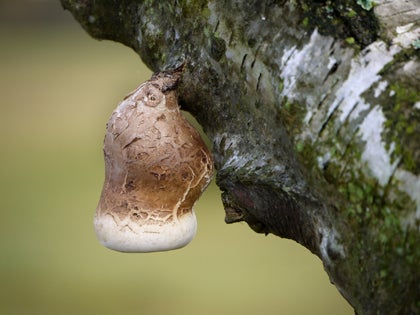 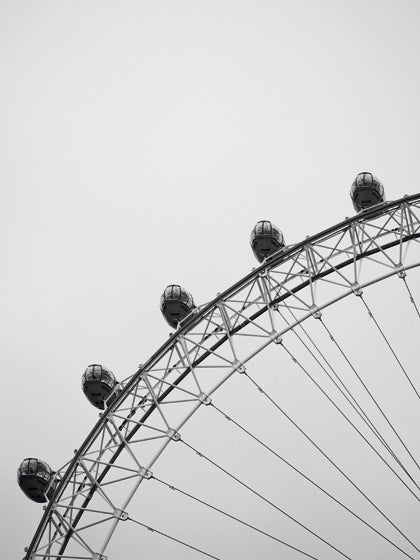 Overall, this is the perfect multi-purpose telephoto zoom for old-fashioned photographers who prefer to control their lenses via rotating rings rather than power-driven mechanisms.