The Panasonic Lumix DMC-FZ62 (also marketed as the FZ60 in some territories) joins the FZ100 and LZ20 as the newest additions to Panasonic’s superzoom range, slotting in between the two other models within the Lumix superzoom hierarchy. The new model brings a 24x optical zoom to the table along with several new hardware components but lacks the constant f/2.8 aperture and high-resolution EVF of the more expensive FZ200. For the time being the older FZ45, FZ48, FZ100 and FZ150 superzoom models are all retained within the Lumix line-up, although the arrival of the three new models is likely to see their prices drop.

This being a superzoom the thing that will be of most interest to potential buyers is the optical zoom, and in this respect the FZ62 delivers the goods with a 24x Leica-made fixed zoom that offers the 35mm equivalent of 25-600mm. The lens is a LEICA DC VARIO-ELMARIT optic that further benefits from Nano Surface Coating to reduce the effects of glare, and Panasonic’s own Power O.I.S. image stabilisation technology to minimise the effects of camera shake and help keep images (and movies) sharp. Maximum aperture is f/2.8 at 26mm, rising incrementally to f/5.2 at 600mm. 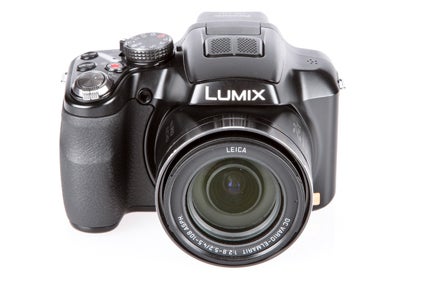 Internally, the new model employs a 1/2.33in High Sensitivity MOS sensor with an effective resolution of 16.1MP. This represents a fairly sizeable increase over the 12.1MP sensors found in the previous generation of Lumix superzooms, although this does in turn raise some questions over pixel density and the effects this might have on low-light performance. To this end Panasonic claims that the FZ62’s Venus Engine image processor improves image quality at high ISO settings through ‘Image Noise Reduction’ and ‘Multi-process Noise Reduction’ to help image quality at high ISO settings. Speaking of sensitivity, the FZ62 offers a standard ISO range of 100-3200, which is expandable to ISO 6400 in High Sensitivity Mode albeit at the expense of overall resolution.

Panasonic also claims that the Venus Engine improves general performance, providing fast start-up times while enabling the camera to shoot at up to 10fps – albeit for a maximum of three consecutive shot. Just as importantly, the FZ62 also benefits from the same Light Speed AF system found in the company’s compact system cameras. 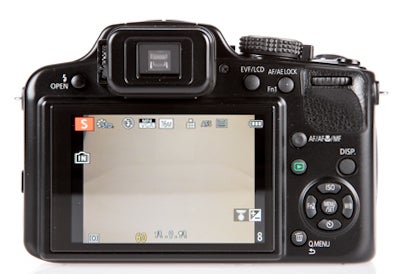 On the back of the camera sits a fixed 3in, 460k-dot LCD screen that provides a 100% field of view. Should you prefer to hold the camera at eye-level then the FZ62 also offers a 0.2in electronic viewfinder (EVF) with a resolution of 202k-pixels which, again, offers 100% field of view. There’s no eye sensor built in though, so you’ll need to use the LCD/EVF button next to the eyepiece in order to toggle between the two options.

The FZ62 is JPEG only, with no provision for the capture of lossless Raw image files, however it does offers manual control in the form of Program, Aperture-priority, Shutter-priority and full Manual control exposure modes. Should you prefer to let the camera do all the work then the FZ62 offers Panasonic’s tried and tested intelligent Auto (iA) point-and-shoot mode alongside 18 Scene modes. The FZ62 also gets 14 ‘Creative Control’ digital filter effects that can be applied to your images at the point of capture, allowing you to add fun effects to your images without the need for any time-consuming post-processing software. Within the Creative Control sub-menu you’ll find all the usual favourites including ‘Miniature Effect’, ‘Toy Effect’, ‘Cross Process’ and ‘Selective colour’.

Movie enthusiasts are well catered for with the FZ62 offering 1080p Full HD video capture at 25fps in both the HDTV-friendly AVCHD format and the more computer friendly MP4 format. There’s no external microphone input but videos are recorded in stereo via twin microphones positioned on top of the camera. There’s also a noise reduction system and an Auto Wind Cut function available, should you need them. The zoom remains active during movie recording and it’s also possible to add Creative Control effects to movies should you want to. 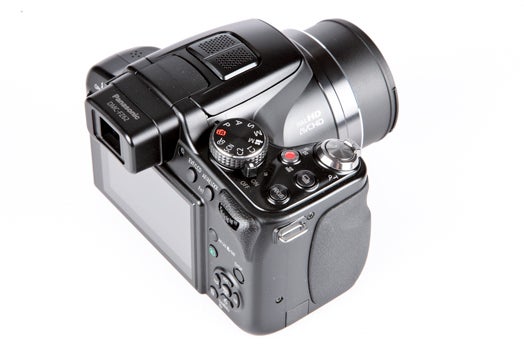 In terms of design the FZ62 doesn’t break with superzoom conventions and, as such, follows the established template of looking not dissimilar to a miniaturised DSLR – albeit one with a fixed zoom lens rather than one that’s interchangeable. The handgrip is fairly pronounced and also rubberised, which allows you to wrap your fingers around it for a secure and comfortable grip on the camera. In keeping with other Panasonic Lumix cameras, overall build quality is quite good with the camera feeling solid enough to stand up to plenty of use. The exposure mode dial and main on/off switch are also firm enough to withstand being accidentally nudged during regular use.

The FX62 offers a generous range of physical buttons, evenly distributed on the top and back of the camera, enabling you to quickly access and a range of shooting settings. On the back, the four-way directional pad grants direct access to ISO, White Balance and Self-timer settings, with the final button acting as a Function (Fn) button that you can assign as you see fit. In addition, the AF/AE-lock button to the right of the EVF also doubles up as a second Fn button should you need it.

On the top of the camera you’ll find a large mode dial, and a dedicated video record button along with buttons providing one-touch access to Focus and Drive mode settings. The only minor gripe we have is that there aren’t any controls on the zoom barrel itself; it’s not unusual to find a zoom control placed here, something that Panasonic itself implements on its CSC power zoom. This is only a minor criticism though, as in all other aspects the FZ62 is a very comfortable and well laid-out camera to hold and use. 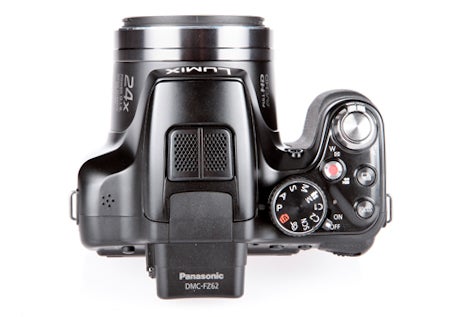 Given how favourably Panasonic’s proprietary Light Speed AF technology has been received, it’s not all that surprising to find that it has been extended to the FZ62. First seen on the company’s high-end compact system cameras, it’s one of the quickest AF systems on the market with focus lock speeds as fast as 0.09secs throughout the whole of the FZ62’s 24x focal range. If you’re looking to capture a fleeting moment, then sluggish autofocus can sometimes make this impossible; with Light Speed AF on board, however, you’re much more likely to get the shot. That said there is a bit of a downside and while focusing speeds are undoubtedly fast, accuracy can be a bit of an issue at the telephoto end of the zoom. 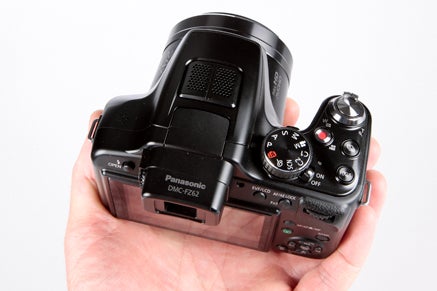 With a resolution of 460k-dots the 3in LCD monitor on the rear of the camera performs well, and also offers a good views in difficult lighting conditions. The screen gets a 3:2 aspect ratio however, which is a bit out of step with the 4:3 aspect of the sensor, resulting in slightly smaller on-screen images. If you decide to shoot in 16:9 to utilise the full area of the screen, then bear in mind that you’ll have to shoot at a lower overall resolution of 14MP.

In addition to the Light Speed AF and quick start-up and response times, the FZ62 offers a generally pleasing user experience. The in-camera menu system is intuitive and well laid-out, making it easy to find what you’re looking for and to make changes. Aiding and abetting this is the presence of a Quick Menu button on the back of the camera, which at a stroke calls up a sub-menu of all the most regularly accessed settings from where you can make a number of quick changes without having to open the main in-camera menu. 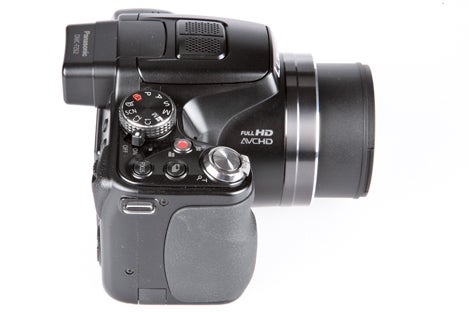 While the maximum continuous shooting speed claimed by Panasonic is 10fps, it’s worth bearing in mind that it can only be used to capture three consecutive images at a time. Images can also be captured at a continuous shooting speed of 5fps, although that rate is also only available for a limited number of frames before the camera buffer fills up and the speed drops.

Using the camera in any of the manual or semi-manual PASM modes offers some advanced functionality for those with a bit more camera experience, however Panasonic’s own iA mode is also very useful for point-and-shoot photographers. When used in iA mode the camera selects what it considers to be the correct Scene mode depending on conditions and automatically applies all its own settings. Should you want to use a happy medium between the two then iA mode allows you to adjust colour and brightness settings to give your images a more personalised feel. 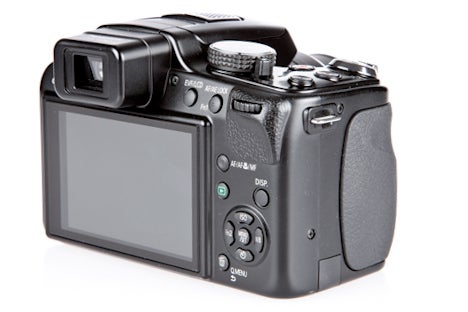 Overall, we were quite impressed with the image quality produced by the FZ62, although there are a few areas where things could be improved. The FZ62’s metering module can be set to Intelligent Multiple area, Centre-weighted and Spot and performs well, producing generally balanced exposures. Dynamic range is impressive too, especially given the small 1/2.3in sensor. Straight from the camera, processed JPEGs show pleasingly lifelike tonal qualities.

One drawback of superzooms, or indeed any camera sporting a zoom lens with a big focal range, is that some lens-based aberrations can occur. These usually manifest themselves as purple fringing on high-contrast borders and a loss of critical sharpness (usually most visible at the telephoto extremes). While the FZ62 does also suffer from these problems to some extent the camera largely manages to do a good job of keeping the, in check. Fringing, although evident at the wide-angle and tele end of the zoom, is generally well controlled throughout the majority of the focal range. Edge sharpness is also maintained well, although there is a slight softening towards the more tele end of the zoom. 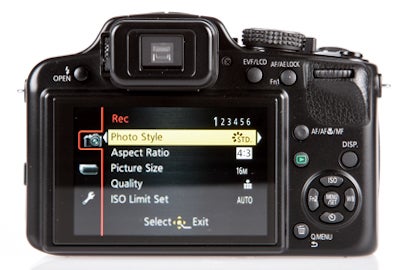 Verdict
The Panasonic Lumix FZ62 is another worthy addition to Panasonic’s already well-regarded superzoom range. It’s a well-featured model that offers something for both enthusiast and novice photographers, while image quality remains good in a variety of lighting conditions. There are a few chinks in its armour, such as the lack of a zoom control on the lens barrel, however none of these are what we would consider critical flaws. Perhaps the biggest complaint we can make is that there’s no provision for Raw capture, although the FZ62 is hardly the only superzoom on the market to omit this useful feature. Overall though, the FZ62 is an excellent superzoom that combines a pleasing user experience with good image quality. 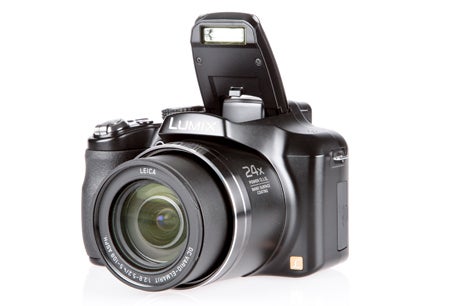 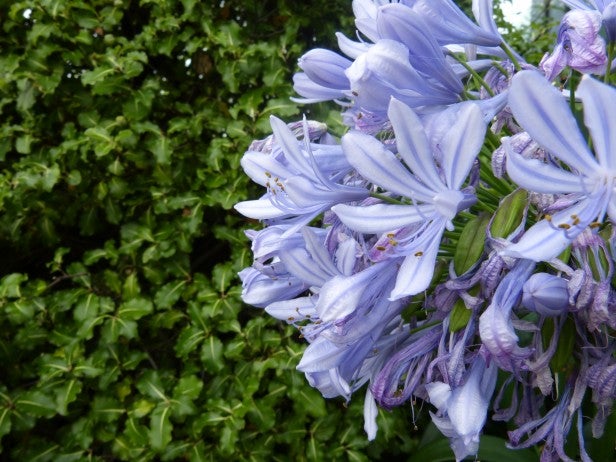 The ISO test image in full. Below are 100% crops taken from the same composition at different ISO settings. 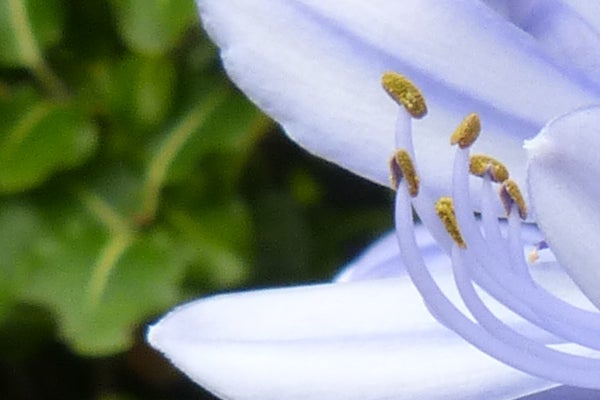 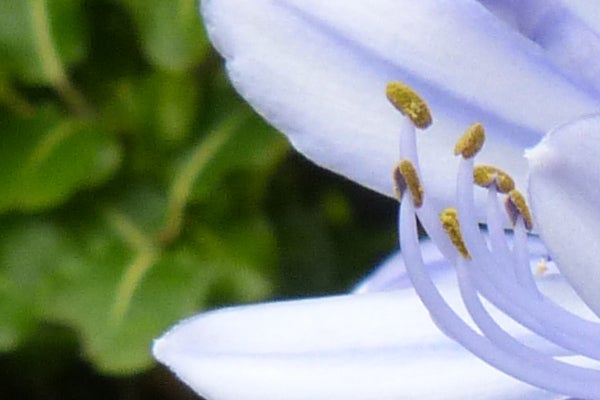 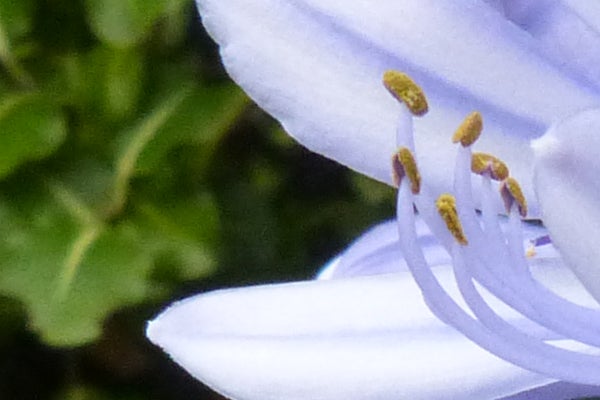 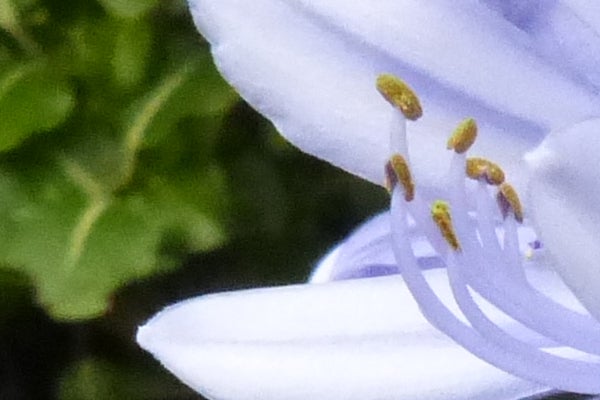 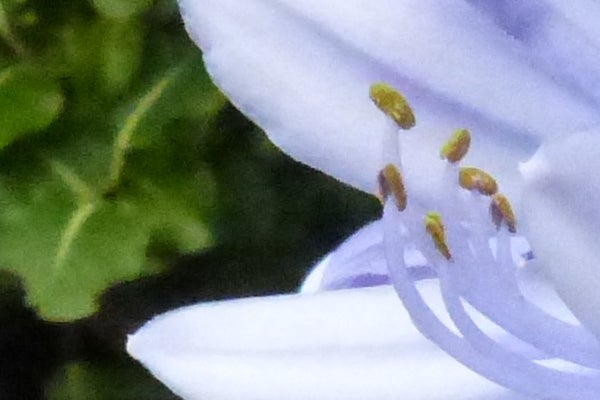 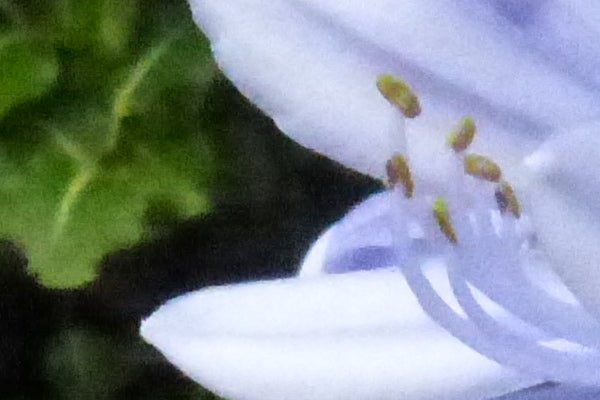 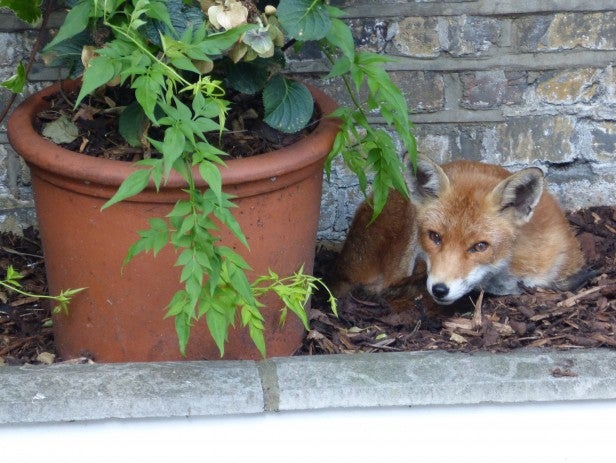 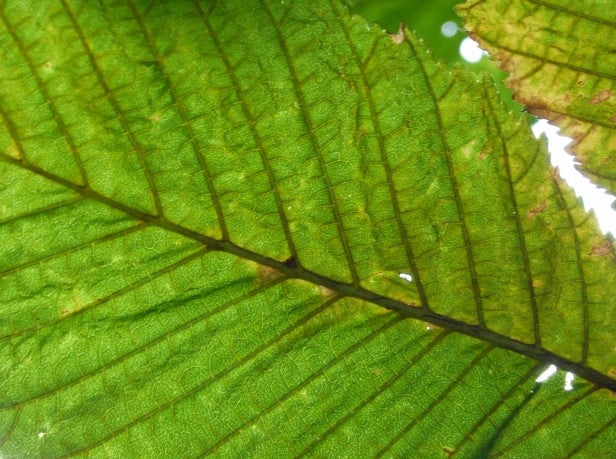 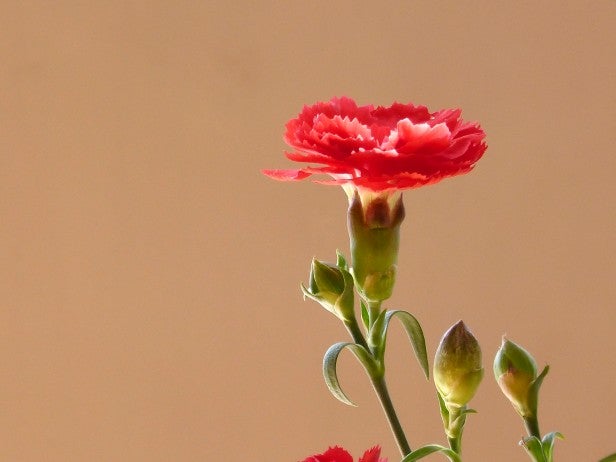 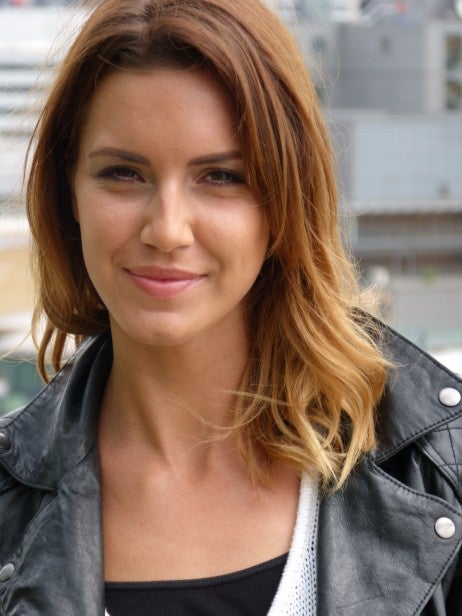 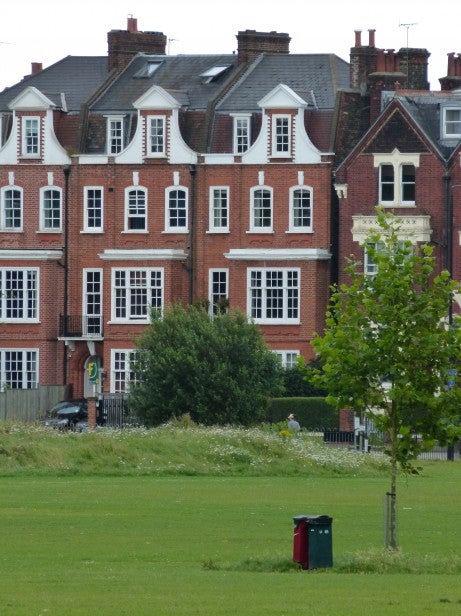