I have, in some of my previous reviews, been perhaps a little hard on Panasonic, and to tell you the truth I’m not entirely sure why. The company has produced some excellent cameras, such as the DMC-FX01 which I reviewed just before Christmas, as well as the models that it makes for Leica. Sure, it’s turned out one or two real stinkers as well, but then I can’t think of a camera company that hasn’t.


So I hereby apologise if I’ve been unfair, and to show there’s no hard feelings I’ll try to be nice about this week’s camera, the new Lumix DMC-TZ2. It shouldn’t be too difficult, because this is definitely one of the good ones. 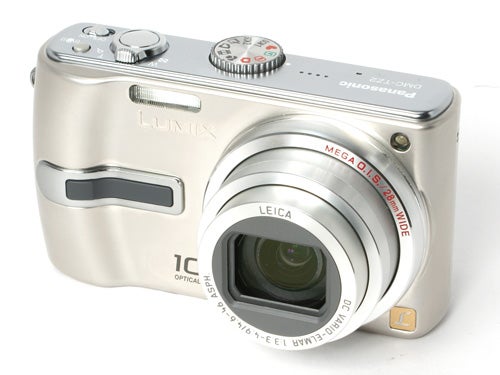 Announced in January along with the 7-megapixel TZ3, the DMC-TZ2 is being promoted as the ideal travel camera. It certainly has a lot going for it, with a 6-megapixel CCD, a tough all-metal body, a high resolution 2.5in monitor and a big image-stabilised 10x zoom Leica-branded lens with a focal length equivalent to 28-280mm. It is available in either silver or black. The TZ2 will go on sale in April with a recommended retail price of £269.99, but is already available for pre-order from a number of retailers at prices as low as £226.


There aren’t many digital cameras on the market that can equal the TZ2’s specification. The closest matches are the Ricoh Caplio R4, which has a 28-200mm stabilised lens and costs around £160, the 12x zoom Kodak EasyShare Z612 for £195, the Canon PowerShot S3 IS with its 12x zoom for around £270, or Nikon’s disappointing 10x zoom twist-body S10, which is also around £270, although none of these last three have that important 28mm wide-angle setting. The TZ2 and its twin the TZ3 have the widest zoom range of any camera of their size currently on the market. 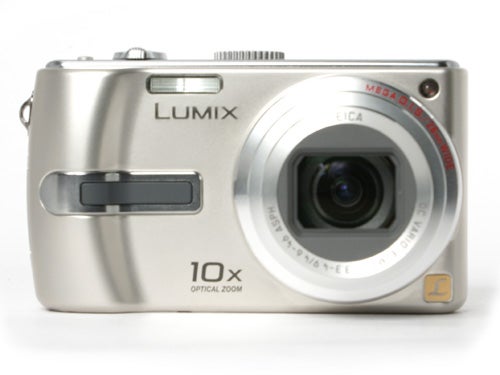 Considering the size and power of the lens the TZ2 is quite slim and sleek in appearance, although it is by no means a small camera. Measuring 105 x 59.2 x 36.7 mm and weighing a chunky 247g including card and battery it is too big and heavy to be considered pocket-sized, but then that’s why we have camera pouches.


Of course all that extra bulk does mean that there’s plenty there to grab hold of, and the TZ2 does have very good handling. The right-hand end of the case is sculpted into a small but comfortable handgrip, which carries round onto the back where it is joined by a small textured area for your thumb. There are only the barest minimum of controls on the back, so there’s nothing to get in the way.

This scarcity of external controls reflects the TZ2’s essential simplicity. It is really just a simple point-and-shoot snapshot camera, although it does have one or two clever features to help your snapshots turn out well. However it also has a few features that may have just seemed like a good idea at the time.


The main mode dial on the top plate bears a ring of symbols, and the meaning and function of some of them are far from obvious, even with the helpful new on-screen display that shows changes to the mode dial. Fortunately the TZ2 comes with a decent 94-page printed manual, so it’s easy to discover that the notepad-and-pen symbol represents the clipboard mode, in which one can shoot low-resolution pictures that are stored temporarily in the camera’s 12.7MB of internal memory, and can be instantly reviewed at the touch of a button. Why? That’s anyone’s guess. 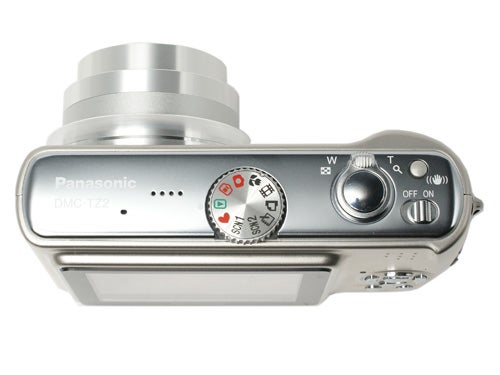 Also rather puzzling are the two scene mode settings. I suppose the idea is that if you need to alternate quickly between say the sunset and sports scene modes, you can use these two dial positions to switch between them. The problem is that they don’t take you directly to the selected mode, but instead both take you to the same scene program menu, so the time saving is minimal at best.


Fortunately the other modes are rather more useful. The red heart-shape on the dial is the Simple mode, in which virtually all user control is eliminated, useful if you’re in the habit of lending your camera to the kind of person who finds light switches terrifyingly complicated. The menu is reduced to just four entries, and even changes its appearance to a delicate pastel blue, so as not to frighten anyone of a delicate disposition.


In the standard shooting mode there is thankfully a little more control available. White balance, ISO setting, aspect ratio, image resolution and compression quality can be quickly adjusted via the small “Func” button, while flash mode, self timer (2/10 sec) and exposure compensation are controlled via second functions on the D-pad. The “Func” button options are repeated in the main menu, along with adjustments for the metering mode, AF mode, burst mode and other typical camera settings. 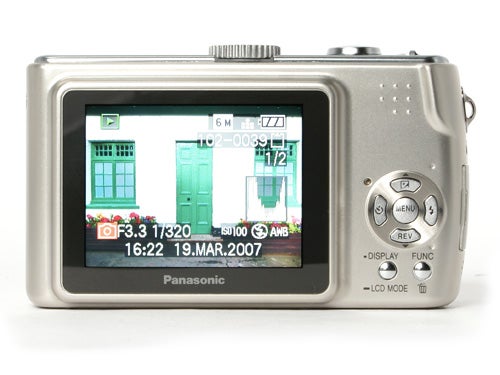 There is one other mode dial setting that is both unusual and useful, and this is the “Intelligent ISO” mode. This is used in conjunction with the Mega OIS image stabilisation system to ensure blur-free pictures by setting a higher than usual ISO speed, although it can be limited to 800 to reduce the effects of image noise.


Also on the mode dial is the movie setting. The TZ2 can shoot in both 640 x 480 and 848 x 480 widescreen at 30fps, with a 1GB card providing just under 10 minutes of shooting time. The zoom lens cannot be used while filming, although the zoom setting can be changed between shots.

General and still shooting performance is surprisingly good for a super-zoom camera. It starts up in about two seconds, and shuts down again in about the same. In single-shot mode it can take a picture roughly once every three seconds, but in continuous mode this speeds up and it can manage a shot every 1.3 seconds until the card is full, which isn’t at all bad. A 1GB SD card provides enough space for approximately 334 shots at full resolution. The AF system isn’t the fastest I’ve seen but it’s by no means slow, focusing reliably in good light in under a second. It slows down a little in low light, but still performs well thanks to a powerful AF assist lamp with a range of several metres. The range of the built-in flash is a respectable 4.2m at wide angle, but it struggles to fill the corners of the frame at this setting.


As I’ve noted before, the Panasonic Mega O.I.S. optical image stabilisation system is one of the best on the market, and reliably adds two to three stops of extra hand-held stability in low light conditions. 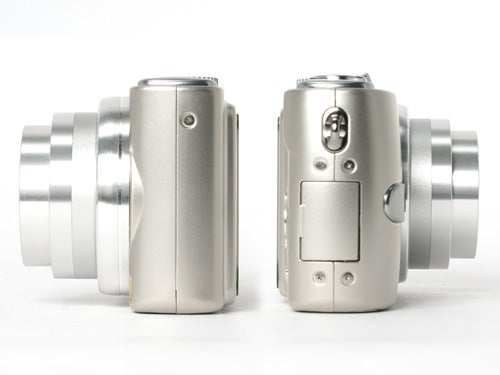 One unusual feature of the TZ2 is its ability to shoot in 4:3, 3:2 or 16:9 aspect ratios, with maximum image sizes of 2816 x 2112, 2976 x 1984 and 3072 x 1728 respectively. The CCD has a total size of 7.39MP, much bigger than usual for a 6.0MP camera, and some of this extra size may be used to accommodate the increased width of the wider formats while maintaining the same total pixel count. The available technical information on the camera was not clear on this.


Finally we come to picture quality, and this is where I have previously had the harshest criticism of some Panasonic cameras. In the case of the TZ2 however I found much that I liked, especially the superb lens. It’s the first time I’ve seen a compact super-zoom lens with a 28mm-equivalnet wide-angle that also has no barrel distortion whatsoever at wide angle. Not only that but it has excellent corner-to-corner sharpness with no trace of chromatic aberration. In fact I’d go as far as to say that it may be the best long-zoom lens I’ve ever seen on a compact camera, and one that lives up to its Leica badge. 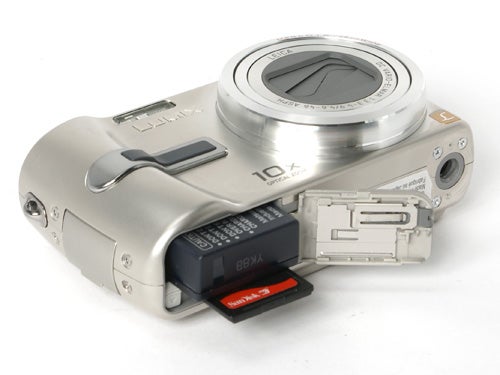 High ISO noise control has also previously been a problem for some Panasonic models, but the TZ2 is limited to only 1250 ISO, and at this level noise is very well controlled. There are some flecks of colour distortion visible even at 400 ISO, but I think these may be the result of the one image quality problem that the TZ2 does have: excessive image compression. At maximum quality the image files average only around 2.4MB, quite small for a 6MP camera, and there are compression artefacts visible on many shots, especially on areas of plain tone such as the sky. This is a real shame, because it wastes the potential of that excellent lens, and is a flaw in what is otherwise a very good camera.

Panasonic’s claim that the TZ2 is the ideal travel camera has plenty to back it up. Build quality, handling and design are all first rate, and overall performance is well up to scratch, including in low light conditions. The superb quality and useful zoom range of the lens and the good high-ISO noise control should produce excellent picture quality too, but they are slightly let down by harsh file compression. 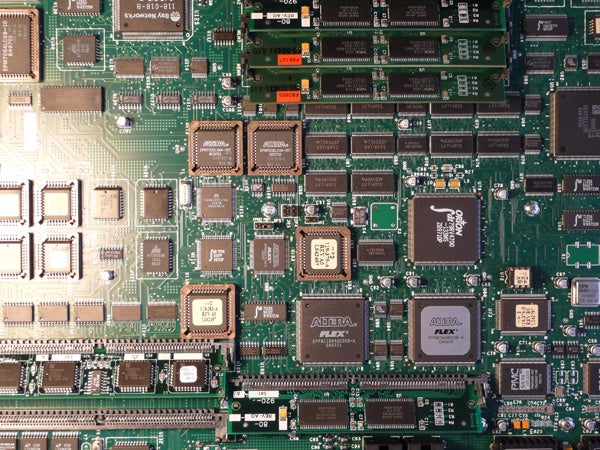 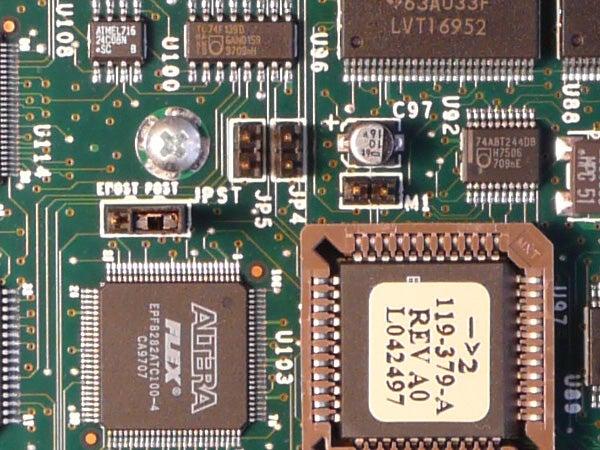 At the minimum 100 ISO the image is sharp, clean and well detailed. 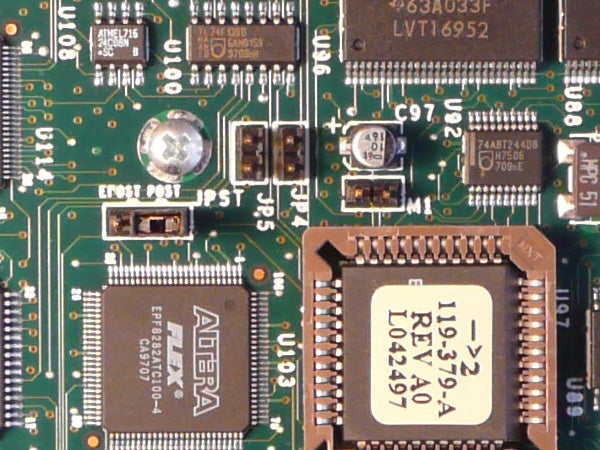 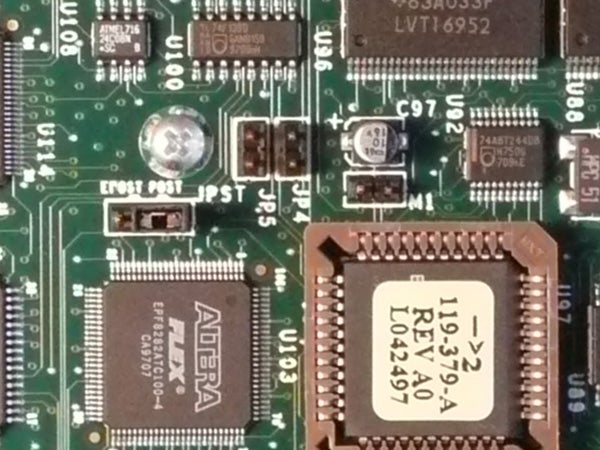 Image quality is still excellent at 400 ISO, although some flecks of colour distortion are visible on some images at this speed. 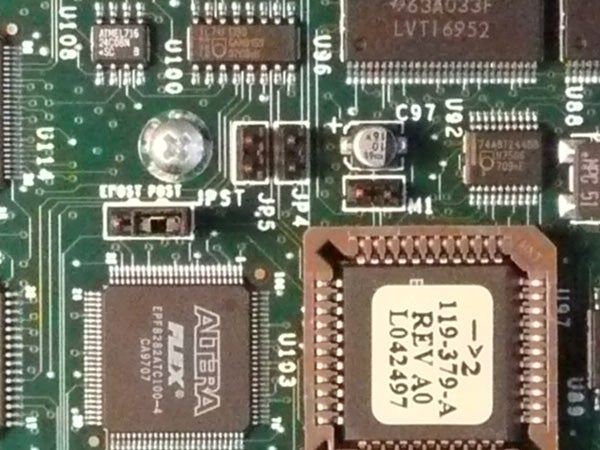 At 800 ISO there is a noticeable reduction in image quality, but the overall noise levels are still very good. 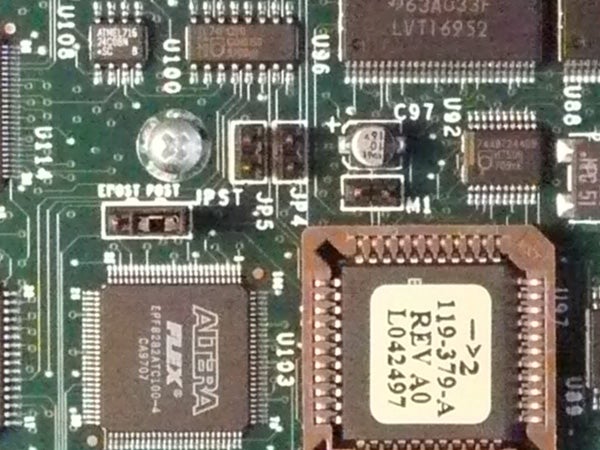 Even at the maximum 1250 ISO there is little visible noise, and the image retains a fair degree of fine detail.

”A range of test shots are shown over the next two pages. Here, the full size image has been reduced for bandwidth purposes, and a crop taken from the original full resolution image has been placed below it in order for you to gain an appreciation of the overall quality.


Full-sized versions of some of the following images can be downloaded by clicking on the sample shots as indicated. However be aware that the average file size is around 2.4MB, so those on very slow connections will experience some delay.” 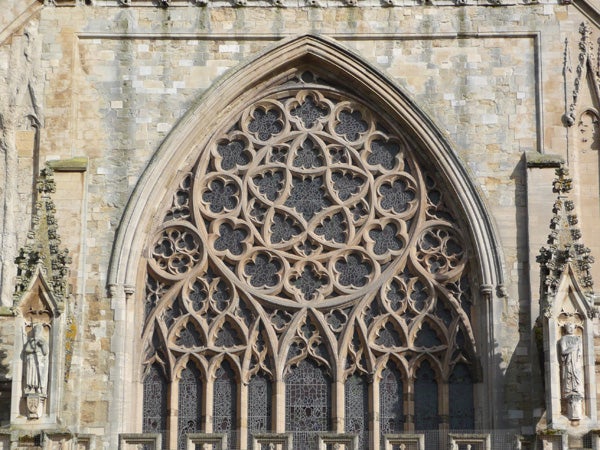 In case you missed it in the last review, here’s another shot of the front window of Exeter cathedral for detail comparison. See below for a full-res crop, or click to download. 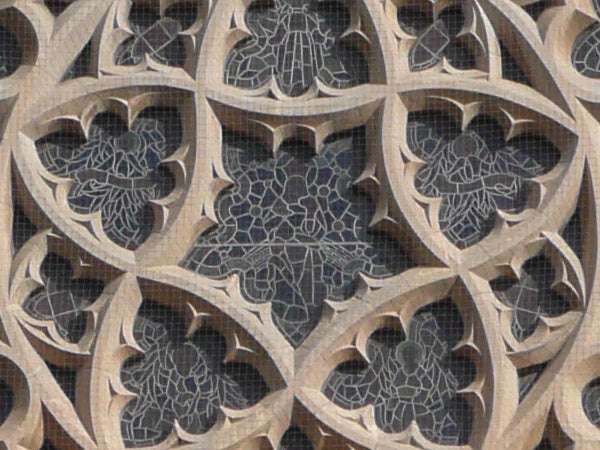 Compare this with similar shots from other reviews of 6MP cameras. The level of fine detail is very good, although the aggressive image compression has done it no favours. 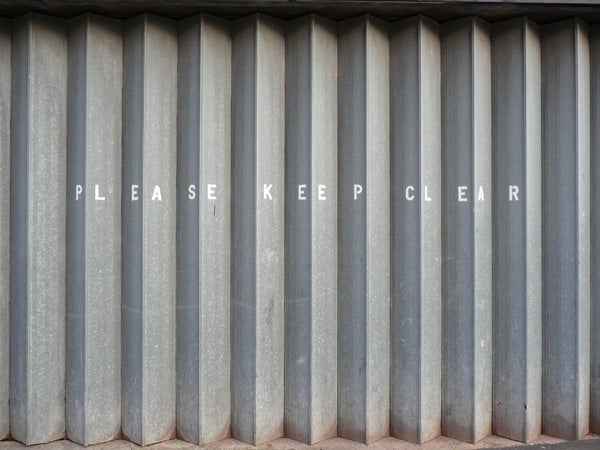 The TZ2’s remarkable lens produces no barrel distortion at all, even at its widest setting. This is the best I’ve seen from a camera of this type. 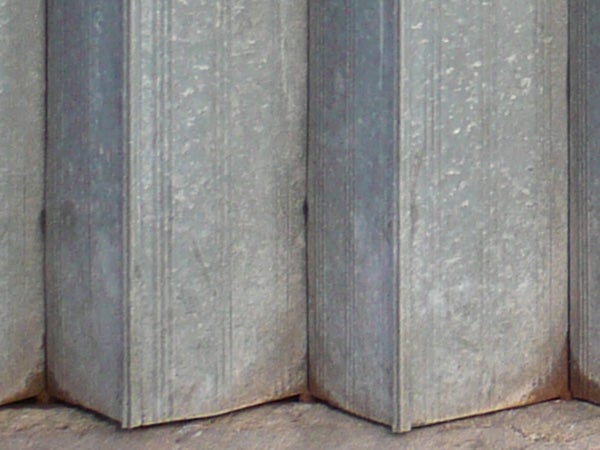 This is a crop from the bottom left of the above picture, showing excellent corner sharpness and zero chromatic aberration. 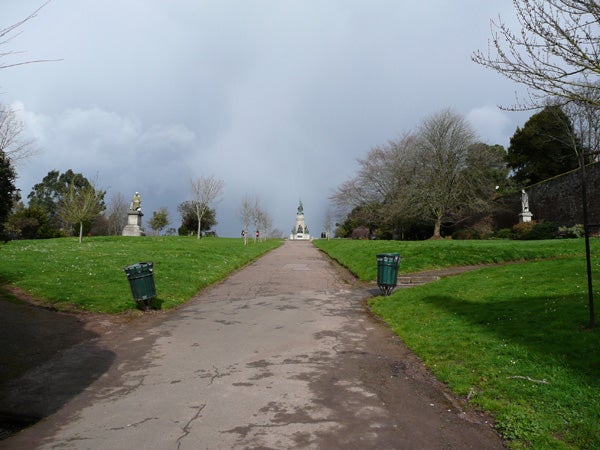 The 28mm-equivalent wide-angle setting is a real bonus not found on many compact cameras. 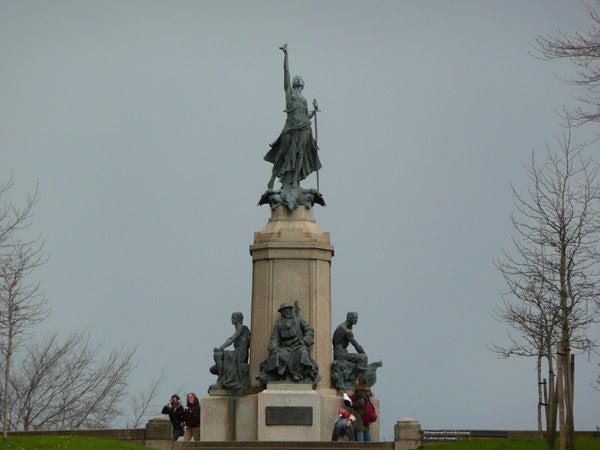 Taken from the same position as the above shot, this demonstrates the power of the telephoto end of the TZ2’s 10x zoom lens, equivalent to 280mm. 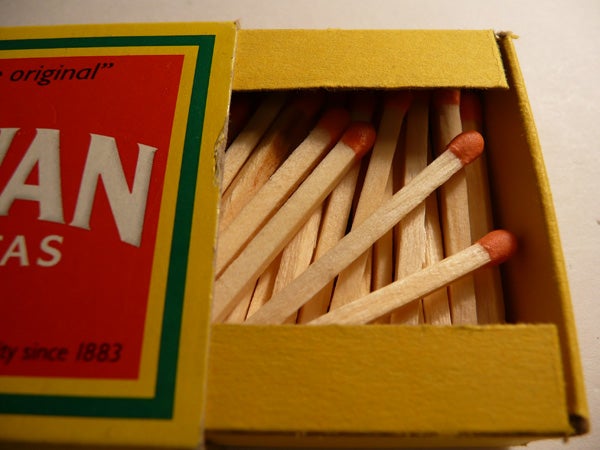 The TZ2 has a 5cm macro range. 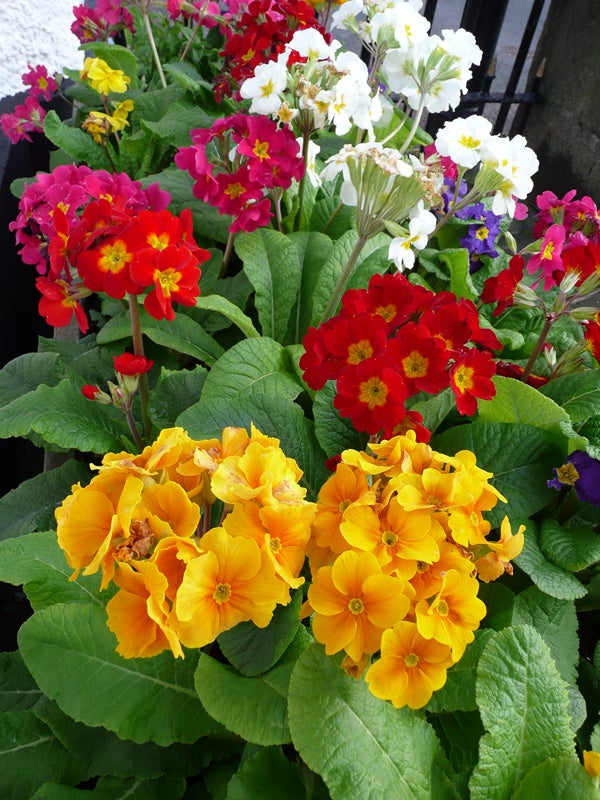 It’s almost spring again, and the flowers are out. Lovely colour rendition, but a pity about that over-exposed wall in the top corner though.