Over the course of a year, I review around 100 digital cameras, maybe one or two more or less, but quite a lot by any standard. Naturally some are better than others. Some are hopeless rubbish and some are really good, but it’s only a couple of times a year that a camera comes along that really stands out from the crowd. The Panasonic Lumix LX3 is one of those cameras. 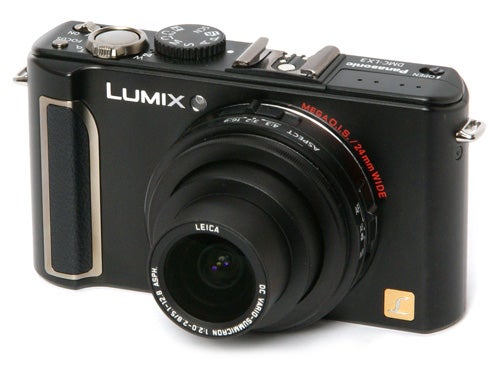 I was first introduced to the LX3 at a lavish press launch held in Monaco earlier this year. While there I had a chance to try a pre-production sample of the camera, and I was immensely impressed by it. I’ve been looking forward to getting my hands on a production model for a full review, and so for the past week I’ve been out and about putting the LX3 through its paces. I have not been disappointed; it’s every bit as good as I remember.


The top model in Panasonic’s compact camera range, the Lumix LX3 is a high-spec compact camera aimed primarily at enthusiast and semi-professional photographers. Its many features include a 10.1-megapixel sensor of the larger 1/1.63-inch type, Venus Engine IV image processing, a very high quality F2.0 – F2.8 Leica-branded 2.5x zoom lens equivalent to 24-60mm, a 3.0-inch monitor with 460k dot resolution, a full range of manual exposure and metering options, and can shoot in Raw mode. 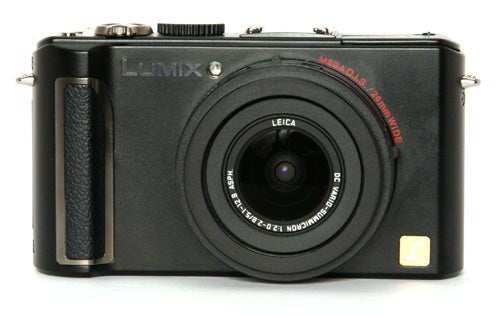 Even with such an impressive specification the LX3 may seem expensive at around £300, however it’s worth pointing out that the essentially identical Leica D-LUX 4 costs nearly twice as much, at around £570. The LX3 doesn’t have a lot of competition at this end of the market. It will find itself on the same page of the catalogue as the Canon PowerShot G10 (£370), the Nikon CoolPix P6000 (£340) and the Ricoh GR Digital II (£399), and against those that £300 doesn’t seem so expensive anymore. Of course you can get an entry level DSLR for less, but then the LX3 isn’t competing with a DSLR.

The LX3 is no ultra-compact, but considering its specification it’s surprisingly small. It measures 109 x 62 x 45mm with the lens retracted, or 70mm with the lens extended, and weighs 264g including battery and card. The body is comfortable to hold thanks to a nice finger grip on the front (not present on the Leica version) and a small textured thumb grip on the back. It will fit easily into a jacket pocket, but like most serious cameras it comes with a good quality neck strap, and there is an optional and rather retro-looking leather case. 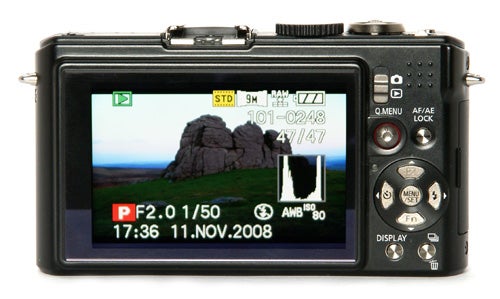 Handling the LX3, it’s impossible not to be impressed by its clever design, solid build quality, slick performance and general feeling of competence. It really is an extremely enjoyable camera to use, and while it is complex it isn’t particularly complicated. Some people may have a problem with the small joystick-like control that operates the Quick Menu, however once you get used to it, it is very quick and easy to use.


The main menu is also comprehensive. The main picture control setting is the Film mode, which offers a number of presets, including three monochrome settings, all of which can be customised for contrast, sharpness, saturation and even noise reduction. Naturally the LX3 has multi-zone, centre-weighted and spot metering, and also has a wide range of AF modes, including a manual spot AF. Like most top-end cameras, particular setups can be saved and assigned to two custom settings on the main mode dial. Although it’s a comparison that I would normally dismiss, I have to say that the level of user control offered by the LX3 is not far short of that of a good digital SLR. I particularly like the three position aspect-ratio switch on the top of the lens barrel. I found myself switching aspect ratios to suit the subject far more often that I normally would, with good results.

While the limited 24-60mm zoom range might sound like a restriction, in fact it’s just right for general purpose scenic photography, and anyway the superior speed of the F2.0 – F2.8 maximum aperture more than makes up for it. That’s around two stops faster than many compact camera zoom lenses, and combined with the excellent optical image stabilisation system it means fewer blurred shots. For those times when 24mm just isn’t wide enough, a 0.75x wide conversion lens is available.


Other features include Raw mode, as well as two Raw + JPEG settings. However it’s worth noting that even the latest version of Adobe Camera Raw does not yet recognise the LX3’s Raw files, so you’ll have to convert them using the supplied software.

In terms of overall performance, the LX3 is quietly impressive. It starts up in a little over two seconds, and in single-shot mode at maximum JPEG image quality it has a shot-to-shot time of approximately 1.7 seconds, which is fairly impressive when you consider that it’s moving files averaging about 5MB each. Even more impressively, shooting in the Raw mode with its 11.5MB files the LX3 can maintain a shot-to-shot time of 1.8 seconds, and even in the Raw + Fine JPEG setting it can manage a shot every 2.3 seconds. I’ve used some DSLRs that can’t shoot that fast. 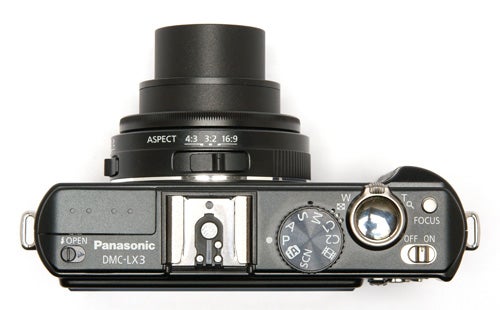 The autofocus system is also extremely impressive, both for its speed and for its amazing low light ability, which is among the best I’ve ever seen. It has a small and not terribly bright AF assist lamp, but even so it is able to focus in almost total darkness seemingly as fast as it does in daylight.


The LX3 has a distinctive pop-up flash which is surprisingly powerful for such a small unit, with a wide-angle range of over eight metres at auto ISO setting. It is bright enough to provide shadow fill-in even in very bright sunlight, but is also very well metered so it doesn’t burn out close-up highlights.


The Leica-branded lens is simply fantastic, producing virtually no distortion or chromatic aberration, although to be fair some of that is achieved during processing. Nonetheless images are pin-sharp from corner to corner, with an amazing level of detail. The LX3’s sensor is of the larger 1/1.63-inch type, the largest normally used in compact cameras (Sigma DP1 excepted). As a result the LX3 has better than average dynamic range and outstanding colour reproduction. 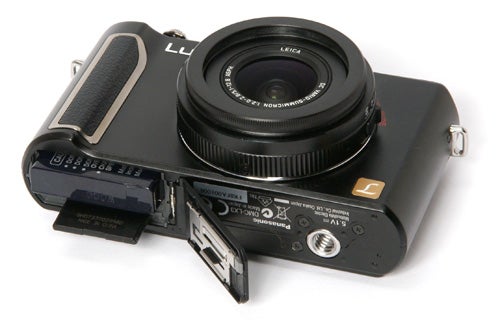 As for image quality, see the sample shots attached and judge for yourself. I’m not exaggerating when I say that the LX3 has better image quality than some DSLRs that I’ve used. Images at 80 ISO are pretty much perfect, with deep rich colour, sharp detail and no noise at all, and the quality is maintained even at higher ISO settings. It is one of the few compact cameras that can produce useable images at 1600 ISO. The auto white balance is really the LX3’s only significant problem. It does tend to produce slight tints if there’s a strongly-coloured object dominating the frame, but this can be avoided by either manual WB setting or shooting in Raw mode.

The Panasonic LX3 is one of the very few digital cameras that I would consider buying for myself. It is a superbly designed and immensely capable all-purpose compact that will satisfy any keen photographer, but is also capable of producing good results in the hands of a novice. Build quality, performance and versatility are all of the highest order, and image quality is as good as ever gets. It may seem expensive, but I think it would be money well spent. 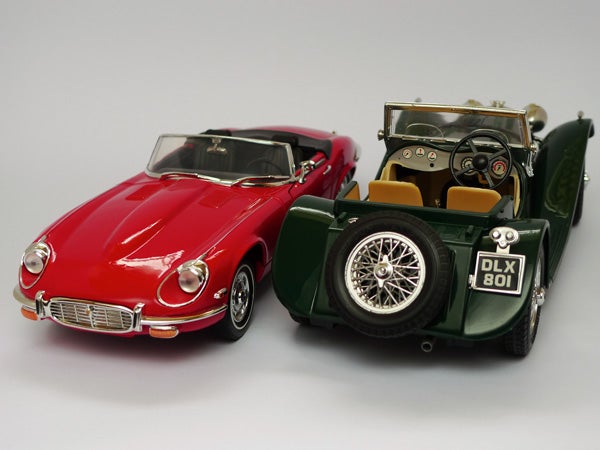 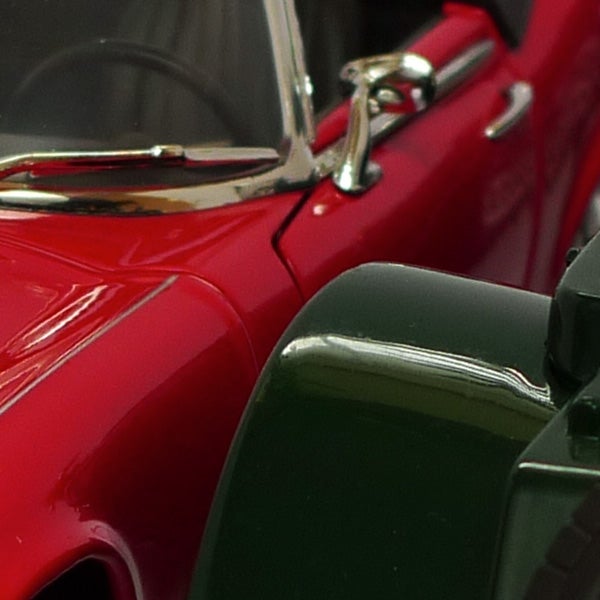 80 ISO. For future reference, this is what these cars are actually supposed to look like. There aren’t many compact cameras that can better this. 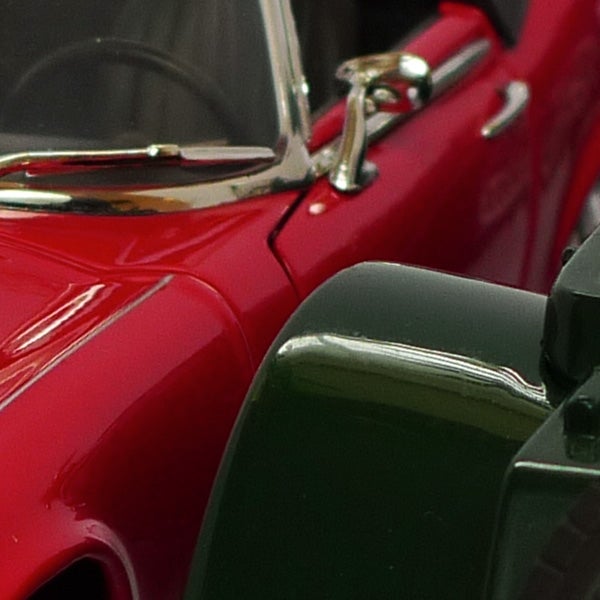 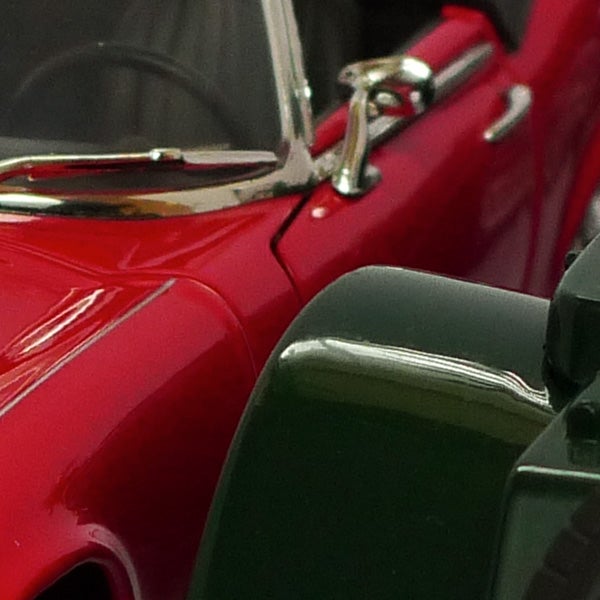 There’s a slight mottling in the mid-tone red, but still no visible noise at 200 ISO. 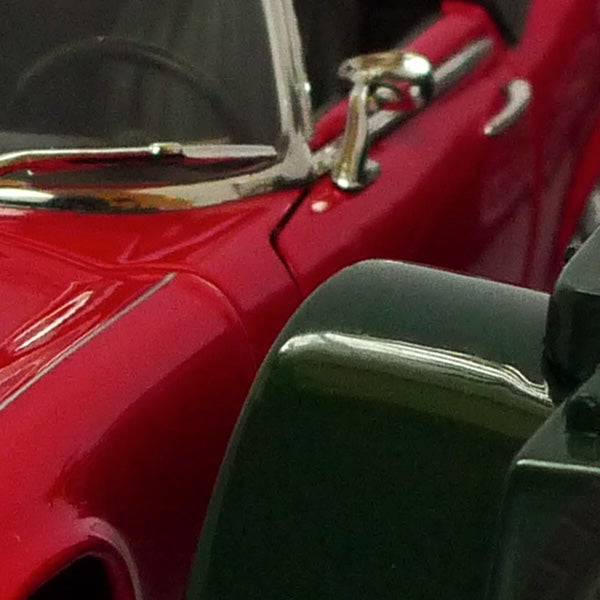 There are some small signs of noise reduction at 400 ISO, but the image quality is still better than some compacts can manage at 100 ISO. 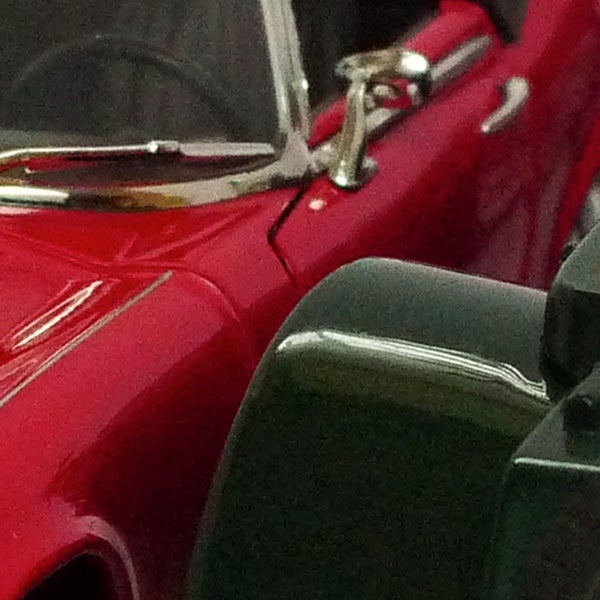 There is noise visible at 800 ISO, but it is very well handled. The colour depth and level of detail are still excellent. 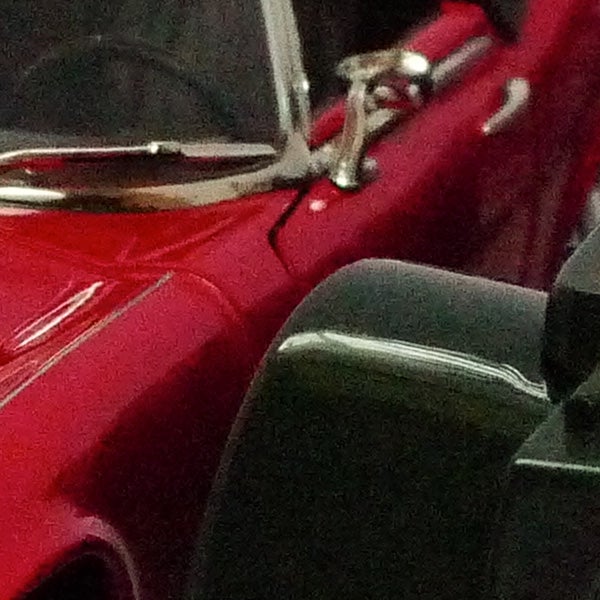 Noise is more apparent at 1600 ISO, but this shot is still good enough to make a decent print. A very impressive performance. 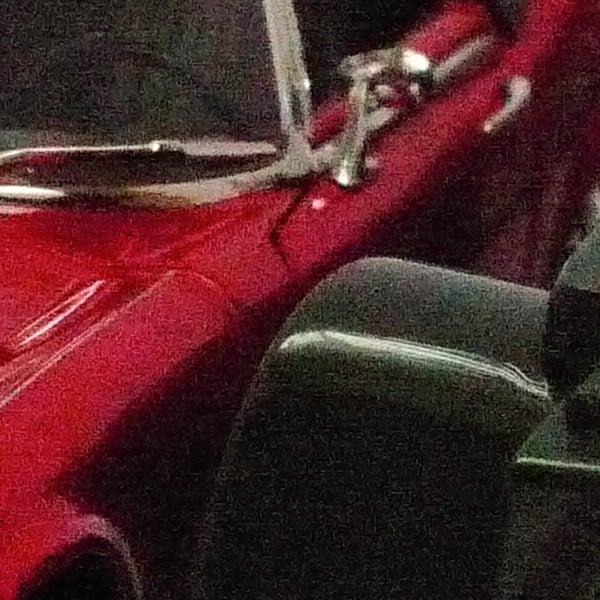 3200 ISO is a bit shabby, with some serious colour distortion, but not totally unusable for small images. 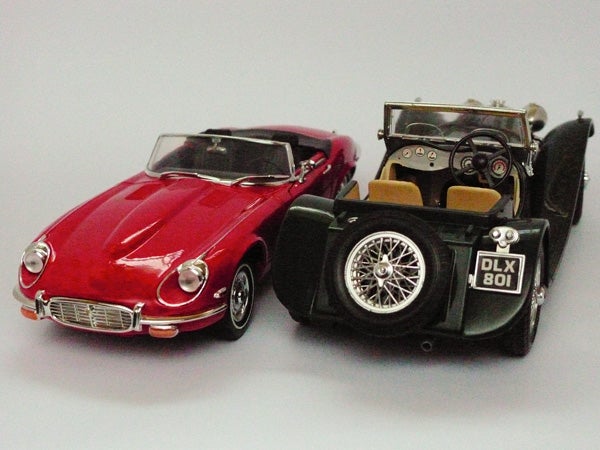 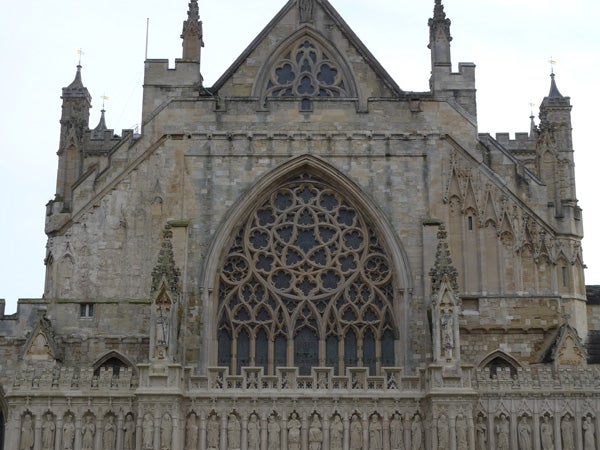 I always take my cathedral window comparison shot from the same location, zoomed in to approximately the same magnification, but unfortunately the LZ3’s 60mm maximum zoom is too wide to get the same view. Still, here’s the shot anyway. 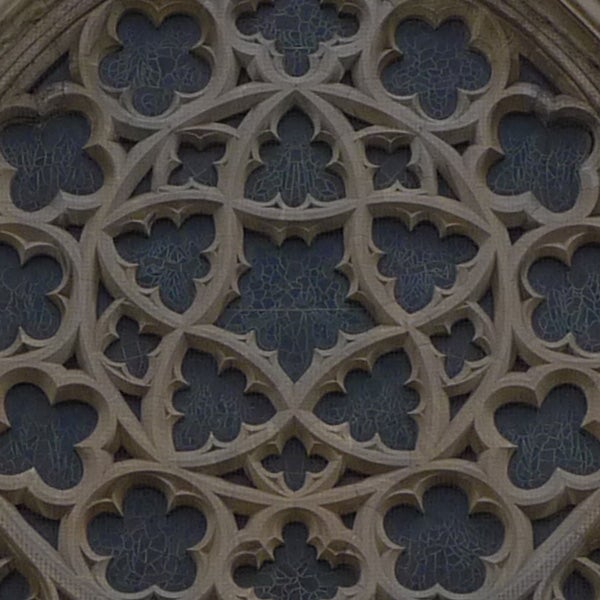 Despite the lower magnification and the overcast day, the LX3 has still captured a lot of fine detail, more than most 10MP cameras. 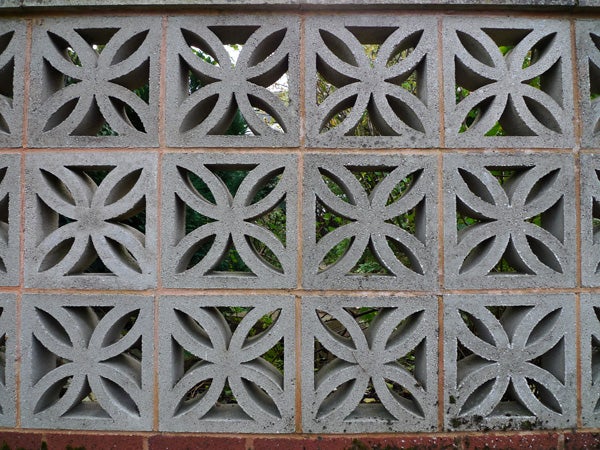 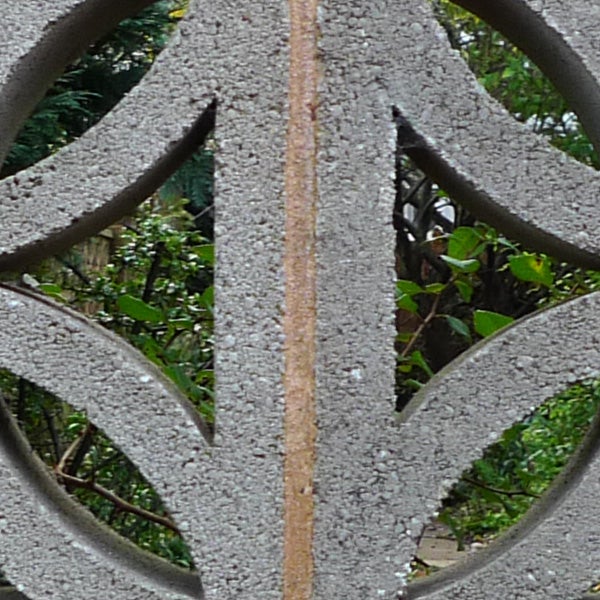 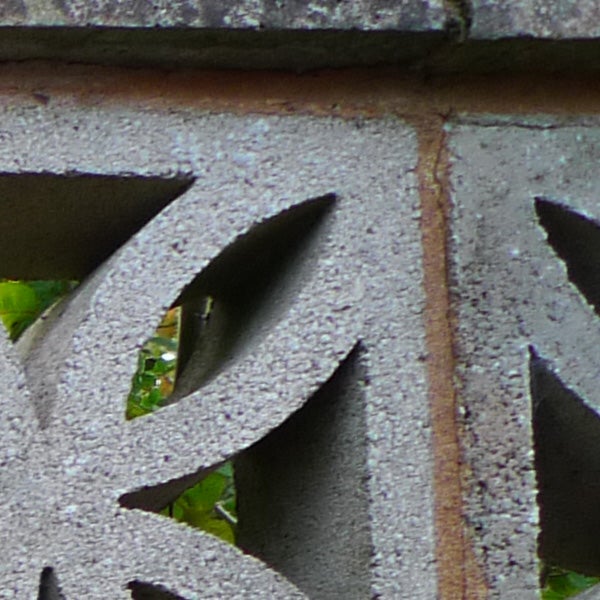 Corner sharpness is just as good, with no chromatic aberration, although that may be due to image processing. 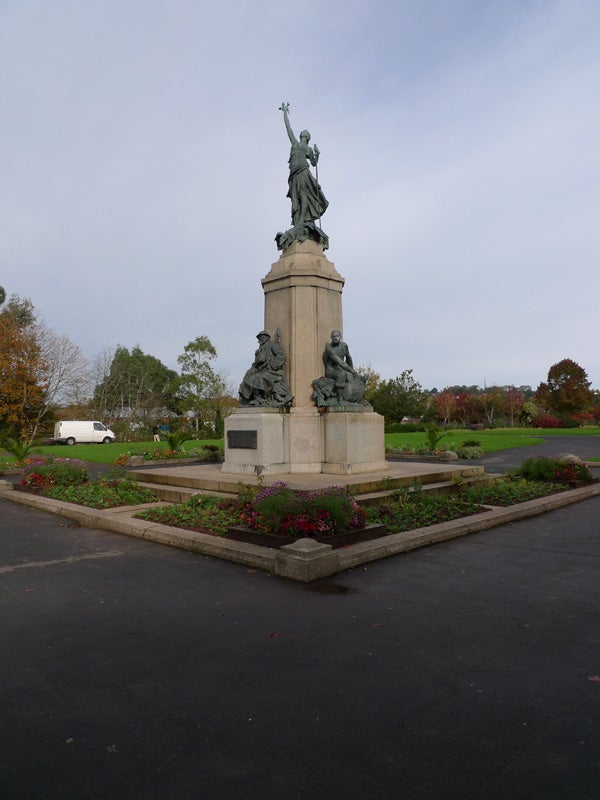 The wide angle end of the zoom is equivalent to 24mm, ideal for wide landscape shots. 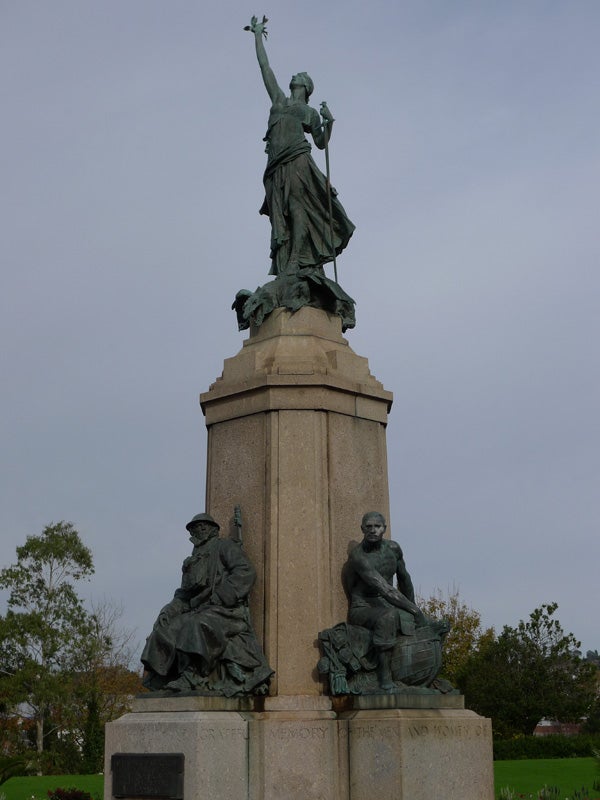 The telephoto end is only 60mm, which is barely longer than a standard lens. 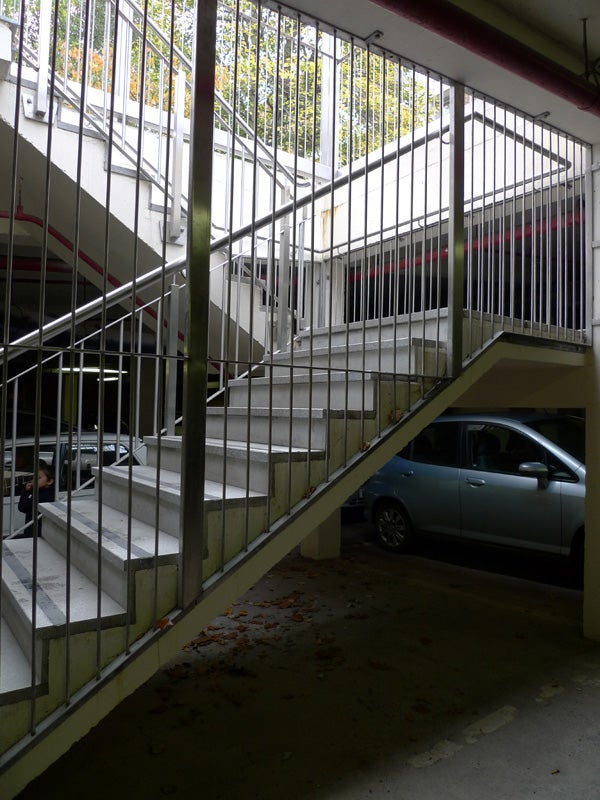 Dynamic range is excellent thanks to the larger, less crowded sensor. 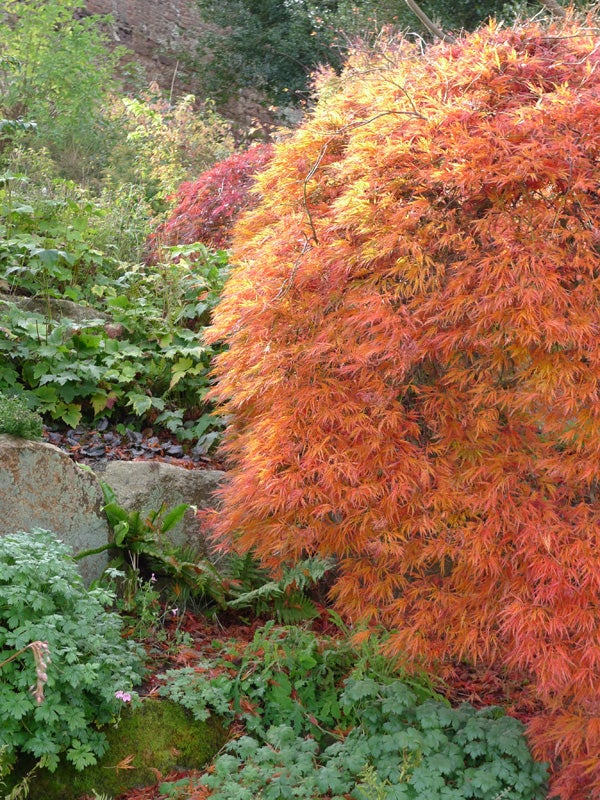 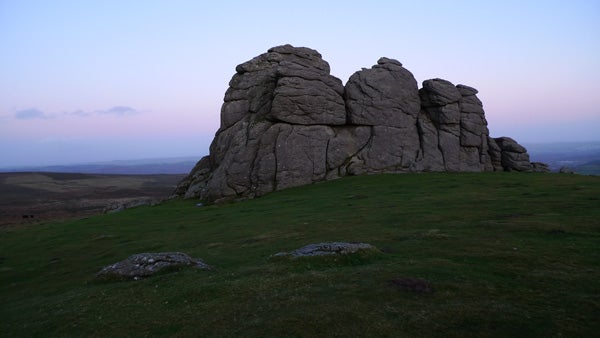 Low light performance is fantastic, and the 16:9 mode is great for landscape shots.

This is cropped from a full frame for composition, but the colours and exposure are as shot.


Here are some shots taken with a pre-production camera: 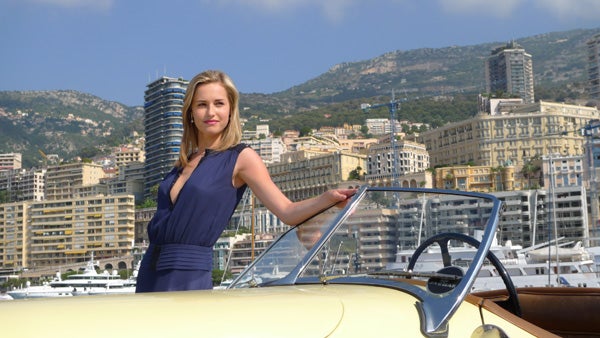 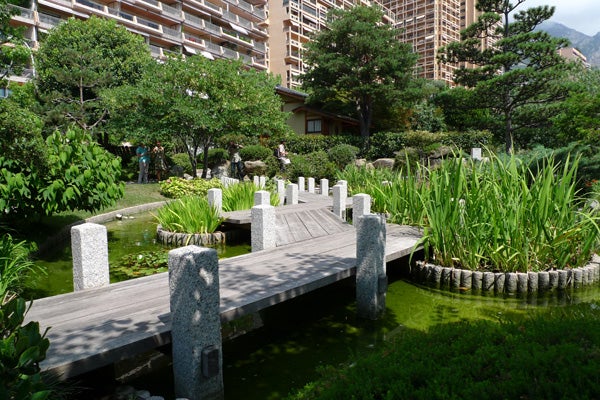