One thing about the digital camera revolution; it’s certainly opened up the photography market to companies that previously would only have touched a camera to take their holiday snaps. As shown by the examples of Sony, Casio, Samsung, Epson and HP, companies that previously specialised in home and office electronics have been able to carve out very respectable chunks of the market, while some traditional camera manufacturers have found it hard to compete. With several companies shedding staff by the thousand and respected brand names such as Contax and Minolta having fallen by the wayside, the camera market today looks very different than it did 10 years ago. 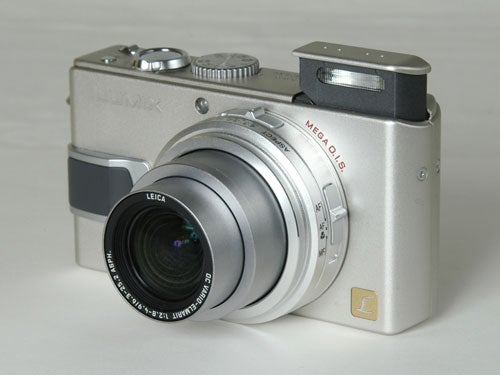 Another electronics brand that has made a name for itself in the world of digital cameras is Panasonic, better known for quality hi-fi components and televisions., Panasonic entered the digital camera market in 2001 in partnership with legendary German camera maker Leica, and since then has turned out a successful series of high quality cameras that have positioned themselves near the top end of their respective market sectors.


The Lumix DMC-LX1, launched toward the end of last summer, is a high-end zoom compact which is aimed squarely at the field dominated by the Canon S series. It features a superb 4x optical zoom Leica DC Vario-Elmarit lens equivalent to a 28-112mm lens on a film camera, and a maximum aperture of F2.8-F4.9. It also has an innovative 16:9 widescreen 8.4 megapixel CCD and Panasonic’s proprietary Optical Image Stabilization system, Mega OIS. Naturally all this technical and optical sophistication comes at a price, and the LX1 will cost you a hefty £449.99 on the high street, or around £330 shopping online. It’s a lot of money, but it compares well with the reigning king of power compacts, the Canon PowerShot S80 at £498.99. 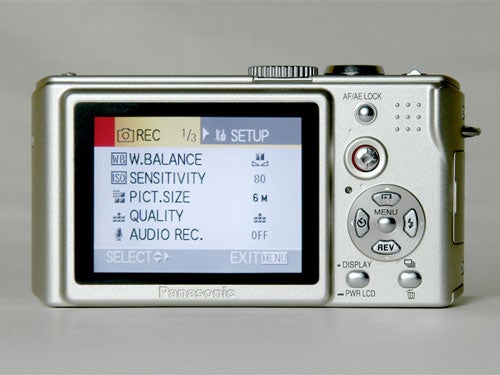 There’s no denying that the LX1 is a very nice looking camera. Available in either black or a sort of metallic champagne colour, it is well put together, with a strong aluminium shell and firmly mounted metal controls. It has an unusual slider switch for main power, a nine-position dial on the top panel for selecting the main exposure mode, while zoom control is via a collar around the shutter button.

Start-up time is a respectable two seconds, while continuous drive mode can fire off five shots in about 2.5 seconds, although there is then a pause of about eight seconds while those shots are saved to the memory card. Another slider switch on the top panel pops up the built-in flash, which is quite a powerful unit with a maximum range of four metres at wide angle, although I did find that it was inclined to burn out subjects at close range. 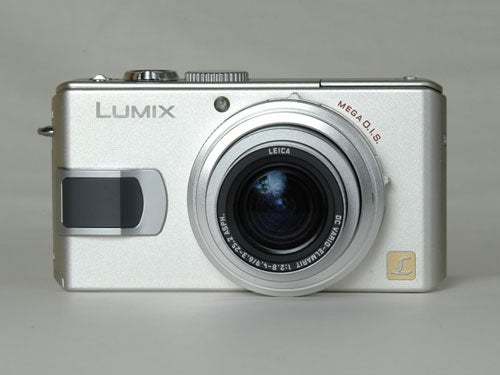 The designer at Panasonic seems to have a liking for a kind of high-tech art-deco styling, slightly reminiscent of old Leica rangefinder cameras from the 1930s. This retro look extends to having some of the camera controls mounted on the lens barrel, specifically the focus mode selector and the aspect ratio control. This latter option isn’t unique; there are several other cameras on the market that offer the 16:9 widescreen format, but Panasonic is the first to actually use a widescreen sensor. In most other widescreen cameras, a 4:3 sensor is cropped top and bottom to fit the 16:9 aspect ratio, wasting pixels, but in the LX1 the sensor has a maximum resolution of 3840 x 2160 pixels, all of which is used in the widescreen mode. If you choose the 4:3 or 3:2 aspect ratio the image is cropped at the sides. Combined with a 28mm-equivalent lens this makes the LX1 ideal for high-resolution panoramic landscape shots. It can also record widescreen movies with a resolution of 848 x 480 pixels at 30fps. 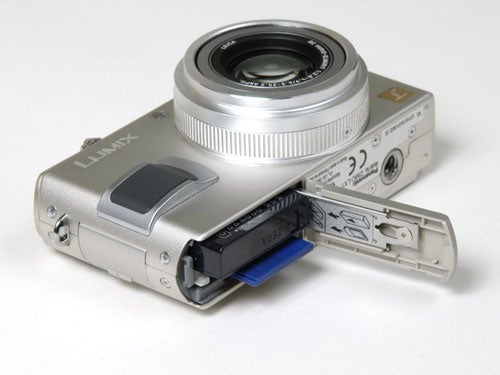 The Mega OIS anti-shake system has appeared on several other Panasonic cameras, and I’ve found it to be quite effective. It’s not quite as good as Nikon’s VR system, or the moving CCD system that Konica Minolta was using, but it does provide at least an extra couple of stops of hand held shooting in low light.


Another small innovation on the LX1 is a four-way joystick separate from the usual menu navigation D-pad. This additional control is used exclusively for adjusting exposure settings in manual, aperture priority or shutter priority modes. It works well enough, but if there had to be a separate control I would have preferred a small input dial, like the rotary control on the Canon S80.

The other stand-out feature on the LX1 is a big 2.5in LCD monitor, although oddly this is in 4:3 format. In 16:9 mode it has letterbox bars top and bottom. The screen has a resolution of 207k pixels, which is excellent for a screen of this size, although it could do with a somewhat faster refresh rate – there is a noticeable lag between moving the camera and the view on the LCD catching up with it.

In terms of picture quality, the LX1 comes very close to being superb, but it does have a few annoying flaws that really let it down. The resolution of the big 8.4MP sensor is excellent, and there’s no doubt that the 16:9 format works extremely well for a wide variety of subjects. The AF system is a little on the slow side, especially in low light, but it is usually accurate, as is the multi-point metering system. Colour rendition is very good, and it almost goes without saying that the Leica lens provides outstanding edge-to-edge clarity and a minimum of barrel distortion even at wide angle.


Where the LX1 falls down is on its image processing. Even in the lowest compression JPEG mode, images display a higher than usual degree of compression artefacts, leading to a speckled appearance on large areas of plain colour, such as a blue sky or the bodywork of a car.


The LX1 does have a RAW mode, and using this it is possible to reduce the sharpening and noise reduction and produce a much smoother result, but each shot in RAW mode takes 16 seconds to write to the memory card, so it’s not really practical in most situations. 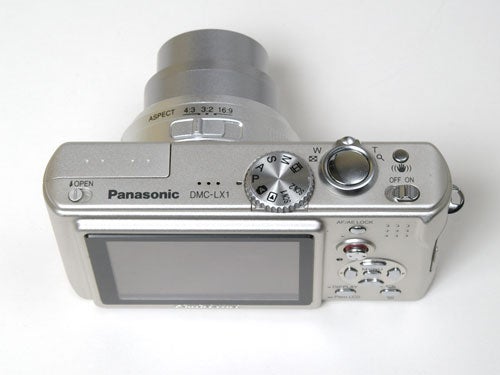 I also found a major problem with image noise. Even at the minimum 80 ISO, long exposure shots (one second or longer) showed noticeable image noise, and at higher ISO settings the problem became far worse. At 400 ISO with an exposure of 1/5th of a second image noise was among the worst I’ve seen on a recent camera.


All in all, the Panasonic LX1 is a mixed bag. Under normal circumstances it can produce very good pictures, but it isn’t really up to the kind of quality that a professional or even a quality-conscious amateur will be looking for.


The Lumix DMC-LX1 is an interesting camera, with several nice features and the ability to take a decent picture, but its image quality isn’t really high enough to compete in the kind of market that its price would suggest. For £100 less it would be a bargain, but there are better cameras around for less. 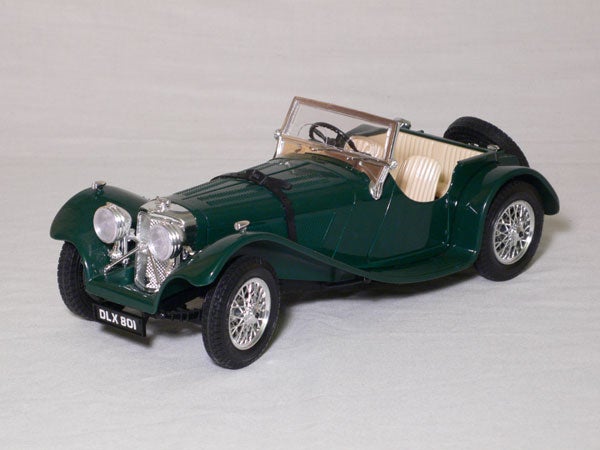 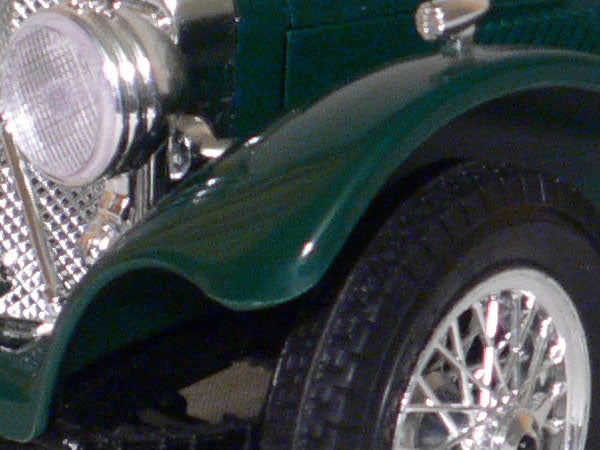 With a 1 second exposure at F4.9, this shot at the minimum 80 ISO setting shows signs of image noise, with distinct colour speckling in the darker areas. 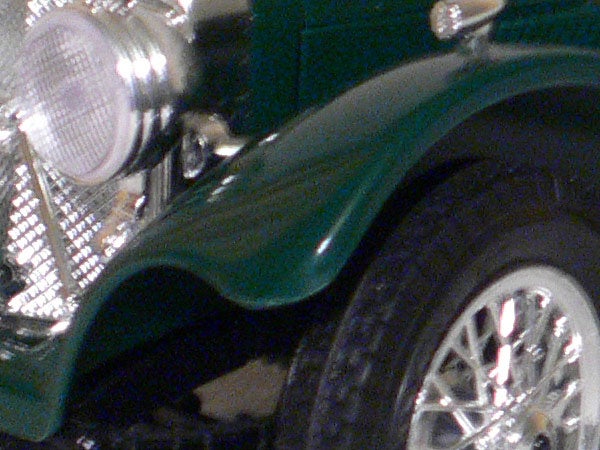 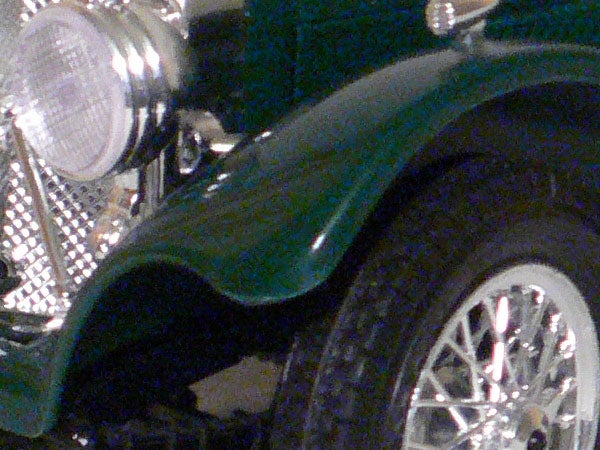 At 200 ISO and a shutter speed of 0.4 secs there is a great deal of image noise right across the image, and the colours are badly distorted by speckling. 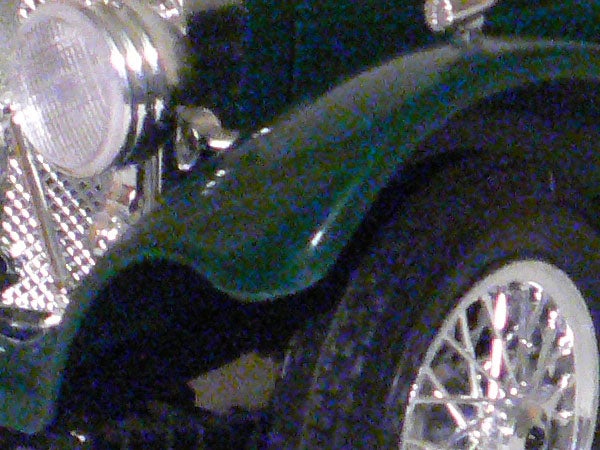 At 400 ISO the image is virtually unusable, and is one of the noisiest I’ve seen recently. 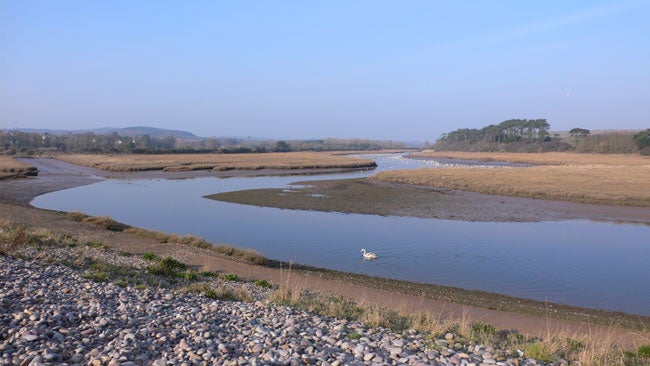 This is the kind of shot the LX1 was designed for, a wide-angle panoramic shot in 16:9 widescreen format. The level of detail is superb. 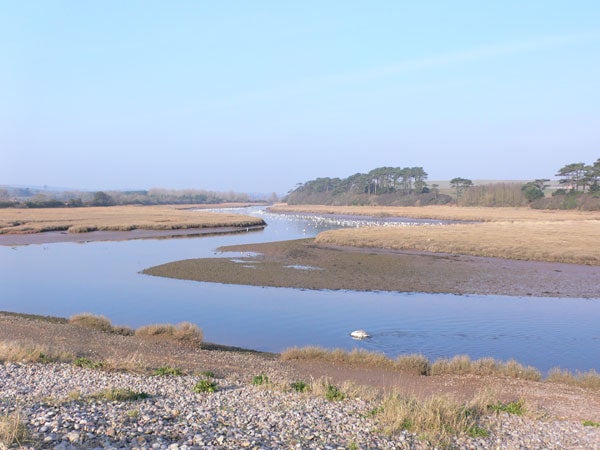 Compare this with the previous shot. In 4:3 mode it is the sides of the frame that are cropped out. 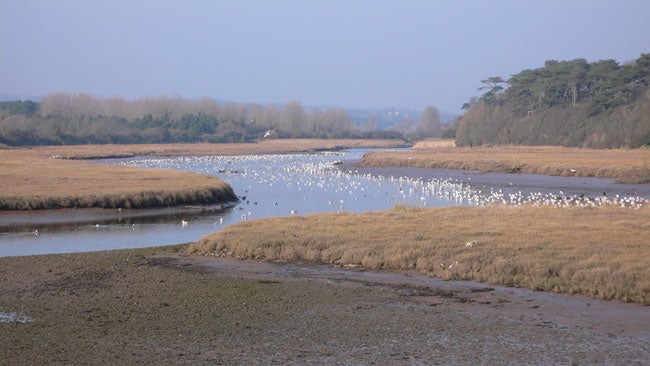 The 4x optical zoom lens gives a little more versatility than usual, and the high optical quality picks up lots of detail. 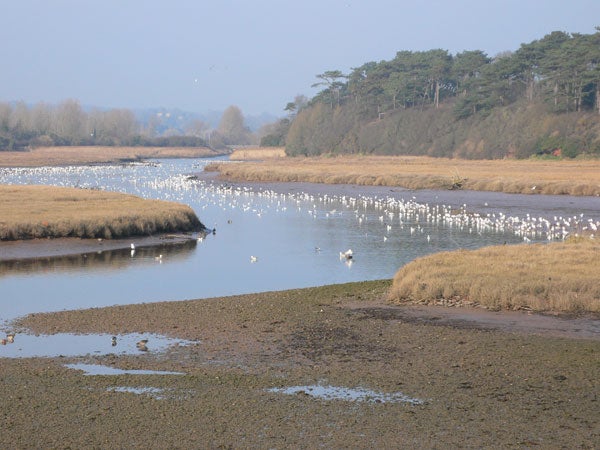 Again, the sides of the frame have been cropped. The 16:9 mode provides larger high resolution pictures. 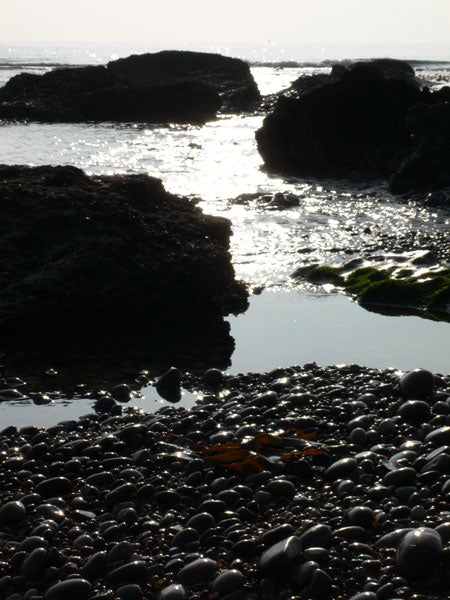 The superb Leica lens produces no flare even when shooting directly into the sun. 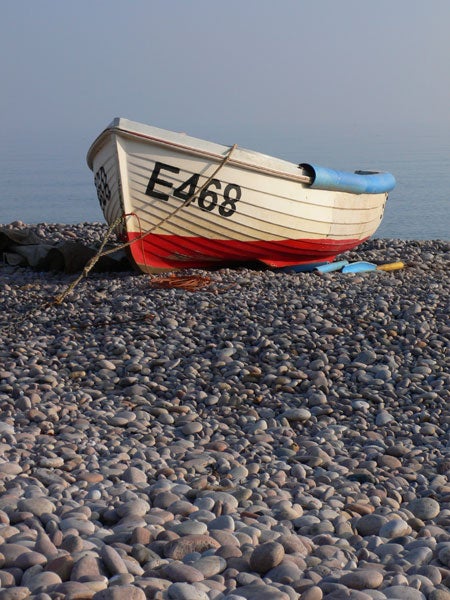 Colour rendition and exposure are excellent, but the sky shows some JPEG compression and over-sharpening. 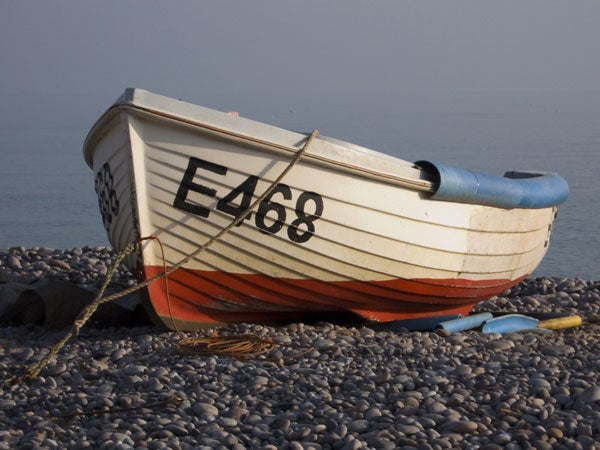 This image is converted from a RAW file using the converter software, with reduced sharpening. It is a lot smoother. 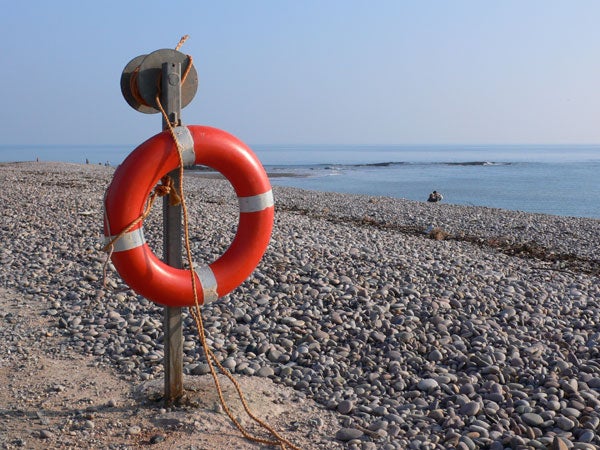 The LX1 is great for high-quality snapshots, but is limited for serious photography.