I wish it were possible to know exactly what a camera is really like just from looking at it; my job would be so much easier. Although actually thinking about it I wouldn’t have a job at all. Let’s face it, I’m here to be massively disappointed about a new camera so you don’t have to be.


Take this Panasonic Lumix DMC-FX9 for example. Seldom have I seen a more attractively designed camera. Like most of the Lumix range it looks functional but elegant, with a slightly retro and almost art deco style to it. Just 24mm thick and weighing only 155g fully loaded, it is small and light enough to slip into a shirt pocket. It is available in either black or silver. 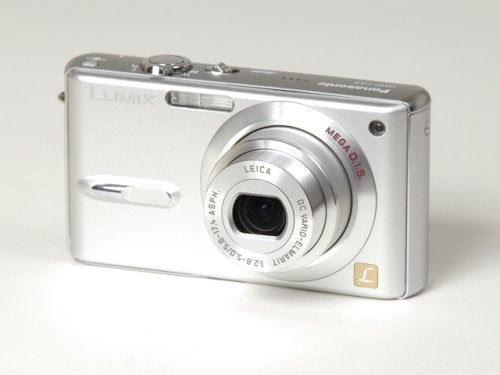 It has all the right trimmings, including a 6MP CCD and a big 2.5 inch LCD monitor which with 207k pixels is admirably sharp. It has a neat 3x optical zoom lens that folds flush with the camera body, and bears the prestigious Leica name. The FX9 is also one of the smallest cameras on the market to be fitted with an optical image stabilization system.


The design excellence extends to the controls too. The 6-position main mode dial is partially enclosed, and the on-off switch is just that; a simple slider switch. It’s easy to operate, resists accidental activation and looks good. The other controls are equally simple and well-thought-out, and the menu is also admirably simple, although its limited colour palette and non-aliased typeface do ring a few warning bells.


The FX9 is powered by a big 1150mAh Lithium-ion battery which Panasonic claims is good for 270 shots, but is actually capable of well over 300. 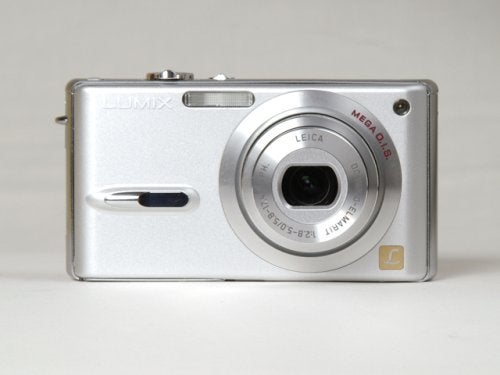 In the highest resolution and quality mode the JPEG file sizes produced are around 2.2MB, which is a bit heavily compressed for a 6MP image. However it does mean that you can fit approximately 334 shots onto a 1GB SD card.


It’s a little on the expensive side. With a high street price of £249.97 or £196.85 online the FX9 is considerably more expensive than most other current 6MP ultra-compacts, such as the Pentax Optio S6 or Olympus mju 600 (both £189) or the Casio Exilim EX-Z60 (£169). But that’s OK, because you’ve heard that Panasonic cameras are really good, so it’s probably worth the extra, right?

Performance also looks good, with a start-up time of a fraction over two seconds. Continuous shooting is not bad, with a high-speed mode that can fire off six shots in about 2.5 seconds at full resolution, a low speed mode that does the same in four seconds, and a true continuous mode that can shoot at a rate of ten frames every eight seconds until the memory card is full, although that performance may vary depending on the speed of your memory card. 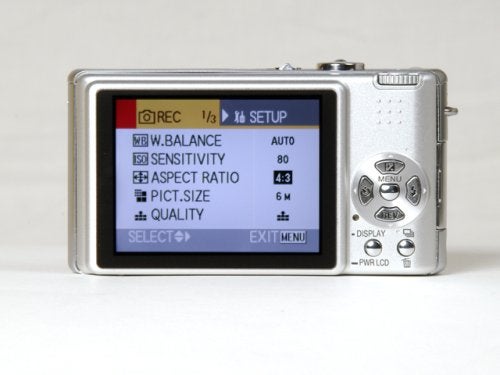 Focusing is quick, and thanks to the built-in AF illuminator it can focus in darkness at a range of several metres. Don’t think this makes it good for low-light photography though, because the built-in flash has a few problems. It is very under-powered and at 80 ISO it only has a range of 2.2 metres. The camera will try to get around this by increasing the CCD gain in Auto mode to compensate, which gives it a range of 4m, but the resulting pictures are very noisy. Fill-in flash worked well at close range though, filling in the shadows in a crowd scene nicely.


The camera has a decent range of options too, with multiple flash modes, several focus point options, 14 scene modes and of course the OIS anti-shake system, which may be a bit superfluous on a camera like this, but does at least work. The movie mode isn’t bad either, with the now standard 640×480/30fps.


Metering was generally good for most normal shots, but I did notice that it had a tendency to get things seriously wrong on shots with predominantly very light or very dark backgrounds. It is supposed to be an intelligent multi-zone metering system, but it behaved more like a fairly crude centre-weighted meter, and under some circumstances needed the repeated use of the exposure compensation function to finally arrive at a good shot. 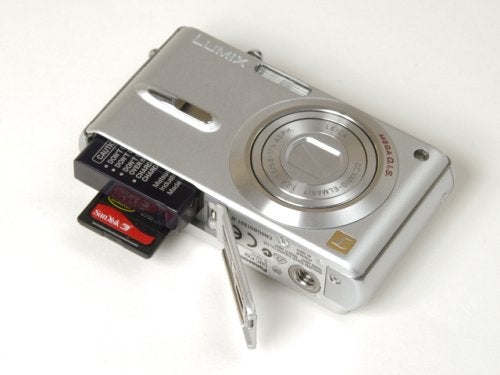 So there are a few niggles, but that’s not exactly unusual, so why am I so massively disappointed by the Lumix FX9?


When I looked at the test shots I’d taken with this camera, I was appalled by what I saw. I even checked the EXIF data for each shot to make sure I hadn’t somehow accidentally set the camera to 400 ISO. But no, there it was in the image information; the shots were indeed taken 80 ISO, but were so noisy that they looked much faster.

At the minimum sensitivity setting, on shots taken in bright sunlight and ideal shooting conditions, there was visible image noise and extensive red-green colour speckling in all the darker and mid-tone areas, while deeper shadows lacked any kind of detail. Add to this the obvious JPEG compression artefacts visible in almost every shot, some nasty purple fringing and burned out highlights in many daylight shots, and it’s clear that the image quality is pretty much a total loss. I was going to say that I haven’t seen image quality this bad in five years, but I have. I reviewed the Panasonic DMC-LZ5 in April and found the same problems. If anything the FX9 is even worse.


It’s very sad to see the illustrious Leica name attached to such a substandard camera, but in fairness the lens is probably the best part of it. It is a bit slow at f2.8-f5, but produces reasonably good edge-to-edge sharpness, and manages to avoid serious barrel distortion in wide-angle shots. However, although I know there are Leica fanboys out there who would flay me alive for suggesting such a thing, I suspect the some of the purple fringes I saw may in fact have been due to chromatic aberration rather than sensor charge leakage. 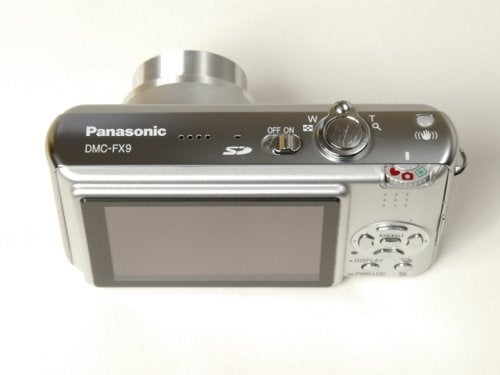 Panasonic has worked hard to build a good reputation over the past few years, despite being a relative newcomer to the digital camera market. It does make some excellent products, including the brilliant FZ30 and the terrific high-end cameras that it makes for Leica. However with recent cameras like the FX9 and the equally disappointing LZ5 blotting its copybook Panasonic is in danger of losing some of the goodwill it has built up. I for one shall be reviewing my next Panasonic with caution.


Although it looks great, performs well and has the Leica name above the lens, the Panasonic Lumix DMC-FX9 fails to deliver the expected picture quality, especially considering the cost when compared to many other 6MP ultra-compacts. A very disappointing camera from a company that can do better.

Note: These four ISO test shots were taken indoors using diffuse natural light from a window. The camera was on a tripod, using the 2-sec delay timer to avoid shake. White balance was set to automatic. 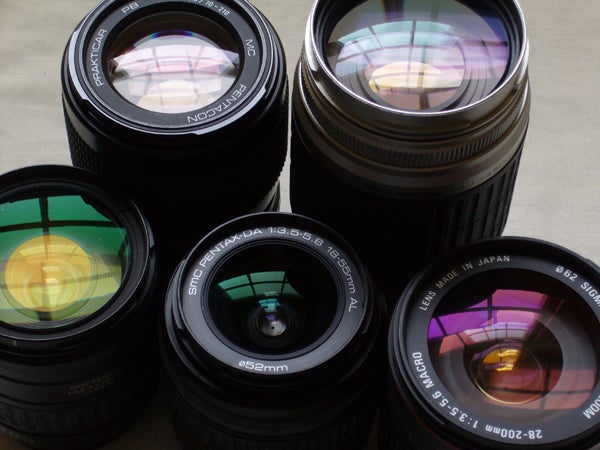 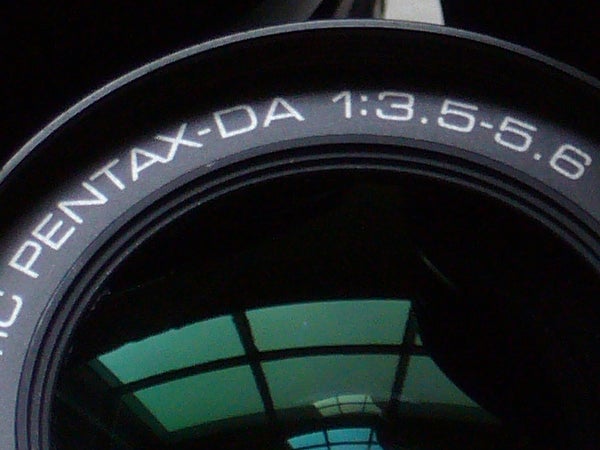 Even at the lowest ISO setting, there is visible green-red speckling in the shadow areas, image noise all over, and all shadow detail has been lost. Very disappointing. 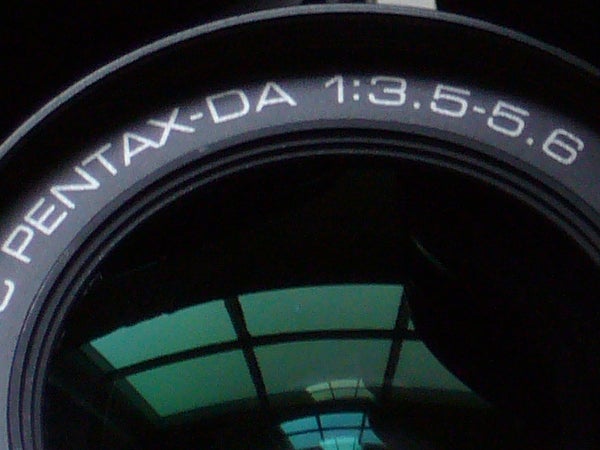 For some reason the camera’s meter has decided to keep the same exposure settings, so increasing the ISO to 100 has had barely any effect on the picture at all. 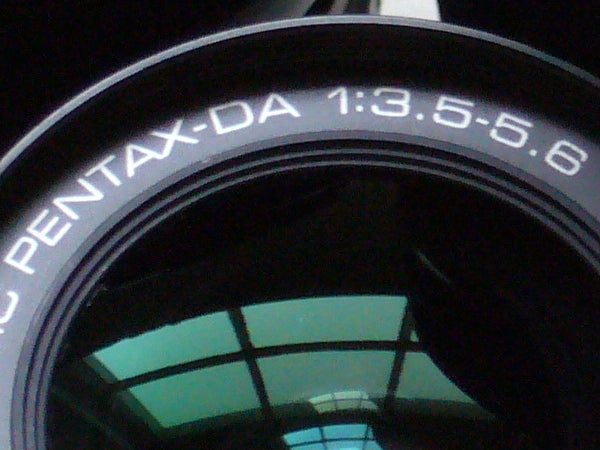 Again the same exposure settings, but with the ISO doubled the shot is about 1 stop lighter. The image noise has spread to more parts of the image, including some lighter areas. 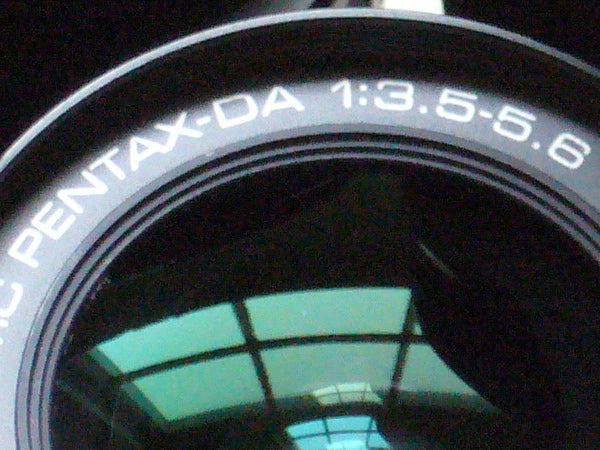 Again the exposure system has selected 1/8th at f5, so now the image is not only excessively noisy, it’s also over exposed. Nice one. 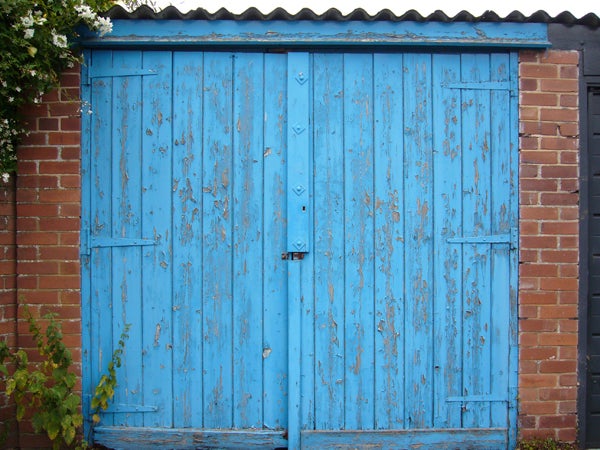 The Leica lens is the best part of the camera, producing good edge-to-edge sharpness and minimal barrel distortion, as you can see from the mostly straight horizontal and vertical lines in this shot. 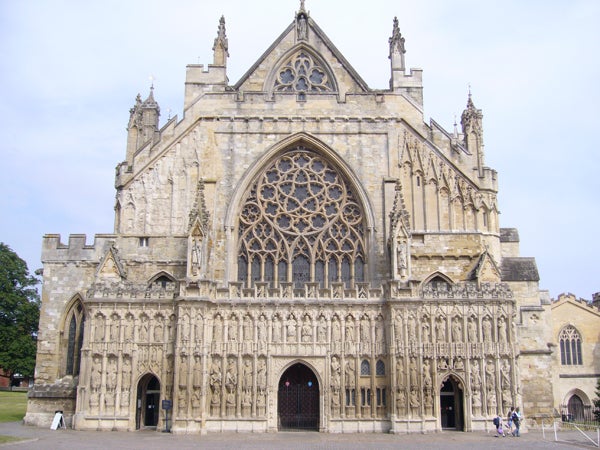 Under ideal circumstances the FX9 can produce what looks like a very good picture, until you examine it closely and see the JPEG artefacts and image noise. 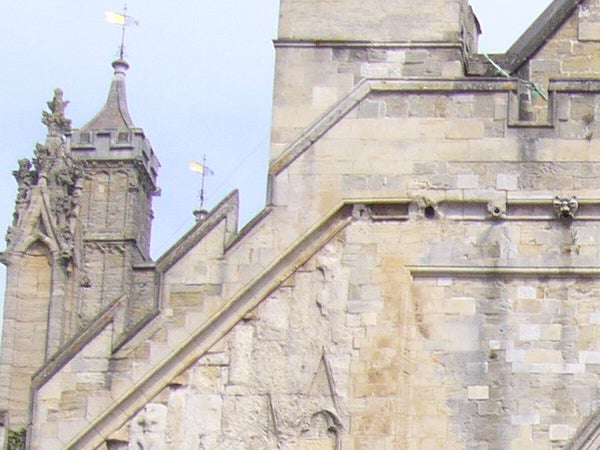 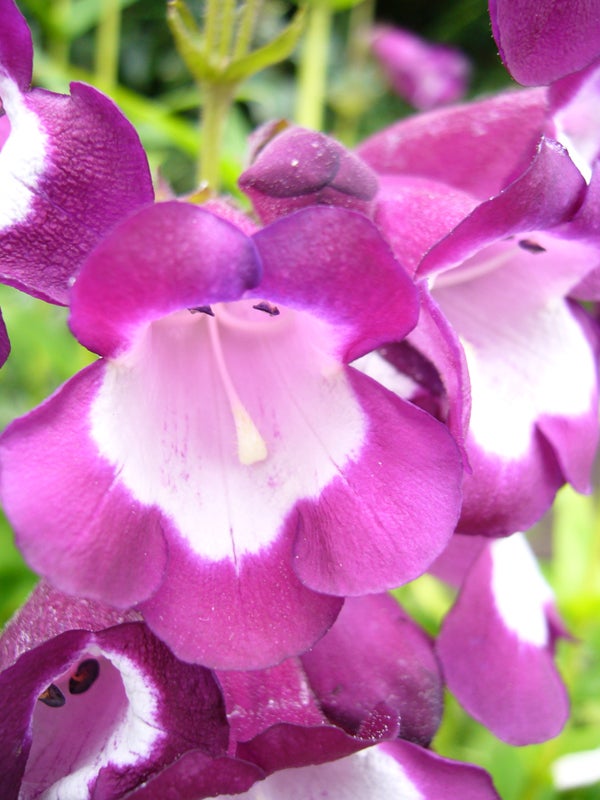 The focusing system is quick and generally accurate, with a macro range of 5cm. 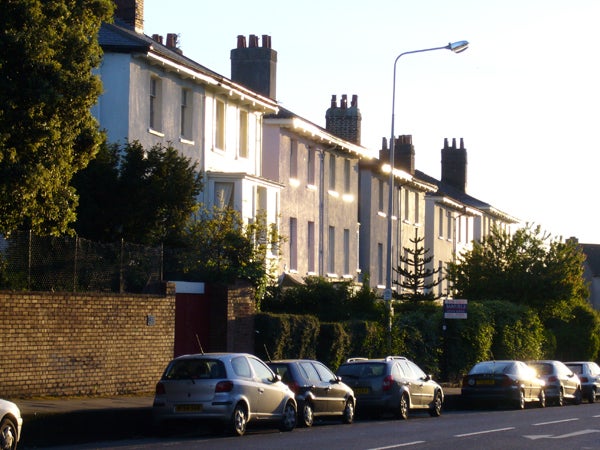 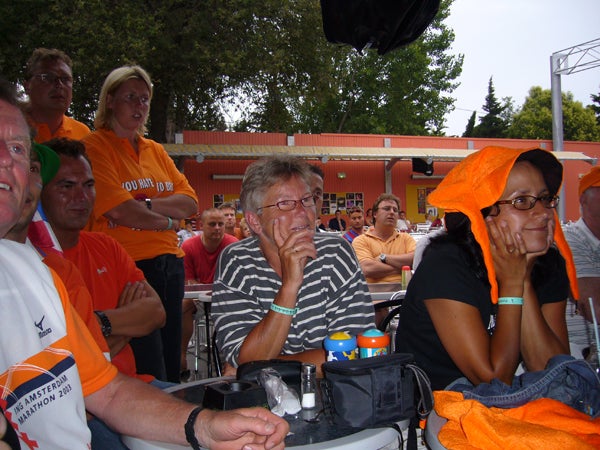 The flash is a bit under powered, but works well for close-range fill-in. These are Dutch fans watching Holland beat Ivory Coast 2-1. 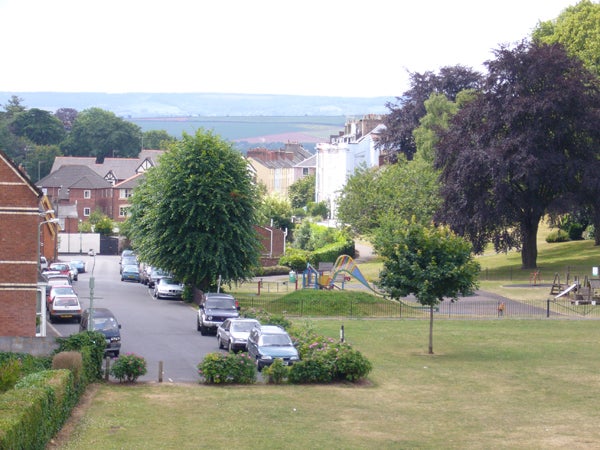 The FX9’s lens has a telephoto end equivalent to 105mm, which isn’t brilliant, but at least it means that… 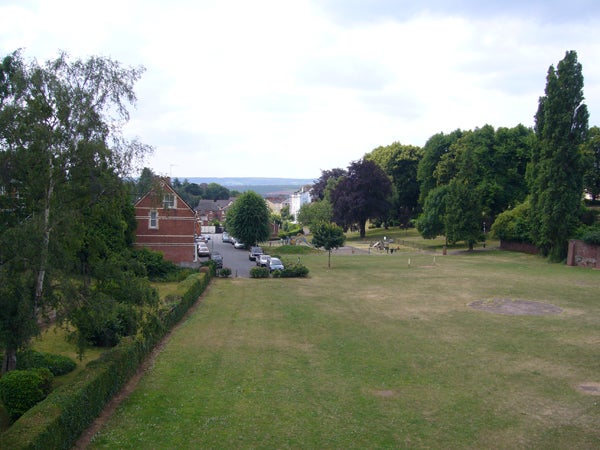 …the wide angle end is quivalent to 35mm, which is not too shabby.