The gap between still cameras and video cameras is getting narrower every year. If you look at the specification of high-end compact cameras from the middle of 2008, most of them offered at best 640 x 480 resolution video with mono audio. Over the past year or so, more and more compact cameras have come along offering 1280 x 720 resolution HD video, until it’s now more or less a standard feature. Now Panasonic has taken it one step further. The new Lumix DMC-FX700 is a sleek luxury compact camera which features full 1920 x 1080 50i (25fps interlaced) HD video with stereo audio, recording in the high quality AVCHD format. 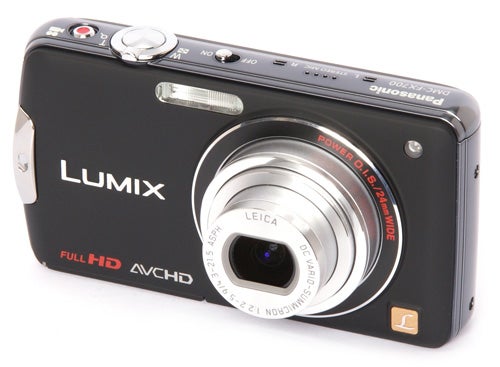 That’s not all it does either. The FX700 also features a fast f/2.2 5x zoom Leica-branded lens equivalent to 24-120mm, a big 7.5cm (3in) touch-screen monitor, a 14.1-megapixel 1/2.3-in MOS high-speed sensor which enables high-speed continuous shooting at up to 10fps at full resolution, and the option of full manual exposure control. There aren’t too many cameras on the market that can come close to the FX700’s specification, and what few there are are very expensive. It is competing with only a handful of top-end models such as the Canon IXUS 300 HS (£280) or the IXUS 1000 HS (£350), the Sony HX5 (£275) or the new TX7 (£350). However compared even to to these top-of-the-range luxury models the FX700 is expensive, with a current high street price of £379. It is possible to find it for less online, but then the same is true of its competitors. 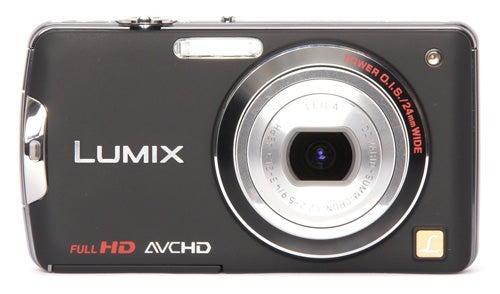 To be fair though the FX700 certainly looks like £379 worth of camera. Despite its exceptional specification it has a sleek shape that it almost small enough to earn the description “ultra-compact”, measuring 103.5 x 55.8 x 24.5mm. Like most expensive gadgets it is heavy for its size, weighing a reassuringly hefty 176g including battery and memory card. It’s difficult to tell what the body is made of – presumably aluminium – because it is covered in a smooth matt black plastic which looks great, setting off the bright chrome details nicely.

The matt surface has an almost velvety texture, making the FX700 very pleasant to handle. Unlike some touch-screen cameras this one does have some conventional controls on the back, consisting of two small buttons for mode and menu and a slider switch to select between shooting and playback mode. Above these is a small textured area that provides space for the thumb, while the chrome wrist strap lug on the front provides some purchase for the fingers, giving the camera a comfortable and secure grip. On the down-side, the shooting/playback switch does mean that the FX700 does not have “shooting priority”, in other words tapping the shutter button in playback mode does not activate shooting mode as it does in most compacts. 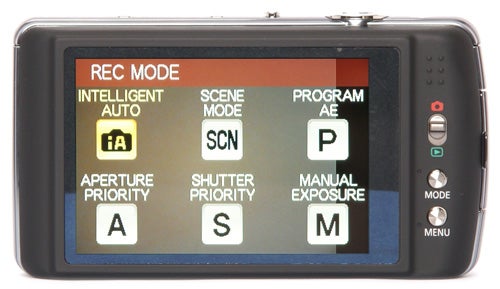 The main control interface is of course the touch-screen. The screen is very responsive and the menus operate quickly and smoothly, but it does have a few oddities. There is a row of icons permanently displayed down the right of the screen which one might expect would include the most often-used shooting settings. It does include exposure compensation, flash mode, self timer and macro mode, but other useful adjustments such as focus and exposure modes, white balance and picture quality are relegated to a separate quick menu. Meanwhile there is a side bar panel for an alternate on-screen touch-controlled zoom. The FX700 has a perfectly good zoom control as a bezel around the shutter button, so there seems to be little point in duplicating its function using the touch screen. Similarly many of the functions of the quick menu are duplicated in the conventional main menu. This is really an unnecessary complication on what is already a pretty complex camera.


One unexpected highlight is the option of aperture priority, shutter priority and full manual exposure control. These are very well implemented, with a nice clear graphical touch interface that adjusts exposure settings by dragging a pair of horizontal sliders. Unlike some “manual” compacts the FX700 does allow full aperture control, with a full three stops of adjustment at wide angle. Shutter speeds from eight seconds to 1/2000th can also be selected.


Like all of Panasonic’s compact cameras the FX700 has an iAuto (Intelligent Auto) mode, and in this case it includes some pretty sophisticated automation. As well as the usual scene recognition, automatic ISO control and auto exposure, it also incorporates Panasonic’s “intelligent zoom”, which enhances detail and edge definition in digital zoom shots. It also includes Motion Deblur, a feature which attempts to set an appropriate shutter speed to capture a moving subject, based on the subject’s speed. As far as it is possible this does appear to work, although it doesn’t completely eliminate movement blur on fast moving subjects. 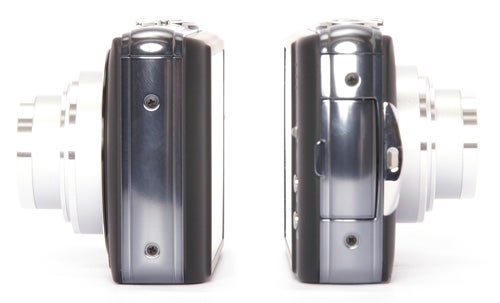 The FX700’s stand-out feature is of course its Full HD video mode. It shoots at a maximum resolution of 1920 x 1080 pixels, at a frame rate of 60i (sensor output 30p) for the NTSC version, or 50i (sensor output 25p) for the PAL version. Not too surprisingly the video quality in AVCHD mode is excellent, maybe not quite up to dedicated camcorder standard but much better than the vast majority of other compacts. Audio quality is also very good, with excellent stereo separation from the pair of microphones set on the top panel, although they’re not terribly directional. Full optical zoom is also available while recording, and the zoom motor is so quiet it can barely be heard on the soundtrack

Thanks to its advanced MOS sensor and Venus Engine FHD processor the FX700 has exceptional performance, although its start-up time of approximately 3.5 seconds is a little on the slow side. Once it’s awake however it can really fly, with a shot-to-shot time in single-shot mode of less than a second. In continuous mode it can shoot at full 14.1MP resolution at up to 10 frames a second for up to 12 shots, or at up to 60fps at lower resolutions. There is a distinct audio cue when shooting.

The FX700’s autofocus system is excellent. The focus tracking and face detection features work very well. It focuses in a fraction of a second in good light, and also works exceptionally well in poor light. Thanks to its high sensitivity and strong AF assist lamp it will focus in pitch dark at a range of around four metres.


Having spent nearly £400 on a compact camera you would naturally expect superior image quality, and the FX700 generally doesn’t disappoint. The Leica-branded lens is very good, and although it does produce quite noticeable barrel distortion at wide angle, it does offer good corner-to-corner sharpness with virtually no chromatic aberration.


Exposure metering is reliably precise, especially in multi-zone mode, and despite the lousy weather this week the results were better than expected. Dynamic range is surprisingly good for a 14MP small-sensor camera, with plenty of shadow detail without losing too much of the highlights. The Intelligent Exposure part of the iAuto mode further boosts shadow detail.


Colour rendition is also very good, although again the dreary overcast conditions slightly spoiled the results. Nonetheless the camera captured what was in front of it with great accuracy. The level of fine detail recorded by the 14.1MP sensor is as high as expected, however examining the sample shots closely does show them to be a bit grainy and processed-looking. 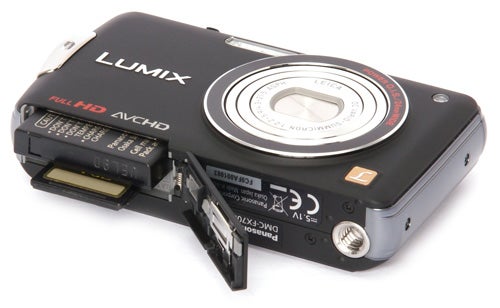 Noise control is a little better than one usually expects from a camera with a 14MP 1/2.3-inch sensor. Images at 400 ISO are sharp and well detailed, but pixel binning at 800 ISO robs images of some fine detail, and 1600 ISO has even less detail, with the addition of colour distortion problems. Higher ISO settings of 3200 or 6400 ISO are available, but only in the High Sensitivity scene mode, and only at 3MP resolution.

The Panasonic FX700 is a very expensive camera for a pocket compact, but it offers a range of features that few others can match. Build quality and handling are up to the usual high standard, performance is outstanding, and while there are camera that offer better image quality the FX700 will seldom disappoint. 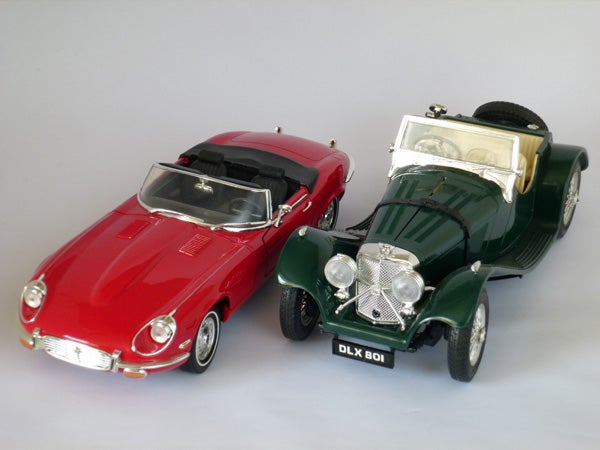 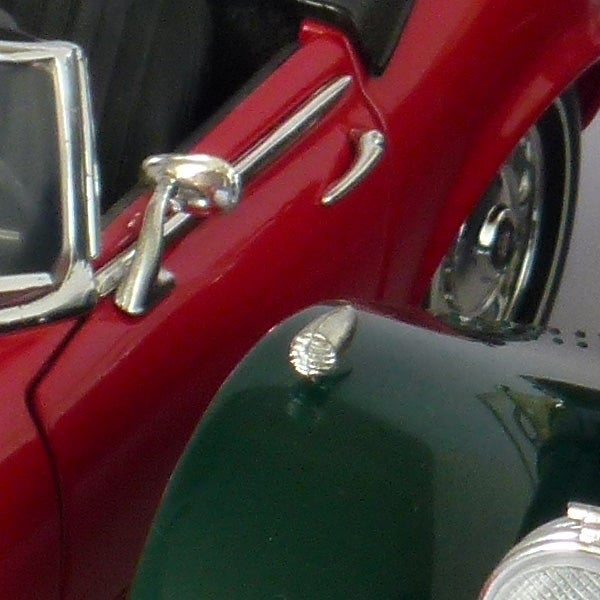 At 100 ISO the image is sharp and noise-free, but the colour gradient could be a bit smoother. 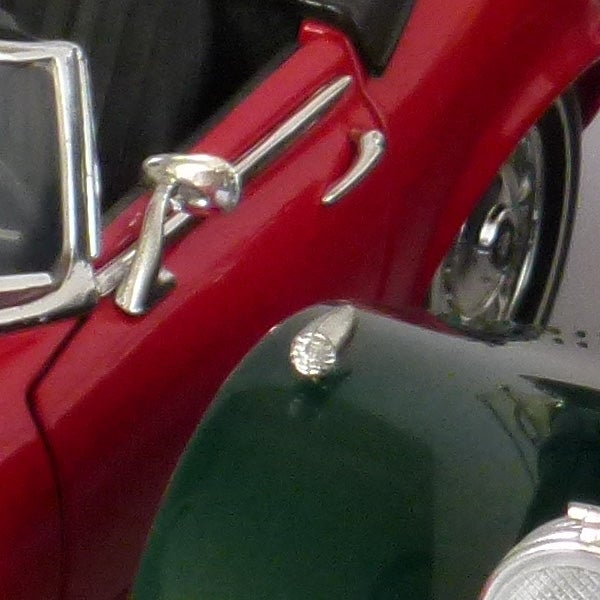 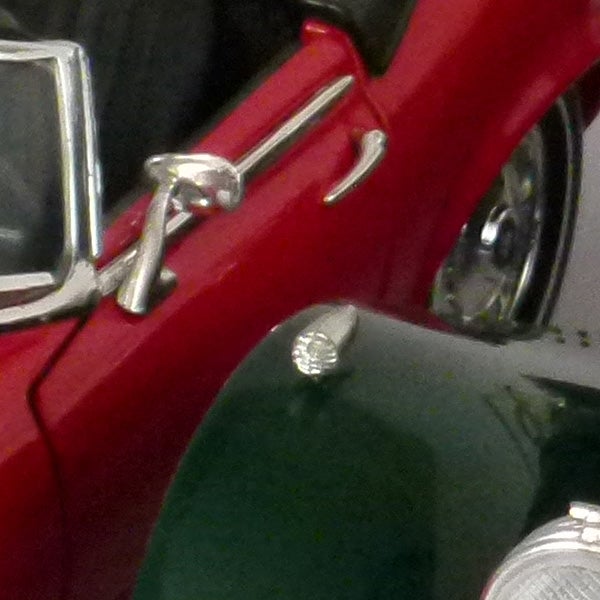 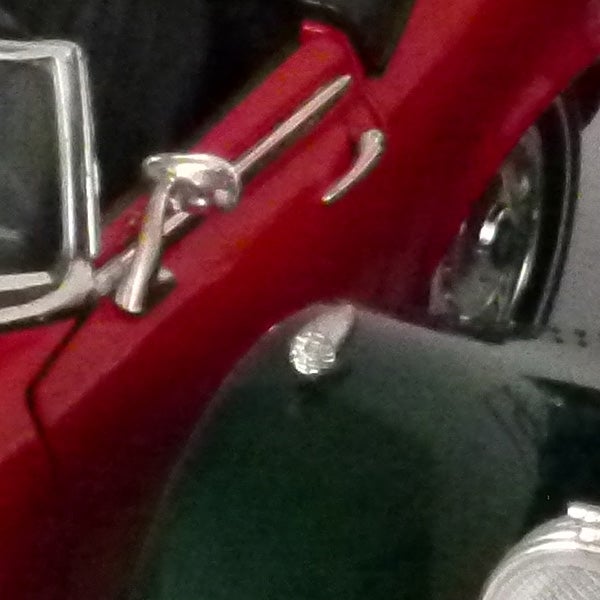 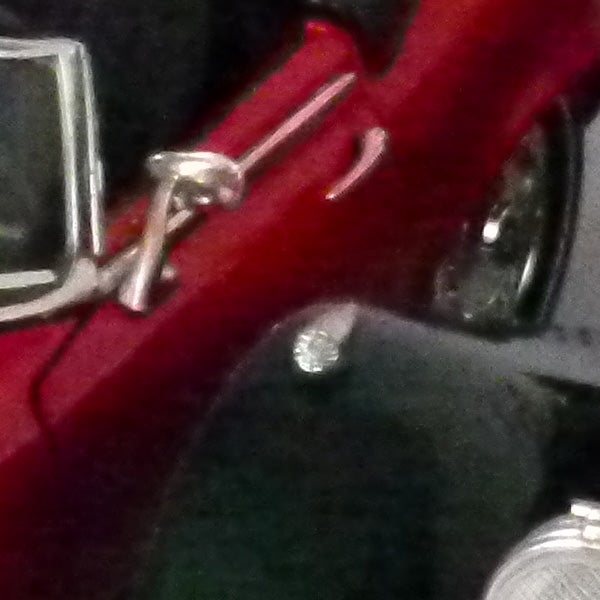 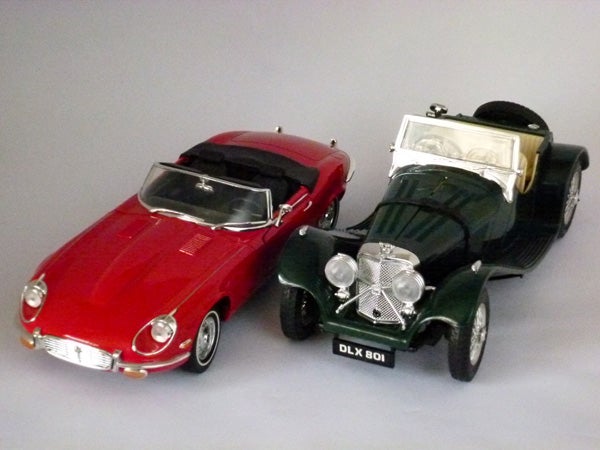 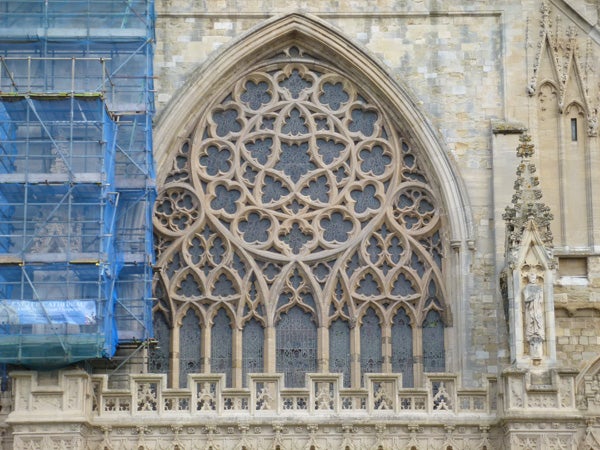 Here’s the usual detail test shot of the West Window of Exeter Cathedral, for you to compare with other cameras. See below for a full res crop, or click to see the whole picture. File size 5.4MB. 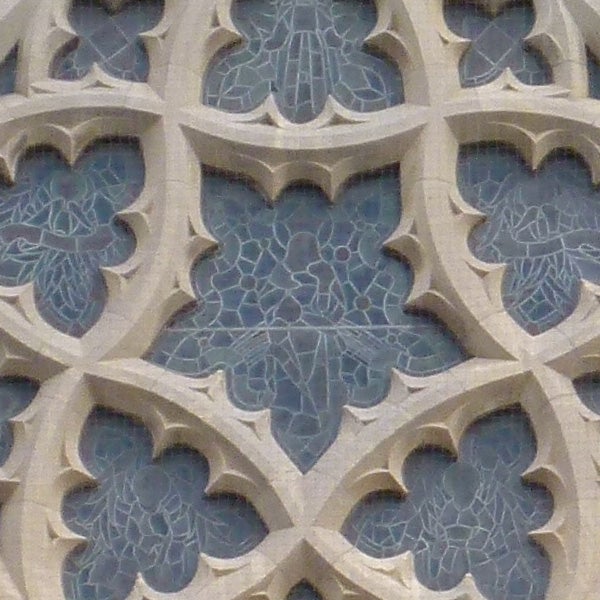 The lens and sensor capture plenty of detail, but the image looks a little over-processed. 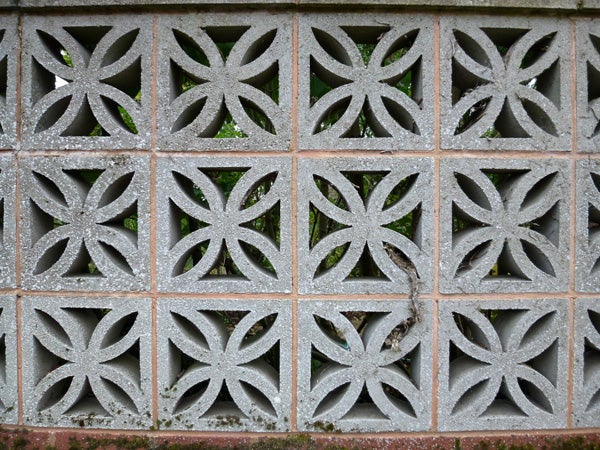 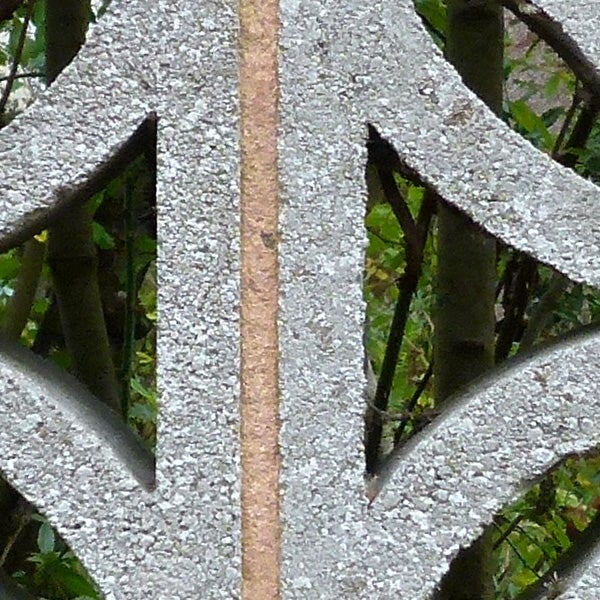 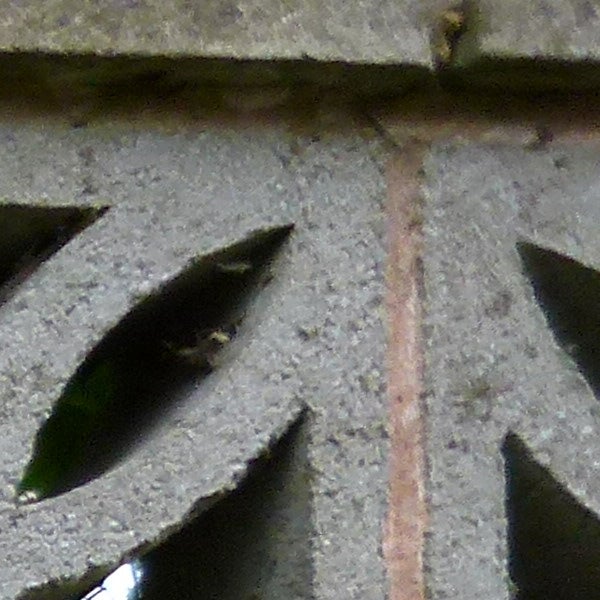 Corner sharpness is also better than average, with barely any chromatic aberration. 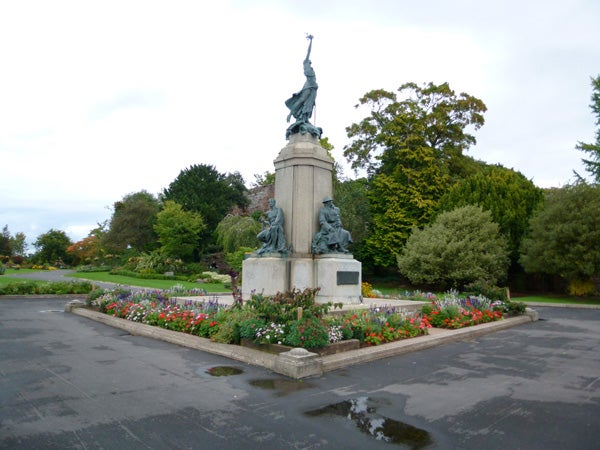 The wide angle end of the zoom is equivalent to 24mm. 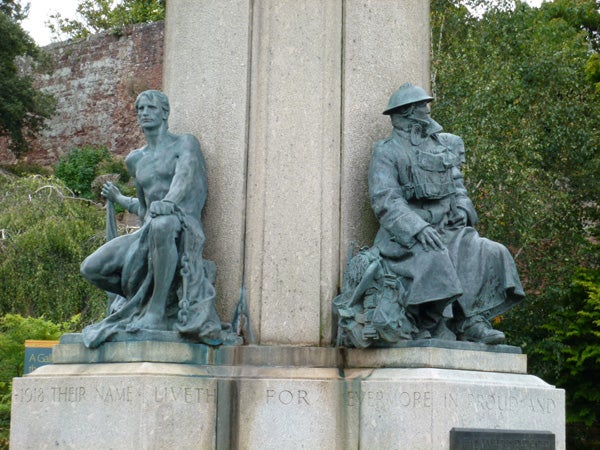 The telephoto end is equivalent to 120mm. 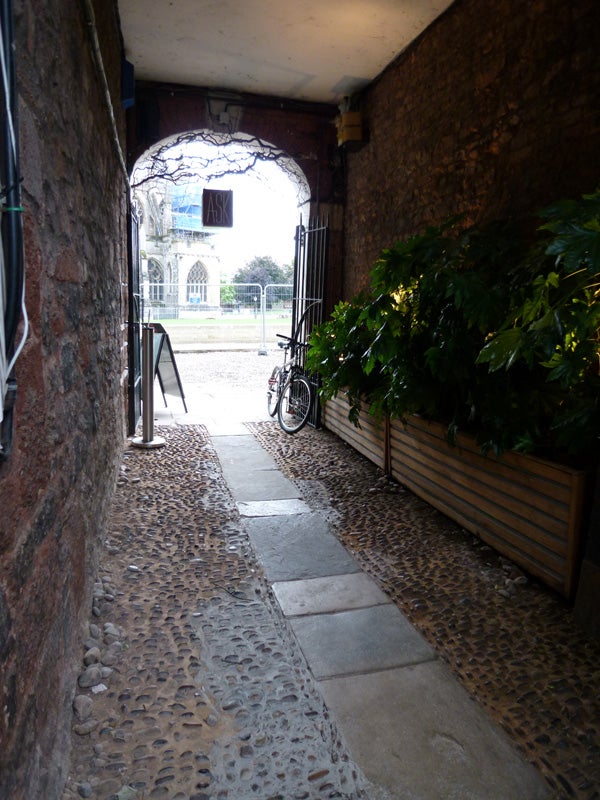 Even in standard program mode the FX700 captures plenty of shadow detail. 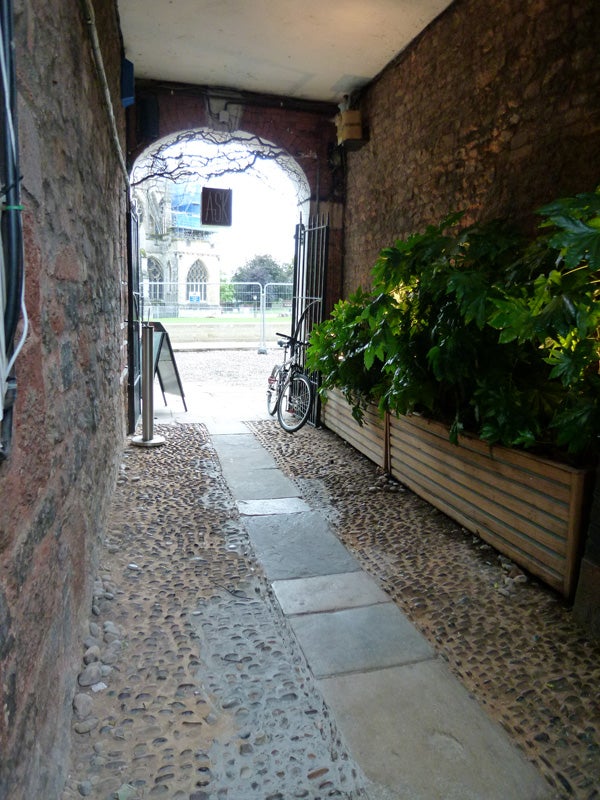 In iAuto mode the dynamic range is even better. 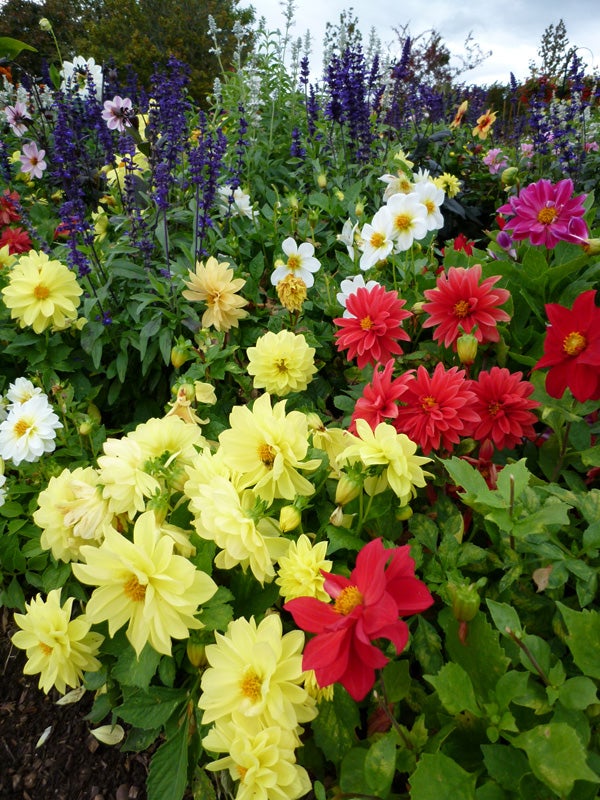 Despite the overcast conditions the FX700 has captured the colours superbly.