Earlier this year Panasonic launched a whole swath of new cameras, updating most of its existing compact camera lines and adding a couple of new ones. We’ve already taken a look at some of them, such as the FS20, the TZ4, the LZ10 and the FS5. Today it’s the turn of the flagship of the premium ultra-compact models, the 10-megapixel 4x zoom FX35. As one might expect from the model number it replaces last year’s popular FX33. 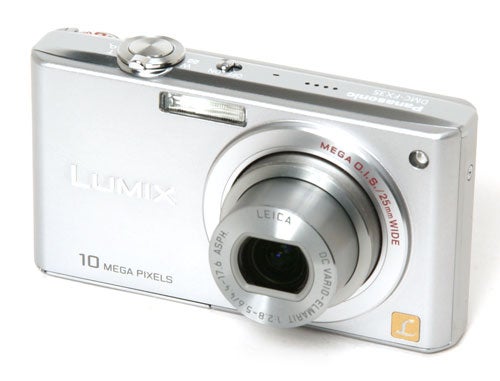 The FX35 is currently available for around £170, although some outlets are asking closer to the official list price of nearly £300. It is quite expensive, but when compared to the top premium compacts from other manufacturers it seems like rather better value. Other wide-zoom ultra-compacts with mechanical image stabilisation include the Nikon CoolPix S600 (£220), the 8-megapixel Canon IXUS 860 IS (£254) and the Sony Cyber-shot W170 (£170, review coming soon).


Rather than re-think a successful formula, Panasonic has instead opted for an upgrade, but this is more than just the usual incremental increase in megapixels; the FX35 improves on all of the FX33’s key features.


Where the earlier model had a 3.6x zoom lens with a 28mm wide-angle, the new camera features a 4x zoom Leica-branded lens with a wide-angle setting equivalent to 25mm, one of the widest on any current compact camera. Of course the sensor gets an upgrade too, from 1/2.5-inch and 8.1 megapixels to 1/2.33-inch and 10.1 megapixels. The LCD monitor is improved as well. It’s still 2.5 inches, but is now sharper with 230,000 dots. 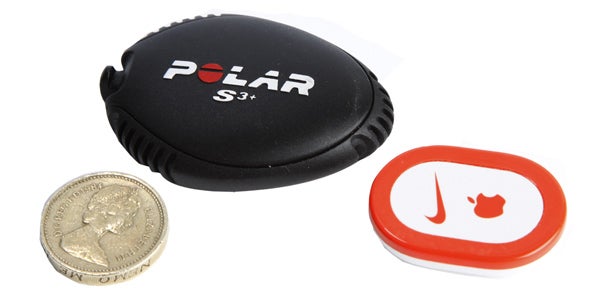 Unchanged however is the slim, pocket-sized all-metal body, measuring 94.7 x 51.9 x 22.0 mm, although somehow it manages to be a little lighter at 125g minus battery and card (146g loaded). Like most of Panasonic’s compact cameras the FX35 is available in matt black or the anodised silver finish of my review sample. There are a couple of detail changes to the controls; the on/off slider switch and the shutter button with its rotary zoom control are slightly different shapes, although they still work in exactly the same way.


Main mode selection is still adjusted by a small partially covered thumbwheel, although it has one less setting this time, since the choice between shooting and playback mode has now been moved to a small slider switch on the back of the camera between the mode dial and the D-pad.


The pad and the two small buttons at the bottom of the rear panel are unchanged, although the ‘FUNC’ button has been re-named as the ‘Q.MENU’. It still performs the same function, bringing up a handy function menu for quick adjustment of frequently used shooting options.

The stand-out feature is obviously that extra-wide-angle minimum zoom setting. Most digital compact cameras have a wide-angle of around 35mm, which is fine for general snapshots. An increasing number however are featuring 28mm-equivalent settings, traditionally regarded as the start of true wide-angle photography. The FX35 has a minimum zoom setting equivalent to an even wider 25mm though, and it’s amazing how much difference that extra three millimetres makes. The horizontal angle of view is approximately 71.5 degrees, compared to 65.5 degrees for a 28mm lens or 54.4 degrees for 35mm. Suddenly you can fit half the room into the frame, where before you’d have a hard job fitting in everyone sitting on the sofa. 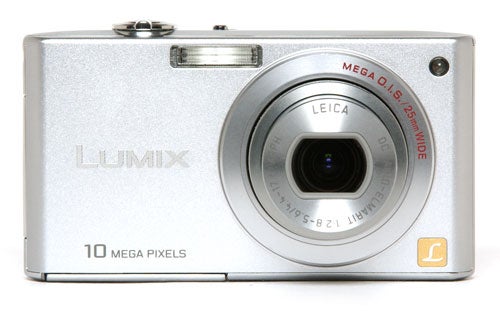 The FX35 is a snapshot camera at heart, but it is loaded with advanced automatic features to help produce good pictures in almost any circumstances. As well as the usual program auto mode, it also features an improved version of the Intelligent Auto mode introduced with the FX33, in which the camera automatically selects the optimum scene mode, metering mode and ISO setting for the situation. Elements of the iAuto function can be selected individually in program mode via the menu. 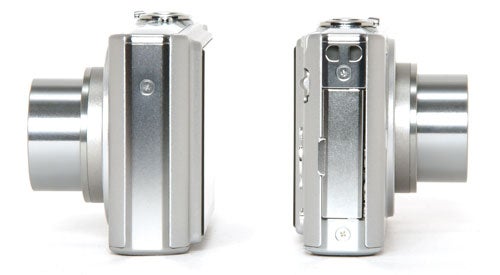 If all that isn’t enough, the FX35 also has an exceptionally good movie mode, which can shoot 720p high-definition movies at 30fps with mono audio, with maximum recording time limited only be storage space.

For all its technical sophistication the FX35 is still a fairly brisk performer. It starts up in around 2.5 seconds, which while not breaking any records is still quite respectable. In single-shot mode it can sustain one shot every 1.7 seconds, which is also reasonably quick, while in long-period continuous shooting it more than doubles that speed, shooting every 0.7 seconds.

The autofocus system is fast and reliable, and works extremely well in low light. It has a good AF assist lamp, and can focus in total darkness at a range of around three metres. If it fails to focus an on-screen display tells you the safe in-focus area so you can at least guess if your shot will be sharp.


Image quality is also very good, with a lot of credit going to the superb lens, which provides excellent sharpness almost right across the frame, blurring only a little in the far corners at wide angle. Despite its exceptionally short focal length the lens also produces very little wide-angle distortion, producing almost perfectly straight parallel lines.


Exposure metering is accurate and consistent, and dynamic range too is better than average for a 10MP ultra compact, although it did tend to slightly over-expose highlights, leaving some high-contrast shots with blown-out bright spots. 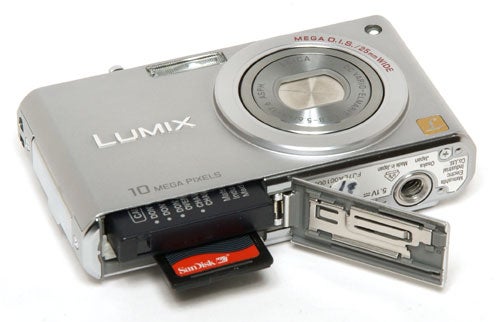 Image noise is the only real problem, as it frequently is for Panasonic cameras, and even this isn’t too severe. Images at 400 ISO show significant loss of detail due to noise reduction, and 800 and 1600 are progressively even worse. However colour reproduction remains consistent, and image quality at lower ISO settings is superb.

The Panasonic FX35 demonstrates just how much technology can be squeezed into even the tiniest camera bodies. It combines terrific build quality and aesthetic design with a class-leading wide-angle lens, decent performance, exceptionally good low light performance. Only the slightly annoying high-ISO noise prevents it scoring 10/10 in this area. If you are looking for a feature-packed luxury compact with wide zoom and image stabilisation then the FX35 is one of the best on the market. 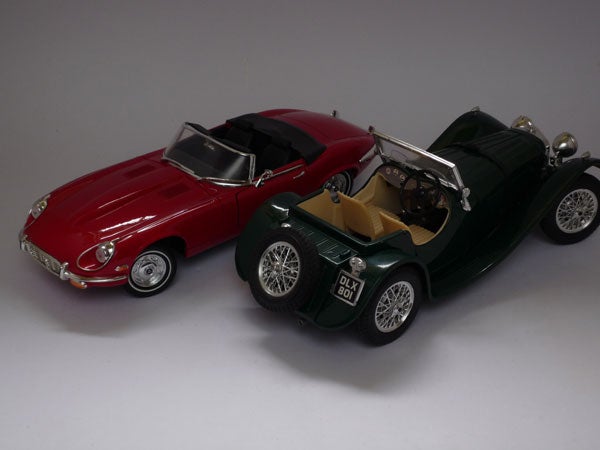 This is the full frame at 100 ISO. It’s a bit dark due to the adjustable long-exposure shutter setting being limiter to 1/8th. Unfortunately the camera has no been returned to Panasonic, so I can’t replace it. 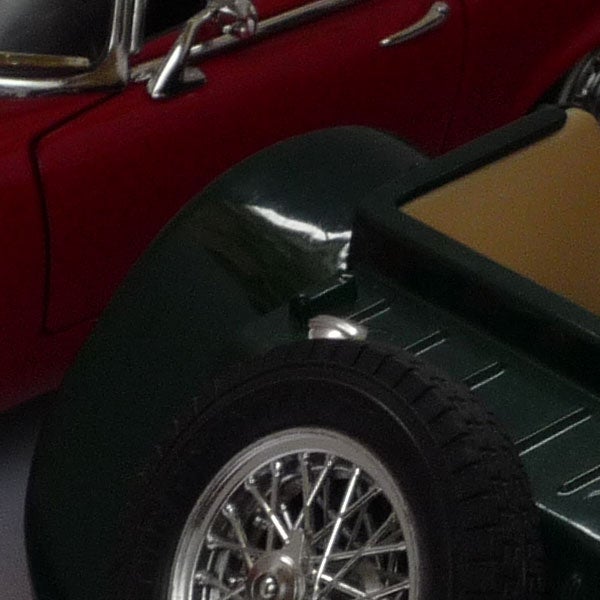 The shot may be a stop too dark, but the image quality is extremely good at 100ISO. 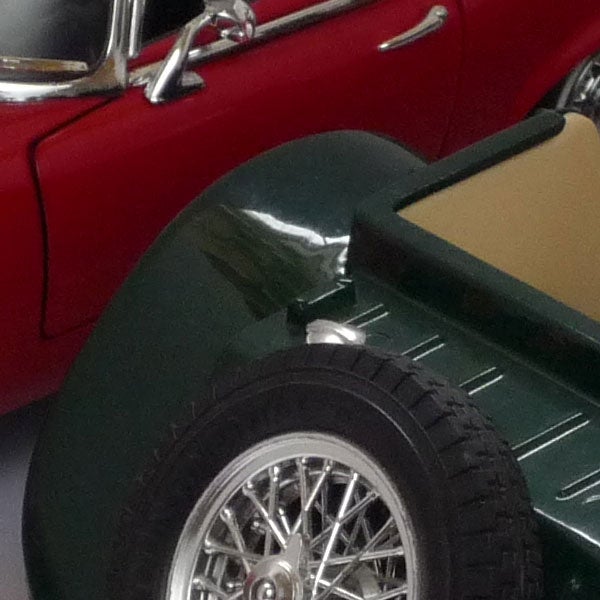 200 ISO with better exposure, and still no real noise problems. 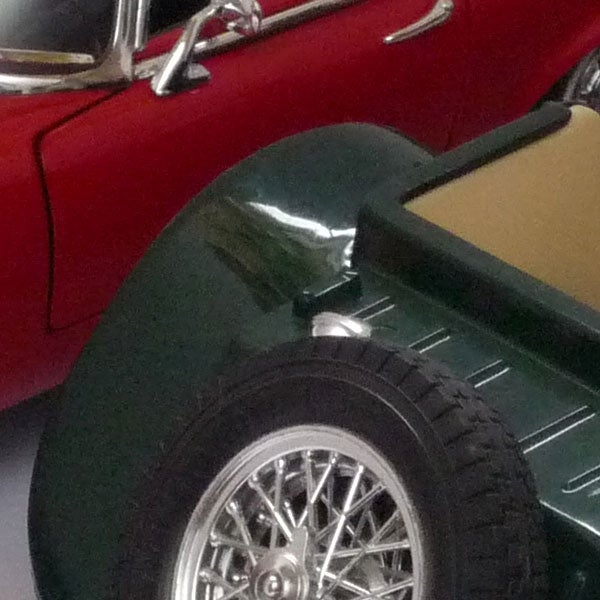 400 ISO and the noise reduction is already erasing detail. 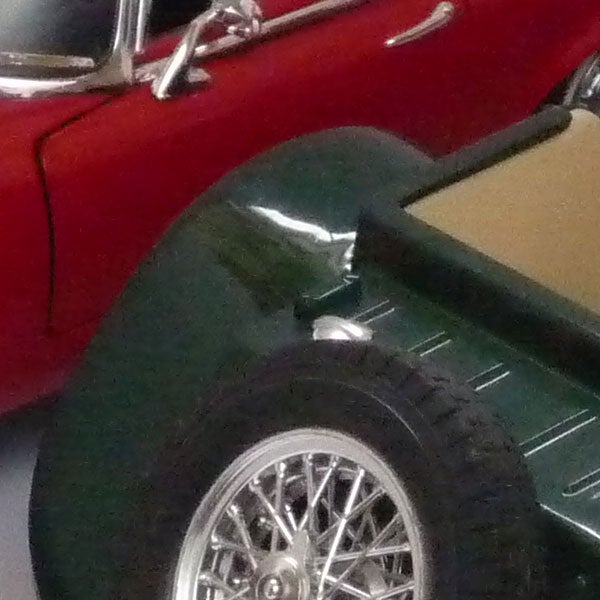 Noise is a major problem at 800ISO, but colour is still fairly accurate. 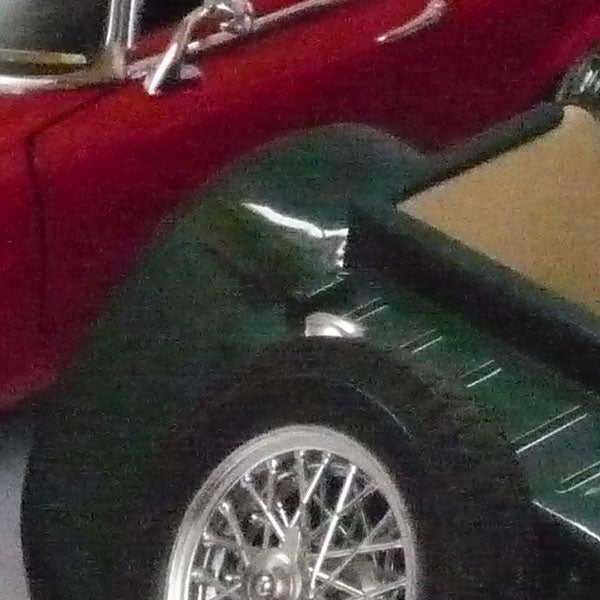 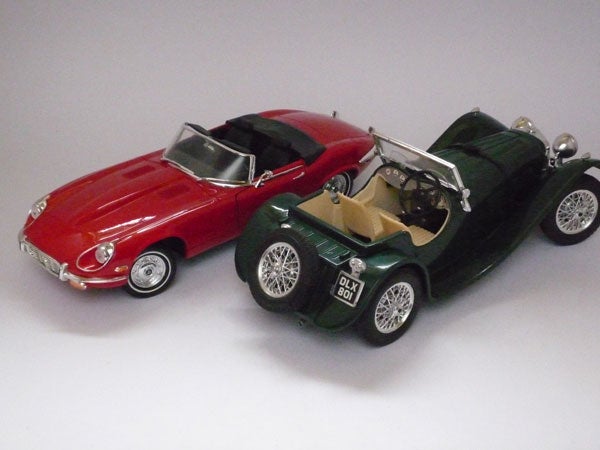 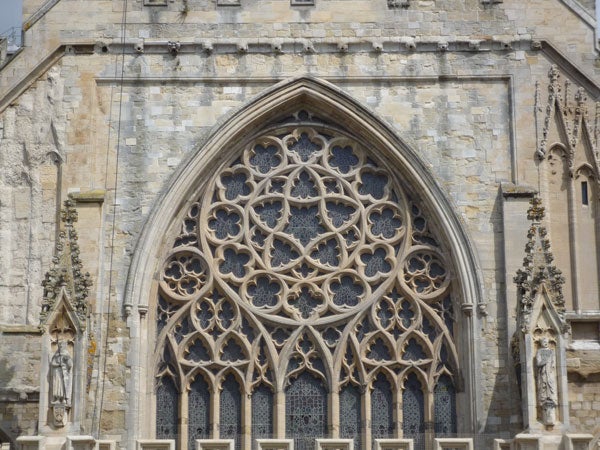 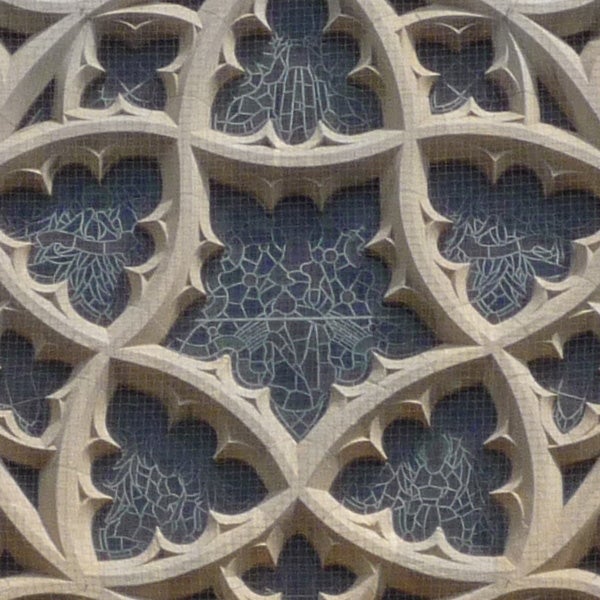 This a crop of the above image. There’s lots of contrast and fine detail. 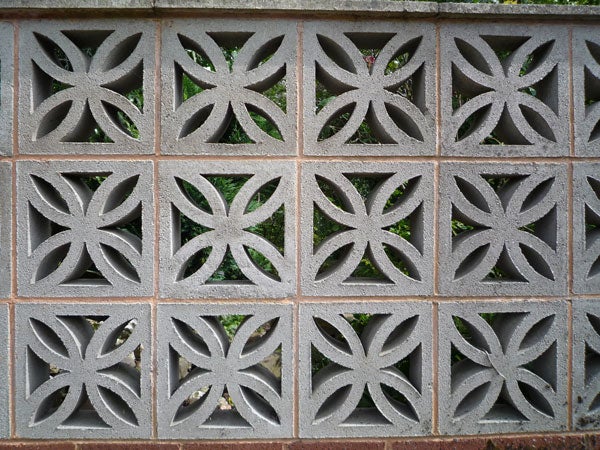 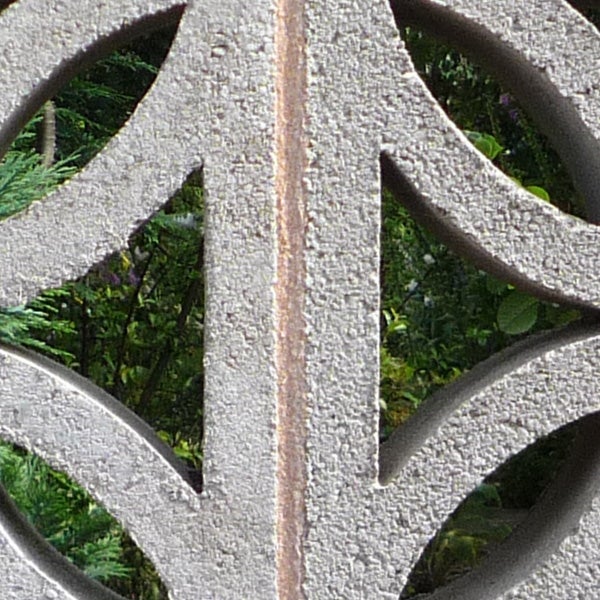 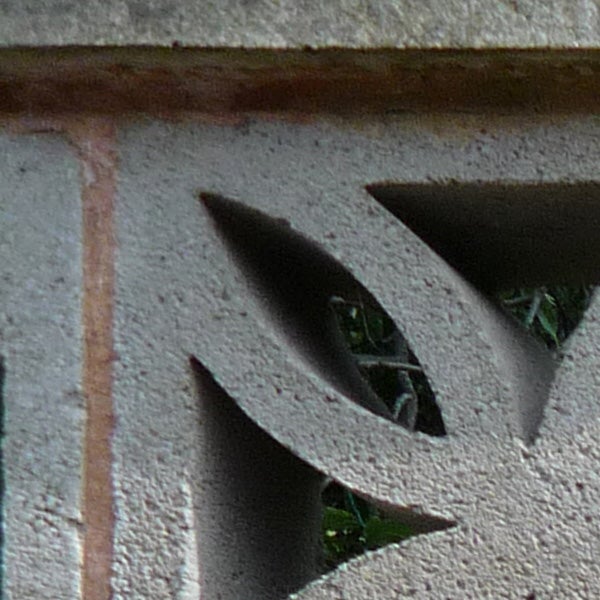 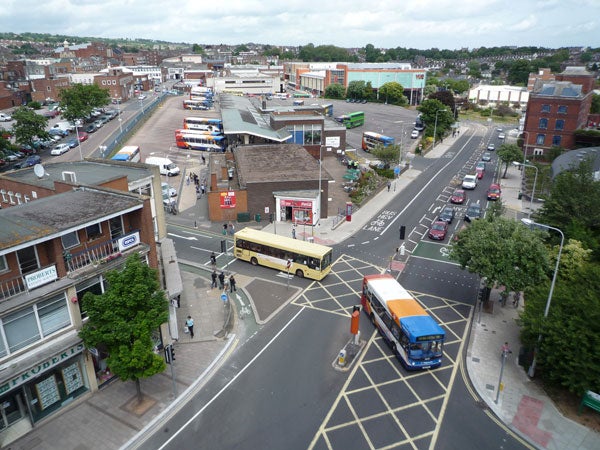 The wide-angle end of the zoom range is equivalent to 25mm. 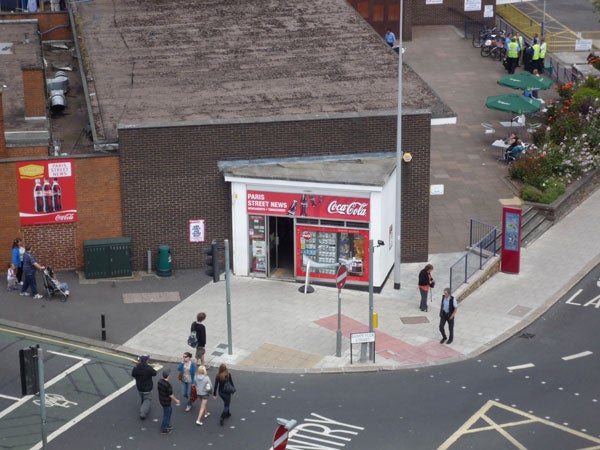 The telephoto end is equivalent to 100mm, less than most 3x zoom compacts. 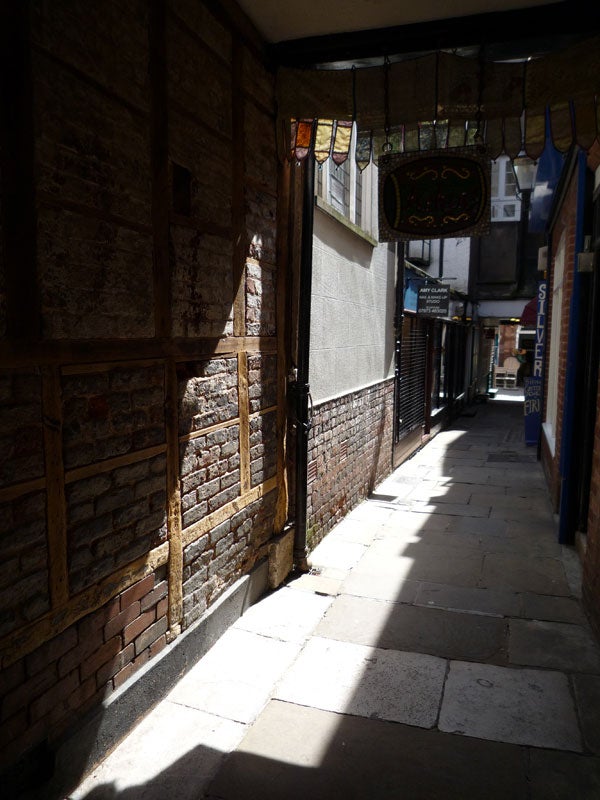 Dynamic range is adequate, but some highlight detail has been burned out. 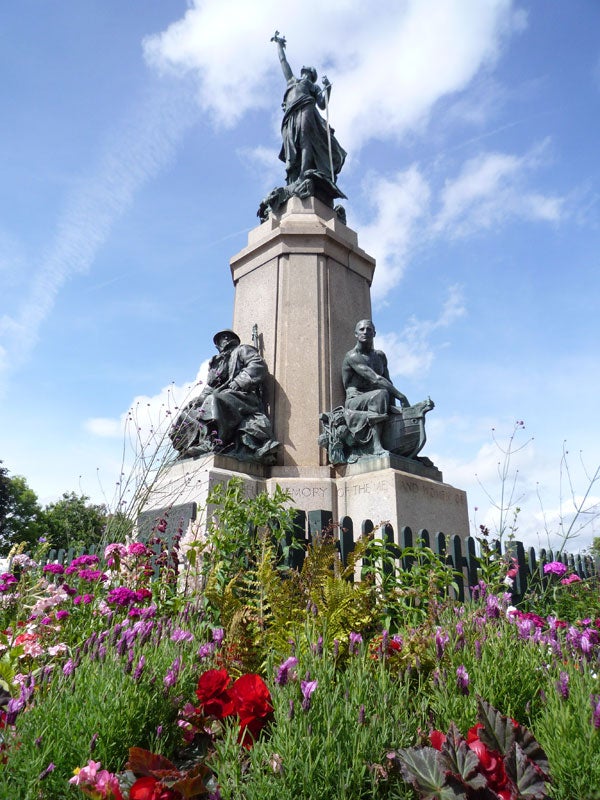 The ultra-with zoom can produce some unusual shots.