It’s been a busy few months in the digital camera business. Most of the major companies have launched ranges of new products this summer, and a few more are yet to do so. One of the first big launches of the season was Panasonic’s announcement of the Lumix DMC-FZ18 super-zoom camera, and the FX55 and FX33 ultra-compacts, at a lavish media event in Dublin last month. It’s not often I’m lucky enough to get such early review samples, but I’ve already looked at the FZ18, and this week it’s the turn of the FX33. These are brand new cameras that have barely arrived in the shops yet. 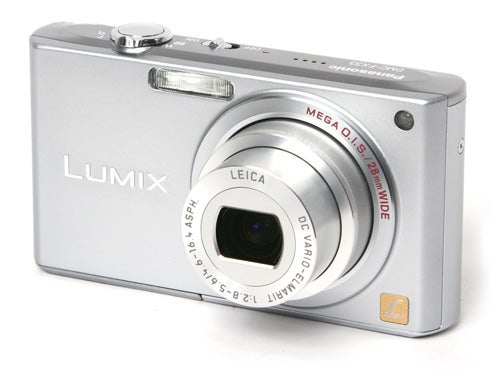 For its past few camera launches, Panasonic has wisely concentrated its efforts into what it does best; high-quality super-zoom bridge cameras and stylish high-value ultra-compacts. Both of these are competitive fields, but in the later category the Lumix range is pitted directly against the excellent and deservedly popular IXUS range from market leaders Canon. Whether it’s an example of convergent evolution, sheer coincidence or the sincerest form of flattery, the new FX33 has a specification that is strikingly close to that of a new camera announced by Canon just this month, the new IXUS 860 IS. Since that model is a replacement for the most popular camera in the IXUS range, the excellent 850 IS, Panasonic’s new FX33 is going to have a tough job. At least it can compete on price. The FX33 has just gone on sale at around £230 from several online retailers, which is about the same current price as the 850 IS. The 860 IS is being launched in September at £299. The FX33 is still quite an expensive camera when compared to other premium compacts such as the Nikon S500 (£145), Olympus mju 760 (£170) and even the new Sony Cyber-shot DSC-W90 (£220). 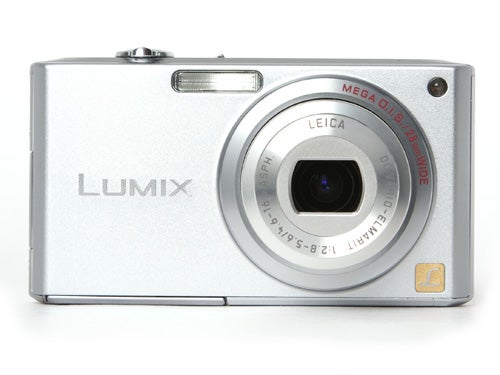 Let’s take a look at that specification. The FX33 has an 8.1-megapixel 1/2.5-in sensor, a Leica-branded 3.6x zoom lens with a wide-angle end equivalent to 28mm, a 2.5-in 207k pixel LCD monitor, the high-performance MegaOIS optical image stabilisation system and an improved Venus Engine III image processor delivering a maximum ISO of 1600. It also features Panasonic’s new Intelligent Auto function, which is supposed to produce better results more easily. It doesn’t have any manual exposure functions, but then it’s not the sort of camera that needs them.

One of the key selling points of the FX33 is its sheer style. I’ve always thought that many of Panasonic’s compact cameras have a slightly retro look about them, in some way reminiscent of vintage rangefinder cameras, with a hint of 1920s-30s art deco. Maybe I know nothing about design history, but there’s no denying that the FX33 is a very pretty camera. It is available in black or the silver version I have here, and the build quality is as good as the looks. It has a strong all-metal body, finished in a smooth matt texture that doesn’t mark easily, with polished metal details. 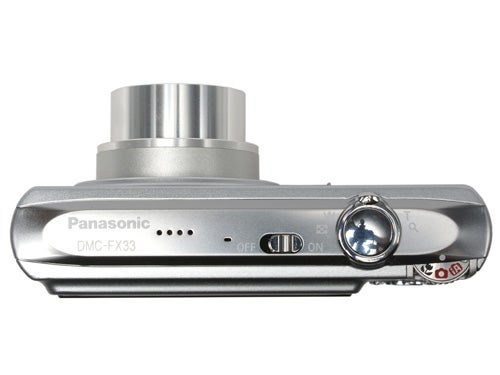 It is a very small camera, and at just 22mm thick it is one of the slimmest on the market. It is longer and lower than most other comparable cameras, which with its rounded ends and flush-folding lens makes it very easy to slip into a pocket. In fact it will fit fairly comfortably into those pockets you tend to find on almost everything these days that are designed to hold a mobile phone.


Like most compacts designed primarily for social use the FX33 isn’t exactly bursting with creative options, but it does have one or two unusual features. The tiny and rather fiddly recessed mode dial has only three main shooting modes; Normal Picture, Scene Mode or Intelligent Auto. In the first you have at least some control over ISO, white balance, AF mode and a few more options. Most of these are also available in the various scene modes, but in the Intelligent Auto mode the camera takes over everything. The idea with Intelligent Auto is that it analyses the scene and selects the most appropriate scene mode or program for the circumstances, uses face detection technology to automatically focus on and expose for any people in the scene, and also controls the ISO setting to minimise the possibility of either camera shake or motion blur. If that sounds vaguely familiar then it should; it’s a similar idea to the Hyper Program mode that has been a feature of Pentax cameras for years. 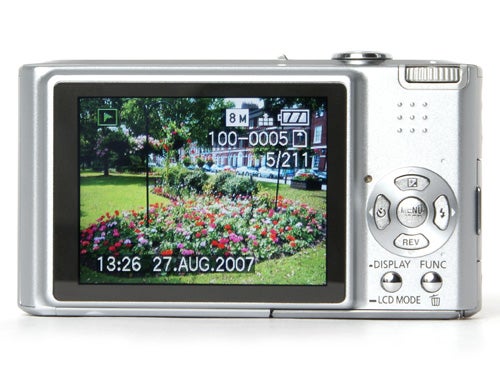 As well as the idiot mode, the FX33 has a good selection of scene modes, including all the usual suspects as well as soft-skin portrait, two modes for baby photos, one for shooting stars, an aerial photo mode and an underwater mode for use with an optional diving case. Other shooting options include a 5cm macro mode, a video mode that offers 848 x 480 widescreen movies at 30fps with sound (although the audio quality is rather awful), and a strange “Clipboard” mode, in which you can take a photo and review it on screen, but not write it to the memory. I suppose it could be useful if you were short on memory and wanted to check that a shot worked before committing it to the card, but when you can get gigabyte SD cards for under £20 who runs out of memory anymore?

Overall performance is good, although the 3.5-second start-up time is a little on the slow side. The 1.8-second shut down is quick enough though, and in single-shot mode the camera can maintain a rate of one shot every 2.5 seconds, which is reasonably fast. It has two continuous shooting modes, one which takes a series of shots at just under one frame a second, although the number of shots varies depending on image size, with only four frames shot at the highest quality setting. Strangely, shooting in Unlimited mode with a fast SD card (SanDisk Extreme III), I found I was able to shoot at a slightly faster rate (approximately 1.2fps) without stopping. That’s pretty fast for a compact camera. 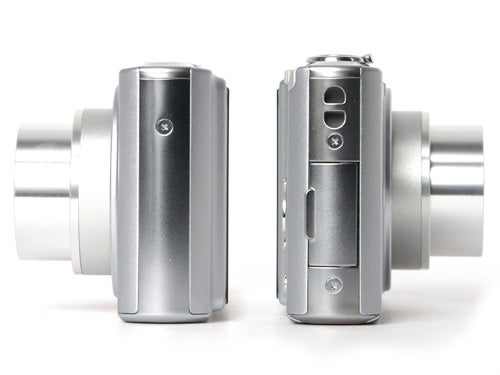 The autofocus system is surprisingly complex for a P&S model, with six different area modes including face detection. AF is quick and accurate, and also works extremely well in low light, with an AF assist lamp that has a range of about 3m. If the AF can’t get a lock, it says so very quickly rather than hunting around. The face detection system works well, as long as your subject’s face is unobscured and pointing towards the camera. 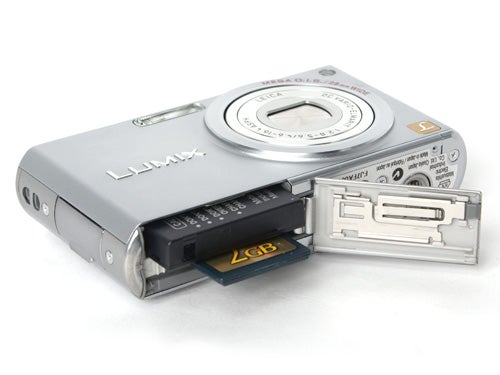 Image quality is fortunately one of the areas in which Panasonic’s latest generation of cameras has made a lot of progress, but for some reason the company still insists on putting tiny 1/2.5-in sensors in all its cameras, including the FX33. Many other manufacturers are moving more towards larger sensors, because of the advantages in colour depth, dynamic range and noise control. As a result, all of these factors could be better in the results produced by the FX33, but to be fair none are a real problem. Colour rendition and exposure are generally accurate, and the overall level of detail is very good, certainly on a par with other high-quality 8MP cameras. The Venus Engine III provides a noticeable improvement in noise control over previous models, but even so there is some colour speckling visible at all but the lowest ISO settings. A lot of credit goes to the excellent lens, which produces superb edge-to-edge sharpness and relatively little wide-angle distortion.

Panasonic keeps chipping away at Canon’s position in the premium ultra-compact market, and with the wide-angle Lumix DMC-FX33 it has a camera that can take on the best of the IXUS range. It has style, elegance, build quality, performance and simplicity of operation, and while it is slightly lacking in picture quality it will seldom disappoint, producing good pictures in almost any situation. 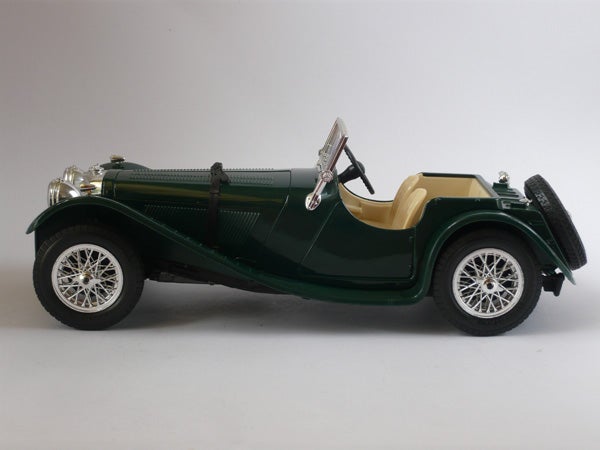 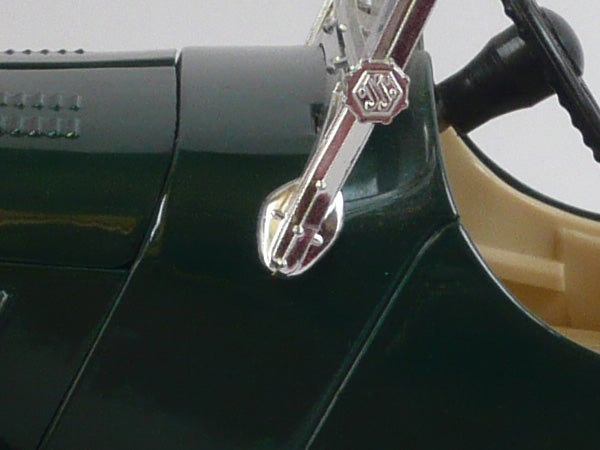 At the minimum ISO setting the level of detail is excellent, and the picture is nice and smooth. 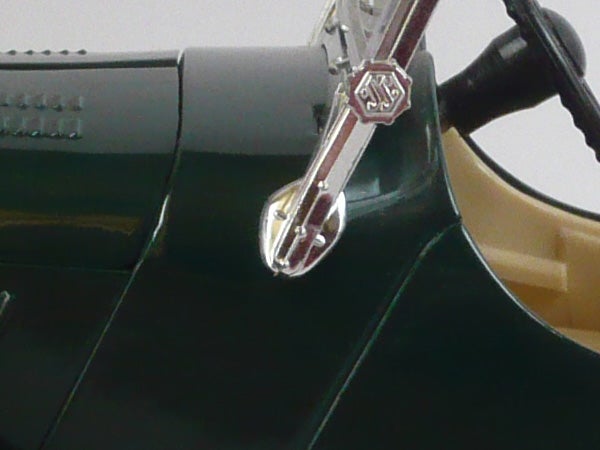 Already at 200 ISO there is uneven mottling in the darker colour areas, and some evidence of noise. 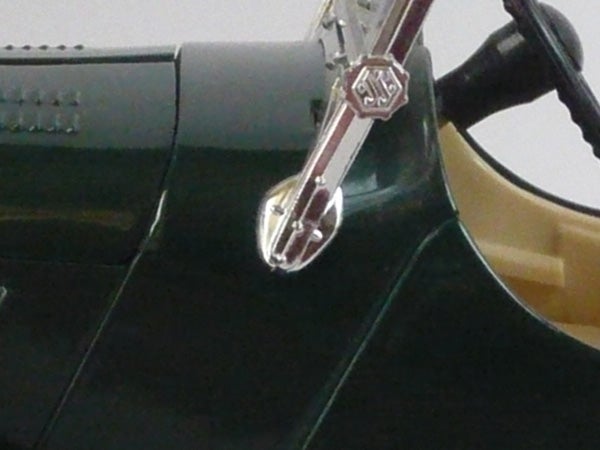 At 400 ISO the noise reduction starts to kick in, and some detail gets blurred out. 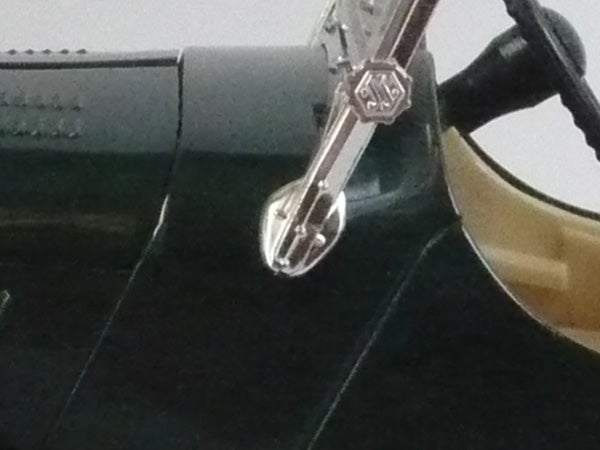 There is visibly more noise at 800 ISO. 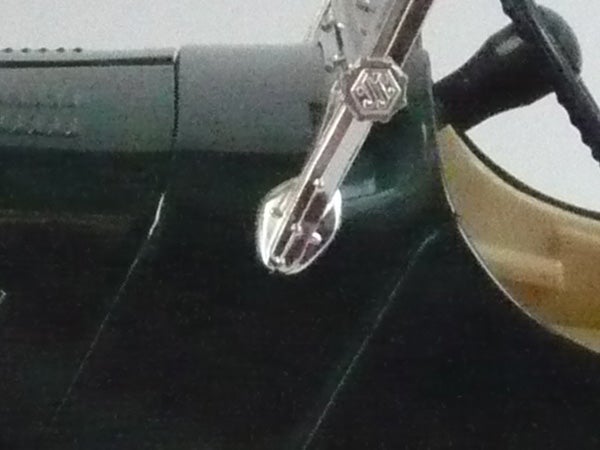 At 1250 ISO it is getting steadily worse. 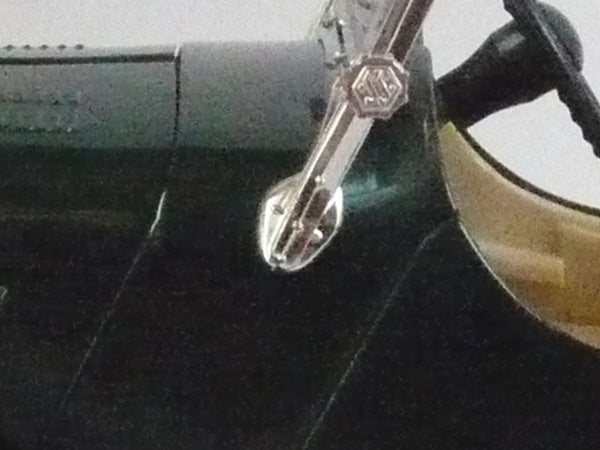 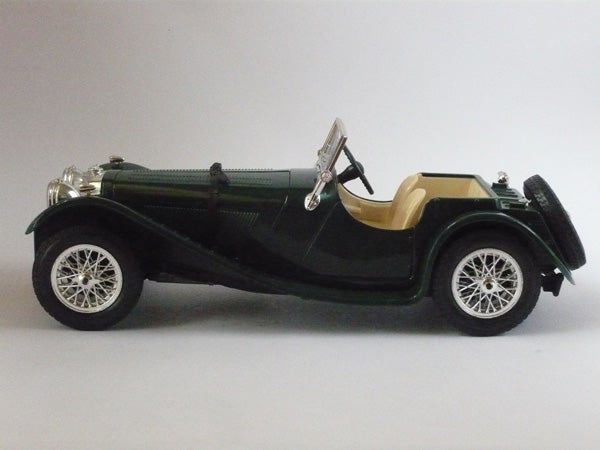 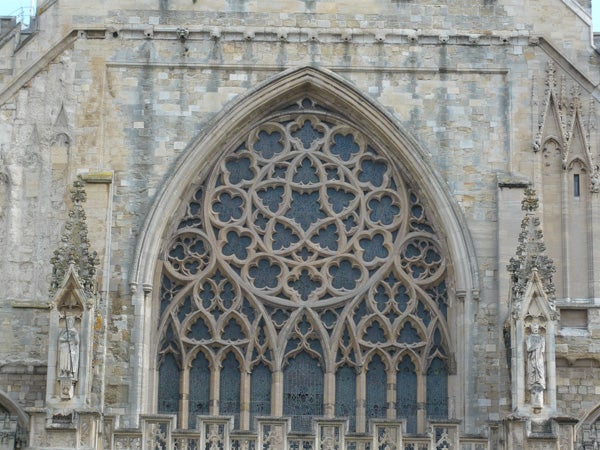 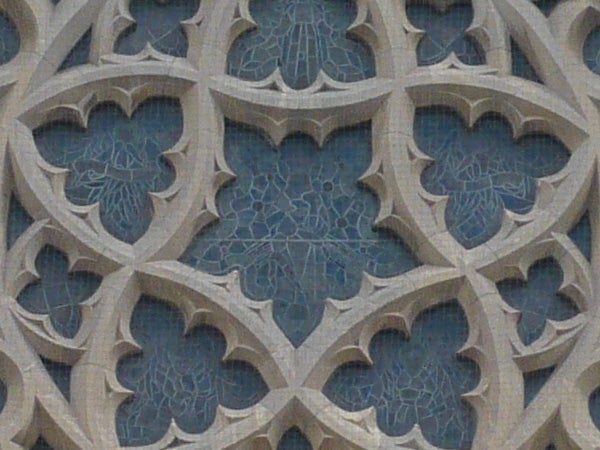 The level of detail isn’t great, but it’s about average for an 8MP camera. 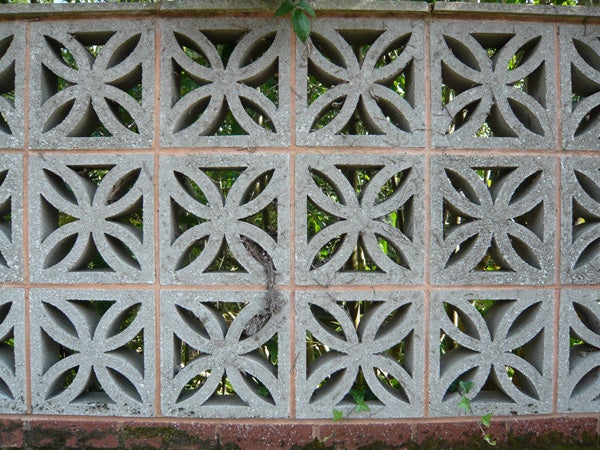 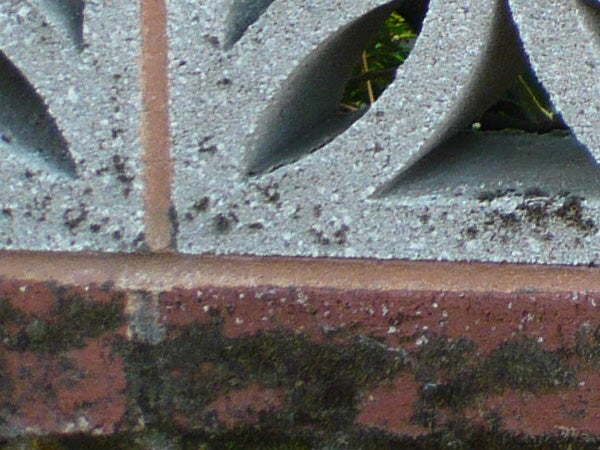 This corner crop from the image above shows that the excellent sharpness of the Leica-branded lens extends right into the corners. 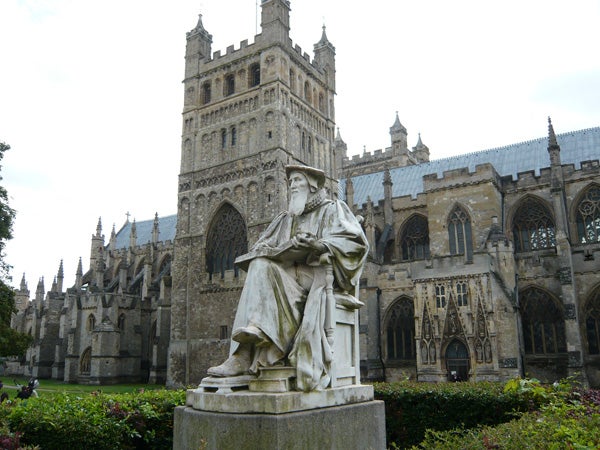 In this wide-angle shot, taken on a day with a clear blue sky, the limited range of the tiny sensor has caused it to burn out to plain white. The 28mm lens is useful for capturing wide scenes though. 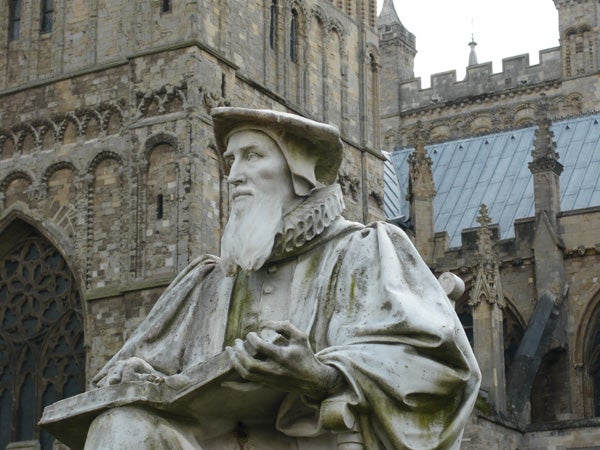 This was taken from the same spot as the wide shot above. The telephoto end of the zoom is equivalent to 100mm. 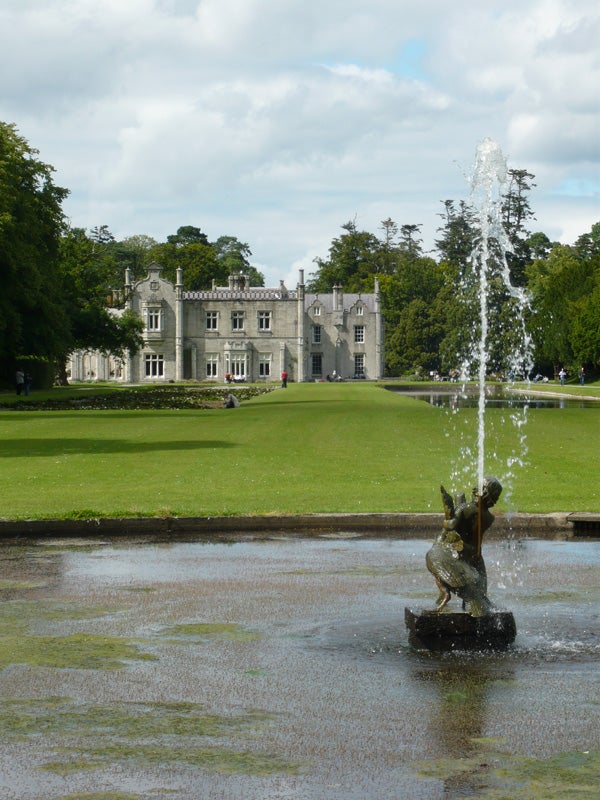 The versatile lens makes for some nice creative compositions. 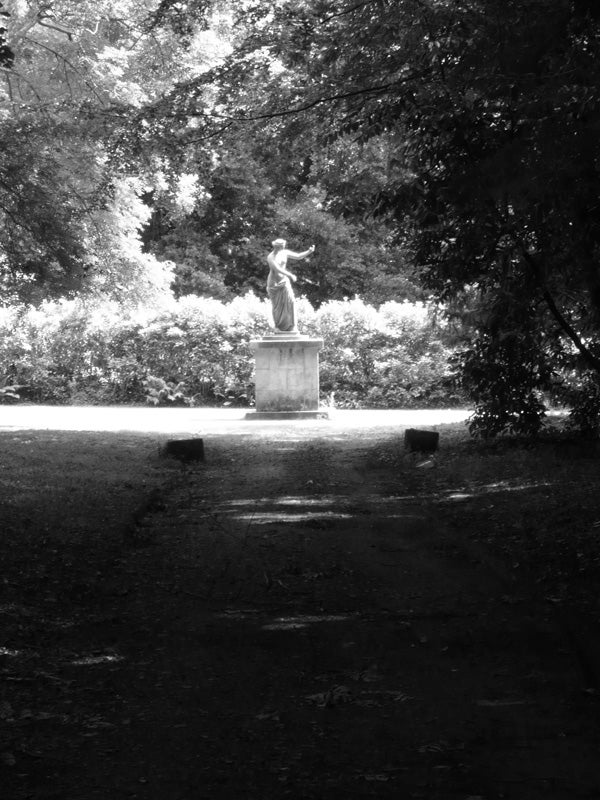 This shot would have been better with greater dynamic range. As it is, the highlights are over-exposed and the shadows lack detail. 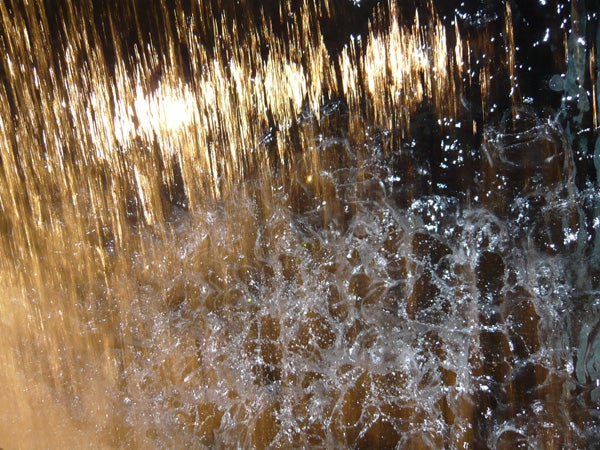 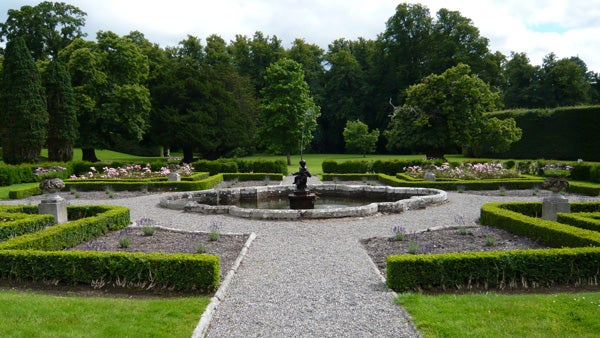 The 16×9 widescreen mode is good for panoramic views.