For several years now Panasonic has been trying to muscle in on the ultra-compact style camera market dominated by Casio’s Exilim range, Pentax’s Optio range and especially Canon’s very popular IXUS range. Their main weapon in this assault has been a rapidly changing series of mid-to-high level compacts including several 6-megapixel models, namely the FX9, the FX3, and this, the FX01. The three models are very similar in appearance and specification, offering sleek and elegant styling, ease of use and several advanced features, not least of which is Panasonic’s proprietary and technically sophisticated optical anti-shake system, Mega O.I.S. Anti-shake systems are becoming increasingly popular in all types of digital camera, and Panasonic was one of the first to offer this technology in an ultra-compact. The Mega O.I.S. system, which is based on moving optical elements in the lens-sensor lightpath, has proved to be effective and reliable. 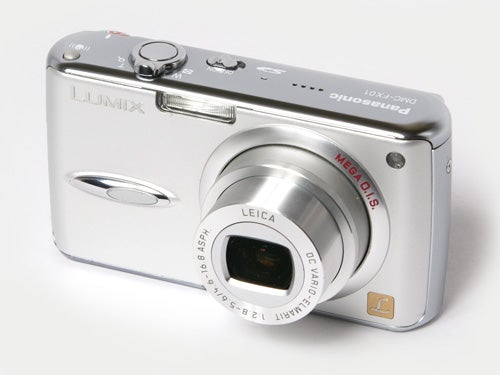 The FX01 shares most of its internal components with the FX3 which I reviewed in November, and in many ways the two cameras are almost identical. The both have the same 1/2.5in CCD, 6.37 megapixels (6.0MP effective) CCD sensor, the same 2.5in, 207k pixel TFT high-angle LCD monitor, and identical control layouts. The body designs are slightly different though, with the FX01 having a more rounded shape, and less of the Leica-esque 1930’s retro look. Personally I prefer the appearance of the FX01, in fact I ‘d go as far as to say I think it’s one of the most attractively styled cameras on the market. 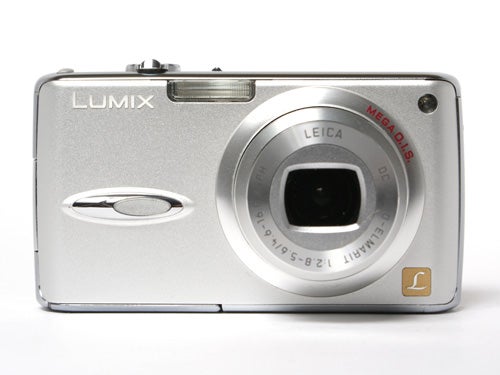 The good looks are more than skin deep too. Like the FX3, the FX01 has a solidly made aluminium case, solidly-mounted controls and a lens that retracts fully flush with the camera body. Measuring just 94.1 x 51.1 x 24.2 mm it’s not quite the smallest camera on the market, but it’s pretty close. It only weighs 153g including card and battery, so it’s definitely shirt pocket portable.


As with the FX3, the control layout is nice and simple, but then the FX01 is a very simple camera. Main shooting modes are selected via the small partially-covered dial on the top right. It has only six positions, including playback and movie mode. Shooting options are standard auto mode, ‘simple’ auto mode, macro focusing and scene mode, which enables the user to select from 17 scene modes including all the usual choices (portrait, landscape, sports, night portrait etc.) as well as soft-focus portrait, starry sky, two modes for photographing babies complete with imprinted age, a high-sensitivity mode and an underwater mode for use with the optional underwater housing. 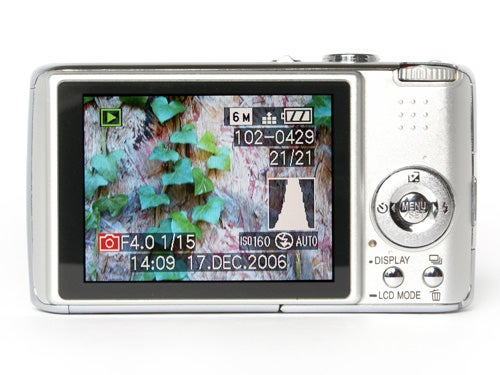 The zoom control is a rotary collar around the shutter button, which I like, and the power switch is literally that – a simple slider switch, simple and easy to operate even while wearing gloves.

The Mega OIS system defaults to ‘on’ when the camera is first used, but can be manually de-activated via a small button on the top panel. It has two operational settings. In the first mode it operates continuously and affects both the live monitor view and the final picture. In mode two it only operates when the shutter is pressed, but has a more powerful effect. This is the default mode, and the most useful. In practical use I was able to take sharp hand-held shots at 1/15th of a second on a medium zoom setting, which is quite impressive.


Other picture controls are quite limited. The only unusual one is a menu option to select the aspect ratio, either a TV-sized 4:3, a 35mm-sized 3:2 or widescreen 16:9. However since both the latter two settings crop the image from the full-frame 4:3 ratio, they are less good for overall image resolution. 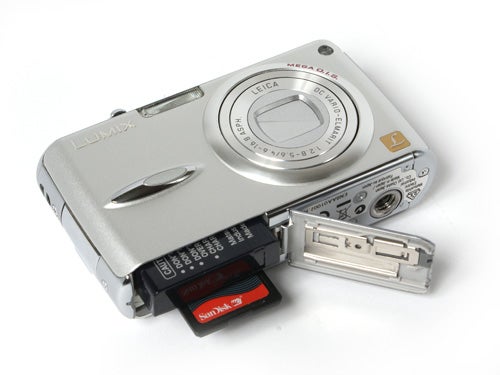 The feature which sets the FX01 apart from its almost-identical twin is its 3.6x optical zoom lens which covers a focal length range equivalent to 28-102mm. There are very few compact cameras with such a wide angle lens, most having only the equivalent of 35 or even 38mm. The unusual dual-lens Kodak V705 which I reviewed last month has an ultra-wide 24mm lens, but it is a physically larger camera. This wide-angle facility makes the FX01 a very useful camera for large group photos or panoramic holiday landscapes, exactly the sort of thing for which people buy a pocket compact in the first place.


The FX01 has another unusual feature related to the zoom lens, and one which I find rather puzzling. It has “Extra Optical Zoom”, which means that as long as you’re not using the maximum picture size the zoom range extends to 5x, giving it a maximum telephoto length equivalent to about 140mm. I have to admit that I’m not entirely sure how this works. It doesn’t appear to be a digital effect, and apart from the fact that you are forced to shoot at a resolution of 3 megapixels (2048 x 1536) there is no noticeable loss in image quality. However the difference between 102mm and 140mm isn’t that great, so is a little extra magnification worth sacrificing half your picture resolution? 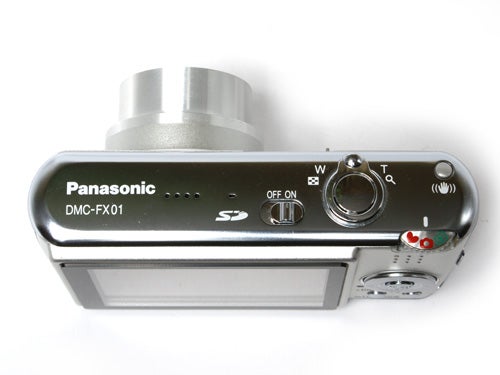 At the highest picture quality setting the FX01 generates JPEG files that average around 2.6MB each, which is slightly below average for a 6-megapixel camera, but does mean that a 1GB SD card is enough for at least 334 shots. 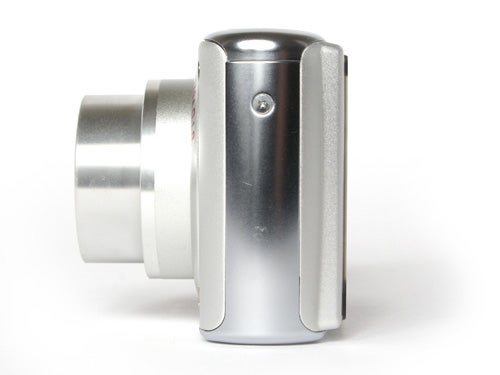 As with the other cameras in Panasonic’s range, the FX01 has a good video mode, shooting at VGA resolution and 30fps with mono sound. 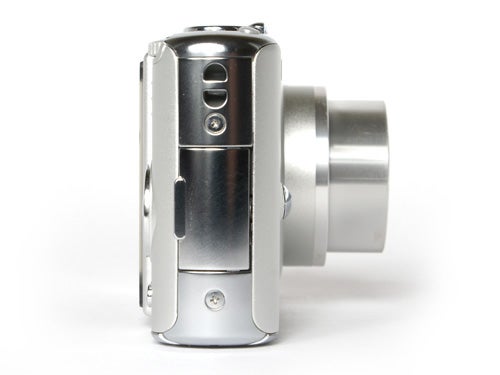 Since the FX01 uses the same sensor and Venus Engine Plus LSI image processor as the FX3, it’s no surprise that image quality is virtually identical. Focusing is sharp and accurate, colour rendition very natural, and image noise is very well controlled up to the normal maximum of 400 ISO. I did find that the exposure meter didn’t like very high contrast situations, especially shooting into the sun. It tended to under-expose rather a lot in such situations, but then so do a lot of cameras. The unusual lens performs well, as it should if it deserves that Leica branding. It did suffer from noticeable spherical distortion at the widest angle setting, but edge-to-edge sharpness was very good with no sign of chromatic aberration.


With its wide angle lens and optical image stabilisation the Panasonic Lumix DMC-FX01 stands out from the crowd of virtually identical 6-megapixel 3x zoom ultra-compacts. It is well made, looks superb and takes very good pictures, with excellent noise control and good low light performance. All in all, a pleasant, simple elegant camera that’s perfect for social snapshot photography. 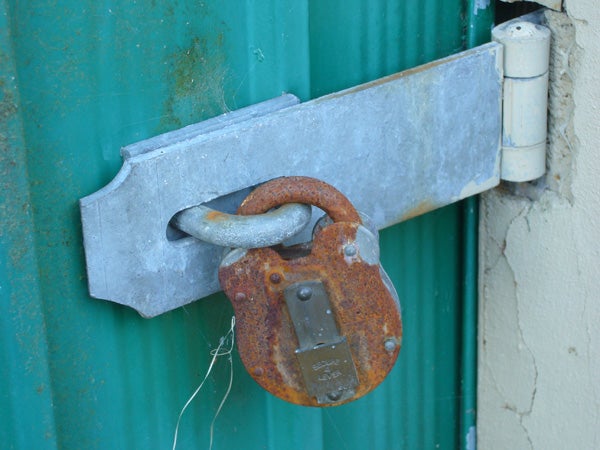 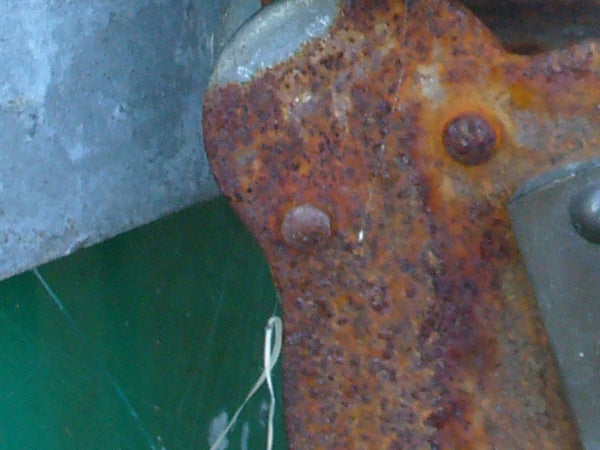 At the minimum ISO (80), the image is noise-free with good sharpness and colour resolution. 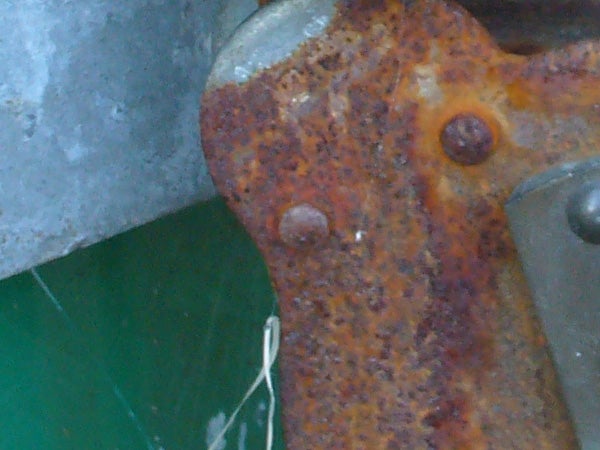 At 100 ISO the camera’s exposure meter has selected the same settings as before, and so the picture is about 1/3rd of a stop brighter. Still no noise though. 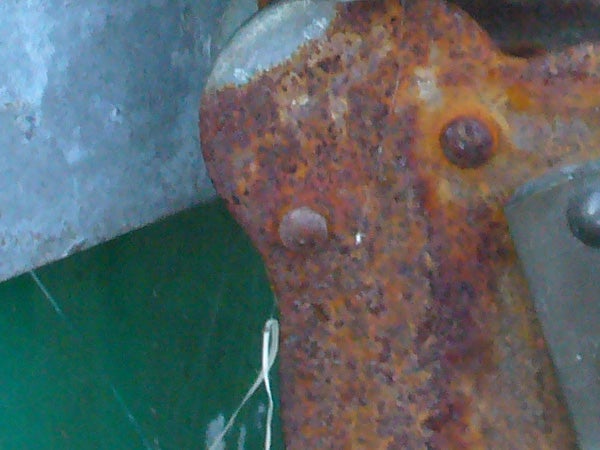 At 200 ISO there is a hint of colour speckling in the mid-tone and darker areas, but not enough to cause a problem at normal printing sizes. 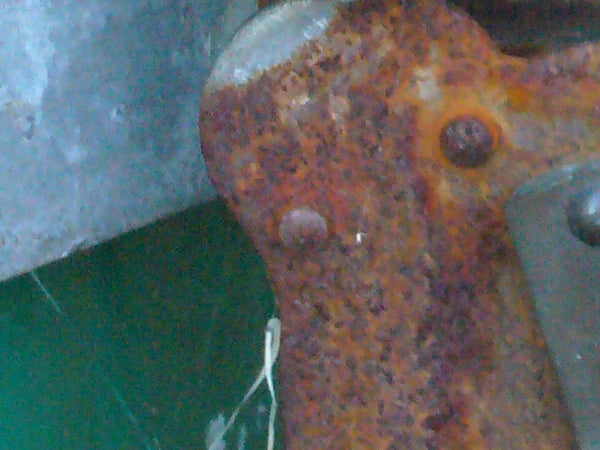 At 400 ISO, the highest that can be set manually, there is a little image noise and colour speckling, but again it is very well controlled and the picture would make a good print.

Taken hand-held at a shutter speed of 1/15th of a second with the Mega OIS system switched off, this shot shows very obvious camera shake.


Taken hand-held at 1/5th of a second again, but this time with the Mega OIS switched on, it shows how effective the system is. 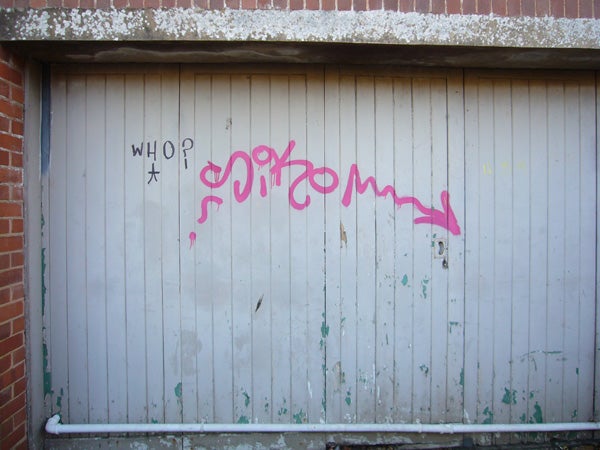 The FX01’s unusually wide angle lens does suffer from some image distortion at its widest setting, as you can see from the curved lines in this image 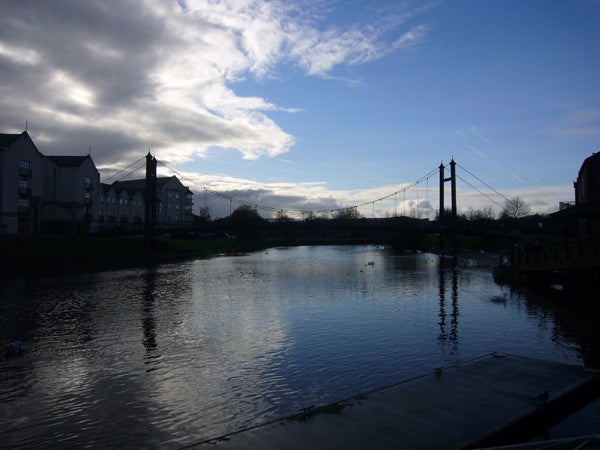 Shooting into the sun, the camera’s exposure meter has under-exposed the foreground. 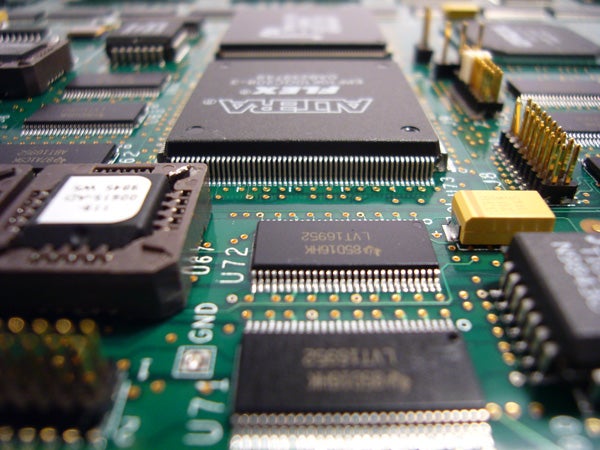 The FX01 has a macro focusing distance of 5cm, not as close as the FX3, but close enough 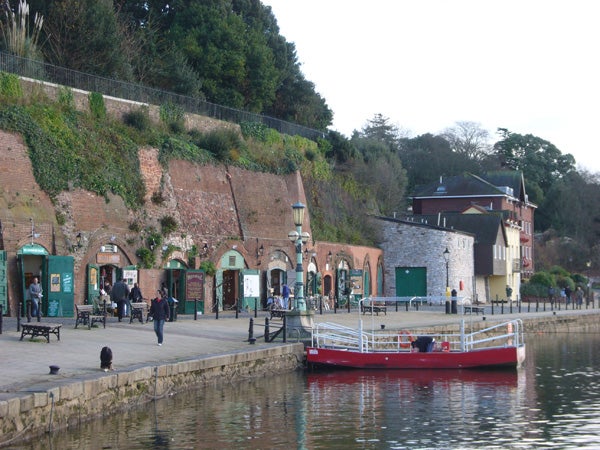 Taken at the maximum telephoto zoom setting, equivalent to 102mm on a 135 film camera. 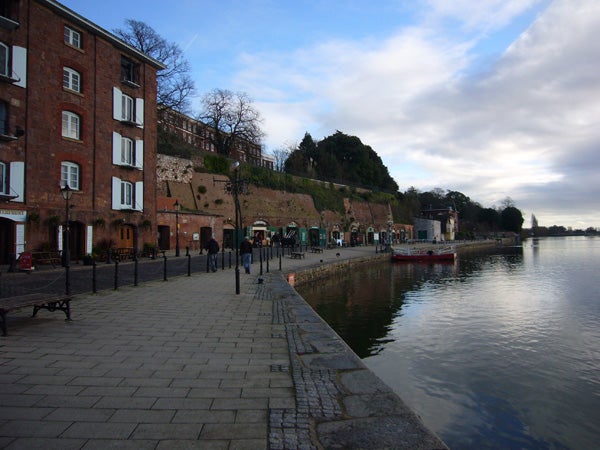 Taken from the same position as the shot above, this shows the excellent coverage of the FX01’s 28mm-equivalent wide-angle setting.