Panasonic’s new flagship LCD TV, the TX-L55WT60, was named as an International CES Innovations 2013 Design and Engineering Awards Honoree at this year’s CES show – a pretty remarkable achievement for a brand that until 2012 was widely considered to be well off the pace in TV design terms.

And the L55WT60 is fully deserving of its CES plaudit, for it really is a gorgeous-looking thing. Its appearance is based around two concepts: the Metal & Glass materials approach Panasonic introduced in 2012, and a new ‘floating’ concept designed to make the picture look like it’s floating in mid-air.

To put this in more prosaic terms, the TV carries an incredibly slim bezel that’s well under 1cm across, and wears what little of it there is extremely well thanks to its glinting metallic finish. It also sports a fetching transparent ‘wing’ protruding for an extra couple of cm from its bottom edge, and best of all, its stand is completely transparent apart from a lovely metallic outer trim.

It’s the combination of all these elements – especially that unique stand – which creates the ‘floating’ impression. Those who like to look at the back of their TVs might also like to know that the L55WT50 sports a white posterior, contributing further to its sense of physical ‘lightness’.

In spec terms, the screen is, of course, a full HD affair, driven by edge LED lighting. As with last year’s WT50 models, moreover, the L55WT60 enjoys local dimming, where parts of the edge LED lighting array can be controlled individually to deliver better image contrast. This is apparently a much improved local dimming engine, though, driven by a more powerful processing engine.

The WT60 also uses an IPS panel and so can be watched from a wider angle than most LCD TVs without losing contrast or colour saturation. It meets the new Energy Star 6.0 certification too, making it one of the most eco-friendly TVs seen to date, while motion reproduction should benefit from a ‘4200 BLS’ system courtesy of Panasonic’s latest combination of backlight scanning, a native 200Hz refresh rate, frame interpolation, and a new black insertion method. The processing benefits from a dual-core processor complete with Panasonic’s new Hexa processing engine. 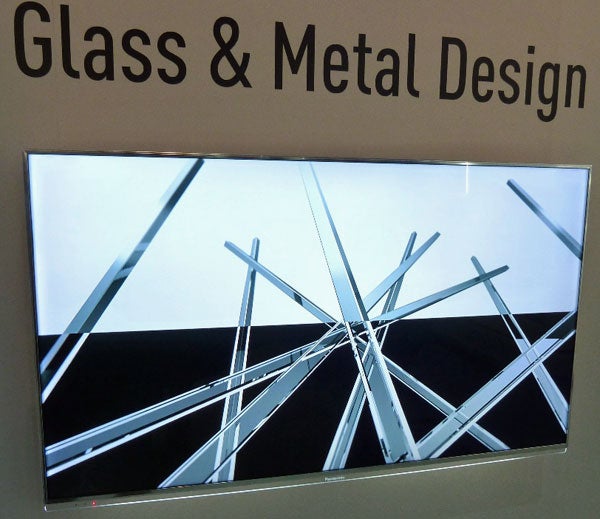 Aside from its startling new design, though, the most surprising feature of the L55WT60 is its move to passive 3D from last year’s active system. In fact, all of Panasonic’s 3D LCD TVs this year now use passive technology – a startling shift considering Panasonic’s previous championing of the active 3D format. Maybe Panasonic figures that the sort of people interested in active 3D will be more inclined towards its plasma models.

The L55WT60 supports the ‘My Home Screen’ Smart TV personalisation system already discussed in our hands-on with the Panasonic P60ZT60. We could add here, too, that the L55WT60 features some impressively advanced interactivity with iOS and Android devices, including improved ways of controlling the TV and sharing – and even saving content between your TV and your phone or tablet.

The L55WT60’s pictures impressed greatly on the CES show floor. Particularly note-worthy were its brightness levels and colour reproduction. So far as brightness was concerned, its pictures really punched through the bright lights of the show floor, grabbing attendants’ attention more aggressively than even those of Panasonic’s ZT60 plasma.

That brightness helps colours pop out of the screen very strongly, but along with this it’s immediately clear that colours enjoy both a wider tonal range than usual, and are produced with exceptional subtlety that helps pictures look more nuanced – meaning the image looks complete free of even the slightest sign of any colour striping.

Pictures look exceptionally detailed and sharp too, even when showing moving footage. Presumably this is down in part to the new motion processing the WT60 carries – though to be clear, we weren’t able to adjust the TV’s settings so we can’t confirm what level the processing was operating on. What we can say, though, is that with the (admittedly fairly undemanding) test footage on show, the motion processing seemed able to do its business without causing too many unwanted side-effects.

The Panasonic L55WT60 was let down by the rather clumsy nature of its reproduction of dark scenes – and the exceptional slimness of the L55WT60’s frame also has us concerned about the potential for backlight clouding. But while it’s always difficult to judge these sort of things under the light of a show floor while watching specially created content show-reels, there was enough dark material in the reel to allow us to feel that the L55WT60’s black level performance really is much better than that of its predecessor, in terms both of the depth and uniformity of its black reproduction.

The L55WT60 is up against some serious competition from its LG and Samsung rivals in particular at the CES. So it’s a testament to Panasonic’s efforts that its new flagship LCD TV certainly doesn’t feel outpaced in design, picture quality or even ‘smartness’ terms.