I must admit that I felt disappointed. When our esteemed editor originally suggested that I look at Panasonic’s latest rugged phone, I had high hopes of seeing something big, armour-plated and rubbery; the sort of thing that I could cheerfully drop from a second floor window, splatter with mud, immerse in the local leech-infested waters and run over with a tank (well, an old Toyota Yaris, anyway). Instead, the KX-TG6481ET is a rather ordinary looking DECT answerphone and base station combo, with a conventional design, a minimal approach to rubbery materials and an attractive, understated black styling. It was as if I’d ordered the phone equivalent of a Crank-ed up Jason Statham, and got the slicker and more stylish Clive Owen model by mistake. 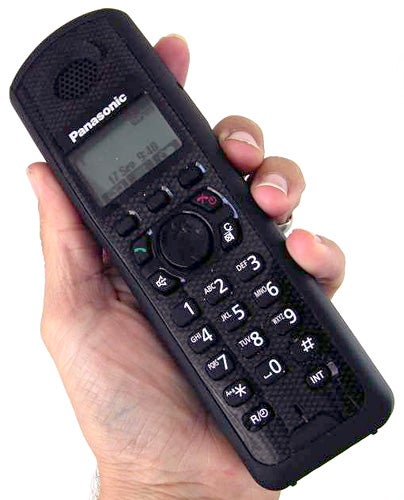 Of course, while Clive might be a little more suave than ”The Transporter”, he’s hardly a wuss himself. And so it goes with the KX-TG6481ET; it’s actually one tough little handset. It offers dust and water protection up to the European IP54 standard, meaning it can cope with anything up to the kind of dusty conditions you would find in most industrial locations, and that it’s built to withstand drips, sprays and splashes of water, though not total immersion or a high-pressure jet. In other words, you’ll have no problems using the phone in a sawmill, on the building site or in the rain, but you might want to think twice about using it in the middle of a sandstorm in the Gobi desert or while surfing, scuba-diving or wandering around in the middle of a flood. I suspect this won’t be an issue for most of consumers, or for 90 per cent of the business users the KX-TG6481ET is also being marketed towards. 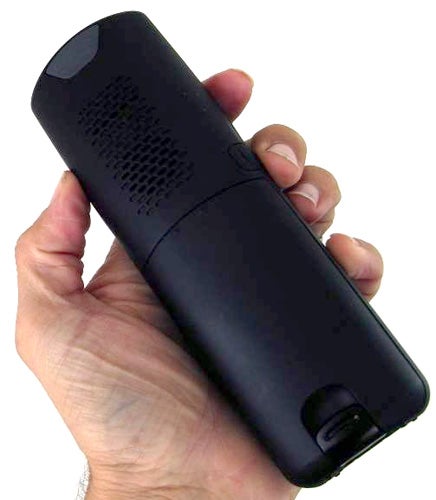 What’s more, the KX-TG6481ET has also been shock proofed. Panasonic doesn’t provide any figures for exactly what this means, but it’s clear from the tough plastics used in the construction and the rubberised coating on the area around the face that the phone can take its share of knocks. The rubberised areas also make the phone particularly grippable, which I’m sure comes in handy in outdoor or industrial applications (not to mention domestic garages, kitchens and bathrooms). A clip keeps the battery cover firmly in place, and there are study grills over the main ear speaker and over the secondary speaker on the back of the unit. Build quality seems excellent throughout.

Well, I wasn’t going to leave Panasonic’s claims untested. I can happily report that the KX-TG6481ET has survived both immersion in an enormous bag of dirty gravel, and a run under the tap afterwards to wash it off. It’s also survived being dropped and tossed onto a selection of surfaces and floorings, including kichen vinyl, concrete, tarmac, parquet and pine decking. 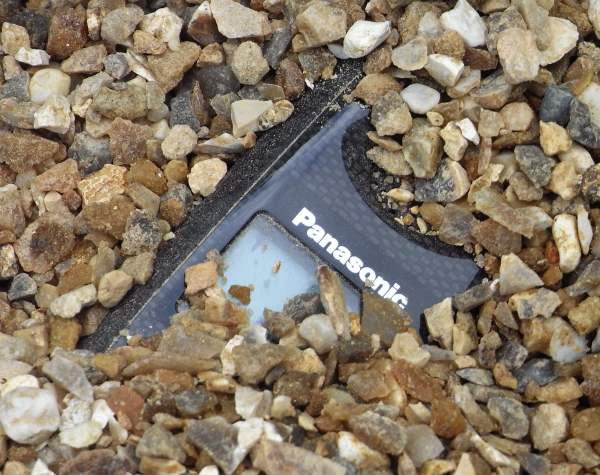 More impressively, it’s also survived over a week in the company of a three year-old tearaway, who showed no scruples about dropping the phone, letting it roll down the stairs or leaving it on the table during lunch before tipping a cup of water over in the near vicinity. At no point has the phone taken on anything more than the lightest of scratches. Nor has the battery cover flown off, spilling the rechargeable AA cells all over the floor. If only the same could be said of several other electronic devices that have suffered at the hands of the miniscule marauder over the last year or so. 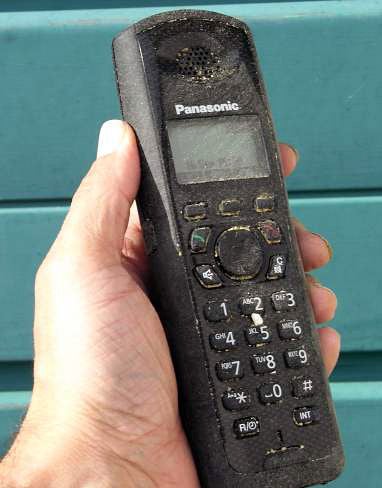 Of course, there’s no point in having a tough phone if it’s hard to use or lacking standard features. Luckily, in both respects the KX-TG6481ET fares well. A d-pad and a trio of buttons at the top of the keypad handle most of the navigational duties, the three buttons changing function according to the current mode or menu, with reasonably straightforward icons explaining what the current functions are. Inputting numbers to the phonebook or setting up ringtones are simple, intuitive operations. The five line monochrome LCD display isn’t too exciting to look at, but the menu options are clear enough and there’s an amber backlight behind this and the keypad to make the phone usable in dark or gloomy conditions. A 3.5mm jack sits hidden beneath a rubberised flap on the left-hand side, allowing connection of a hands-free headset. 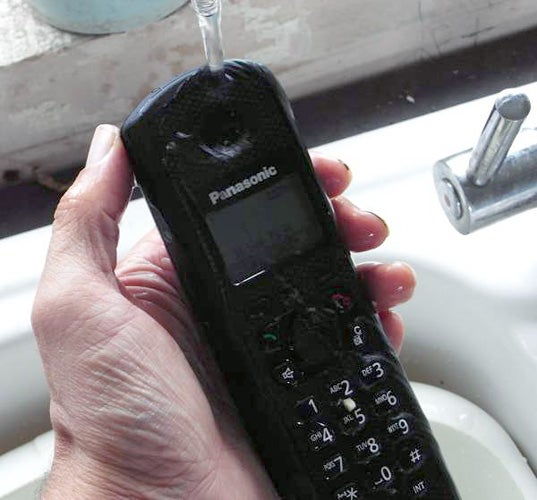 The feature-set is reasonably basic, with no advanced features like an SMS texting service, but there is a speakerphone option and a choice of 15 polyphonic ringtones, at least three of which won’t drive you up the wall within the first day of use. The built-in phonebook handles 100 names and numbers, and you get an answerphone with 20 minutes of recording time. On that front, it’s a little annoying that the maximum number of rings before the answerphone kicks in is seven, but at least you can quickly cut in while the answerphone message is playing with no audible negative effect.

You’ll find buttons for message selection, deletion and playback on the low, rather stylish looking charger/base station, which has its own (rather loud) built-in speaker for ringing and message playback. Each base station can operate a total of six handsets, and the system is compatible with DECT repeaters if you need to extend the range of your phone. 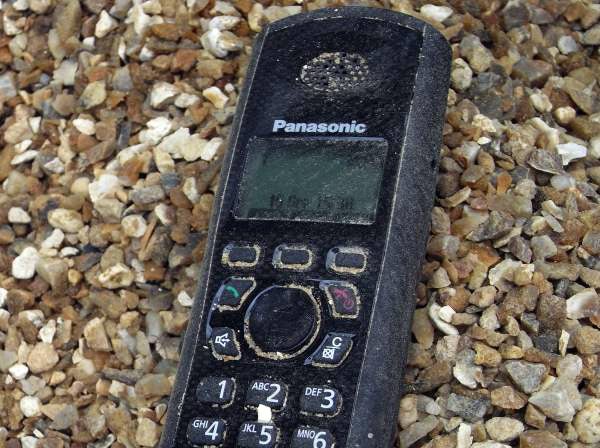 As it is, that range is fairly decent. Panasonic specifies 50m inside and 300m outside. Certainly, I had no problem getting a good, clear line from anywhere inside an average, solidly-built 1950s, three-bedroom detached house, and while I struggled to get anything at the bottom of my garden, that’s probably more because it goes steeply downhill and is packed with a selection of vast and overbearing conifers (though not for much longer) than because of any failings of the KX-TG6481ET base station or handset. On the level street outside the front garden I could make calls from about 60m down the road before the signal started to break up, and with the amount of interference I pick up in our neighbourhood, that’s really not all that bad.


Call quality is nice and clear through the handset, with no noticeable background hiss. And while the speakerphone is – as you might expect – a bit shrill, I didn’t have any problems handling a phone interview with the KX-TG6481ET handset sitting on a table top in front of me. Battery life is rated at 180 hours in standby or 17 hours of talktime, and during a week of use it hasn’t come close to running out of juice – which is a relief if you, like me, are the kind of person who leaves the phone lying underneath the sofa for the best part of a weekend. 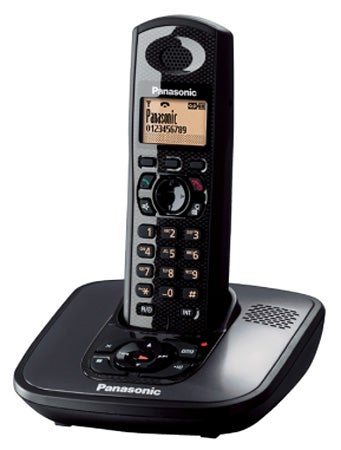 Panasonic also claims that the KX-TG6481ET uses 63 per cent less power on standby than comparable models, which works out at a meagre 0.8W. In short, I can’t find any obvious mistakes or compromises, so if you’re in the market for a new DECT phone, I can’t see any reason to avoid looking at this one.


Of course, the KX-TG6481ET is also a bit more expensive than the average DECT phone. Sizing up the competition, you can easily buy a comparable, non-ruggedised answerphone system for under £40, while £50 will open up the choice to a range of more stylish phones, or phones with more recording time, built-in SMS messaging or colour screens. I’d argue, however, that the ruggedisation is worth the extra cash, particularly if you plan to use the phone outdoors or in hostile conditions, but – to be honest – also if you just want something that can withstand the rigours of everyday, family life.


There is some competition here from the Siemens E495, with its colour screen, SMS messaging and innovative eco features, but this comes at a slight price premium over the Panasonic. If you want a rock-solid DECT phone that’s built to last, and won’t look out of place in your office or home, then the KX-TG6481ET definitely offers good value.


It looks and performs like an ordinary DECT phone, but beneath the surface it’s a rock-hard shock-proof. weather-proof and generally life-proof device.