Panasonic appears to be covering all bases. The company has a camcorder in pretty much every format and type, with the HX-WA10 spearheading its upright options. It’s the waterproof member of the range, with non-waterproof options also available. But it has a few other surprises in store as well.

This is very much a format that sits in between the pocket Internet camcorder and conventional ‘Handycam’ style models. So it has features somewhere in between as well. Panasonic calls this a Dual Camera, because it’s also aimed at shooting still images reasonably well. As such, the WA10 comes equipped with a sizeable 1/2.3in CMOS, with an effective 11Mpixels whether capturing video or stills. The sensor also features back-side illumination technology, where the wiring is located behind the CMOS pixels rather than in front of them, allowing a greater amount of light in, thereby boosting sensitivity. We’ve universally been impressed with the benefits of this technology, so it’s very welcome here.

Some pocket Internet camcorders, such as Kodak’s PLAYSPORT Zx3, have similarly sized sensors. But one feature none of them has is an optical zoom, and Panasonic’s HX-WA10 offers a modest but still useful 5x factor. Panasonic also takes advantage of the extra pixels on the sensor to provide a 12x advanced zoom. This crops into the CMOS frame rather than blowing the image up, so in theory preserves resolution, although you’re still shooting with a reduced area, so light sensitivity will be affected. However, the 60i and 60p modes can only benefit from 6x Advanced Zoom, and you can’t use it all when shooting video. 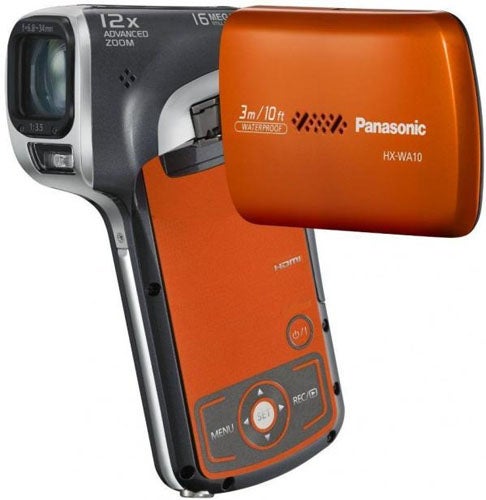 With its upright format, the WA10 is intended to be held a bit like a gun. However, you don’t operate it using your index finger. Instead, the primary functions are accessed using your thumb and an array of buttons on the back behind the lens. Here, you can trigger video recording and take a picture. In between these buttons is a zoom rocker, and beneath a button for toggling the Intelligent Auto mode. The latter detects shooting conditions and attempts to set scene modes accordingly, for example enabling Low Light in poor illumination, and Portrait when it picks up a face. Yes, there’s face detection on hand here, too, which will set focus and exposure according to any human face found in the frame. There’s image stabilisation, too, although only of the electronic variety.

The WA10 isn’t wanting for manual functions, either. However, these are accessed via a D-pad and a couple of extra buttons found beneath the fold-out LCD. There are plenty of shooting modes available, although no 25 frames per second options are included. The WA10 will output at 25 frames/sec over its AV connections, although virtually all modern HDTVs would be fine with 30p or 60i. You can capture video in Full HD at 30 progressive frames per second or 60 interlaced fields, or 720p at 30 or 60 progressive frames per second. Mac-compatible iFrame (960 x 540) and VGA are also available at 30 frames per second, and there’s an audio-only option. But Panasonic hasn’t included any time lapse or high speed shooting.

Still images can be captured at up to 16Mpixels. Footage is not captured as AVCHD, but AVC H.264-based MPEG-4. The top data rate is 17Mbits/sec, and SD memory used for recording. So a 16GB card will be enough for a little over two hours of footage. With support for SDXC memory, cards with 48GB and 64GB capacity are also supported. 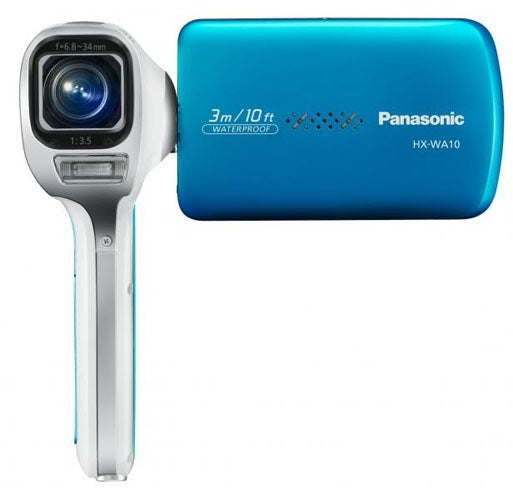 Manual focusing is a little buried, alongside the macro mode. We doubt you’d want to use manual focus very often anyway, as it’s extremely hard to operate with the D-pad. You might not want to bother with macro mode either, as the camcorder seems to do a decent job of detecting very close objects and invoking macro itself when set to Intelligent Auto. You can also call up one of the comprehensive selection of scene modes using the D-pad menu, with the usual options available, ranging from sports to portrait. But it’s also possible adjust both aperture and shutter directly, either via priority modes, or you can set both entirely independently. The range of apertures is not great, stretching from F3.5 to just F8, and you can’t add video gain on top of a fully open iris, unlike most Panasonic camcorders. The shutter speed also spans slightly unusually from 1/1000th to two seconds, with the latter only really useful when taking photos.

The waterproofing is of course one of the key selling points of this camcorder. The WA10 is rated to IPX8 standard, so it can be submerged in 3m of water without mishap. It achieves this with rubber flanges and locking catches on its two flaps. One protects the battery and memory card compartment, the other micro USB and mini HDMI ports. The micro USB port, as well as providing PC data connectivity and charging, also doubles as an AV output, although only for composite video and stereo audio, not analog HD. Unlike Panasonic’s HM-TA20 pocket Internet model, the WA10 is not rated for shock or dust proofing, although the ports are unlikely to let in sand when you’re at the beach. 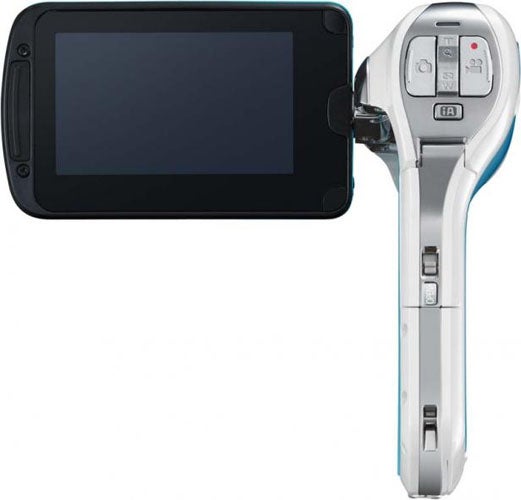 With its large, high-resolution CMOS the WA10 promises better image quality than most camcorders in this price range. In good lighting, the picture is vibrant and has plenty of detail. Performance in poor illumination is the most impressive, however. White balance does become a little inaccurate, erring on the yellow side in tungsten lighting, but otherwise the picture remains full of colour and detail, with very little evidence of grain, down to surprisingly low levels of light. This is particularly welcome, considering the murky conditions you’re likely to encounter when shooting underwater. Photos are also impressive for a camcorder, mostly thanks to the higher sensor resolution compared to virtually all other camcorders. 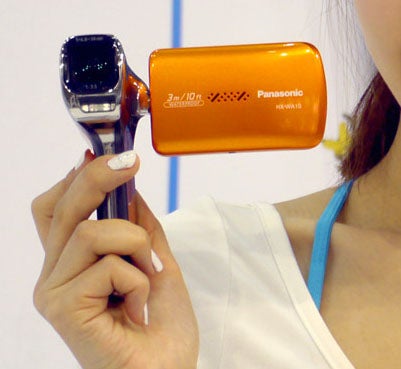 The upright camcorder format won’t appeal to everyone, and the D-pad used for accessing the main settings isn’t the most finger friendly around. The HX-WA10 is also significantly more expensive than pocket Internet camcorders, even waterproof ones. But there’s a proper optical zoom, video quality is better, and still images are far superior to any pocket Internet or similarly-priced Handycam-style model.