What is the Panasonic HX-A500E? 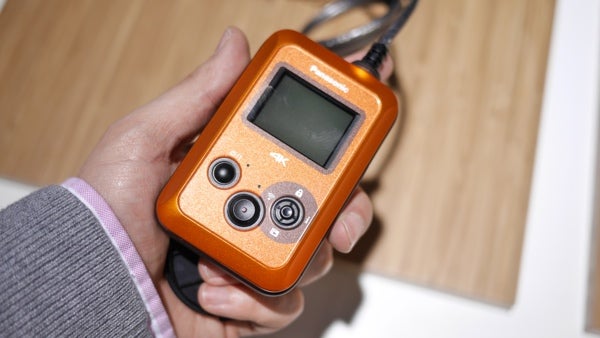 The primary difference from the action camera norm is the
way the HX-A500E is divided into two portions, as we reported in
our first impressions preview. On one end of an umbilical cable is a
fixed lens, sensor and mono microphone assembly, whilst the other
contains the recording system, which houses a 1.5-inch LCD screen and
three control buttons, including a joystick for navigating the menu.
Storage and connectivity is found here also.

The door covering
the Micro SD card slot and Micro USB port slides into place and then has
a separate switch to lock it shut. This allows the whole package to be
rugged to international standards. The HX-A500E is waterproof to 3m and
IPX8 standard, as well as dustproof to IP5X. There’s no particular
standard for impact resitance, although the camcorder is sturdily constructed,
with a thick plastic panel over the LCD screen. This 1.5-inch display
turns itself off automatically after a short period of non-use, which is
a handy power-saving feature.

The
headline 4K recording format is 3,840 x 2,160 at 25 progressive frames
per second, which is essentially four times the resolution of Full HD.
Technically, this is called Ultra HD, rather than 4K, since the latter
is natively 4,096 x 2,160, with a 19:10 aspect ratio. But even
mentioning this feels a little like splitting hairs. The HX-A500E’s 4K
mode runs at a hefty 72Mbits per second, which is well into broadcast
territory, and means you can fit just under an hour of footage on a 32GB
Micro SD card.

You
can also choose between standard and wide fields of view, but only for
the resolutions below Ultra HD. This provides approximately a 160-degree
field of view but causes significant distortion to the image.

The
distortion might not make the HX-A500E so popular with the most
professional end of the market, although here even GoPros have their
weaknesses, with professionals often modifying them with less distorting
lenses, at the expense of a narrower field of view.

The HX-A500E is based on a 1/2.3-inch BSI CMOS with 12.76Mpixels,
which is slightly larger than the GoPro Black Edition’s. This provides
9.03Mpixels when shooting video, and 8.34Mpixels for still images. It’s a
relatively large sensor for an action camera, and promises a noise-free
image with good low light abilities.

It also allows the HX-A500E to
offer image stabilisation and a level shot function, although this isn’t
optical, but digital, and only available at 1080p25 shooting mode or
below. It’s still welcome where most other action cameras don’t have
this facility at all.

Because of its unusual configuration
compared to most of the action cameras we have reviewed before, apart
from
Dogcam’s MiniDVR HD, the bundled mountings are also somewhat novel.

The recorder portion goes into a pouch that is designed to strap to
your arm like your MP3 player when you’re out running. The lens snaps
into a head strap, which includes a sprung metal portion and a
rubberised strip at the front. It’s not the most attractive or unobtrusive
of arrangements, but it does give you quite a bit more control over
where the camera is pointing than most helmet mountings.

The
HX-A500E’s menu does offer some useful settings. Aside from configuring
the recording mode, angle of view, image stabilisation and level shot
functions already mentioned, you can configure white balance. There are
auto, daylight, cloudy and two indoor settings, as well as the user
setting, which you can also set manually.

There’s backlight compensation
available, a colour night view mode, and you can also turn the
microphone off as well as enable a wind cut mode. Slow motion is
available, as well as a loop recording option where the oldest files are
replaced with new ones when storage is full.

Like any
self-respecting action camera, the HX-A500E comes with built-in Wi-Fi.
This can operate in the now-familiar way where the camcorder becomes an
access point that you connect your mobile device to (so no Internet
connection at the same time), after which you can load up the Panasonic
Image App for control. This is available for iOS and Android. However,
it’s also possible to connect the camcorder and mobile device via an
existing access point. 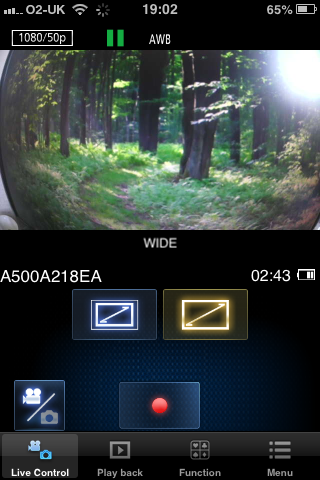 The
app lets you view what the camera is seeing and also toggle record. You
can change the recording format, as well as switching between normal
mode, slow motion and loop recording. You can alter the white balance
settings, turn on the mic and wind noise reduction, plus backlight
compensation and colour night record, so pretty much all the settings
are available.

There are some very limited editing and photo collage
abilities too. The latter lets you arrange up to five photos into a
preset frame, whilst the former lets you grab sections of clips and
stitch them together to create new compositions.

All of this
would be moot if the HX-A500E produced the poor video quality often
found in action cameras. But Panasonic hasn’t skimped on this area. The
4K mode is much more than a gimmick, and produces great levels of detail
as well as rich, accurate colour. The lesser resolutions maintain the
colour fidelity, although naturally lose the fine detail.

As
mentioned before, the wide angle of view option does significantly
distort the image, and there is a level of distortion even without it,
although this is routinely an issue with action cameras, as you do want
to catch as much of the periphery as possible when you’re not able
concentrate on pointing the camera precisely. The HX-A500E also belies
its format in low light, with a bright picture maintained to low levels.
Performance is particularly commendable here for an action camera. 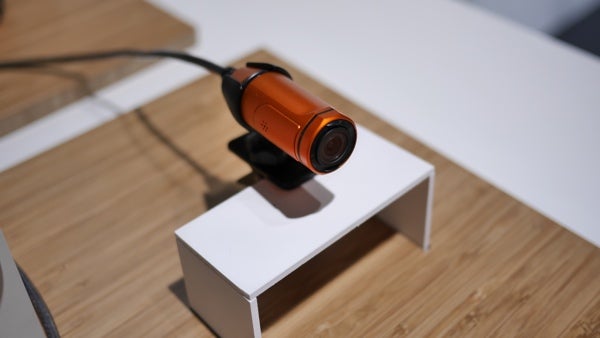 Should I buy the Panasonic HX-A500E?

The
Panasonic HX-A500E is a serious action camera contender. Where there is
a significant divide between consumer and professional in the
mainstream camcorder market, action cameras readily cross over, with
GoPros used extensively in the recent Need For Speed movie, for example.
Alongside this, there’s little doubt that 4K is coming.

Where 3D has
failed dismally amongst consumers, primarily because people don’t want
to sit in their living rooms wearing 3D glasses, 4K could well be
different, since it is simply a direct resolution improvement over HD.
So Panasonic’s HX-A500E is a canny move, providing great image quality
and useful features in a format that is flexible and easy to use,
although the price is currently around £80 more than the GoPro HERO3
Black Edition, so the latter still has the edge on value.

The Panasonic HX-A500E lays down the gauntlet to GoPro, with capable 4K shooting in a rugged, feature-rich action camera format.

Next, read our pick of the Best Cameras