Once set up, the entire
system is handled by the Panasonic app. The app is a little archaic
looking, but reasonably easy to use. The system can be set to one of
three alert settings: Disarm; Arm: Away; and Arm: At Home.

When
armed, the hub activates the the camera’s motion sensor and window/door
sensors. The sensors track motion and sound and instruct the camera to
begin recording when anomalies are detected.

Recorded footage is
stored on a microSD card in the main hub – meaning it’s a good idea to
place it out of reach or hide it, in case tech-savvy burglars spot it
and steal the microSD.

You can also set the app to alert you
when the sensors are triggered, which I  recommend you do. The app
features sub-menus for every connected device, which, when clicked,
offer a variety of commands. 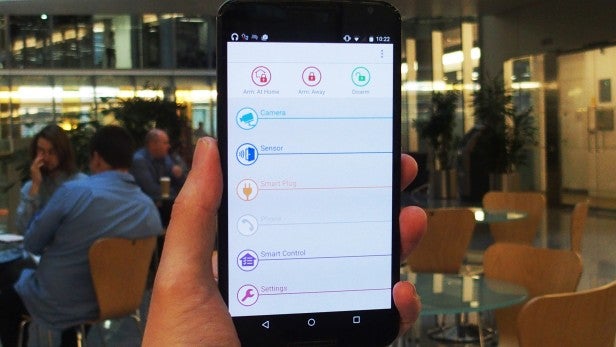 For
example, going into the camera section enables you to see a real-time
view, instruct it to record video, take photos, or use its built-in
microphone to talk to people in the room – a useful feature if you’re
using the system to watch kids or pets while you’re away.

The
camera can also be used as a baby monitor, with the lullaby feature
allowing parents to play one of five preset jingles. Be warned, though:
the preset lullabies sound a little creepy, similar to music featured in
a Wes Craven horror movie.

The smart plug lets you remotely turn on and off whatever is plugged into it.

I
plugged in a lamp. Using the smart plug, I set the hub to automatically
turn on the lamp when I disarmed the system. I also occasionally used
it to remotely turn on the light to make it look like I was home when
the motion sensor detected anomalies. 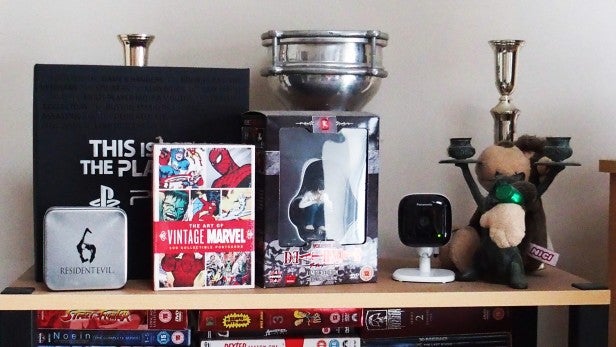 While this all sounds great, there are a few issues with Panasonic’s home-monitoring system.

For
starters, while eight mobile devices can be registered to the hub, only
the first four can be used to control the system. This could be problem
for people living in shared houses or with large families.

Second,
the camera records at a maximum of 6fps at a 640 x 480 (VGA)
resolution. This is disappointing when you consider that the majority of
smart home systems record at 720p. The low resolution was fine when the
camera was recording close-up objects during the day, but it didn’t
perform so well when capturing footage at a distance or in low light.

For
example, when people are more than a few meters away, or the camera is
shooting in the dark, their faces are close to unrecognisable – which
means Panasonic’s kit won’t be all that useful identifying nighttime
intruders.

I also experienced issues connecting to the smart hub.
When on the move, on at least three occasions out of ten the app would
fail to connect to the hub. The problem was exacerbated when I tried to
connect via 4G.

On several occasions I received a remote alert
from the system, informing me that a motion sensor had been tripped,
only to find I couldn’t connect to the camera and check what was going
on. This resulted in causing more than a little undue stress. 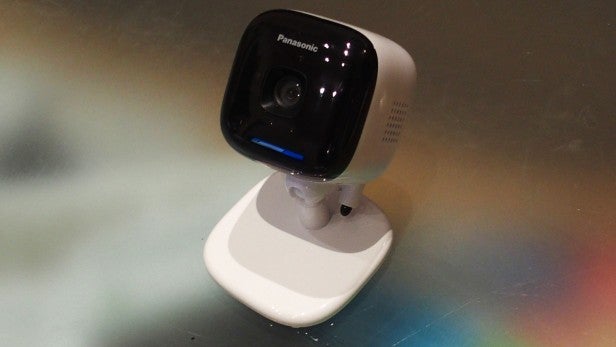 Should I buy the Panasonic Home Monitoring & Control Kit

Overall,
if you want to fully secure your home without having to pay for add-on
devices then the answer is no. There isn’t enough hardware in the
starter kit to fully monitor a two-bedroom flat, and the camera’s low resolution only really works in regular light.

That said, if you want a smart home-monitoring system to remotely monitor kids, or pets, during the day then at £230 the kit offers decent value for money.

This
is especially true when you consider that the Panasonic system doesn’t
charge a monthly maintenance and storage fee, which many competing
camera systems, such as the Nest Cam do.