What is the Panasonic Home Monitoring & Control Kit?

The Panasonic Home Monitoring & Control Kit, or the KX-HN6012EW, is an entry-level smart home kit with an emphasis on security.

It offers solid remote monitoring, but doesn’t include enough hardware – or adequate developed software – to fully secure even a moderately sized flat. 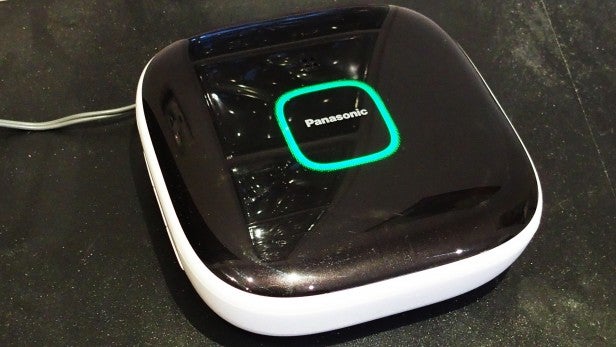 Visually, the units have a uniform black-and-white plastic design that some may feel looks slightly sterile. Personally, I like it – the striking black-and-white colouring helps draw the eye to the cameras, which will hopefully act as a deterrent to potential thieves.

The hub, camera and window/door sensors can all be screwed to the walls. The process isn’t difficult – although you should check that there aren’t any cables or wires running behind the wall before drilling. The 130 x 130 x 42mm hub and 75 x 75 x 102mm camera can also be left freestanding.

Next you have to sync the monitoring system’s collective parts using the hub. This is easy too. Simply connect the hub to your mains and Wi-Fi, then install the Panasonic Home Networking app to your Android, iOS or Windows device.

To do this, fire up the app and run through the on-screen commands – they’ll prompt you to press the hub’s Wi-Fi connector button and pair it with your device. Once complete, the hub then automatically detects the camera, sensors and smart plug and connects to them using the DECT Ultra Low Energy wireless standard. 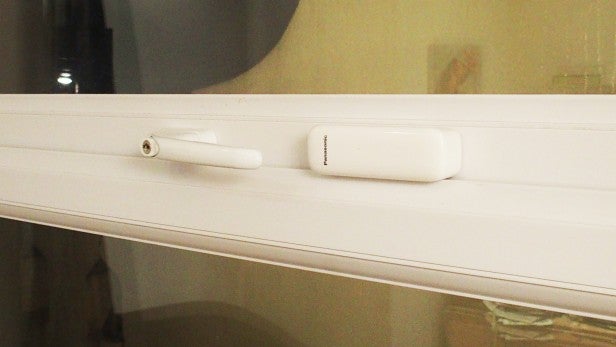 The use of DECT – as opposed to Wi-Fi – is a positive, since it makes communications between the connected devices invisible to most consumer products. This means it will be much harder for devices be hacked. The setup process took only five minutes, which includes the drilling.

However, the brief setup process is in part due to the starter kit not including adequate tech to fully secure even a moderately sized flat. While I didn’t expect much, considering the pack’s modest £230 price, the fact that you get only two window/door sensors and one camera is an issue.

Living in a two-bedroom flat with four windows that face a shared balcony, I had enough tech to secure only one room. I chose the lounge, where I placed sensors on two front-facing windows. The camera was placed on the top of a bookshelf at the back of the room.

The hub is able to sync with up to four cameras and 50 “devices”, meaning you can fix the lack of tech fairly easily if you’re willing to spend more cash. Devices include the window/door scanners and plug included in the pack, as well as Panasonic’s optional smart home siren and motion sensor.

However, with the sensors costing £25 each and the siren around £35 and £40-a-piece, covering a whole flat will quickly turn into a costly affair – especially if you add more cameras, which cost £80 a-pop.

Next
App, Issues and Conclusion Review