The fall of the Flip has taken the wind out of the pocket Internet camcorder genre. But if you just want a cheap shooter you can slip into your jacket or trousers and not worry too much about, this format is still a valid choice. The concept makes even more sense if you throw in a bit of resilience to the elements, because then you really can take the camcorder wherever you like. Sanyo was an early adopter with the Xacti VPC-WH1, and JVC followed suit with the PICSIO GC-WP10A. Since then, we’ve had Kodak’s PLAYSPORT Zx3 and Zx5. But the granddaddy of toughness is Panasonic, and its latest entry into the market is the HM-TA20.

The specifications of the TA20 aren’t that groundbreaking, however. It’s based around a 1/4.1in CMOS with a gross 5.33Mpixels, which is fairly par for the course for a pocket Internet camcorder. Video is recorded at Full HD, 720p, VGA or iFrame resolution, the latter being the quarter-Full HD (960 x 540) format aimed at Mac compatibility. However, all of these operate at 30 frames/sec. The TA20 doesn’t offer a 60 frames/sec option for smoother motion. Digital photography is also available, with VGA and 8Mpixel options, plus both standard aspect and widescreen 2Mpixel choices. Finally, you can use the TA20 as a digital voice recorder, with a range of format options on offer.

All the TA20’s functions are accessed via a 3in touch-sensitive LCD, which uses resistive technology and isn’t the most responsive we’ve come across. It still offers more menu space than Kodak’s Zx3 and Zx5, making it a little easier to operate. Unfortunately, though, the range of settings isn’t so extensive, with no direct control over exposure or microphone level, unlike the Kodak competition. You get a 4x zoom, but it’s only digital, so reduces resolution when used. There is a small selection of digital effects available, including black and white, sepia tone, and soft skin. You can also manually enable low light mode and the built-in LED video light.

However, the TA20 is equipped with Panasonic’s Intelligent Auto system, so will enable low light mode itself if illumination drops sufficiently. This also includes face detection, which is quite effective, although it only controls exposure, not focusing, as this is fixed. There’s an electronic image stabilisation system, too. It’s worth noting that not all the display is used by the live view when shooting video, just the top half. The remainder contains menu options. The only time the screen is filled with video is during the playback of stored files. 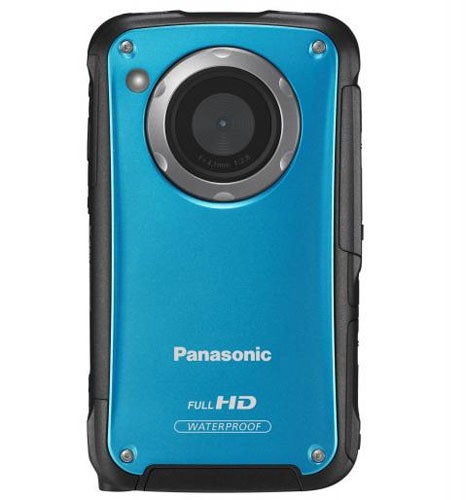 Panasonic has taken account of the fact that it’s hard to use a touch screen underwater, or when using gloves. This is possibly part of the reason for using a resistive rather than capacitive screen. But to make the main camcorder function always accessible, the record button is a physical rather than virtual thing. This is particularly important, as it’s possible to lock the touch screen so it can’t be used, to prevent accidental operation. The screen lock button displays a rather unnecessary array of information every time you press it, but it’s useful considering the extreme environments the TA20 is aimed at.

When it comes to the toughness, though, the TA20 shows Panasonic’s experience at making products able to resist rough treatment. The hardened chassis has the most secure locked doors we’ve seen on a camcorder in this class. Each one has a rubber flange, with a switch securing it shut to ensure a watertight seal. Another switch then locks the first one in place, reducing the chance of accidental opening to virtually nothing. Not one, but two lucky knocks would be required to get past this. The door mechanism and chassis hardening allow the TA20 to conform to a bewildering set of standards, including IPX8 waterproofing, MIL-STD-810F METHOD 516.5 SHOCK damage resistance and IP5X dust proofing. In layman’s terms, this means it can withstand a depth of 3m underwater, a fall from 1.5m onto a wooden surface, and it’s completely impervious to dust ingress.

The box also includes a wrist strap and mini tripod. However, the battery is fully enclosed within the camcorder chassis, and can’t be removed. Amazingly, though, Panasonic has still managed to shoehorn a pop-out USB plug into the TA20 – a feat we’ve not seen in any other waterproof pocket Internet models. It lurks behind one of the sealed doors, with a little button triggering its release. You can then plug the TA20 directly into a computer, although an extension cable is also included. Under further doors can be found mini HDMI and a headphone minijack. 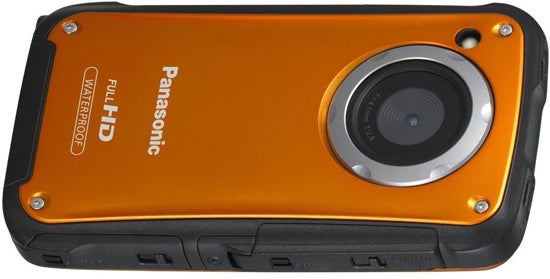 As always with a camcorder in this class, there’s editing software built right into the device itself, which installs on a host system when you first attach the TA20 via USB. This is HD Writer PE 2.0, which offers simple facilities to copy video from the device to your computer, and upload files to YouTube and Facebook. But it also lets you trim clips, place them in a sequence, add titles and transitions, and then output the results. However, HD Writer PE 2.0 is only compatible with Windows, and no Mac software is supplied.

With its reasonably sized sensor, the TA20 provides the level of video performance we’ve come to expect from pocket Internet camcorders – in other words, better than the price implies. There’s a good level of detail and colour is quite saturated but not inaccurate. Performance in poor illumination is also commendable. It’s not the best we’ve ever seen, but the low light mode gives the brightness a boost without obvious sign of grain. The TA20 performs well enough underwater, although there’s no filter available to counteract colour shift so the camcorder has to rely on its automatic white balance.

Taken purely as a pocket Internet camcorder, Panasonic’s HM-TA20 is decidedly average. It shoots decent video, but apart from the built-in video light it doesn’t have a particularly class-leading feature set. It’s a different story when the headline features of waterproofing and shock resistance are taken into account. In this respect, the TA20 is clearly top of the pack, with the most confidence-inspiring locking mechanisms on the market, belying its budget pricing. So if you’re just after a pocket Internet camcorder, there may be alternatives with more fun creative options available, such as Sony’s Bloggie Touch MHS-TS20K. But if you specifically want a camcorder that can take a licking and keep on clicking, the Panasonic HM-TA20 should be top of your list.