The success of the pocket Internet camcorder has proved that people do want to shoot video; they’re just far less interested in the details of how they shoot it than with still photography. So mainstream manufacturers have found they have to join in. JVC has a growing range of PICSIOs, and Sony is now on its second round of Bloggies. Now Panasonic has thrown its hat in the ring with the HM-TA1.

At first glance, the HM-TA1 diverges very little from the pocket Internet camcorder genre. It has the same upright format, with few buttons or controls. There’s a D-pad for menu operation, a power button on the side, and a couple of buttons for toggling playback and digital camera modes. The most positive common features are present, too, with a decently-sized 1/4.1in CMOS at the helm, sporting 5.33Mpixels. This isn’t quite as large as the sensors JVC and Sony are using in their latest pocket Internet camcorders, but it’s bigger than a lot of entry-level fully featured camcorders, which bodes well for low light performance. 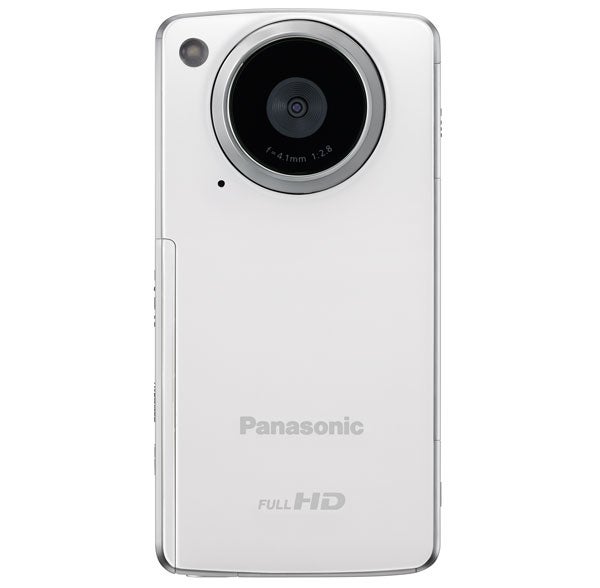 A variety of video format options are available. There’s 1080p Full HD on the menu, but also 720p and VGA (640 x 480). Strangely, whilst Full HD runs at a reasonably healthy 12Mbits/sec, the highest data rate actually comes from the iFrame mode, which has a resolution of 960 x 540 but operates at 24Mbits/sec. The key feature of iFrame mode is that it’s Mac compatible. The HM-TA1 has no video storage onboard, instead relying on SD memory cards. There’s support for SDXC, so 48GB and 64GB cards will be compatible, although you probably won’t need them. A 4GB card would be enough for around 45 minutes of Full HD or over 20 minutes of iFrame mode video. The HM-TA1 also shoots still images, and Panasonic has added a little interpolation to the 5.33-megapixel sensor for 8-megapixel photos at a resolution of 3,264 x 2,448.

As with other pocket Internet camcorders, features are rather few and far between. The HM-TA1 does offer a handful of digital effects, including monochrome and sepia tone shooting, as well as a soft skin option. There’s also electronic image stabilisation, although you can’t turn this off. Other than that, it’s essentially point and shoot, with no option to configure focus, shutter, or aperture manual, nor any scene modes to bias the automatic controls for specific conditions. The 4x zoom is digital rather than optical, too, so reduces resolution. Also, although there’s a port for outputting analogue composite video and mono RCA audio, there is no HDMI connection available nor any way of playing back the HD footage at its full resolution on a TV directly.


With its decently sized sensor and Full HD shooting, the HM-TA1 provides reasonable image quality. In optimal conditions, colour is faithful with no obvious bias in hue. Compared to the 720p footage shot by Flip’s HD models, there’s a lot more detail too. Whilst the level of picture sharpness won’t be giving premium HD models much to worry about, it’s certainly streets ahead of what any camera phone is currently capable of. 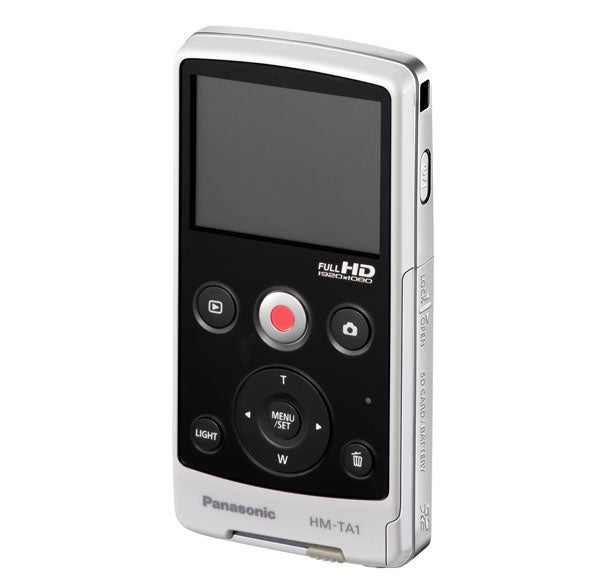 We’ve now become accustomed to pocket Internet camcorders providing brighter, more colourful footage than you might expect in low light, and Panasonic doesn’t break with this tradition. In fact, the HM-TA1 manages more faithful colour in poor illumination than competitors like Flip’s Mino HD, although the image isn’t noticeably brighter. There is some grain evident, but it’s not completely unsightly. So overall the HM-TA1 is near the top of the league for this class of camcorder where image quality is concerned.


As with other pocket Internet camcorders, the HM-TA1 has an integrated USB 2.0 plug, so you can hook it up to your computer without any extra wiring. This slides out the bottom on the left-hand side, where it is hidden behind a flap. It also has software built in, which installs automatically when you first attach the camcorder. This is HD Writer PE 1.0, and it offers the usual modest selection of features. Once you’ve copied files to your system, they can be edited. You can trim or divide your clips, join multiple clips together, add simple transitions, and place titles at the beginning of the sequence. However, for some strange reason there’s no tool specifically for trimming the beginning and end off a clip.

When you’ve finished, you can upload the results to YouTube or Facebook. Alternatively, when you first plug the HM-TA1 into your computer and the software loads, you’re given the option to upload files straight from the device to YouTube or Facebook, without having to copy them to your local drive. 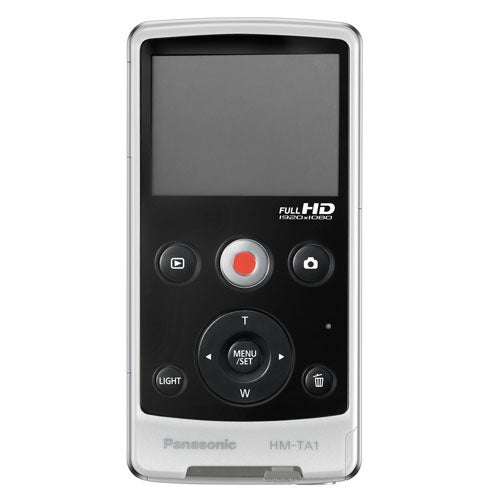 Overall, HD Writer PE 1.0 is on par with what other pocket Internet camcorders offer. Both iMovie and Windows Live Movie Maker far exceed its capabilities, but it’s fine for a quick trim and online upload.


The HM-TA1 does have a couple of novel features. There’s a built-in LED video light, although it only has a range of a couple of metres. Panasonic has also included the ability to operate as a webcam, so you can tether the HM-TA1 to your PC to capture straight into your editing software, or employ it as a high-resolution camera for Skype video calling. 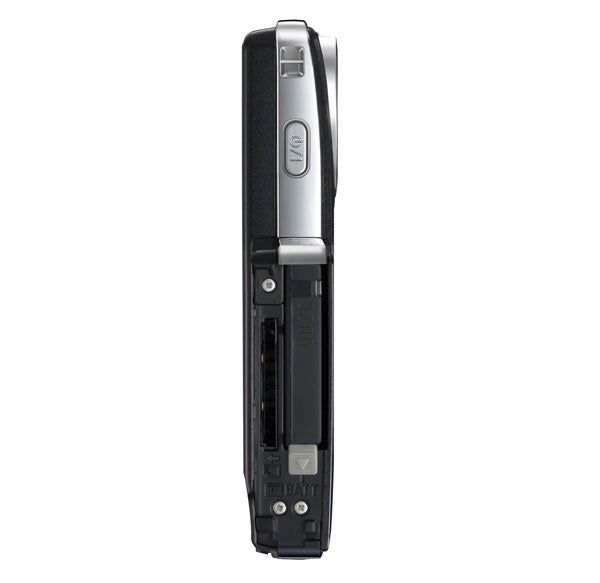 When you switch to this mode, and attach the HM-TA1 to your computer, drivers to use it as a webcam will be installed. The camcorder will then be available within Skype as an imaging device. With its good low-light performance, the HM-TA1 will be quite adept at this function, given the murkiness of many domestic studies.


Apart from the built-in video light, webcam capability, and marginally better low light ability than many competitors, Panasonic’s HM-TA1 is a relatively innocuous pocket Internet camcorder. However, it does have one feature to set it apart from the crowd – its price. At around £85, even when you add the price of a SDHC memory card, you should still pay less than £100. This makes the HM-TA1 one of the best value camcorders in its class.