Lots of people remain sceptical about 3D, including many of us here at TrustedReviews. But 3D movies are now arriving in torrents (probably almost literally…), and if you’re in any way serious about your video-making, you have probably thought more than twice about trying the format out.

Unfortunately, you would likely have felt stuck between a rock and a hard place. Although JVC’s Everio GS-TD1 has made a good stab at an enthusiast’s 3D camcorder – costing around £1,500 – Panasonic’s use of an attachment has limited the flexibility of its 3D-capable consumer models, such as the HDC-TM900.

Up until now, if you wanted something more serious, you would need to shell out over £7,000. Well, not anymore. Panasonic’s £3,000 HDC-Z10000 is still firmly in the professional price range, but it packs in a surprising amount of features for the money.

Clearly, the most important of these is the Z10000’s ability to shoot 3D, and here it diverges healthily from the approach taken by Panasonic’s consumer camcorders. Instead of using a dual lens setup feeding into a single one, and then the single CMOS array, the Z10000 has two entirely separate lens and CMOS paths. Each sports Panasonic’s 3MOS system, so has a trio of 1/4.1in CMOS sensors, with 3.05Mpixels apiece, for a grand total of six sensors. This means that it can shoot two Full HD frames simultaneously, where previous Panasonic consumer camcorders squished two frames horizontally into one, reducing the resolution and very noticeably impairing low light performance. Professional 3D camcorder rigs, and JVC’s Everio GS-TD1, don’t do this. 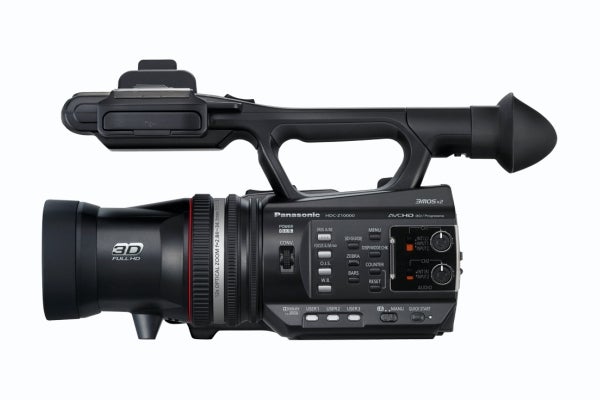 So the Z10000 can shoot 3D in as high a quality as it can 2D. But another piece of technology has fallen into place as the Z10000 has arrived: AVCHD 2.0. This update to the AVCHD standard allows yet higher bitrates, up to 28Mbits/sec, as well as higher progressive frame rates, up to 60p, but most notably it adds support for 3D. This can be at 720/50p, 720/60p, 1080/60i, 1080/50i, or 1080/24p. Our Z10000 test sample, being a European model, only offered the 1080/24p and 50i options here, but interestingly it also offers a 1080/25p 3D setting, which is encoded as 1080/50i – essentially a progressive signal hidden inside an interlaced one. Video is recorded to SD memory cards, as there is no storage built in. However, there are two SDXC-compatible slots available, and relay recording is supported. So even at the top data rate, over ten hours of continuous recording is possible, with two 64GB SDXC cards.

In other words, the Z10000’s 3D credentials are good, but it’s the professional-grade features backing these up that really make it feel like something very special indeed. The lens is non-removable, but it sports three lens rings, for discrete operation of exposure, zoom and iris. The optical zoom provides a reasonable 10x factor in 3D mode, but this rises slightly to 12x in 2D, which can also take advangate of an Intelligent Zoom option to provide a 23x factor. However, the zoom ring is clearly still electronic rather than a direct mechanical connection, as there is a considerable lag between turning it and the zoom action. There is also no discrete conrol for shutter speed, either. Instead, the touch-sensitive LCD is used to configure this setting, although only a few screen presses are required to operate it. You still won’t be able to use it when shooting only with the electronic viewfinder (EVF). 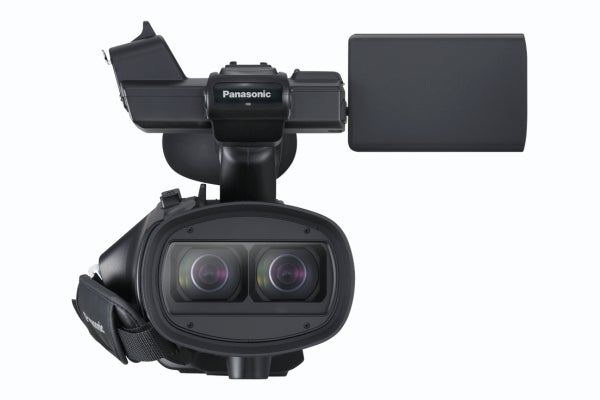 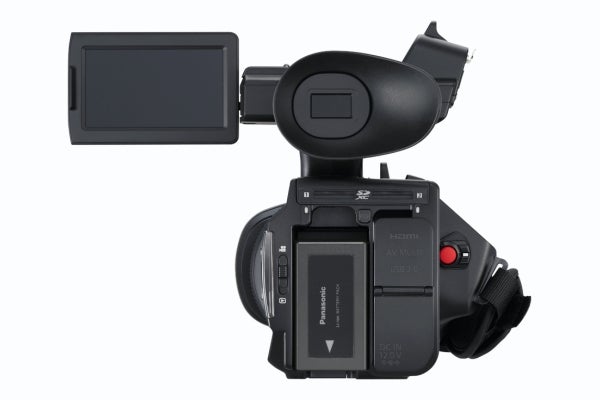 The LCD itself is hidden away in a rather novel position. At first, it appears the Z10000 only offers an EVF. But lurking next to the XLR audio connections is a 3.48in LCD which incorporates parallax barrier glasses-free 3D technology, so you can get a decent idea of how your 3D effect is working. This touch-sensitive panel is used to access the main menu, to change fundamental system settings such as recording format. But a single press brings up a quick menu, which aside from offering shutter control provides options for toggling between viewing modes and selecting one of six user-configurable scene presets. 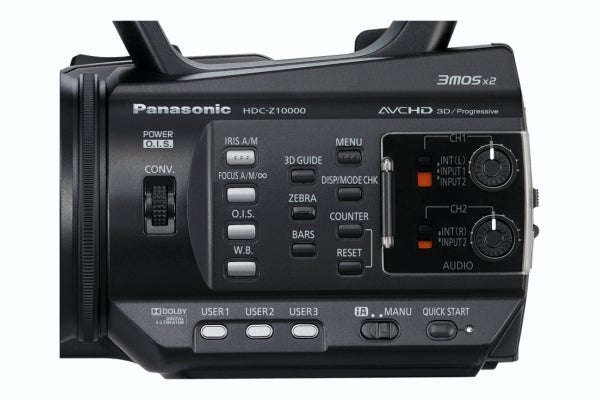 Quite a lot of functions have discrete buttons on the camcorder body, though. Two of these toggle the ring controls for iris and focus, whilst another enables image stabilisation. In 3D mode this is purely optical, but in 2D mode Panasonic’s Hybrid OIS is used, which also adds a modicum of digital stabilisation to smooth out a greater range of camera jerkiness. There’s a button for cycling through the white balance options, which include 3200K and 5600K presets, plus two custom presets, and the ability to lock the current automatically detected setting.

Further buttons toggle zebra, colour bars, and set or reset the counter. There’s a dial dedicated to adjusting 3D convergence, too, so you can ensure the 3D effect works as well as possible. Finally, you can choose between manual mode and Intelligent Auto, which will be familar to users of Panasonic’s consumer camcorders. This detects conditions and sets a scene mode accordingly – handy for those times when there’s no time for manual adjustment.

Unlike virtually any camcorders which sit in a consumer range, the HDC-Z10000 offers balanced XLR audio inputs with 48V phantom power available. So you will be able to connect high-grade audio devices via this professional connection. There are two physical dials available to adjust levels – another essential feature for serious videomaking usage. If you don’t want to use these, though, the built-in microphone array provides 5.1 surround sound, incorporating Panasonic’s usual selection of zoom and noise cancellation functions. 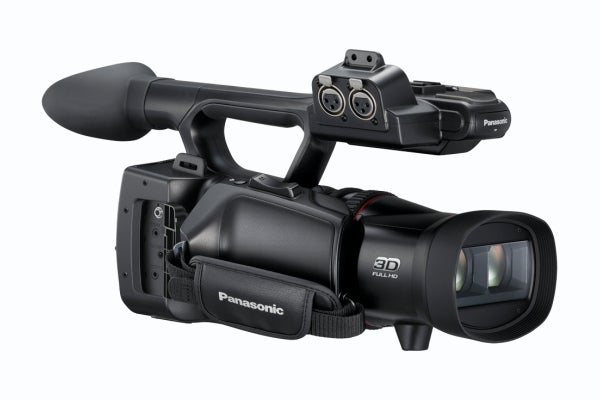 Of course, none of this would be worth much if the Z10000 was mediocre at its core function – shooting 3D. Fortunately, it punches above its weight here. Images are sharp and colours vibrant, with a clear sense of depth. The convergence control lets you dictate which elements of the picture are in front of or behind the screen, giving you the option to create effects where objects “fly out of the screen”. As expected, low light performance in 3D mode is no worse than in 2D mode, which is to say very good, with detail and colour maintained well even at quite poor levels of illumination.

Here is a montage of examples we threw together with the only mainstream consumer editing app we currently know of which can handle AVCHD 2.0 3D footage, https://www.trustedreviews.com/cyberlink-powerdirector-10-ultra_Software_review CyberLink PowerDirector 10 Ultra:

As this footage is on YouTube, you aren’t seeing the full quality that viewing on a 3D HDTV would provide, but at least you can get a general idea of the effectiveness of the 3D depth.

The HDC-Z10000 has a couple of notable niggles – the touch-operated shutter speed control and laggy zoom ring being at the forefront. It will also seem massively expensive when JVC’s Everio GS-TD1 costs half as much and Panasonic’s more consumer-focused devices even less. But it should be seen in the light of full professional 3D models costing £7-8,000. These offer bigger sensors for even better image quality, and extra professional studio features like genlock and HD-SDI digital video output. But independent filmmakers on a budget or students will find this camera provides capabilities never before available at this price. So whilst we remain skeptical about 3D in general, Panasonic’s HDC-Z10000 has taken away the cost barrier for shooting in the format, and that’s a real game changer.