Panasonic’s camcorders have topped our list for videomaking enthusiasts for a couple of years now, with the HDC-TM700 and HDC-TM300 before it. The progression hasn’t been a huge one between each step, but when the core features are all present, there’s not so much to improve. The HDC-TM900 is another incremental enhancement, but it does have features to make it worth choosing over its predecessors.

The most significant difference is the ability to shoot 3D. Whereas Panasonic’s first 3D-capable consumer camcorder, the HDC-SDT750, was a full package including the 3D converter, with this generation Panasonic has switched to selling the VW-CLT1 attachment separately, and merely built in compatibility to key models from its latest range. These include the HDC-SD90 we looked at recently, and the HDC-TM900 on review here. The lens attachment will set you back a fairly hefty £280, but this still makes the combination cost around £200 less than the HDC-SDT750 did when it was released.


The same drawbacks apply, though. Calibration is advisable each time you remove and reattach the adapter, and this takes around 30 seconds. Virtually all the manual features are disabled in this mode, too, including the zoom. So you’re left with a single framing option and automatic exposure. Video is recorded in the side-by-side format directly onto the sensor, effectively using half its area for each of the two stereoscopic portions, so low light sensitivity is halved as well. Nevertheless, in adequate lighting results are decent, with a clear sense of depth, and good colour fidelity, although the level of detail is slightly impaired over 2D footage. 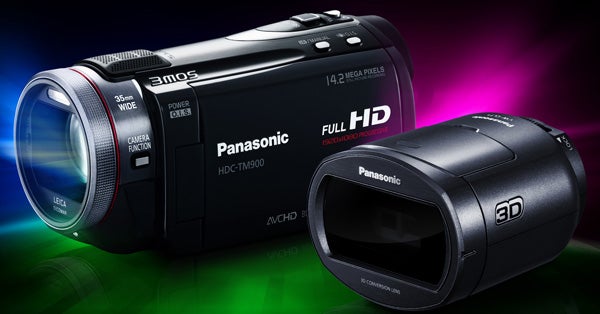 
Other than its compatibility with the 3D attachment, however, the HDC-TM900 is far more of a mild improvement to the HDC-TM700 than a groundbreaking new model. It is very slightly larger and heavier, but this is almost entirely due to the inclusion of a 3.5in LCD instead of a 3in one, which is a trade-off we’re quite willing to accept. Inside, the TM900 has identical specifications to the TM700. It’s built around a trio of 1/4.1in CMOS sensors, each with 3.05Mpixels. The lens has the same specification as well, providing a 12x optical zoom and 35mm equivalent wide angle, so you can capture more of the action at close quarters.


Panasonic has made slightly more use of the extra sensor pixels for its Intelligent Zoom system, however. This now extends the factor to 20x, rather than 18x. In theory, the Intelligent Zoom is better than a traditional digital zoom because it crops into the sensor rather than blowing up the picture electronically, and thereby preserves more detail. The image stabilisation system also takes advantage of the extra CMOS resolution. Now called Hybrid OIS, this combines optical and electronic systems for even greater vibration smoothing. We found this quite effective during testing, at least as good as competitor alternatives, and subjectively it seemed a little better.

The video format options and storage are also virtually the same as before. You can shoot Full HD at 50 frames per second, or AVCHD. The former runs at 28Mbits/sec and the latter tops out at 17Mbits/sec, which is one notch below the 24Mbits/sec maximum available from the AVCHD format. However, since 17Mbits/sec AVCHD works out at slightly more data per frame than the 50p option, since this records twice as many frames per second, it promises marginally better image quality at the expense of less smooth motion. The one addition is an iFrame shooting mode, which is essentially one quarter of Full HD, so records at 960 x 540, and promises Mac compatibility.

There’s 32GB of flash memory on board, which is enough for two and three quarter hours of 50p Full HD or four hours of top-end AVCHD. When this runs out, an SD card slot is on hand for expansion. This supports SDXC, so will accommodate media up to 64GB, although we haven’t been able to confirm whether the recently announced 128GB cards will be compatible.


The TM900 didn’t need any improvements in its manual features. Panasonic has continued its support for the lens ring, which is now a unique feature for its camcorders. Using the mode switch on the side, the ring can be used to configure focus, white balance, shutter, and iris. Otherwise, it provides another means of operating the zoom, supplementing the rocker on the top of the unit. The shutter can be varied from 1/8,000th to 1/50th sec, or 1/25th if auto slow shutter is enabled. The iris options range from F16 to F1.5, with the option to add up to 18dB of video gain on top of a fully open aperture. 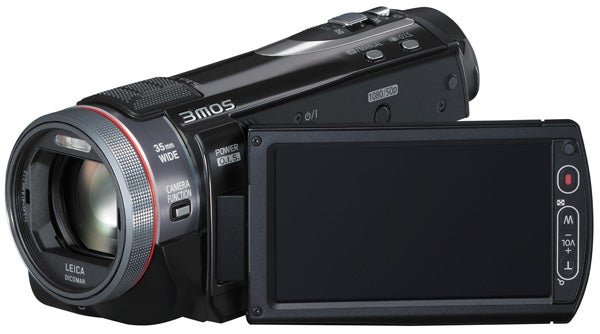 Despite the touchscreen, the TM900 also offers discreet record and zoom controls on the edge of the LCD, which will make two-handed shooting extremely comfortable. Complementing the manual features are minijacks for an external microphone and headphones. As with the last few high-end flash memory Panasonic models, no accessory shoe is built in. Instead, there’s a bracket on the side for an accessory shoe attachment. The latter is standard sized, rather than proprietary, so will be compatible with third-party peripherals.


The HDC-TM900 offers no surprises when it comes to image quality. With an identical sensor array and lens specification to the TM700, video performance is the same. But this is no bad thing, as the TM700 was a leader in this area. Colours are extremely accurate, although perhaps not as vibrant as some manufacturers favour, particularly Sony. Sharpness and detail are also top of the pack. Colours remain accurate to a poor level of illumination, and the TM900 shows very little noise as well. Overall, the TM900 produces one of the best image qualities of any sub-£1,000 camcorder currently available.


Panasonic’s HDC-TM900 offers no revolutionary new features, now that 3D shooting has already started its journey to ubiquity. But like its predecessors it blends excellent enthusiast features, headlined by the lens ring, with supreme image quality. There’s also no significant premium being charged for this new model compared to the outgoing TM700, if you can still find it. So the TM900 takes over from its predecessor as our videomaking enthusiast camcorder of choice.