Where Canon’s HF10, HF100 and HF11 were our favourite camcorders in 2008, Panasonic’s HDC-HS300 and TM300 have topped the bill in 2009. Although Panasonic naturally has new things in store for 2010, the company clearly felt a ‘last hurrah’ for the existing generation was in order. And so we have the HDC-TM350, a limited edition update of the TM300.


There are essentially three differences between the two models. First of all, the TM350 has taken advantage of the ever-decreasing cost of flash memory, and now comes with 64GB instead of 32GB. This means it can store over 8.5 hours of footage even at the top quality setting, which will be more than enough for even quite extended holidays. The TM350 records either Full HD or anamorphic 1,440 x 1,080 HD, depending on quality mode, and the top data rate remains 17Mbits/sec. Panasonic does offer 24Mbits/sec in its AVCHD-based professional models, such as the AG-HMC151E, but hasn’t brought this down to its consumer range yet. 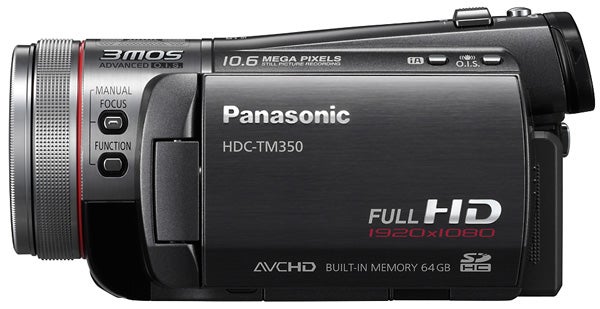 The other two differences to the TM300 are less immediately obvious. The Advanced OIS image stabilisation has allegedly been improved, so the Active Mode is more effective at smoothing out the effects of a walking cameraman. Active Mode is an extra OIS setting.


In Auto, you can choose between standard OIS and Active Mode, and in Manual you can choose either or turn the camcorder off altogether. We found Active Mode did smooth out motion more effectively than the basic setting, although it also appeared to slightly reduce image quality compared to the regular setting when used in non-moving situations, which is probably why Panasonic has left the original mode still available. Panasonic also claims the image processor has been tweaked for mildly improved low light performance. This wasn’t a particular area of inferiority before, however.

To indicate this is a different model to the TM300, the TM350 comes with a slate grey exterior rather than black. But otherwise it is identical, and this is no bad thing as the earlier model was already tremendously well endowed with features. In particular, Panasonic is now the only manufacturer integrating a lens ring into its consumer camcorders, although Canon’s LEGRIA HF S10 offers a handy knob for similar functionality. In auto mode, the TM350’s lens ring provides another, more easily controlled method for operating the zoom, allowing you to switch between different zoom factors more accurately. Press the function mode button on the side of the camcorder, however, and the ring converts to operating manual focus. There’s an assist function as well, which magnifies the centre of the frame so you can get a sharper picture more easily. 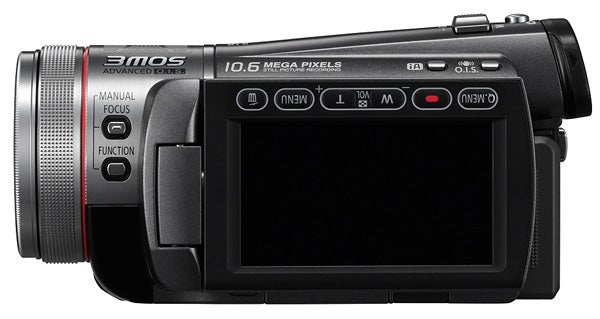 Unfortunately, the lens ring’s functions don’t extend to other manual settings, as they did with the HDC-HS100 and SD100. Instead, these are performed via the touchscreen LCD, unless you are using the viewfinder, when the lens ring still performs these adjustments. The only discreet buttons are for toggling the image stabilisation, Pre-REC video buffering function, and Intelligent Auto mode. The latter is Panasonic’s automated system for recognising conditions and setting the camcorder accordingly. For example, if human faces are found, the face detection system is enabled along with the Portrait scene mode, and the Low Light scene mode when illumination drops below a certain level. 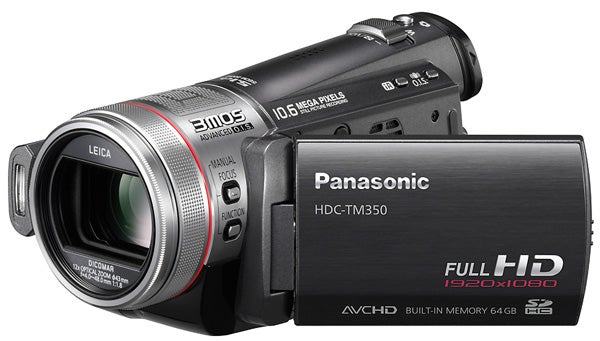 The remainder of settings require navigation via the touchscreen, which is a little fiddly for adjusting shutter and iris. But at least these are not functions you will usually want to adjust continually during a shoot, unlike focus and zoom. The TM350 also offers Panasonic’s AFAE mode, which gives a little more control over focus and exposure without the need for fully manual adjustment, and is very similar to the system Sony has been offering for a few years now. Simply touch the reference point you wish to use within the frame. If the reference point is a face, AFAE and Face Detection will be allied, and this face will be tracked as it moves and the camcorder adjusted dynamically to keep it in focus and properly exposed.


Panasonic has included extra control buttons on the bottom edge of the LCD for triggering record and operating the zoom, which are a major boon when shooting two handed and holding the LCD to steady the camcorder.

The physical features for enthusiast videomakers are also comprehensive. The TM350’s relatively small size means an accessory shoe isn’t built into the unit itself. Instead, a sliding door on the side reveals a bracket for attaching an L-shaped shoe attachment, which is supplied in the box. This is a standard-sized shoe, so will fit any third-party peripherals, and the attachment locks securely into place so you can leave it on if you use it regularly. Otherwise, you can store it in the box so the camcorder is lighter and sleeker. The TM350 also sports the requisite minijacks for an external microphone and headphones, although manual audio controls require a trip to the full menu. 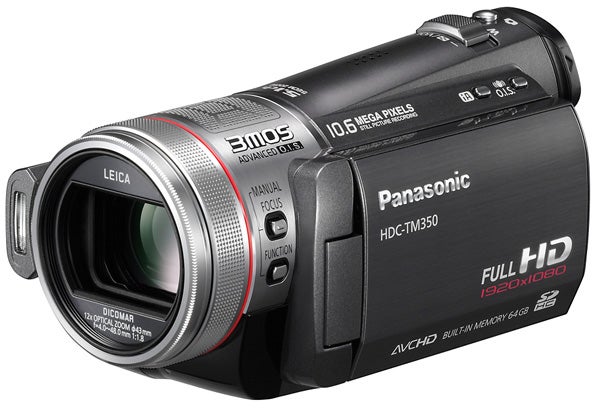 There’s not a lot to separate the top camcorders from Canon, Sony and Panasonic in terms of image quality, although the latter’s use of three CMOS sensors rather than one does differentiate it slightly. In good lighting, the TM350 produces extremely faithful colours and plenty of detail, but as always it’s low light performance which is the true differentiation. The TM350 maintains colour well as the illumination drops, although the image can be dark without Intelligent Auto mode’s invocation of the Low Light scene setting, or manual exposure adjustment. Using either of these methods, the TM350 provides one of the best low light performances we’ve seen from a consumer camcorder, although improvements over the TM300 are minor.


So the Panasonic HDC-TM350 takes an already winning formula and makes it even better. Sadly, Panasonic only plans to sell a few hundred TM350s in the UK, after which the model will be discontinued, and you can only buy them in Panasonic stores. If you can get your hands on one, and are looking for the best ‘prosumer’ camcorder currently on the market, we suggest you buy the TM350. But the improvements over the TM300 are not so great that you should feel aggrieved if you have to settle for the latter instead.