When we reviewed the Panasonic HDC-HS300 back in February, it already showed potential as a hot contender for 2009, perhaps even the year’s best camcorder. But we had to reserve our judgement slightly until we’d seen the new models from Panasonic’s competition, in particular Canon’s LEGRIA HF S10 and Sony’s HDR-XR520. Now we look at the HS300’s sister product, the HDC-TM300, with the benefit of having put the alternatives thoroughly through their paces. So which one should you choose?


The TM300 has essentially the same optics and sensor as the HS300. There’s a Leica Dicomar lens and a trio of 1/4.1in CMOS sensors, each with a gross 3.05-megapixels. So far, so similar. However, there are a few important differences. Previously, Panasonic has offered two options with its camcorders – SD models which use SDHC flash memory cards, and HS models with hard disks as well. The new TM models have flash memory built in. With the TM300, this is 32GB. So that’s quite a bit less than the 120GB hard disk in the HS300, but still enough for over four hours of footage even at the top quality setting, which records 1,920 x 1,080 Full HD at 17Mbits/sec. There’s also an SDHC card slot available if you need a little more. 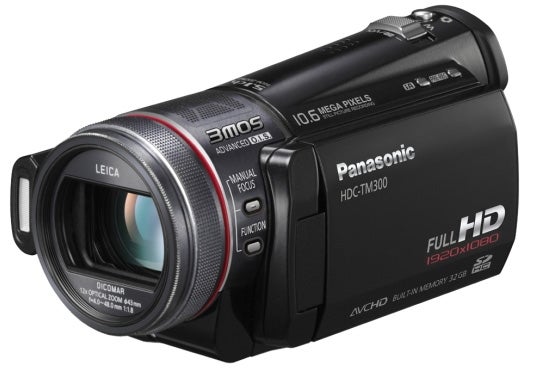 Thanks to the lack of an internal hard disk, the TM300 is 85g lighter than the HS300 and Panasonic has been able to redesign the chassis slightly too. The base dimensions are almost identical, but the handgrip side has a smoother, rounder contour which is a little easier to hold. The wheel for switching the camcorder on into video, camera or playback mode has been moved to the side, and can now be operated one-handed with your thumb. But more significantly, the zoom-telephoto rocker is now on the top of the main body, allowing it to be a much more sensible size. 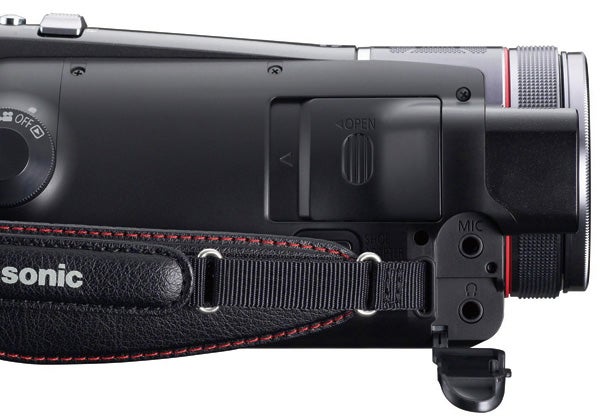 Presumably because of the relocation of this rocker, there is no accessory shoe on top of the body. Fortunately, Panasonic still sees this as an important option and hasn’t left it off entirely. Sliding a door on the side reveals a bracket, into which can be slotted an adapter that comes included in the box. This provides a standard accessory shoe. The door then slides back to neaten things up. Given the slightly annoying flap covering the accessory shoe on the HS300, we actually like this aspect of the TM300 better. On the one hand, you will have to remember this adapter or leave it attached, if you want to use it on a shoot. But if you don’t, you can leave it behind and have a sleeker camcorder. Either way, minijacks are ready for headphone and external microphone near the accessory shoe location.

Other than the differences already mentioned, the TM300 is pretty much the same camcorder as the HS300. The use of flash memory means power consumption is 10 per cent less, so batteries will last a proportional amount longer. But the features which made the HS300 such an excellent camcorder remain. Chief amongst these is the lens ring, something so few HD camcorders offer. In auto mode, this provides another way of controlling zoom. But simply press the manual focus button and it switches to controlling this feature instead. 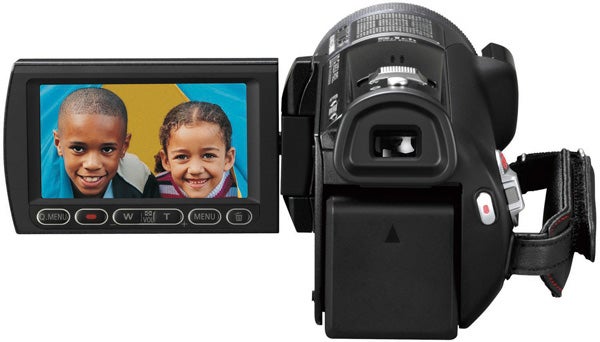 There’s an assist function to make things even easier. This magnifies a central rectangle of the frame so you can see more clearly whether your focus is sharp. Although we like the focus knobs on Canon’s HF S10 and Sony’s HDR-XR520, Panasonic’s lens ring is better still. It allows you to perform ‘rack focus’, also known as focus pulling, where you change focus to guide viewer attention. The Canon and Sony knobs are too slow to execute this popular piece of camerawork.


There are discrete buttons for toggling Intelligent Auto (iA) mode and PRE-REC. The former switches on Panasonic’s automatic system which detects conditions and switched on functions such as Portrait and Low Light accordingly. The PRE-REC system spools footage until you hit record, tacking it on the front so you don’t miss a shot. There are also buttons for disabling the optical image stabiliser and manual mode, but after pressing the latter everything else is operated via the touchscreen. 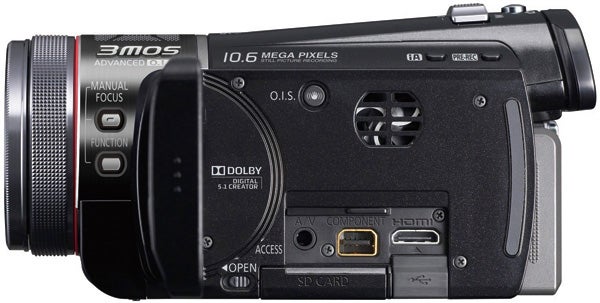 As usual for a Panasonic camcorder, manual settings are comprehensive. You can configure shutter and iris independently, and once the aperture is fully open you can add up to 18dB of video gain. There’s even an onscreen histogram. However, these settings are harder to configure with the touchscreen than they were with the multi-function lens ring provided by the HDC-HS100 and SD100. The touchscreen also enables an AFAE option when in auto mode. This lets you specify a reference point for focus and exposure by simply touching within the frame. If this is a moving object the camcorder will track it across the frame, including human subjects picked up by the face detection system.


The only real missing feature with the TM300, as with the HS300, is that there is no specific progressive mode. The Digital Cinema option shoots x.v.Colour and progressive, but this also disables some of the features, in particular the AFAE function, so won’t please the semi-pros. We wish Panasonic would follow Canon’s leave and offer a true, separate progressive mode, because more and more TVs support this now and it’s clearly the way computers display video.

Since the optics and sensor are the same on the TM300 as the HS300, video performance should be identical. Unsurprisingly we couldn’t see any differences, which is no bad thing as the HS300 shoots excellent video. The Panasonic shoots a slightly more naturally coloured video in good lighting than the Canon and Sony competition (although Canon provides settings to dial this back if desired). Detail is excellent, too. 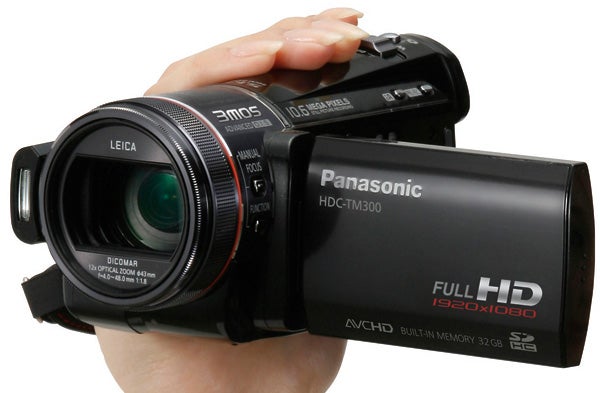 Low light performance is noticeably better than the last few Panasonic HD camcorder generations. Colour and brightness are maintained to impressively low levels of illumination, without much sign of grain, so there’s still plenty of detail, too. In comparison, Sony’s HDR-XR520 has a slightly darker, but still very impressive image in the same lighting. Canon’s LEGRIA HF S10 shoots slightly brighter footage, but with a little more grain. It’s a matter of taste, but we still slightly prefer the Canon’s performance in very low light. There’s not much in it, and Panasonic’s lens ring, full-sized accessory shoe and lower price provide more than enough compensation.


The Panasonic HDC-HS300 looked like a hard act to beat when we reviewed it, but the TM300 is an even more attractive package. The smaller video storage is balanced out by the reduced weight, and it’s around £50 cheaper too. Although Canon’s LEGRIA HF S10 and Sony HDR-XR520 are brilliant camcorders too, the former is considerably more expensive and the latter doesn’t offer the TM300’s manual control. If you’re serious about your video making, the HDC-TM300 gets the balance just right between features, video quality and price.