Panasonic’s top-of-the-range HD camcorders, such as the HDC-HS300 and HDC-HS200 are our current favourites at the premium end of the market. But the company’s lower-end HD models, such as the HDC-SD20 and HDC-HS20 haven’t convinced us quite so strongly. Now we have the HDC-TM10, which (despite the model name) is actually a newer model than the SD20 and HS20 generation.


Whereas the HDC-HS20 and SD20 looked like smaller versions of Panasonic’s higher-end camcorders, the TM10 uses a rather different design relying mostly on silver rather than black plastic, which some might find less stylish than the previous generation. However, most of the baseline features are the same. The sensor is an identical 1/6in CMOS with 1.47-megapixels, and the lens a Leica Dicomar with 2.95-47.2mm focal length and 16x optical zoom. However, the filter diameter has been reduced from 43mm to 30.5mm, as the camcorder is quite a bit smaller, weighing 278g rather than 321g. 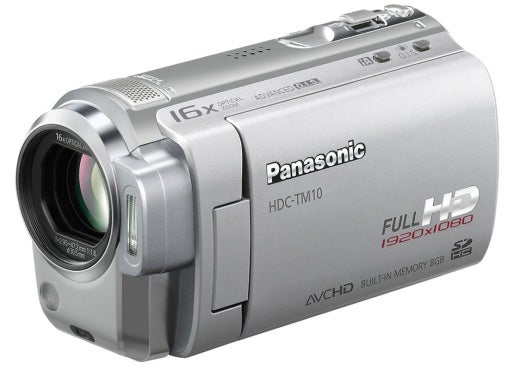 The microphone has reverted to stereo, rather than the 5.1-channel surround array found on the SD20 and HS20. On the plus side, the Advanced Optical Image Stabiliser now has an Active Mode, which we first encountered with the HDC-TM350. This smoothes out camera motion even more effectively than the basic setting, and is intended for when you’re using the camera when walking or otherwise in transit. We found Active Mode generally competent, although it does appear to cause a slight reduction in image quality, which is presumably why Panasonic has kept the original setting available.


Being a TM model, the TM10 comes with flash memory on board. In this case, you get 8GB, which is enough for an hour of footage at the top quality mode, but you can use the SD card slot to add more. Panasonic is still offering 17Mbits/sec as its top data rate, rather than the 24Mbits/sec Canon and JVC now provide for their latest models. The top three quality settings record Full HD at 1,920 x 1,080, but the bottom HE mode uses 1,440 x 1,080, as with HDV, and allows you to fit three hours of footage within the supplied memory. You can also take still images at 2.1-megapixels, which equates to the standard HD resolution of 1,920 x 1,080.

The TM10 is primarily aimed at the point-and-shoot user, and its size precludes the features that make its higher-end siblings such tantalising propositions. Therefore, there’s no lens ring, no accessory shoe, and no minijacks for an external microphone or headphones. Only a smattering of buttons offer discrete functions, including ones for cycling through the OIS modes and toggling Intelligent Auto and the PRE-REC video buffering system. This constantly spools footage to memory, which is tacked onto the beginning of a recording, so if you hit the button too late you won’t miss an important event. 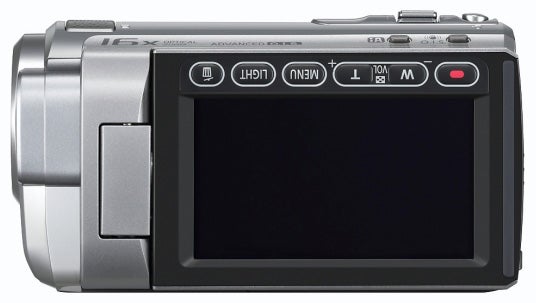 Everything else requires a trip to the touch-sensitive LCD, which contains Panasonic’s usual comprehensive range of manual configuration options. In auto mode, the AFAE system is available for a little more control. Simply touch a spot in the frame to indicate a reference point for focus and exposure. The AFAE reference can even be linked to the TM10’s face detection system, allowing focus and exposure to track a moving human subject. We’ve found this works reasonably well, with only a small amount of lag. You can also access backlight compensation and tele macro mode via the touch screen. 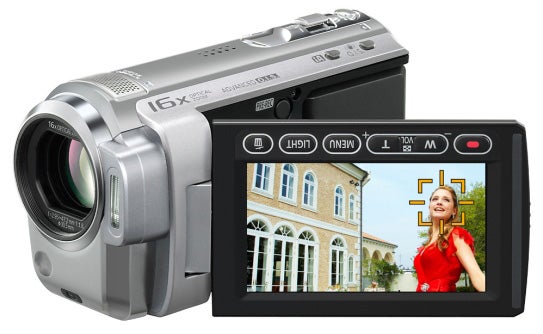 Further assistance for point-and-shoot users is provided by the Intelligent Auto system. This attempts to detect conditions and set scene modes accordingly, such as Low Light mode when illumination drops, and Portrait mode when human faces are detected. In good lighting, the Intelligent Contrast system is invoked to bring out details in shadows and highlights. The Shooting Guide also pops up messages when you perform potentially jarring camera moves such as panning too quickly.


Switch to manual mode and yet more options appear. You can adjust shutter and iris independently, and add up to 18dB of gain on top of a fully open aperture. Manual focusing operates via the touch-screen too, so is rather fiddly to use, although there is an Assist function. This magnifies a central rectangle within the frame for fine-tuning. White balance options include two indoor and two outdoor presets, plus fully manual configuration. You can also enable soft skin mode and colour night view with the camcorder set to manual.

Strangely, Panasonic hides its scene modes within the full menu, so you’re less likely to use them than the TM10’s other settings. The nine options include the usual portrait, sports, beach and snow. Manual audio level control is available, too, despite the inability to attach an external microphone. There are also Digital Cinema and Digital Cinema Colour options. The former provides a more cinematic colour gamut along with progressive shooting, whilst the latter enables x.v.Colour, which will only be visible when the video is viewed on a compatible TV. We’re also pleased to see that there are controls for toggling record and zooming located on the LCD – a virtual necessity with tiny camcorders such as the TM10, which can be uncomfortable to use Handycam style. 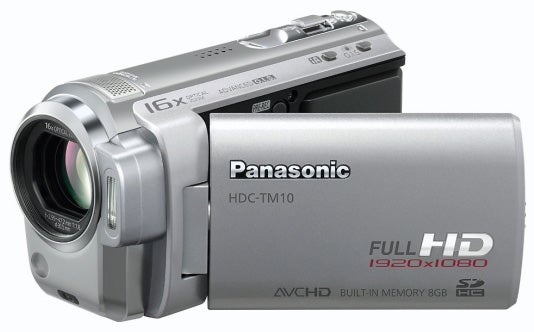 As the basic optics and sensor features are identical to the SD20 and HS20, the TM10 provides very similar image quality. In good light, colour is faithful but a little dark, particularly in areas of blue. There is plenty of detail, with little sign of noise, although the image is not as sharp as top-end models such as Panasonic’s own HDC-HS300. In low light, the TM10 manages to better the SD20 and HS20, but not by much, and it is marginally behind JVC’s Everio GZ-HD300. Fortunately, an LED video light is built in, which manages to improve the picture at short ranges.


Whilst Panasonic’s HDC-HS20 and SD20 are good, they didn’t quite have the right combination of features, image quality and value when we first reviewed them. The TM10, however, offers virtually the same abilities in a smaller package for considerably less. Low light performance may not be great, but overall image quality is good for the price, only marginally behind JVC’s great-value but slightly more expensive Everio GZ-HD300. If you’re after a pocket HD camcorder with a little bit more than just point-and-shoot, the HDC-TM10’s more readily accessible manual controls, decent picture and keen price make it worth considering.