The first high-definition camcorders to reach the consumer used the tape-based HDV format, which records on the same tape form factor as DV. However, although HDV uses MPEG-2 compression, it still requires quite a high data rate, so HDV hasn’t made the transition to hard disk and DVD-based camcorders – with the notable exception of JVC’s Everio GZ-HD7E. Instead, a new MPEG-4-based compression format was developed by Sony and Panasonic called AVCHD. 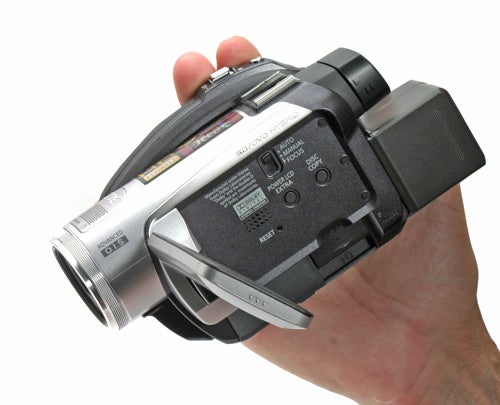 Sony was the first to release AVCHD products, but now Panasonic is rapidly catching up. Latest to join its line-up is the HDC-SX5. However, Panasonic has gone one better and created what it calls a Hybrid camcorder. This refers to the fact the SX5 has two video recording options. You can either record to 8cm DVD disc, or plug in a stick of SDHC memory and capture your video to that. With the latter now up to 8GB for well under £100, where a single-layer 8cm DVD only offers 2.8GB, it’s starting to look like the preferable choice. 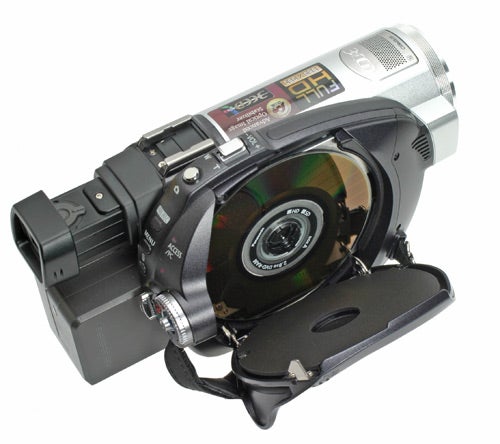 Both Canon and Sony have embraced CMOS technology with open arms in their camcorder ranges, but Panasonic is still resolutely sticking with CCDs. And as the pioneer of bringing three-CCD setups to the mainstream, Panasonic has unsurprisingly opted for this configuration in its HDC-SX5. In this case, the camcorder sports a trio of relatively small 1/6in sensors, each with 560Kpixels. Despite the effective pixel count of 520,000 per CCD, Panasonic has managed to squeeze Full HD out of the HDC-SX5. Its previous AVCHD models only offered recording at 1,440 x 1,080, but this new one is capable of up to 1,920 x 1,080. 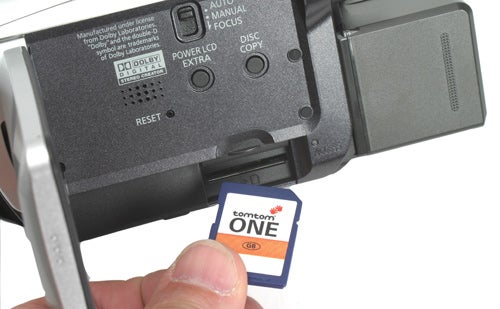 However, in this mode (called HG) you can only fit 14 minutes of video onto a 2.8GB single-layer 8cm DVD. This rises to 26 minutes on a dual-layer version, but it’s still not a lot when you’re used to tapes holding a whole hour. There are two 1,440 x 1,080 modes available, with 60 minutes of recording possible on a dual-layer disc in the lowest HE mode. You can also switch to Standard Definition. But this uses MPEG-2 rather than MPEG-4, so you actually only get about twice as much video in the same space as with AVCHD, and you can only record this to disc. In contrast, an 8GB SDHC card has enough room for 1 hour 20 minutes of HG-quality AVCHD. Discs may be convenient, but SDHC provides a much more realistic level of storage for High Definition.

Other than its recording medium, the HDC-SX5 is a relatively ordinary camcorder. Discs load from the top and SDHC from the side, so you could easily use it on a tripod. There’s a standard-sized accessory hot shoe, too, but since no microphone input is provided you’ll still have to opt for proprietary add-ons. Strangely, you can adjust audio levels manually – despite the complete absence of a headphone output as well. The HDMI connection is also curiously located underneath the battery, so you can only use this when the camcorder is on external power. Otherwise, an RCA-based AV connection is available for composite video output, and a proprietary connection for analogue component. 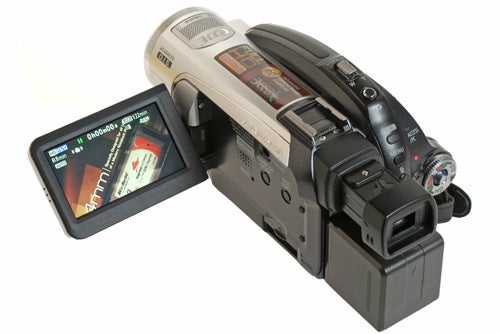 No lens ring is available, and unlike Canon’s HV20, there isn’t a separate alternative method for manual focusing. Instead, you must switch the camera to manual focus mode and use the joystick, although you can turn on Focus Assist to help. The joystick is also the home of the five Scene modes – Sports, Portrait, Low Light, Spotlight, and Surf & Snow. The shutter can be varied from 1/25 to 1/8000 sec and the iris from F2 to F16. You can also add up to 18dB of video gain to the fully open aperture. White balance can be controlled with the joystick, too. 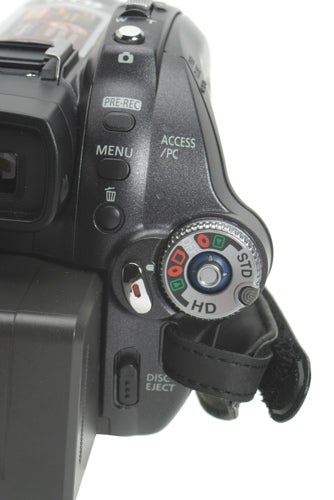 In automatic mode, the joystick still has its functions. You can turn on Colour Night View, backlight compensation, soft skin mode, tele macro, the intelligent contrast function and fades between clips. Intelligent contrast brings out the details in shadows and highlights, and we found it performed its task reasonably well. The HDC-SX5 also uses optical image stabilisation rather than the inferior electronic variety that sacrifices image resolution. This proved incredibly effective and is one of the best implementations we’ve seen in a consumer camcorder. Another potentially handy function is PRE-REC, which spools three seconds of video into a buffer, so when you hit record the video file will actually include the three seconds before you pressed the button. However, you can only use this when recording to SDHC.

With a trio of CCDs, you would expect the HDC-SX5 to provide really stunning image quality. After all, Panasonic’s three-chip DV camcorders are well-known for punching well above their price level in this respect. However, whilst colour fidelity is excellent in sunny conditions and very respectable under good artificial illumination, the small size of the Panasonic’s CCDs does show itself in low light. A lot of noise appears and the colours become very dark – noticeably below Canon’s HV20. 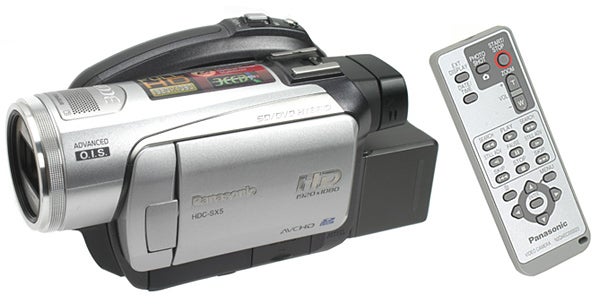 Not all of this is Panasonic’s fault, though. The AVCHD format uses considerably more compression than HDV to achieve its lower data rate. Although its MPEG-4 codec is more efficient than HDV’s MPEG-2, the compression has been pushed far enough to accentuate the effects of noise, and sometimes even introduces other artefacts such as ghosting on moving objects. However, one of the biggest drawbacks of the format has been alleviated in the last few months with quite a few video editing apps now supporting it natively, including Ulead Video Studio 11 Plus and Pinnacle Studio 11.


The HDC-SX5 has plenty of commendable qualities. The lack of microphone input and headphone output reduce its usefulness for more serious video making, but it offers good image quality in adequate lighting, and there are some useful manual controls on offer. Most of all, though, we’re not entirely convinced by the Hybrid recording format, in particular because we’ve never been bowled over by DVD camcorders. Discs may be very easily transferred to a PC by sticking them in your optical drive, but the low level of storage available means you would have to pack quite a few for a long holiday. We’re much more in favour of the HDC-SX5’s SDHC capabilities. Fortunately, Panasonic has alternative models recording to this format alone, which we plan to review in the near future.