Like every other area of technology, video is developing at an increasing pace. Digital camcorders arrived around 15 years ago, high definition only five years ago, and now video is acquiring a third dimension as well. Our first taste of consumer 3D videography came from an unexpected direction in the shape of the Aiptek 3D i2. But now we have a higher-end, more mainstream option from Panasonic: the HDC-SDT750.

The clever bit with the SDT750 is a bolt-on attachment for the lens. This contains a pair of lenses oriented in parallel, which pick up two slightly different points of view, one for each eye. The camcorder senses when this has been screwed on for the first time, and prompts you to follow a calibration wizard. The lens cap contains an adjustment pattern on a translucent plastic panel. Three dials under a flap on the top are used for precise positioning, to optimise the 3D image. Unfortunately, it’s recommended that you re-calibrate each time you remove and re-attach the lens, which is somewhat irritating. 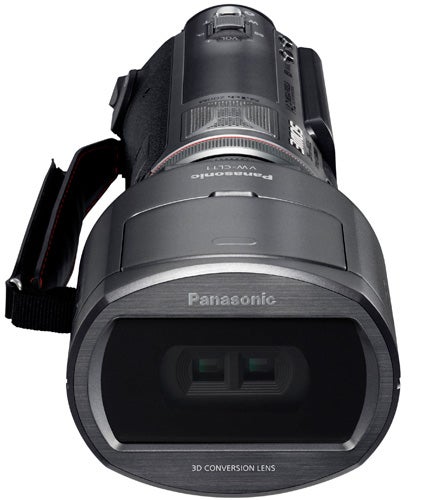 The dual images are recorded side-by-side into a single frame of AVCHD. This is one of the standard formats for 3D, and the main one currently supported by 3D-capable HDTVs. However, you lose half the horizontal resolution, as the video is still recorded at 1,920 x 1080 pixels, so you’re effectively getting 960 x 1,080. The splitting of the frame will also have implications for low light performance. 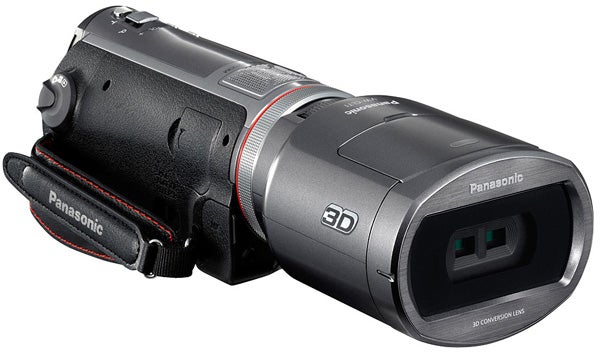 Using the SDT750 requires a different approach to videomaking than regular 2D shooting. Adding the 3D lens disables quite a few features. Most significantly, you can’t operate the zoom, but there’s also no manual focusing available, and no control over shutter or aperture. You can engage the extra level of image stabilisation available with the Hybrid OIS system. But it’s not even possible to enable scene modes or the 1080/50p recording format.

Apart from the 3D attachment, however, the SDT750 has almost the same features as the HDC-TM700, except for one thing: no integrated storage. So instead of on-board flash memory, the SDT750 relies on removable SDHC cards. This is particularly surprising considering the price of this camcorder. 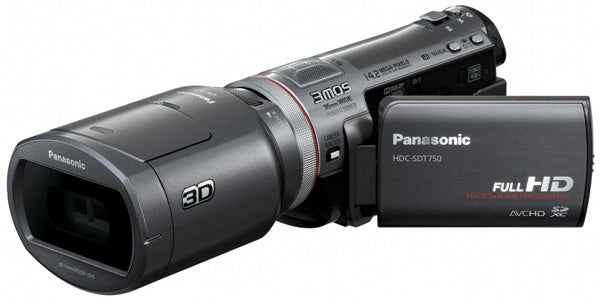 
However, onboard memory is the only omission. Other than this, the SDT750 has the same comprehensive range of enthusiast features as the TM700, with the lens ring topping the list. In automatic mode, this simply offers another control for the zoom. But enable manual mode, press the camera function button on the side, and the ring switches to operating focus. Press the function button again, and you can cycle through white balance, shutter, and iris, then use the lens ring to adjust each setting. It’s the most user-friendly manual control system available on any consumer camcorder currently on the market.

In automatic mode, you still have some control on tap via AFAE, where a single press of the touchscreen LCD indicates a reference point for focus and exposure. So, when shooting 2D video, the SDT750 has every function an enthusiast might want.


The SDT750 has the full complement of semi-pro physical features, too. There are minijacks on the side for hooking up an external microphone and headphones. Without this, audio is recorded in 5.1 surround using the cross-shaped array on the top, which also enables quite effective zoom microphone and peripheral noise cancellation abilities. There’s no accessory shoe built into the camcorder body itself, but as with other recent high-end Panasonics, a flap on the side hides a slot for attaching a bracket housing a standard shoe. So regular third-party peripheral devices can be added.

It’s the 3D video, however, that matters most, and despite the limitations of shooting in this mode, here the SDT750 delivers commendably. The 3D has depth and clarity, although of course, the quality of the 3D is also affected by the system you use to watch it. We were viewing footage on a Panasonic TX-P50VT20B, but the SDT750 can output video over HDMI to any TV supporting the side-by-side 3D format. It’s also theoretically possible to upload 3D footage to YouTube, although the latter doesn’t automatically recognise the side-by-side AVCHD files created by the SDT750. So in practice this won’t be straightforward.

As we predicted, in 3D mode the SDT750 does not perform as well in low light as other high-end Panasonic HD camcorders. The image is darker, although colours are still quite faithful. But in 2D mode, the performance is exactly the same as the HDC-TM700, which makes it one of the best consumer-grade HD camcorders currently on the market. 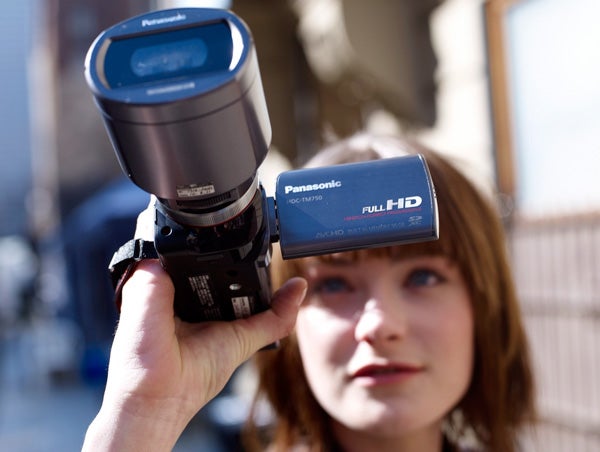 Whilst watching 3D footage directly on a 3D TV is easy, editing 3D footage will be more problematic. The supplied HD Writer AE 2.6T can interpret the 3D files and decode their side-by-side format so they appear as 2D onscreen. It can also trim the files and splice them together. However, regular video editing apps aren’t 3D aware, and even professional apps like Adobe Premiere Pro CS5 currently require third-party plugins. Annoyingly, HD Writer AE 2.6T doesn’t have the ability to upload footage to YouTube. Instead, your primary methods of watching the footage will be either directly from the camcorder, or by burning it to AVCHD on DVD or Blu-ray, using a 3D TV.


The Panasonic HDC-SDT750 is the first serious 3D camcorder for consumers, and it performs its job commendably. However, the current price is nearly twice that of a similarly specified 2D-only Panasonic HD camcorder, such as the HDC-TM700. So you’re paying a significant premium for the 3D lens and shooting abilities. If you’re a die-hard early adopter with deep pockets, this is a real semi-professional 3D camcorder. But the rest of us will have to wait for the prices to go down.