Over the last couple of years, Panasonic has retaken the high ground for enthusiast camcorders, and its recently released HDC-TM700 is our current semi-professional or enthusiast favourite. But not everyone wants the ultimate in manual control, instead preferring similar quality video automatically. Sony’s consumer camcorders primarily aim at this market these days, and Panasonic also offers models for more point-and-shoot usage, the latest of which is the HDC-SD600.

This model is built around the same sensors and optics as the TM700, so its foundations are good. These comprise a trio of 1/4in CMOS chips with 3.05-megapixels apiece, plus a Leica Dicomar lens offering a 35mm wide aspect. The latter allows you to pick up more of the contents of a small room, which is likely to be useful for a camcorder intended for general consumer usage.


However, the camcorder body is a little smaller than the TM700’s, mostly due to the absence of some key physical features. Chief amongst these is the excellent lens ring, which makes the TM700 so very easy to adjust manually. But the bracket for an accessory shoe attachment is also missing, as are minijacks for connecting an external microphone or headphones. The final omission is the cross lattice of microphones the TM700 has that enable it to record 5.1 surround sound. The SD600 only offers stereo microphones, although it does still provide the new wind cancellation setting introduced with the TM700, which we have found to be remarkably effective. 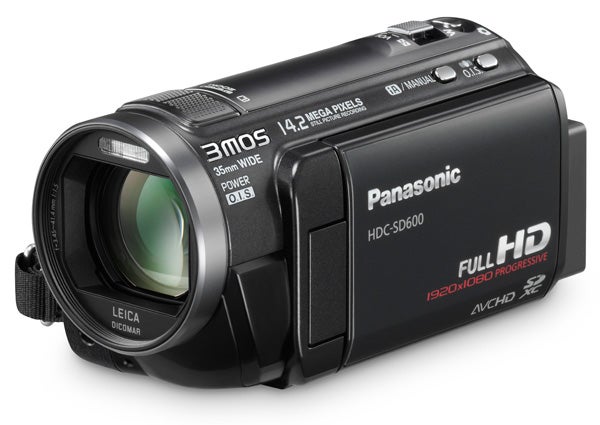 Despite these omissions, some of the top new features of the TM700 have been carried forward to the SD600. In particular, its highest quality setting is still Full HD at 50 frames/second, which is recorded at 28Mbits/sec. This mode has a special button to enable it, which also pops up a message implying that it won’t be so compatible with editing software or external devices. The highest quality setting at 25 frames/sec records 17Mbits/sec, but there are no standard definition options, unlike HD camcorders from some other manufacturers, such as Sony.


Since this model doesn’t contain any flash memory, it relies entirely on SD cards. The recently introduced SDXC format is also supported, which allows capacities above the 32GB limit of SDHC. A 16GB card is enough for around one hour and 20 minutes of 50p footage or two hours of regular 25 frames/second Full HD at the top quality setting.

The SD600 also includes the new Power OIS image stabilisation system found on the HDC-TM700, which can iron out vibrations down to a frequency of 5Hz. This is primarily aimed at smoothing handheld recording at maximum zoom, but we found it was also more effective than the standard OIS when recording video whilst walking.


The lens provides a 12x optical zoom as standard, but like many recent camcorders also harnesses the extra pixels on its sensors to boost this factor. Panasonic calls this i.Zoom, and it increases the telephoto to 18x without loss of resolution, unlike the 30x and 700x digital zooms that are also available. The i.Zoom does reduce sensitivity slightly in low light, as it uses a smaller portion of the CMOS sensors when at full telephoto than the standard optical zoom. But otherwise this is a useful extension of the SD600’s close-up capabilities. 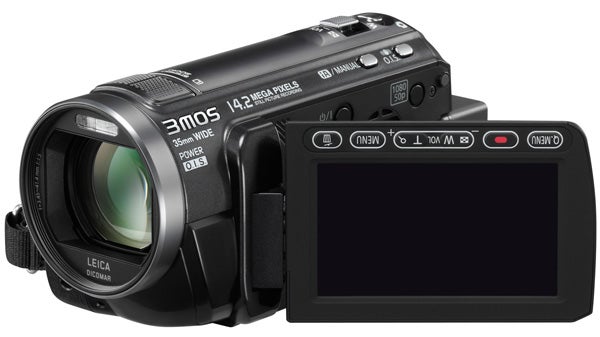 Despite the lack of a lens ring, the SD600 still packs a comprehensive selection of manual options, but all of them are accessible exclusively through the touchscreen LCD. There are three menus that overlap in capabilities, including a function strip, a quick menu, and a full menu. In Intelligent Auto mode, the strip offers access to useful everyday features such as AFAE mode, Pre-Rec buffering, backlight compensation and tele macro, plus smile shutter when taking digital photos. The AFAE option is Panasonic’s one-touch focus and exposure system, where you indicate a point in the frame to use as reference with a simple finger press. The point can then be tracked if it moves or the camera does.


Switch over to manual mode, and the function strip gains a few extra options. These include focus, white balance, shutter and iris. The manual focus uses onscreen buttons, so is a little fiddly to operate, but white balance options include four presets alongside manual and auto modes. Manual shutter ranges from 1/50th to 1/8,000th of a second, and iris from F16 to F1.5, with up to 18db of video gain available on top of a fully open aperture. Best of all, shutter and iris can be configured independently. Manual mode also enables a soft skin option and makes the colour night view low light mode available.


In Intelligent Auto mode, the Quick Menu lets you rapidly change recording format, set still image resolution, and shift autoexposure up or down a few notches. Switch to manual, and you gain the ability to toggle zebra, add AGC to the microphone levels, and turn on displays for histogram and brightness levels. Overall, it’s a very strong range of settings. They’re just more difficult to configure without the lens ring and associated mode switches.

Panasonic is now the only manufacturer left taking the three-chip approach with its consumer camcorders, and the SD600’s video performance shows that this is still a very valid strategy. Despite each 1/4in sensor being quite a bit smaller than those inside most high-end HD camcorders these days, having three of them means that the SD600 can compete with the best single-chipper in every condition. 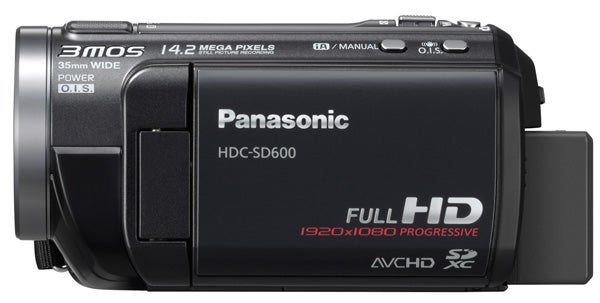 In bright, sunny environments, there is a good level of detail in both well-lit and shadowy areas. Colours are faithful and well saturated without becoming unrealistic. As illumination drops, the SD600 manages to maintain colour and avoid noise. The image is a little dark, but very sharp.


Without the comprehensive enthusiast features of the HDC-TM700, the Panasonic HDC-SD600 is not quite so easy to recommend unequivocally. However, it is significantly cheaper than the flagship model in compensation – as much as £200 cheaper from some vendors. For those who want dependable, top quality in the widest range of conditions but are unlikely to fiddle with manual settings regularly, the SD600 could be an economy worth making.