Panasonic currently has a strong position at the high end of the HD camcorder market, with recent models such as the HDC-TM700 offering an almost perfect blend of enthusiast features and image quality. But more budget-oriented models like the HDC-TM10 sacrificed a little too much to be similarly dominant in their respective price range. In particular, the choice of a 1/6in sensor meant low-light performance wasn’t quite on par with the likes of Sony’s Exmor-equipped HDR-CX105E or JVC’s Everio GZ-HD300.


So, for its 2010 entry-level HD range, Panasonic has upgraded the CMOS sensor to a 1/4.1in unit. This week we look at the HDC-SD60, which was released alongside the TM60 and HS60. All three models offer nearly identical features, the main difference between them being the recording medium used. The HS60 captures video to a 120GB hard disk, so is a little larger than the other two, which are identical in dimensions. Of these, the TM60 incorporates 16GB of flash memory, whilst the SD60 only offers a single SD card slot, so you have to supply your own storage. Other than these differences, the video features are the same. 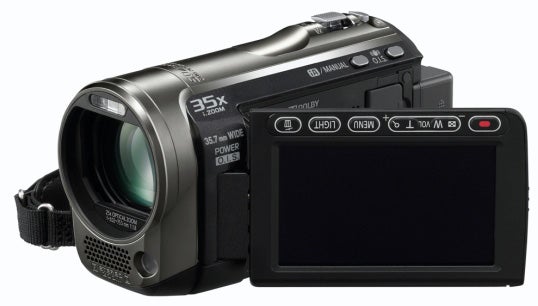 The larger sensor used in all three new models also has more than twice the resolution of Panasonic’s previous generation, with 3.3-megapixels instead of 1.47-megapixels. So there is now ample resolution for Full HD, and a healthy dollop of interpolation has been added to provide digital stills up to 5-megapixels. Video recording options remain the same as before, however. The 1080/50p mode introduced with the TM700 and SD600 is not present, and Panasonic still hasn’t added the top 24Mbits/sec data rate available for AVCHD, which both Canon and JVC already offer. So the highest-quality Full HD mode uses 17Mbits/sec, which means around an hour’s footage will fit on an 8GB SDHC card.


Despite the larger sensor, which would usually be accompanied by a reduction in zoom for basic optical reasons, the SD60 actually provides an increase in this area. The optical telephoto has been boosted to a very respectable 25x, and Panasonic takes advantage of the excess pixels on the CMOS sensor to provide an additional iZoom function, which isn’t accompanied by the usual loss in image quality associated with a regular digital zoom. This takes the factor to a whopping 35x, which we found very useful indeed for capturing footage of the aerial displays of the Red Arrows flying team, for example.

Further aiding handheld shooting at extreme zoom is the extra image stabilisation mode, which was first introduced in the HDC-TM350. The fact that the SD60 has an optical image stabilisation system is already very commendable at this price, and the new Advanced mode adds extra dimensions to the correction, making footage more stable whilst walking, or at high factors of telephoto, when shooting handheld. We found the new mode has clear benefits and is well worth having. 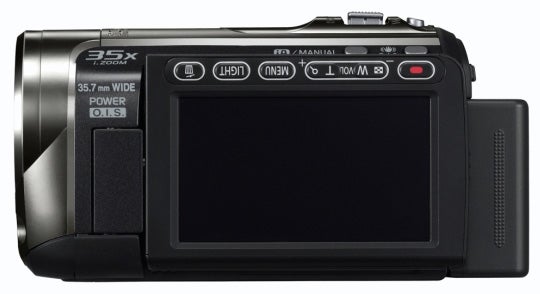 Not surprisingly, however, the SD60 has little in the way of enthusiast features. There’s no accessory shoe, and there are no minijacks for hooking up an external microphone or headphones, although manual audio level adjustment can be found in the menu system. The latter is almost exclusively operated via the touchscreen LCD. The only two discrete settings buttons available merely toggle between the two OIS modes and between Intelligent Auto (iA) and Manual. The LCD edge does have buttons for triggering record and operating the zoom, facilitating two-handed waist-height usage. There’s also a button for turning the built-in LED video light on and off. But all other settings require the touchscreen.

With iA enabled, it’s still possible to access a few useful features. A quick tap of the screen calls up the rapid function menu, with AFAE mode taking pride of place. This is a single-touch system for specifying a reference point for focus and exposure, which a number of manufacturer’s now offer. Clicking on the ‘F’ arrow button reveals the ability to turn on further functions, including the PRE-REC buffering option, smile shutter for when you’re taking photos, plus backlight compensation and tele-macro modes.


Switch to manual mode, however, and more functions are added to this strip. In particular, you gain the ability to adjust white balance, focus, shutter and iris. White balance options include two indoor and two outdoor presets, plus auto and fully manual modes. Manual focusing using the touchscreen buttons is a little fiddly, albeit aided by focus-assist fringing. You can adjust the shutter from 1/50th to 1/8000th, and aperture from F16 to F1.8, with up to 18dB of video gain on top. The latter two settings can be adjusted entirely independently, an impressive capability at this price if it wasn’t for the fact that all Panasonic camcorders can do it!

There are a few extra goodies available if you delve into the full menu. These include 10 scene modes, digital cinema colour, and the new wind canceller Panasonic has added with this year’s models, which we have found to be quite effective. Perhaps the most surprising new feature here, however, is the Picture Adjust section, which lets you manually configure sharpness, colour, brightness and white balance offset between red (warm) and blue (cold). This goes even further than the Image Effects now found in many Canon camcorders. 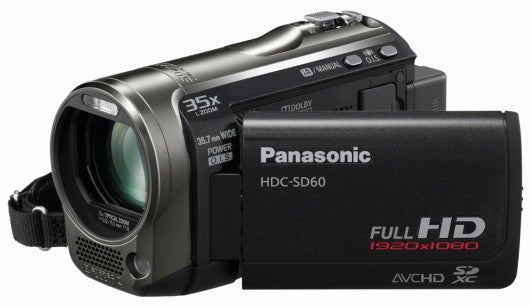 The healthy range of manual settings is mirrored by the SD60’s image quality. In good lighting, there’s almost no evidence of noise and the picture is very sharp – much sharper than the HDC-TM10, thanks to the extra pixel resolution of the sensor. Colours are also very faithful, although here the TM10 was about on par. Colours remain remarkably strong in low light.


Although focus accuracy is understandably not as good as in optimal illumination, there is a marked improvement here over previous models such as the TM10, and performance is now as good or better than any other model we’ve tested in the same price bracket. Crucially, where the TM10 produced an unacceptably dark image in important types of artificial lighting, the SD60 shoots usable video. So you’ll get great, or at least good results in most everyday conditions.


Panasonic appears to have finally cracked the lower end of the high definition market. The HDC-SD60 and its siblings don’t offer quite the gobsmacking value of Samsung’s HMX-R10, but the prices of these models are still extremely good, and their performance and features are far superior. If you’re after a small, versatile camcorder for holidays or family social gatherings with exceptional HD video quality, the HDC-SD60 should be top of your list.