High-end models make the most headlines in the camcorder market, but the majority of buyers are looking for something more affordable. Panasonic’s HDC-SD40 is the entry-level model in Panasonic’s 1MOS HD camcorder range, offering more features than pocket Internet devices, but fewer than its premium 3MOS units. Costing under £250, though, it’s also somewhere in-between in price. Its size is also the smallest in its class, weighing just 211g with battery and memory card.

The SD40 is based around a 1/5.8in CMOS with 1.5 megapixels, the same as Panasonic’s HDC-SD80. However, just 1.19Mpixels are employed when shooting video, where the SD80 uses 1.3 megapixels. This is considerably less than the native resolution of the 1,920 x 1,080 Full HD video format used for recording. So the SD40 won’t be able to offer the level of detail provided by its higher-end siblings, such as the HDC-SD90. Panasonic still also eschews the top 24Mbits/sec data rate available from the AVCHD format, offering 17Mbits/sec instead. The SD40 has no internal storage, relying on its single SDHC slot instead. At the top quality setting, about an hour of footage will fit on a 8GB card. The slot supports SDXC, so you can use cards up to 64GB in capacity.

Panasonic hasn’t economised so much when it comes to the SD40’s shooting features though. Image stabilisation is of the company’s optical Power OIS variety, which proved remarkably effective during testing, with no obvious drop in image quality. It’s not as effective as the Hybrid OIS provided with Panasonic’s current models above this one, but still very capable at this price. The optical zoom is a healthy 16.8x, too, although Panasonic’s more expensive HDC-SD80 offers an even more impressive 34x. Also, as the SD40 has no extra CMOS pixels available there’s no intelligent or dynamic zoom to boost the range, just 50x and 1200x digital zooms, the latter being patently ridiculous.

Face detection is on-hand in the Panasonic HDC-SD40, setting focus and exposure by using a human face within the frame as a reference point. This works in tandem with the Intelligent Auto (iA) system Panasonic has offered in its camcorders for a few years now. Essentially autoexposure on steroids, iA detects conditions and enables various scene modes, such as low light mode in poor illumination, or Portrait mode when nearby faces have been detected.

If you do want to control things more yourself, there are plenty of options too. However, the SD40 doesn’t have a touchscreen, unlike the SD80. All settings are configured using a D-pad, menu and enter buttons on the side of the LCD. This unfortunately means there is no second set of buttons on the LCD edge for operating record or zoom, making two-handed shooting from the waist less ergonomic. 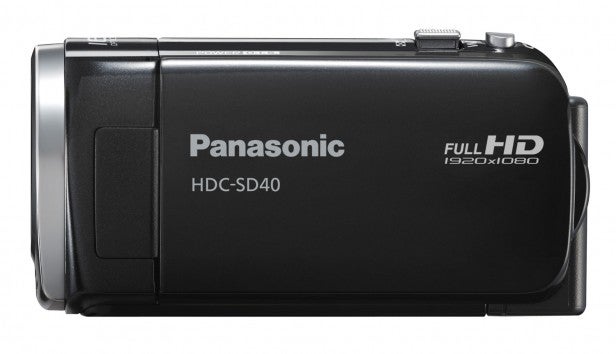 The menu button calls up the full settings menu, but the enter button is used to activate the shooting parameters, which vary in extent depending on whether you’re in manual or Intelligent Auto mode. With the latter enabled, your only useful options are backlight compensation, tele macro, and PRE-REC, which continuously buffers video and tacks a few seconds extra on the front of your shot from before you hit the record button. That way, if your reflexes are a little slow, you won’t miss the action.

As with virtually all Panasonic camcorders, bar its pocket Internet models, there’s a full range of options in manual mode. Manual focus is available, although it’s extremely hard to operate with the D-pad. White balance options include two presets each for indoor and outdoor conditions, as well as auto and manual modes. There are soft skin and intelligent contrast settings, the latter maximising detail in areas of shadow and brightness. There’s also a colour night view option, which drops the frame rate right down below 1/25th, sacrificing motion smoothness for visibility.

There’s a separate button for the built-in LED video light on the Panasonic HDC-SD40, but all other settings must be configured via the D-pad. Manual shutter and aperture control are available, the latter also including gain. Shutter settings range from 1/8000th to 1/50th, although the camcorder can drop to 1/25th automatically with auto slow shutter enabled. The iris can be set between F16 and F1.8, with up to 18dB video gain available on top of a fully open shutter. Despite the SD40’s budget orientation, shutter and iris can be configured separately – an unique feature at this price.

There’s a Zoom Mic and Wind Noise Cancellation, and it’s even possible to control microphone levels manually, although no minijacks for an external microphone or accessory shoe for attaching it are available. There’s no headphone jack either. Outputs include mini-HDMI and a proprietary AV Multi port which supplies both composite and component analog video alongside stereo RCA audio connections, all on one cable. Naturally, there’s a mini USB port for taking files off the camcorder. 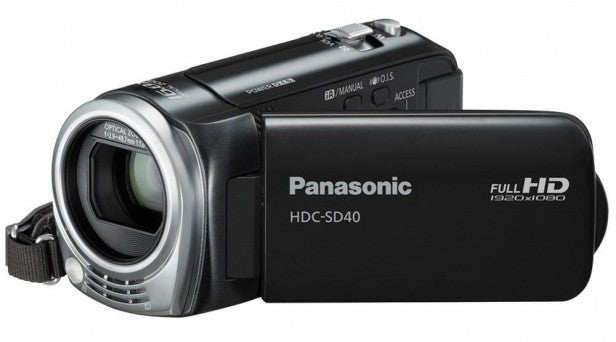 Photographic features aren’t tremendously extensive, with just a quality setting, self timer, and shutter sound available. Still images are grabbed at 2.1-megapixels, which most camera phones now exceed, although they won’t offer the SD40’s quality lens and optical zoom.

Sensor and image processing technology has clearly moved on over the last few years, because the SD40 squeezes very respectable performance out of its small CMOS, even in low light. Colour fidelity in good light is commendable, although if you look closely it is possible to detect the lack of detail compared to camcorders with Full-HD sensor resolutions, with some softening of edge sharpness. Low-light conditions produce a little more grain than higher-end models such as the HDC-SD90, but the image is surprisingly bright. Overall, the SD40 produces video performance to match or exceed other camcorders at this price.

It has been a few years now since the Flip and its ilk threw a spanner in the works for the budget end of the traditional camcorder market. Pure point-and-shoot users will still find this class of camcorder, such as Panasonic’s own HM-TA20 offers the most for their money. But if you do want a little more control and an optical zoom, Panasonic’s HDC-SD40 makes a decent choice. JVC’s Everio GZ-HM445 gives a little more for the money overall, but with its independent control over shutter and aperture the SD40 offers the most shooting flexibility at this price.