Panasonic has been resolutely sticking with CCD technology for its camcorders, where even JVC has switched over to CMOS sensors for its latest GZ-HD10 and GZ-HD40. Now, with the HDC-SD100, even this last bastion is making the switch. But instead of moving from its former three-CCD to a single larger CMOS like the rest, Panasonic has opted for three-CMOS instead, which it is calling 3MOS. 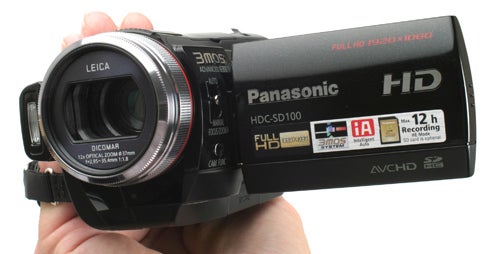 The trio of CMOSes in the HDC-SD100’s 3MOS system are 1/6in in size, so as small as the CCDs in previous models such as the HDC-SD9. These also only offer 610,000 pixels each, so you’re not getting the full resolution of HD for each colour channel as you do with professional three-chip camcorders. But Panasonic has augmented the 3MOS with a new HD Crystal Engine image processor, to make the most out of the new sensor array. 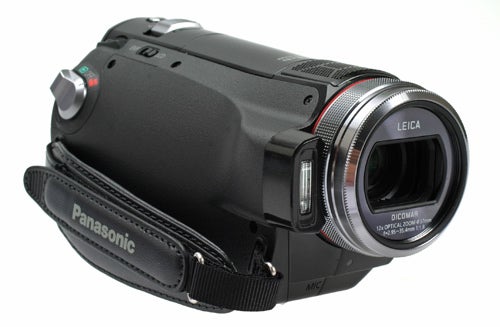 The SD100 records to SDHC memory only, although there will also be a larger, but similarly featured HS100 model that will incorporate a hard disk. The SD100 offers four recording mode options, somewhat cryptically called HA, HG, HX and HE. The HA mode is the top option, but the top three record Full HD at 1,920 x 1,080. Only the most economical HE mode drops down to 1,440 x 1,080. Data rates range from a healthy 17Mbits/sec for HA to a miserly 6Mbits/sec for HE – but you will notice the extra compression. An 8GB SDHC card will store an hour of footage in HA mode, or three hours of HE. 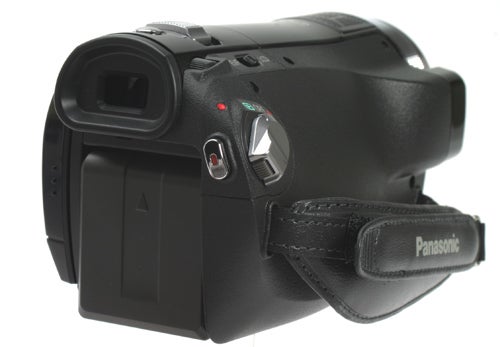 Even though Canon’s HF10 and HF100 finally put AVCHD on the map as an alternative to HDV for serious videomaking, the HDC-SD100 has a few features not even these Canon models offer. In particular, this is the first AVCHD camcorder we’ve yet seen with a viewfinder as well as the usual LCD panel. It also offers a lens ring – a feature almost as rare.

The viewfinder is fixed and won’t be easy to use with a long-life battery attached, nor does it have a rubber surround for comfortable use. But at least it’s there. Annoyingly, Panasonic has moved its joystick from the rear to under the LCD, which is nowhere near as convenient. However, you won’t need it as much as with previous Panasonic camcorders. A switch near the lens toggles between auto and manual focusing, with a second push redirecting the ring to zoom operation instead. 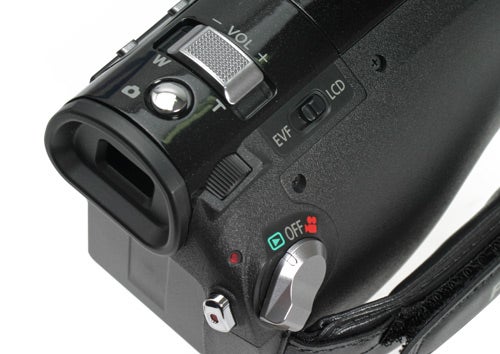 The ring’s functions don’t end there, though. Press the CAM FUNC button, and a small menu appears offering White Balance, Shutter Speed and Iris. The lens ring is then used to scroll through the options, and the CAM FUNC button to make a selection. Then the lens ring adjusts your chosen settings. You can configure shutter from 1/50th to 1/8000th, and the iris from F16 to F1.8, with up to 18dB of gain on top. These can be set independently. Overall, it’s very intuitive and easy to use, making this the friendliest manual control system on any AVCHD camcorder we’ve yet seen. 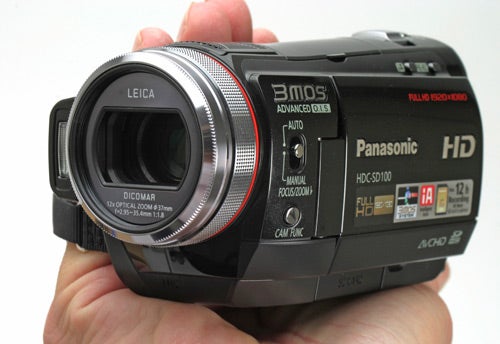 With a lens ring and viewfinder, it will come as no surprise the HDC-SD100 also has a standard-sized accessory shoe, microphone input and headphone jack. Since you must have the LCD open to use the joystick, there’s a switch on the side to turn it off and enable the viewfinder instead. The latter also doubles as AV output, which must be switched in the menu.

Further discrete buttons toggle the Optical Image Stabilisation and the PRE-REC function. This keeps a few seconds of video buffered, so if you hit record too late you won’t miss the moment. The final button controls the iA Intelligent Auto mode. This adds functions to the Scene modes, such as augmenting Portrait mode with face recognition, or switching on Intelligent Contrast and Low Light mode when necessary. 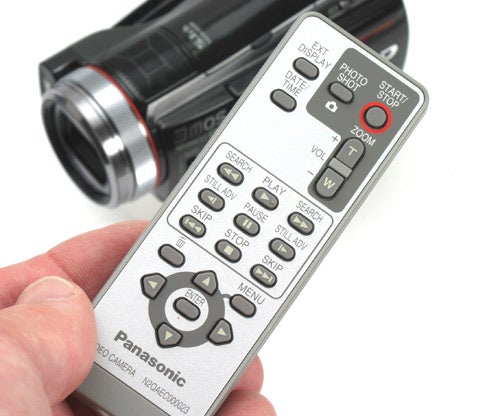 The remaining controls are only available via the joystick and full menu. You can turn on backlight compensation or soft skin mode via the joystick. One highlight in the menu is the Digital Cinema Mode, which is Panasonic’s version of x.v.Color, but also bundles 25p shooting. We would have preferred to see these as separate options, as the colour alteration may not be to everyone’s taste. 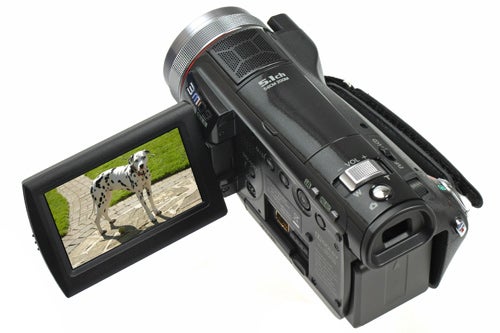 As with Panasonic’s HDC-SD9 and HS9, the SD100 incorporates a quintet of microphones arranged in a cross. These are used to produce the directional signals for a 5.1 surround sound signal, but they also enhance the Zoom Mic function, as well as providing a Focus Mic feature. This attempts to reduce the level of sounds not coming from within the visible video frame.

In the best lighting, the HDC-SD100 produces incredibly vibrant colour. Point-and-shoot users will be very pleased with the results. But the more professional end of the market will be after a more naturalistic look, and we would like to have seen controls for toning down saturation a bit, as found with Canon’s HF10 and HF100. Performance is still excellent, though, and footage is noticeably sharper than the HDC-SD9. But it still can’t quite reach the benchmark set by the Canons – one large CMOS clearly has the edge over three smaller ones. 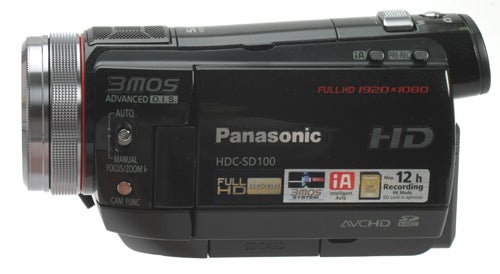 The oversaturation does have its benefits. In moderately low light, there is still plenty of colour, more than with the SD9. The level of grain is also lower, and finer, so greater detail is visible. Again, though, the Canon HF10 and HF100 retain more colour and produce a sharper image, albeit with a similar level of grain. Unfortunately, in lower light the Canons increase their lead. The SD100 maintains some colour definition, but the overall image is too dark and marred by grain. 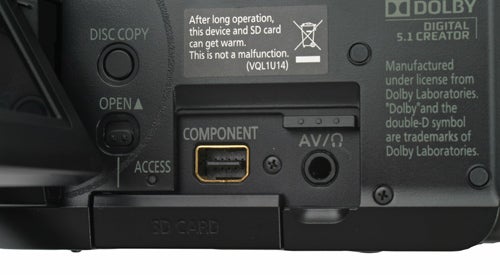 Since it records AVCHD, the Panasonic can now enjoy a wide compatibility for its footage. Even Adobe has recently announced a new version of Premiere Elements with support. As with virtually all non-tape-based consumer camcorders these days, USB 2.0 is the primary means of PC connectivity – if you can find the port. Panasonic has buried it underneath the battery, forcing you to use mains power when copying footage to a computer. The HDMI port is also hidden here, and it’s of the mini variety so will need an adapter for hooking up to a HDTV. 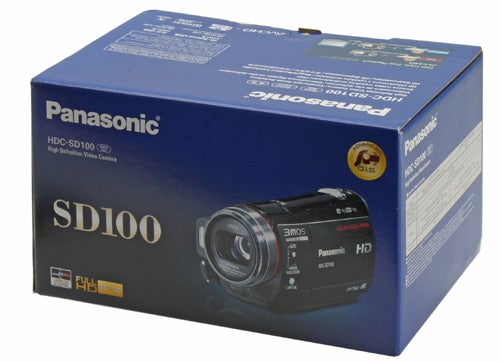 But at least Panasonic’s AC power brick allows you to charge batteries on their own. Under the LCD, alongside the aforementioned dual-purpose AV and microphone minijack, a proprietary port is available for component analogue. So, despite its small size, the SD100 still manages to incorporate a full complement of connectivity options, without the need for a docking station. 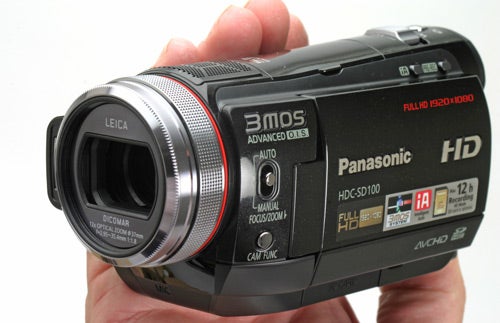 
In previous camcorder eras, Panasonic has excelled at providing models with comprehensive features for the enthusiast. Its NV-GS400 was the last great ‘prosumer’ DV model. Until the HDC-SD100 arrived, no manufacturer had combined AVCHD with quite that level of professional features. Canon’s HF10 and HF100 are close, but the HDC-SD100 goes a few steps further with its standard accessory shoe, viewfinder and lens ring. Most amazingly, Panasonic has managed to fit all this into a tiny camcorder weighing just 382g. It’s not perfect – the Canon’s beat it for overall image quality, and at close to £700 it’s not cheap. But if you’ve been holding out for an AVCHD camcorder with the full gamut of professional features, this could be your dream come true at last.