Panasonic’s dinky HDC-SD9 may have grabbed the lion’s share of our attention, but it was released in tandem with another new model. The HDC-HS9 doesn’t have quite the same miniaturised appeal, being about 10mm wider and noticeably heavier. However, it does pack the same features which have helped make the HDC-SD9 the most exciting camcorder we’ve seen so far this year. It also has a built-in hard disk, so you don’t need to invest in a large SDHC card to store a respectable amount of video. 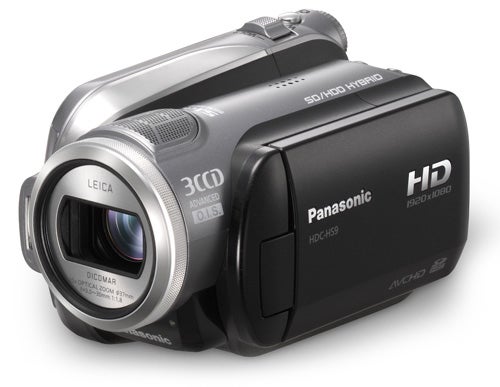 The HDC-HS9 uses a trio of 1/6in CCDs, each with a gross 560,000 pixels. These are small, but at least with three of them they provide a discrete signal for each colour channel. The CCDs are aggregated for digital photography, allowing 2.1-megapixel stills at 1,920 x 1,080 – not exactly print resolution, but enough for email and web usage. Image stabilisation is Panasonic’s Advanced Optical variety, which is much more effective than the digital equivalent. In particular, no loss of resolution is involved with optical anti-shake technology.

The HS9 records video in the AVCHD format, which uses the more efficient MPEG-4 AVC H.264 compression system rather than the MPEG-2 of HDV. Four quality modes are available. The HA, HG and HX modes record at 1,920 x 1,080, but HE uses the same 1,440 x 1,080 frame size as HDV. The headline act is HA mode. Not only does this offer a 17Mbits/sec data rate – the highest of any AVCHD camcorder currently available – but it is also true Full HD, with progressively scanned frames. The other modes still use interlaced video, and HE mode operates at 6Mbits/sec. But all of this is identical to the HDC-SD9. What singles out the HS9 is the 60GB hard disk. Even at the top HA quality setting, this will be enough for nearly 8 hours of footage. The HS9 still has an SD card slot, but we can’t see it getting much use with so much space readily available on board.

Unfortunately, despite the larger body compared to the SD9, the HS9 doesn’t have any extra features for the enthusiast. There is no accessory shoe, no microphone input, and no headphone jack. And what looks like a manual focus ring merely unscrews the automatic lens cover. The HS9 also still has the function joystick around the side, rather than at the back as with most Panasonic camcorders. So you will need two hands to operate it, rather than one.

This makes manual focusing using the joystick a little trickier than it should be. But at least the HS9 sports Panasonic’s characteristically comprehensive set of manual controls. The iris can be varied between F16 and F1.8 (fully open), then up to 18dB of gain added on the top in 3dB increments. The shutter can be independently varied between 1/50th and 1/8000th of a sec. The joystick also provides speedy access to manual white balancing, plus indoor and outdoor presets, as well as Intelligent Contrast (which prevents overexposure in bright conditions). Colour Night View, a Soft Skin colour setting, Low Light and Tele Macro modes are all found here too. 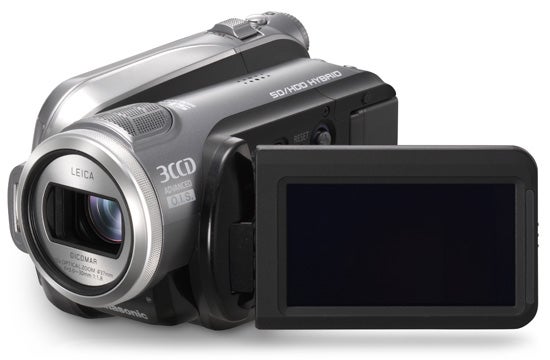 Although some of the buttons are in a different place to the SD9, the HS9 still includes a separate control for the innovative face recognition system. This detects up to five faces and ensures they are correctly exposed. So if you are shooting people against a bright sky, their faces won’t come out dark. The Pre-rec feature also has its own button. This buffers a few seconds of footage all the time. If you hit record too slowly to catch an event, you won’t have missed it because Pre-rec will tack a few prior seconds on the front. The HDC-HS9 also sports Panasonic’s new Intelligent Shooting Guide, which offers handy context-sensitive tips on how you might improve your video, without forcing you to take its advice. The suggestions range from when to turn on Intelligent Contrast and Low Light modes, to informing you when your camera moves are too fast.


The HDC-HS9 includes a five-microphone system which can capture surround sound recorded as 5.1 Dolby Digital. The directional capability can also be used to improve the Zoom Mic facility, which attempts to concentrate audio capture on the same area as the video zoom. The Focus Mic facility goes even further, attempting to cut out all background noise except that coming from what is in the frame.

With exactly the same optics and CCDs as the HDC-SD9, we were expecting the HDC-HS9 to perform identically – and it does. In bright daylight, colours are extremely vibrant, although a little more saturated than we have come to expect from Panasonic camcorders. Nevertheless, the HS9 certainly excels in optimal conditions.


With less illumination – equivalent to an adequately lit living room – the HS9 still manages decent colour. Using the manual controls to push the gain to maximum improves this even further. But there is a little grain visible, making the image less sharp than in daylight. This increases dramatically as the light drops, and the colour washes out completely. So although the HDC-HS9 will satisfy in most consumer shooting conditions, it’s not recommended for nocturnal recordings.

As an AVCHD camcorder, the Panasonic’s footage is now quite widely supported by editing software. It can be imported to the editing application of your choice via the camcorder’s USB 2.0 port. A proprietary component video connection and A/V minijack are provided for watching on a TV. An HDMI port is also available, but it’s hidden underneath the battery pack, along with the DC input. Not an ideal solution, as you can only use it when the camcorder’s on mains power, plus it’s the mini-HDMI variety, too, requiring an adapter for use with standard HDMI cables.


We forgave the HDC-SD9’s lack of hobbyist features, because its tiny size and reasonable price will make you much more likely to keep it with you at all times. Although the HDC-HS9 has almost the same features, plus a 60GB hard disk, it’s more normally proportioned and around £200 more expensive. Having Full HD video quality linked to a healthy video storage capacity will also leave many disappointed at the lack of a lens ring and the fact you can’t hook up a third-party microphone. The HDC-HS9 is still a great camcorder, and reportedly selling like hot cakes in Japan. But it would be even better with a few more enthusiast features, particularly for the money.