Every other manufacturer has thrown in its lot, joined the crowd, and now uses a single, large CMOS sensor for high-end HD camcorder models. But Panasonic has continued its backing for the traditional, three-sensor approach to image quality. The HDC-SD100 and HS100 may have heralded an unexpected move from CCD to CMOS for Panasonic, but they still sported a trio. The HDC-HS300, our first taste of Panasonic’s 2009 range announced at CES, sticks with the tripartite approach, too. But this time each one is bigger and of a higher resolution.


The previous generation of Panasonic 3MOS models used 1/6in sensors, each with less than the full pixel resolution required for Full HD. But the HS300 integrates three 1/4.1in CMOS sensors and each one has 3.05-megapixels. When shooting video, a letterbox of 2.05-megapixels within this is used, but still images get to use up to 7.95-megapixels.


So, on paper at least, the HS300 promises more detailed video and digital photography than any consumer Panasonic camcorder ever before. With a bit of interpolation, still images can be snapped at up to 3,984 x 2,656 pixels, although only when the camcorder is in photo mode. Otherwise, the upper limit is 3,840 x 2,160 pixels if you want to shoot video at the same time. 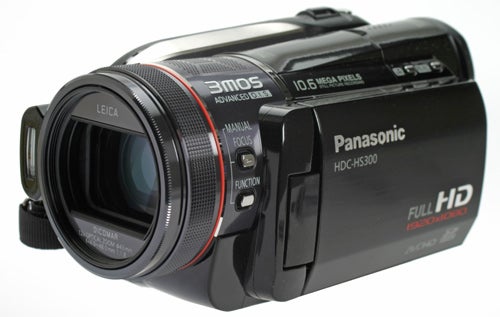 However, although the sensor system has had a major overhaul, the electronics behind it have remained essentially the same. Whereas Canon has updated its latest models such as the HF11 to support the top H.264 Main-Profile Level 4.1, which allows a 24Mbits/sec data rate, Panasonic has stuck with Level 4.0. This means the top data rate on offer is 17Mbits/sec, although we haven’t been able to see much difference in quality between the two with consumer camcorders. 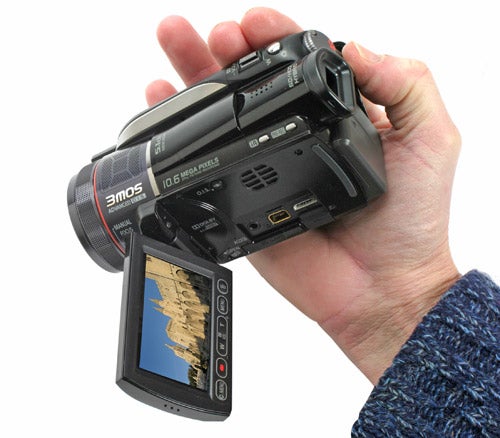 Since this is a Panasonic HDC-HSxxx camcorder, the HS300 uses a hard disk for recording. The capacity has been doubled over the HS100, from 60GB to 120GB, so now you can pack in 15 hours of footage even at the top quality setting. There’s an SDHC card slot, too, and files can span between HDD and flash memory without having to stop the camcorder in between.

Fortunately, Panasonic has added to the HS300 without taking away what made the SD100 and HS100 close to being the best HD camcorder releases of last year: its lens ring. This excellent addition to the previous generation made accessing the main manual settings a doddle. Aside from manual focusing, the lens ring can perform an array of other functions. However, flexibility has been reduced a little in the HS300. With the LCD open, the only alternative function is zooming. The other features become available when you use the electronic viewfinder. 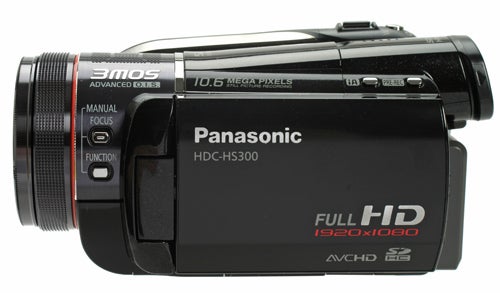 This is because the HS300 now includes a touchscreen LCD, which offers a Function menu containing the main manual settings. The iris is now controlled from here, with settings from F16 to F1.8 available, and you can add up to 18dB of video gain on the top as well. The shutter control is also part of the touchscreen Function menu, providing options from 1/25th to 1/8000th. Similarly, white balance is now operated via the LCD.

The touchscreen has one particular reason for its existence, however, and this is the latest extension to Intelligent Auto. Sony has long offered touch control over focusing and exposure, and it’s a very neat feature, allowing you simply to press the place in the frame you want focused or exposed correctly. But Panasonic has met Sony and raised the stakes. Coupled with face detection, the HS300 can track a moving subject. Simply click in the frame on the subject you want to track and a bounding box will move with it. This area will be the reference for automatic focusing and exposure. If you want to capture someone walking towards the camera, it’s really quite effective. 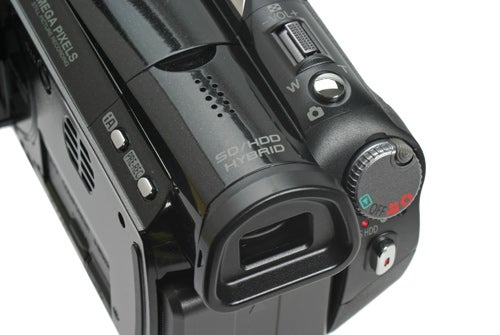 However, the presence of the touchscreen LCD and the accompanying simplification of the lens ring functions isn’t entirely a step forward. We would like to have seen the option to use the lens ring in the same way as with the SD100/HS100, if so desired. As before, the Digital Cinema mode combines 25p progressive shooting and xvYCC colour, and we would also have preferred these two as separate functions. 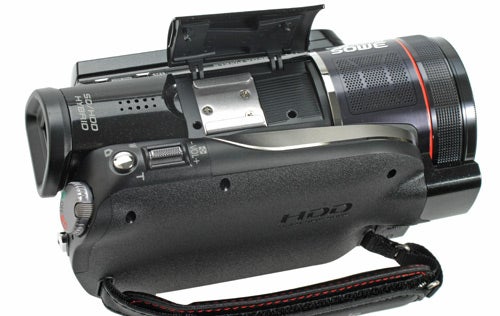 The HS300 includes the cross-shaped array of microphones included with its last few predecessors, so can record 5.1 surround sound natively and perform clever directional audio tricks. But there is also a full-sized standard accessory shoe on the top, a microphone minijack input on the side, and a headphone minijack for monitoring levels. So every enthusiast base has been covered.

Panasonic gave us a preview of the HS300’s video quality at the tail end of 2008 – but we had to promise not to tell until after the official announcement at CES 2009. It was hard to hold in our excitement, as the demonstrations looked very convincing indeed. The HS300’s sensors are similar in size to the high-end Sony HDR-FX7E’s, giving it the potential to be a consumer camcorder with truly pro-grade image quality.

Putting the HS300 through its paces ourselves, we found that it lived up to our expectations. The level of detail and colour fidelity this camcorder can produce is nothing short of stunning, in virtually all conditions. Low light performance is particularly amazing. There is a certain amount of grain, but the level of colour maintained at very low levels of illumination is a revelation. Overall, this is the first consumer camcorder we’ve seen which has managed to exceed the high benchmark set by Canon’s excellent HF10, HF100, HG20 and HF11. 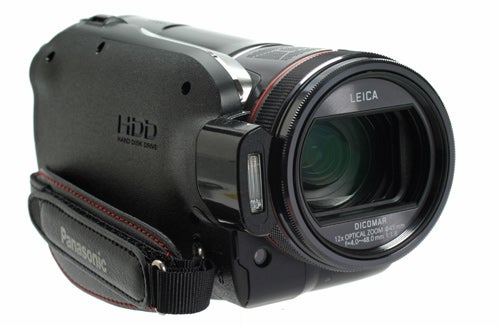 Since the AVCHD files created by the HS300 are no different from the last few models, compatibility with editing software is now near universal. We didn’t have trouble editing footage with any of the latest versions of the mainstream apps. If you just want to watch footage on a TV, a comprehensive set of connections are available, including mini HDMI, plus component and composite analogue. However, no adapter is included for hooking up to a full-sized HDMI port.


When Panasonic released the HDC-SD100 and HS100, we loved the company’s continued dedication to ‘prosumer’ features. These camcorders were not dumbed down – in fact, they regained some of the functionality of MiniDV all-time-greats like the NV-GS400. But the image quality couldn’t quite knock Canon off its pedestal. With the HDC-HS300, Panasonic has at last covered all the bases. This could well be the best camcorder released all year. Panasonic’s competitors will need to pull off something special to beat it, although the near-£1,000 price will deter the video-making masses.