Panasonic’s HDC-HS300 is currently our favourite high-end camcorder. It boasts a heady combination of excellent image quality and comprehensive features for enthusiast videomakers. But it also costs over £800. Fortunately, the HDC-HS300 has a cheaper brother, the HDC-HS200. Costing under £700, what has been removed to keep the costs down?


One thing which hasn’t changed at all is the imaging system. Like the HS300 and its sibling the TM300, the HS200 uses a trio of 1/4.1in CMOS sensors (which Panasonic calls 3MOS). Each one has a gross 3.05-megapixels. So there’s more than enough resolution for Full HD video, and still images at 7.95-megapixels.


However, there are quite a few features missing compared to the HS300. The internal hard disk is just 80GB, rather than the 120GB in the HS300. This is still perfectly adequate, providing enough space for nearly eight hours of video even at the top quality setting. This operates at 17Mbits/sec with Full HD resolution, although there is no progressive option. 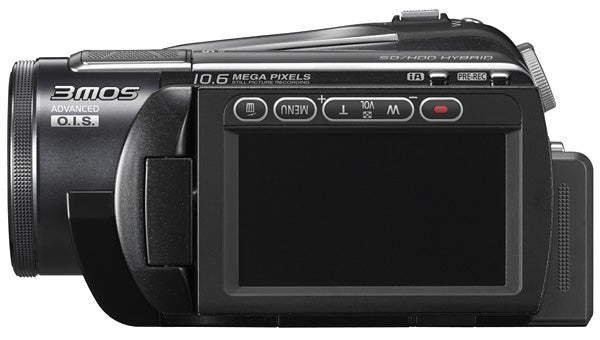 The most significant absence, however, is a lens ring, the inclusion of which makes the HS300 and TM300 such potent options for the enthusiast videomaker. Without this facility, the HS200 relies entirely on its touch-sensitive LCD panel for all manual adjustments, although the range of options is the same as the HS300’s.


In auto mode, you can still call upon the AFAE mode, which was added with this generation of Panasonic camcorders. This is a single-touch system, similar to that pioneered by Sony over five years ago, but much more sophisticated. Enabling this mode and selecting a point in the screen sets this as the reference for focus and exposure. Not only that, the camcorder will track the reference point if it moves, or if you move the camcorder, ensuring that it is always in focus and exposed correctly. 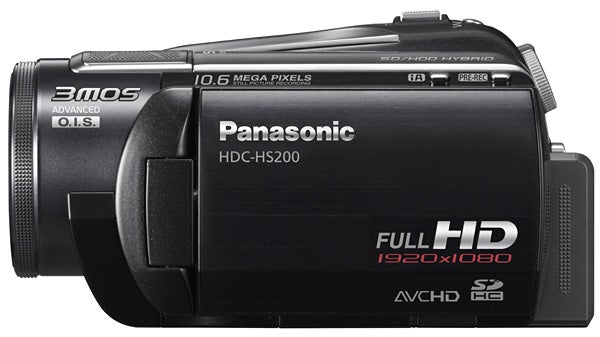 Whether in auto or manual mode, the touchscreen provides speedy access to buttons for backlight compensation, intelligent contrast, macro mode and colour night view. Switch to manual via the button on the camera body and further options appear for configuring white balance, shutter, iris and focusing. The latter isn’t that easy to use with just the touchscreen, although there is an assist function which magnifies the centre of the screen during focusing to provide a clearer view.

The HS200 incorporates Panasonic’s Intelligent Auto system, which can be toggled using a discrete switch on the top left-side of the body. This detects conditions and sets the camcorder accordingly, and the possible modes are now quite extensive. In general shooting, Intelligent Contrast is turned on to bring out details in highlights and shadows. If human subjects are found within the frame, the camcorder will switch to portrait mode and turn on its face detection system, using any faces detected as reference for focus and exposure. There’s an outdoor option, which prevents expanses of sky being overexposed, and macro mode will be invoked when the subject matter is very close. There are also four different modes for low illumination, including spotlight, low light, night portrait and night scenery, although the latter only functions in still image mode. 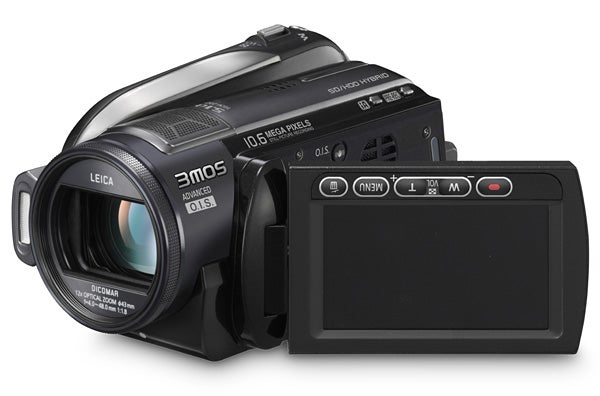 There’s a healthy array of 10 manual scene modes to choose from, too, including all the usual suspects such as sports, portrait, low light, beach and snow. The white balance options include auto and manual modes, plus two presets each for indoor and outdoor conditions – cloudy, sunny, incandescent and fluorescent lighting. The shutter can be varied from 1/50th to 1/8000th, and the aperture from F1.8 to F16. The shutter and iris can be configured independently, as with most Panasonic camcorders. You can also add up to 18dB of video gain on top of a fully open aperture. 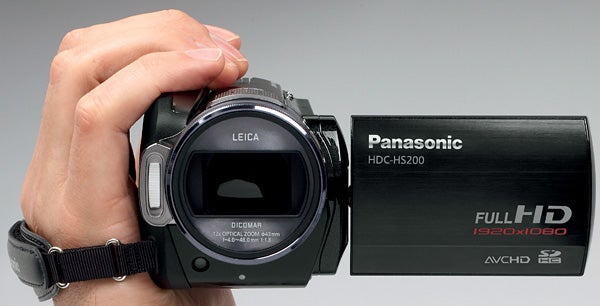 The HS200 is missing a few other features compared to its higher end siblings. It still incorporates the cross-shaped microphone array, allowing it to record 5.1-channel surround sound, but there’s no accessory shoe for attaching a higher-quality microphone or video light. The HS200 also lacks minijacks for an external microphone or headphones. So this is no camcorder for the enthusiast videomaker. 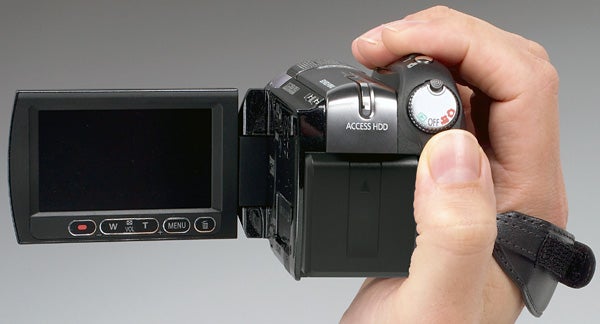 However, since it has the same optics and sensors as the HS300 and TM300, the HS200 unsurprisingly provides similar image quality, and that is to say some of the best video from any consumer-grade camcorder. Colours are vibrant, although not as saturated as with Sony camcorders. With the high-resolution CMOS sensors, the level of detail is also very high. Although the need to use the touchscreen for adjusting manual settings precludes really precise picture control, in auto mode the HS200 manages well, and with AFAE mode to hand you can bias focus and exposure as required. For the average user, this is perfectly sufficient. 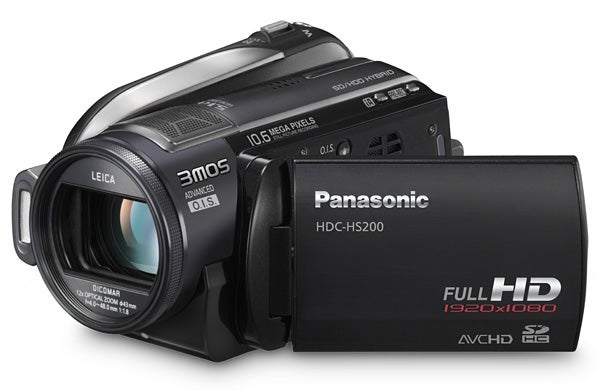 Just like the HS300 and TM300, it’s the low light performance that singles the HS200 out. Colour is maintained down to very low levels of illumination, and remains quite faithful. There is little hint of grain, with areas of shadow showing detail and nuance. Overall, results are as good as any other consumer-grade camcorder on the market, with the exception of Canon’s LEGRIA HF S10, and even here it’s marginal. The HS200 will pick up usable footage in most environments.

Still image performance is pretty accomplished, too. Without interpolation, the maximum resolution is 3,264 x 2,448 pixels, but there is also a 10.6-megapixel mode which shoots 3,984 x 2,656 pixel stills with a 3:2 aspect ratio. Detail and colour are impressive, although the Canon HF S10’s single higher-resolution CMOS gives it a slight edge in this department as well. 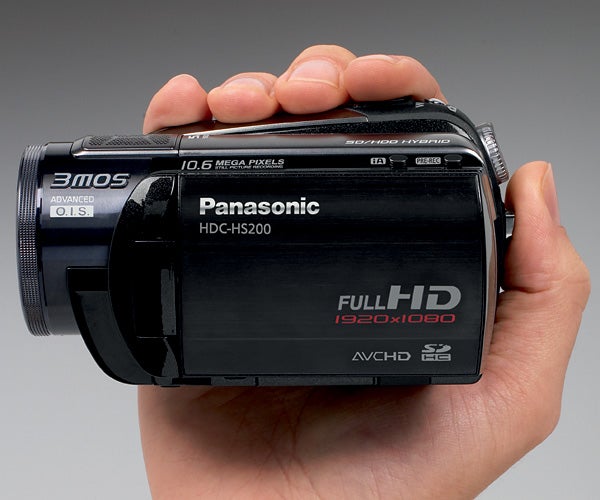 Since the HS200 records AVCHD, most editing software is compatible, and even Adobe’s Premiere Elements has supported the format since version 7. If you simply want to watch your footage on a TV, there’s mini HDMI, although no adapter is supplied. Analogue options include a minijack for composite video and stereo RCA audio. There’s also a proprietary connection for component analogue video. 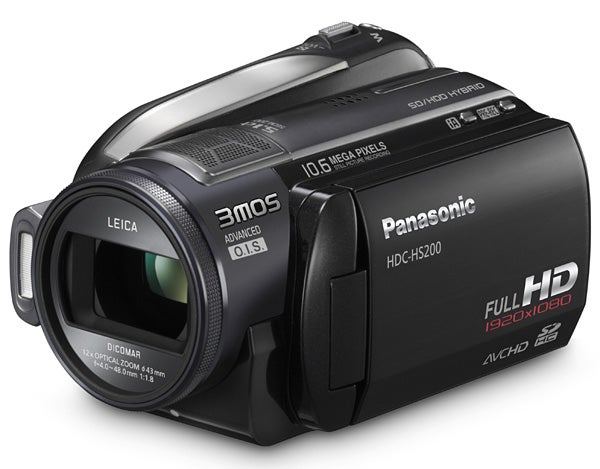 
So the Panasonic HDC-HS200 is capable of impressive image quality, and if you want the best picture, but probably won’t use the manual features of the HDC-HS300 and TM300, it’s a great-value compromise. If £700 is still pricey, Panasonic also makes a camcorder identical in features to the HS200, except that it records video to SD memory instead. This is the HDC-SD200, and at under £600 it’s even more keenly priced, although you have to factor in your own flash memory.