Panasonic’s HDC range is growing rapidly in 2009, especially considering previous models remain available. After the revelation of the HDC-HS300, we now have a more mid-range new entry in the form of the HDC-HS20. Where the HS300 sports three CMOS sensors, the HS20 has just one. Where the HS300’s sensors are 1/4.1in apiece, the HS20’s is a mere 1/6in. It also has around half the gross resolution, 1.47-megapixels. So despite shooting Full HD, the HS20 is unlikely to be in the same league for image quality.


Being a Panasonic HS camcorder, the HS20 uses a hard disk for recording, with a slot for SD memory also available. The hard disk has a healthy 80GB capacity, and uses the AVCHD format for recording. The same compression options are available as other recent Panasonic HD camcorders, with the top HA mode using 17Mbits/sec. So the hard disk is enough for over 10 hours of footage. 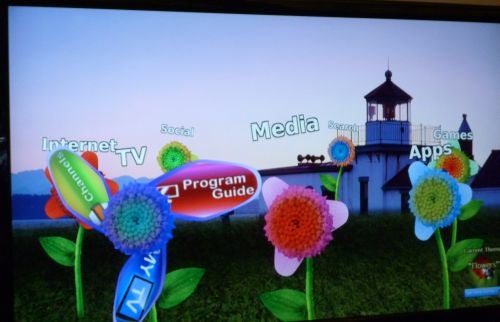 The HS20’s overall chassis design is reminiscent of the high-end HS300, but it is missing a few key features, aside from just being smaller. No accessory shoe is integrated, and neither are minijacks for headphones or microphone, indicating this camcorder’s lower-end orientation. The electronic viewfinder is missing too. However, the small sensor allows the HS20 to sport a healthy 16x optical zoom, so you won’t need to bother with resolution-depleting digital zoom. 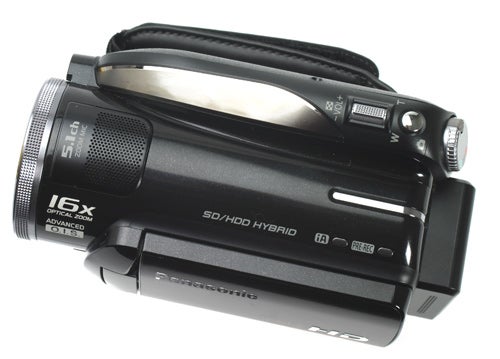 Unfortunately, what looks like a lens ring is actually just a textured grip. There is still an automated cover for the optics, and another thing the HS20 has in common with the HS300 is that it also sports a touchscreen. So the majority of options are configured using this, although there are separate buttons for enabling manual mode and turning off the optical image stabilisation. Panasonic has given low light situations a boost by integrating an LED video light, which also has a separate button. 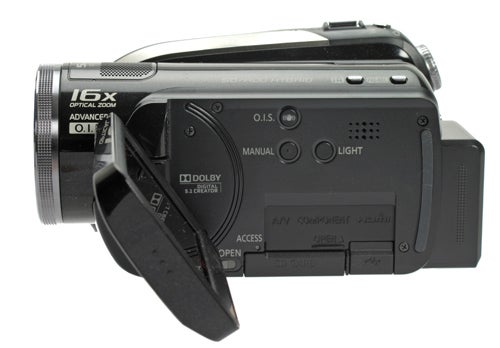 Apart from the top buttons to enable Intelligent Auto and PRE-REC modes, everything else is configured through the touchscreen. This includes the AFAE mode introduced with the HS300. So you can touch a point in the screen and the camcorder will automatically adjust focus and exposure around your selection. Sony touchscreen camcorders provide a similar facility, but focus and exposure must be set separately.

Panasonic has even tied AFAE in with its face detection technology. If the point you indicate is a face, the AFAE system will track it as it moves, adjusting focus and exposure accordingly. The process is far from infallible, as the lock will be lost if the subject turns away from the camcorder. But it’s undeniably clever when it does operate according to design. The HS20 also sports the Intelligent Auto system. This detects conditions and applies settings accordingly, such as Intelligent Contrast in bright sun, or Low Light Mode in poor illumination. 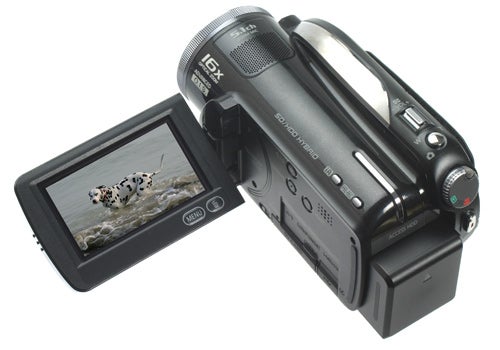 In manual mode, you can configure the same range of options as with most Panasonic camcorders, all via the touchscreen. Aside from auto mode, white balance choices include two indoor lighting presets, plus cloudy and sunny, or you can go fully manual. The shutter can be configured from 1/8,000th to 1/50th (although the shutter drops to 1/25th in Low Light Mode). The iris settings range from F16 to F1.8 (fully open), and up to 18dB of gain can be added on the top. But the handy histogram view of the HS300 is not included with the HS20. Without the lens ring, manual focusing is also performed via the touchscreen. This is a little fiddly, despite the Focus Assist mode that magnifies in the centre of the frame to provide a temporary closer view. 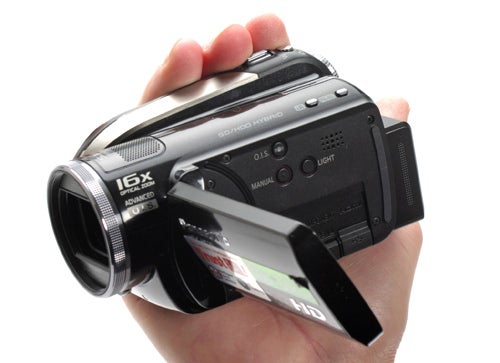 The HS20 can shoot digital photos, but its abilities here really pale in comparison to the HS300. The effective pixel count for still images (and video) is just 1.17-megapixels, although Panasonic adds some interpolation to boost this to 2.1-megapixels, so you can shoot photos at the 1,920 x 1,080 resolution of Full HD. This will be no replacement for a dedicated compact, though.


The HS20 continues to offer 5.1-channel surround sound, using an array of microphones to provide directional audio capture. These allow a zoom mic function, too, and you can set levels manually. Panasonic also still includes the Digital Cinema mode, which widens the colour gamut for compatible HDTVs, but also bundles progressive shooting.

If the HDC-HS300 blew us away with its improved quality over Panasonic’s previous HD generation, the HS20’s single sensor should put it a step in the other direction. In fact, the results aren’t so far behind, particularly when the lighting is favourable. Reds are shifted a little too much in the orange direction, but otherwise colour reproduction is saturated and faithful. No ghosting is evident on moving objects, either – something which the SD9 has a mild problem with. There is a small hint of grain, however, and close up the image is nowhere near as sharp as previous three-chip models. 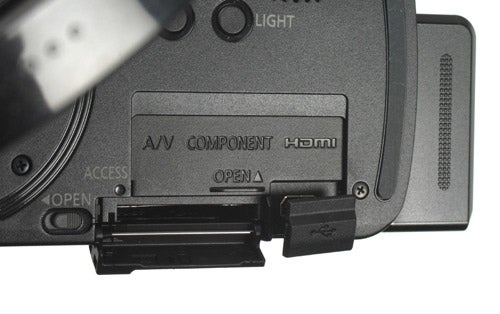 Performance in poor illumination is assisted by the video light, which by default switches on whenever required. With the light manually off, Intelligent Auto enables Low Light Mode. Although the video light is effective in small spaces, its useful range is less than 5m. The Low Light mode drops the shutter to 1/25th, which helps a little, but colour information still disappears quite rapidly as the illumination is reduced, and a multicoloured grain permeates the image. The HS300, in comparison, retains much more colour, and the grain is finer and monochromatic, making it less intrusive. 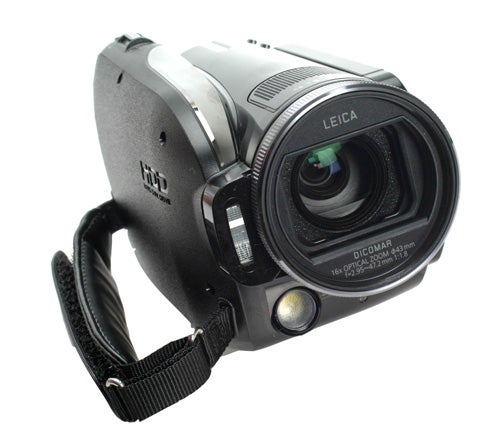 When editing footage, the HS20’s USB port allows its hard disk to act as a removable storage device. So you can simply drag off the standard AVCHD files and edit them in most popular PC editing apps. Significantly, Panasonic is now explicitly claiming direct compatibility with iMovie on the Mac. For watching on a TV without editing, a mini HDMI port is available, plus a proprietary port for component analogue and minijack for composite. Cables are provided for the latter, but no adapter is included to attach mini HDMI to the full-sized version found on HDTVs.


With Panasonic’s own HDC-HS100 now available for around £50 more, and the SD memory-based HDC-SD9 coming in at under £400, the HDC-HS20 currently sits in a bit of a no-man’s land within Panasonic’s growing range of HD camcorders. Its performance is a little behind even the HDC-SD9 overall, and its low light abilities are noticeably inferior. Although the AFAE and other toushcreen features add a new dimension, and its 80GB of storage is generous, the HDC-HS20 needs to drop below £500 to offer compelling value.