Just like London buses, you wait all year for a fully-featured AVCHD camcorder, then two come at once. In the case of the Panasonic HDC-HS100, this isn’t so surprising as it’s the sibling of the HDC-SD100, in the same way that the HDC-SD9 is the sibling of the HDC-HS9. Where the SD100 records exclusively to SDHC flash memory cards, the HS100 uses a hard disk instead. 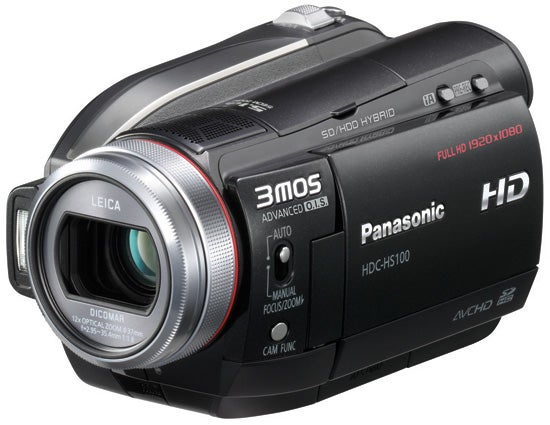 The hard disk has a 60GB capacity, which isn’t as large as the top models in JVC and Sony’s ranges. But it’s still enough for 7.5 hours of footage even at the HS100’s top HA quality setting. This records at 17Mbits/sec, which is still the highest data rate of any AVCHD camcorder currently available, although there are models due later in 2008 that will exceed this. The hard drive pushes the HS100’s weight to 482g with battery, 100g more than the SD100. It’s also about 1cm fatter.


The HS100 is Panasonic’s second camcorder to sport CMOS sensors instead of the company’s usual CCDs. But it still uses three smaller 1/6in units, rather than the single larger one favoured by virtually every other manufacturer now, even JVC. Whilst three sensors have traditionally allowed a better colour signal, one large CMOS has proven the better choice for low-light performance in consumer models. 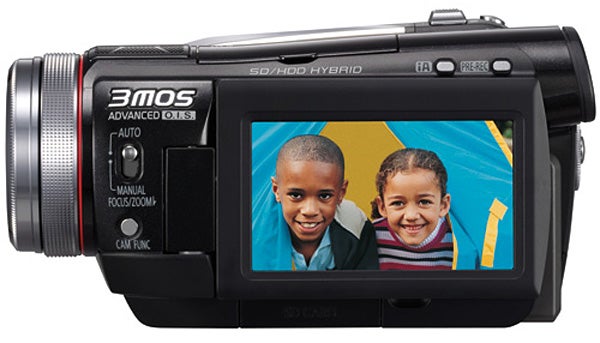 Thanks to the fatter body, the HS100 shifts its camera/VCR mode dial back to the rear, with the record button in the middle – a more familiar location for Panasonic camcorders. The joystick remains in its new position on the side, underneath the LCD, which is nowhere near as convenient as with earlier designs. But, as with the SD100, you don’t actually need to use it for the main manual functions. Thanks to the lens ring, these are actually easier to access and use than ever before.


The lens ring has two primary modes. Flick the nearby switch once, and the ring performs manual focusing duties. A second flick and it becomes an alternative zoom control to the one on the top of the camcorder’s body. But the lens ring has still more functions than this. The CAM FUNC button beneath the focus/zoom switch calls up a short onscreen menu, giving access to White Balance, Shutter Speed and Iris. The lens ring then scrolls through the options, with the CAM FUNC again used to make a choice. The lens ring then configures the settings. The HS100 has a healthy four white balance presets, as well as manual and automatic options. Shutter speed can be varied from 1/50th to 1/8000th, and iris from F16 to F1.8, with the ability to add up to 18dB of video gain on the top. Shutter and iris can be varied entirely independently, too, for complete control.

For those times when you can’t be bothered with manual settings, however, Panasonic offers its iA Intelligent Auto mode. This builds on the features added with the SD9 and HS9. In iA mode, when illumination drops below a certain level, the Low light scene mode is automatically enabled. If the camera detects human faces, it will turn on Face Recognition and the Portrait scene mode. It will also enable Spotlight or a Scenery landscape scene mode in certain conditions. Otherwise, Panasonic’s Intelligent Contrast is enabled, which boosts detail in bright areas and shadows. We found the iA mode’s detection abilities were generally pretty accurate. 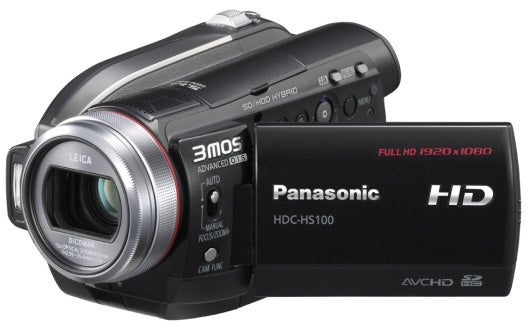 The HS100 also has a viewfinder, which is a very rare sight on consumer High Definition camcorders. In fact, only a handful of HDV models still include one, such as Canon’s HV20 and HV30, or Sony’s HDR-HC9E. So the HS100 and SD100 are unique in this respect, as the only AVCHD models with this feature. It’s not the most ergonomic viewfinder ever made, being fixed. Therefore, if you fit a longer-life battery it will be particularly hard to use. However, it will still come in handy on those occasions when the LCD is hard to see. A switch nearby toggles between the two. 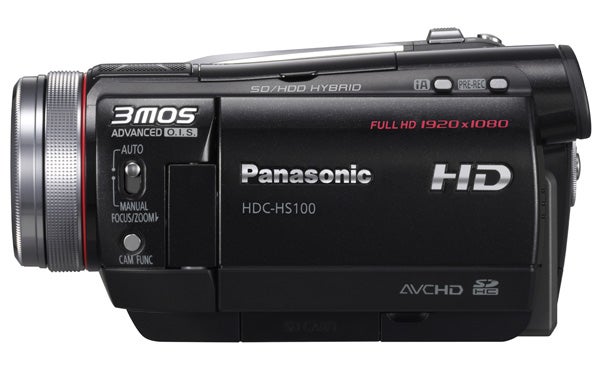 Of course, it will come as no surprise that a camcorder with all these features also incorporates a standard-sized accessory shoe, for attaching third-party external microphones and video lights. The requisite microphone minijack can be found on the front, underneath the lens, which isn’t the best place for it. The AV jack can be switched in the menu to become a headphone socket, so you can monitor audio quality. Overall, there are almost no important semi-professional features lacking with the HS100, with the exception of a progressive shooting mode.

With an identical sensor array and optics to the SD100, the HS100 unsurprisingly has identical image quality. It’s a noticeable improvement over the HS9 and SD9, which were already good. Colours are vibrant and saturated in optimal lighting. However, although the switch to CMOS has benefited low light performance a little, the image is only a little brighter than the previous three-CCD system in poor illumination. There is still a lot of grain in the lowest light. Although the grain is finer than before, it’s more unsightly than that produced by Canon’s HF10 and HF100. So the Canons still have a slight edge for sheer video quality. 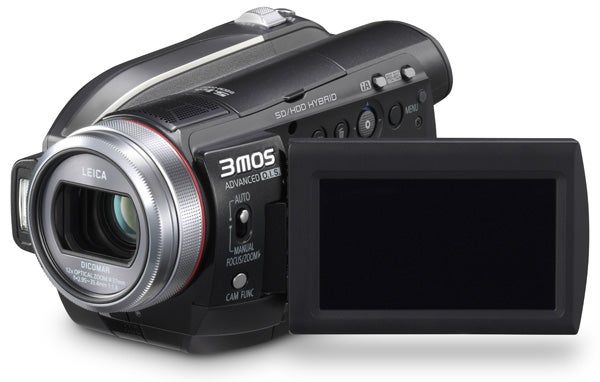 When it’s time to watch and edit your footage, the HS100 is as comprehensive as it is in other areas. As the video format is AVCHD, editing support is now wide, and even includes Adobe with the latest version 7 release of Premiere Elements. The USB 2.0 port for downloading your footage to a computer is hidden under the battery, so can only be used on mains power. The HDMI port has the same limitation, as it is located next door. It’s also of the mini variety, so will require an adapter for HDTV connection. The analogue component and AV ports are located on the side, however, so can be used on battery power.


In pure technical terms, the HDC-SD100 is more of an achievement than the HDC-HS100, considering how much it packs into such a small chassis. But the HS100’s 60GB hard disk is likely to have wider appeal, considering it only comes at a £50 price premium. Indeed, the extra 100g weight actually makes the HS100 a little easier to keep steady when shooting. So our hearts may be with the SD100’s marvellous miniaturisation, but the HS100 will probably suit most of the target market more. They’re both great achievements, though. So if you have been waiting for an AVCHD camcorder with semi-professional features, you can now choose between ultimate portability or capacious storage – both thanks to Panasonic.