Last week I found myself out in the Canary Islands enjoying some very warm weather, a superb helicopter ride and a short jaunt on a camel! The reason for this expedition was the opportunity to get my paws on Panasonic’s new high definition camcorders – honestly! What better way to test a camcorder than from a helicopter swooping down over volcanoes?


The big news was the announcement of two new high definition camcorders, using the AVCHD H.264 standard – that in itself is reason enough to rejoice, as anyone who’s filled their hard disk up with HDV footage will tell you! With your raw footage already efficiently compresses, it will make storage far less of a concern, while the need to edit and offload big projects won’t be as pressing.


The big difference between the two models is that the HDC-SD1 uses SD cards to record the video, while the HDC-DX1 uses DVD discs. I spent most of my time with the former and I was pretty impressed overall. I’m a firm believer in flash memory as a digital recording medium, and now that SDHC cards are available, busting through the previous 2GB limit, the format looks even more compelling. Impressively, Panasonic actually bundles a 4GB SDHC card in the box – quite a boon, considering that most traditional camcorders don’t even ship with a tape in the box!

Weighing in at only 430g, the HDC-SD1 will be hardly noticeable in your bag, while dimensions of 74 x 69 x 142mm mean that it won’t take up much space either. But it’s not just the size and weight that impressed me, the SD1 is also very comfortable to hold and use, while the light weight makes one handed operation an option. One handed operation is made all the more tangible by the fact that Panasonic has also implemented optical image stabilisation so you can get the best out of the Leica Dicomar lens. With a 12x optical zoom, that OIS definitely comes in handy at the telephoto end!


General handling on the SD1 was superb. Sliding my hand through the strap allowed me to wrap my fingers around the barrel for a very solid grip. Holding the camcorder in this way means that most of the main controls will be easily accessible by your thumb and general operation soon became instinctive. The start up time on the SD1 was also impressive, with a rough guess at around five seconds from powering on to shooting – that’s not great by digital still camera standards, but for a camcorder it’s pretty damn good. The upshot being that you’re more likely to catch those impromptu movie opportunities with the SD1.

The zoom control is very smooth and as long as you’re not too rough with it, the auto focus can keep up. Of course, I’m hoping that most camcorder users have progressed beyond the constant “zoom in – zoom out” antics that have traditionally plagued home movies. Please, for the sake of your viewers, set your focal length and then shoot your footage – having the focal point constantly jumping forward and backward doesn’t make for an immersive watching experience!


Both camcorders utilise a 1/4in 3CCD image sensor, providing 520,000 (x3) effective pixels. Theoretically the 3CCD system will provide better detail resolution than a single sensor setup, whether CCD or CMOS – something that Panasonic was keen to evangelise at the event. Like the Sony HDR-HC3, the new Panasonic models shoot at 1,440 x 1,080, and like Sony, Panasonic refers to this as full HD. Strangely the HDTV manufacturers are pretty convinced that full HD means 1,920 x 1,080, and since neither myself or the other journalists could figure out the discrepancy, we asked one of the engineers. The answer seemed to be that scaled 1,440 x 1,080 was good enough, while the reduced resolution also kept the size of the sensor down and ultimately the size of the device. It’s true that footage recorded at 1,440 x 1,080 does look exceptionally good, but I think I’d still like to see 1:1 pixel mapping if I had a 1,920 x 1,080 television! 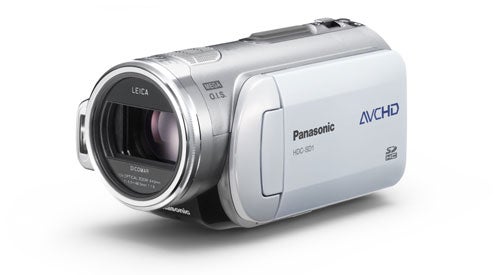 Getting your footage off the SD1 couldn’t be easier – especially when you consider that most traditional digital camcorders don’t even come with a FireWire cable in the box. Since your video is written to SD card, you can simply whip the card out and stick it in a card reader or pull it direct from the camera using a USB cable. So when you take the bundled card into account, you really are getting almost everything you need in the box.


Like the Sony HDR-HC3, the HDC-SD1 has an HDMI port so you can watch you movies direct from the camcorder on you HDTV in all their high definition digital glory. Going back to my “almost” everything in the box, unfortunately you’re not getting an HDMI cable, but at least you do get a component video cable thrown in.


The SD1 will shoot in three quality modes with varying bit rates of 6Mbit/sec, 9Mbit/sec and 13Mbit/sec – the lower two settings utilise a variable bit rate, while the top quality setting records at a constant 13Mbit/sec. Using the middle “normal” setting, you’ll get an hour of footage on a 4GB SDHC card, and with 4GB cards available for around £45 online you should be able to carry a couple of spares in your pocket.

The 3in fold out monitor mirrors the widescreen resolution of the sensor. The screen is not touch sensitive though – something that all the UK journalists kept forgetting as we constantly prodded the display to no avail. Instead the menus are controlled via a small joystick, which works well enough. I would however like to see Panasonic adopt the touch screen method favoured by Sony, since it does make controlling the camera (especially in playback mode) considerably easier. I also found that I missed having secondary Record and Zoom controls located on the screen, since I often find myself using these on my Sony HC3.


You can also take still images, which will be recorded at 1,920 x 1,080. Of course that brings back the question as to why the video is limited to 1,440 x 1,080, but I will do my best to get to the bottom of this one. Stills are recorded in JPEG format and look reasonable – just don’t expect to be able to throw your digital still camera away. 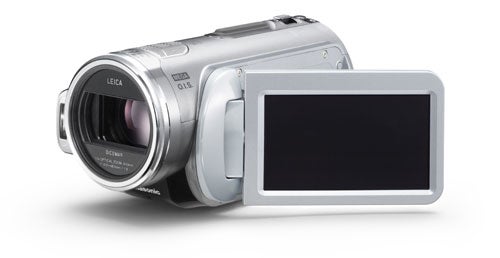 But it’s not all about the pictures, Panasonic has also invested some time and technology on the audio side. The SD1 will record sound in full 5.1-channel Dolby Digital surround, but that’s not the really clever part. The SD1 also has a nifty “zoom mic” feature, which means that if you’re zooming in on a subject, the SD1 will record the sound emanating from that subject in the distance, not the ambient sound from the physical location of the camcorder. This could be pretty useful if you want to record those boring speeches at weddings, or those boring presentations at seminars etc. Of course I wouldn’t ever suggest that you could use such technology to unobtrusively listen in on other peoples’ conversations, but I can imagine a fair number of private investigators saving up for one of these camcorders – it will be interesting to see if the divorce rate increases when the SD1 is released!

I didn’t spend anywhere near as much time with the HDC-DX1 as I did with the SD1, but my first impressions are that much of what I like about the SD1 doesn’t apply to the DX1. Although the basic specs are shared between the two, when it comes to size and weight, the DX1 can’t come close to the SD1, measuring 92 x 91 x 174 and weighing a hefty 680g. Obviously the increased size and weight is a direct result of the DVD recording system.


Unfortunately, because of the size of the DVD media, the DX1 is nowhere near as comfortable to hold as the SD1. Instead of your fingers wrapping around the barrel as they do on the SD1, the tips of your fingers end up clawing the top of the disc enclosure. The result being a far less steady grip and a far less comfortable one. 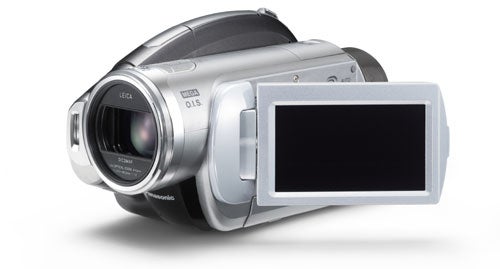 But the general ergonomics were far from my biggest gripe with the DX1 when I used it, that honour went to the excruciatingly slow start up time. Every time I saw something that I wanted to shoot I was faced with a flashing message covering the whole display – READING DISC. And that was pretty much what I saw most of the time, because by the time READING DISC stopped flashing, I had usually missed what I wanted to film in the first place. The most ridiculous part is that you can load the DX1 with an SD card for taking still images, but you’re not even allowed to shoot stills while its READING DISC!


Amazingly, there’s an even bigger worry with the DX1 regarding its choice of media. Most consumers buy DVD camcorder for the sole purpose of being able to playback the discs in any DVD player as soon as they finish shooting. But since the DX1 is encoding its video in H.264, you’re not going to be able to play it back in a DVD player. Of course you can playback your discs in a Blu-ray player, but only hardcore early adopters would buy a Blu-ray player right now and hardcore early adopters are far more likely to buy the SD1 in the first place! 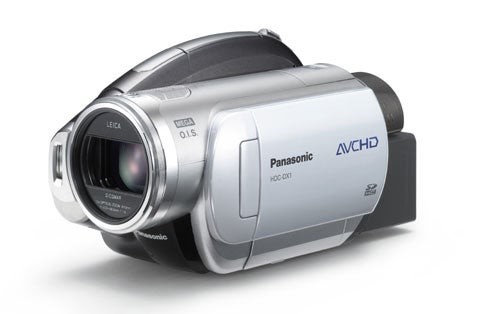 To be fair, Panasonic couldn’t give me any indication of pricing at this stage, so the DX1 could be considerably cheaper than the SD1. But even then I would rather save up the extra for the SD1. You can fit about 40 minutes of normal quality HD video on a dual layer DVD, which again makes the SD1 a better prospect – although discs are obviously cheaper than SD cards.


I’m not going to talk about video quality here, despite the fact that I got some great footage while I was in Lanzarote. Panasonic told me that the cameras we were using were still pre-production, so I’d rather hold off any comments on video quality until I have a production sample to test, which hopefully won’t be too long. Although neither model will be available at retail until March 2007 anyway.


Panasonic has promised me that review samples will be forthcoming shortly, so be sure to check back for full reviews of both the HDC-SD1 and HDC-DX1 in the coming weeks. One thing’s for sure though, if my time with the SD1 is anything to go by, Panasonic will have a hard time getting the review sample back from me!