A totally new feature is the inclusion of WiFi, the features of which are accessed via a discrete button next to the iA one. Panasonic follows the trend started by Canon and JVC with the LEGRIA HF-M52 and GZ-EX215 respectively, but takes the best of both. You can attach the camera to your existing wireless network, or set it up as a standalone access point you connect directly to. There’s no NFC to assist with setting the wireless functions up – as on the Panasonic V720 and Panasonic V520 – but it’s relatively easy to enter the necessary codes on your phone or the camcorder, and Panasonic offers a QR Code option to help with setup as well. 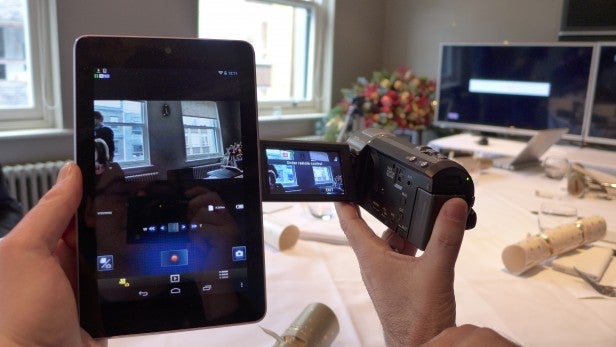 Once the WiFi is configured, a variety of functions become available. Using the Panasonic app for iOS or Android, you can control the camcorder’s zoom and record functions, and even set the quality for both video and still images. You can also view the contents of the camcorder’s memory card. There’s a DLNA server mode as well, which we had no trouble connecting to with a Samsung Smart TV. You can use the camcorder as a home monitor, although we had trouble getting this to work across our network firewall. You can also broadcast video live via USTREAM, in a similar fashion to JVC’s ADIXXION GC-XA1BE, making the HC-X920 a real contender for guerrilla live reporting, assuming you can hook up to WiFi at the shooting location. 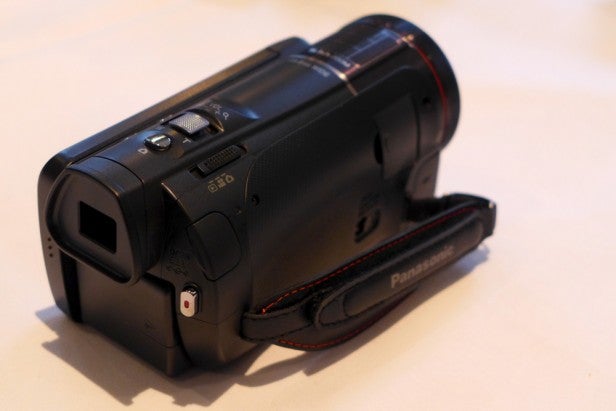 In keeping with Panasonic’s last few generations, the HC-X920 doesn’t have an accessory shoe built in, but sports a slot on the side into which can be slotted the supplied L-shaped bracket. This provides a standard-sized shoe, so the full range of third-party accessories will be compatible; things such as lights, flashes and microphones.

Key for many enthusiast video artists are the inclusion of minijacks for an external microphone and headphones (for live monitoring of your audio as well as watching back your footage). These are situated next to the hotshoe and are protected by a plastic cover. The built-in audio is pretty capable without this, though. A matrix of multiple microphones on the top provides 5.1 surround sound recording, but also allows effective wind cancellation and a zoom mic function. 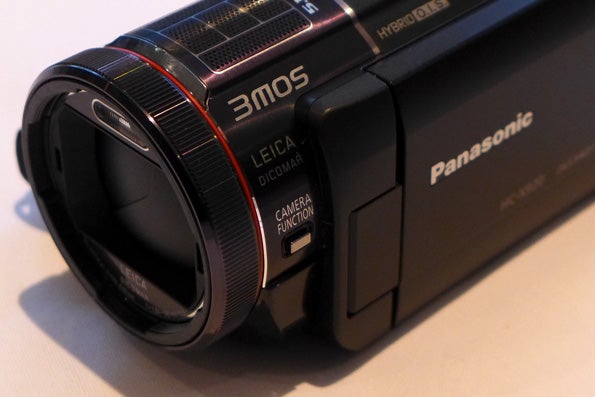 As with the HC-X900, you can upgrade this model to shoot 3D with the addition of the VW-CLT2 adapter. However, this won’t take the HC-X920 into the same league as dedicated 3D camcorders such as JVC’s Everio GS-TD1 or Sony’s HDR-TD20VE. It requires calibration every time you connect it, doesn’t provide the same quality as a camcorder with two dedicated sensor paths like the JVC and Sony models just mentioned, and seriously limits camcorder settings when in use. In particular, the zoom is reduced to a paltry 1.5x. So if the HC-X920 has a limitation, it is its half-hearted 3D.

With its large back-side illuminated CMOS sensors, however, the HC-X920 offers unparalleled 2D image quality in every possible condition. Colour fidelity is on par with the previous model, but there’s an even greater level of detail, although the HC-X900’s picture was already so good you have to look very closely to see this. Low light performance is marginally improved, too. The HC-X920 can maintain colour and detail to even lower levels of illumination, with absolutely no sign of grain.

The HC-X920 is priced £50 above the RRP of the HC-X900, but it’s still sub-£1,000, and should be £50-100 beneath this when it becomes more widely available. With even better performance and additional WiFi-features, it’s well worth the extra cash anyway. The HC-X900 was the king of consumer-grade camcorders, and the HC-X920 is heir to its throne. If you’re looking for the best 2D camcorder on the market, Panasonic has raised the bar yet again with the HC-X920.