Not everyone buying a premium camcorder fancies themselves as an amateur Spielberg. Some want the image quality, but don’t plan on using the extra features. For those in this camp, Panasonic offers the HC-X800, which is essentially a cut-down version of the brilliant HC-X900. But has too much been removed to make the £100 price difference a worthwhile economy?

In a nutshell, all the enthusiast features are missing from the X800 compared to the X900. The most telling omission is the lens ring, which gives the X900 such great control over focus, shutter and iris. But also absent is the slot for the accessory shoe bracket, as well as the minijacks for an external microphone and headphones. So you will be stuck with the integrated stereo sound, as this camcorder also lacks the 5.1 surround sound of the X900. The missing secondary electronic viewfinder won’t be such a loss to most users, but it’s still something that could be useful in bright conditions. 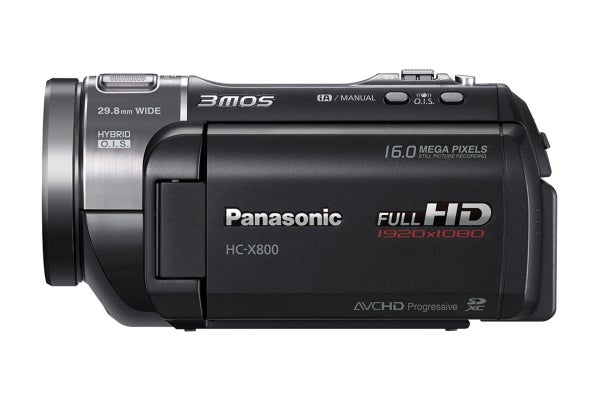 The core specifications are identical to the X900, however. There are three 1/4.1in CMOS sensors, each with 3.05Mpixels, and each devoted to a different axis of the colour spectrum for better fidelity. A bit of interpolation is thrown in to bump up still images to 14.7Mpixels using all three sensors, providing a top resolution of 5,120 x 2,880. For recording, the X800 supports the recent AVCHD 2.0 standard, which extends the format up to Full HD at 50p and 28Mbits/sec. No memory is built in, and a 16GB card will give you about 75 minutes at the top data rate.

The standard optical zoom is 12x, but there’s an Intelligent Zoom option that boosts this to 23x, using some of the spare sensor pixels so resolution isn’t reduced. Image stabilisation comes in the form of Panasonic’s excellent Hybrid OIS . This improves still further on previous incarnations to add yet another axis for even more powerful smoothing. We have found Hybrid OIS to be the most effective consumer-grade image stabilisation available, providing the smoothest handheld shooting whether at high telephoto or when shooting whilst walking or inside a moving vehicle. There’s an OIS Lock function, as well. Holding down the onscreen button further accentuates the stabilisation, although not when performing camera moves.

Another feature which hasn’t been lost in the X800 is the ability to shoot in 3D. You can add the WV-CLT2 optional lens attachment to convert the single lens path to two. This is an improvement over the original WV-CLT1, with a faster attachment method and simplified calibration. Best of all, you can now zoom in 3D mode, albeit only by a factor of 1.5x. Thanks to the AVCHD 2.0 support, video can be recorded in the frame-alternating MVC format as well as Side-by-Side, which provides distinct quality advantages. However, the X800’s 3D abilities are still no match for dedicated 3D camcorders such as the JVC Everio GS-TD1 or https://www.trustedreviews.com/sony-hdr-td20ve_Camcorder_review Sony HDR-TD20VE. These both offer standard camcorder zoom factors in 3D mode as well as control over convergence. 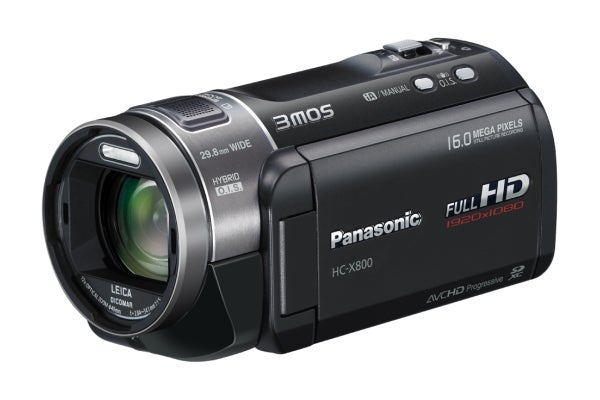 As a result of the missing lens ring, all settings must be configured via the touch-screen LCD, but the range on offer is exactly the same as with the X900, so very extensive indeed. There’s a quick menu to the left of the LCD. In Intelligent Auto mode, this provides access to extra zoom and record buttons, which are handily placed for two-handed shooting, the OIS Lock button, backlight compensation, and the Pre-REC buffering function. You can also toggle AF Tracking and enable a mode where swiping the screen zooms in and out.

Switch to manual, however, and an extra menu page appears. Here you can configure focusing using an onscreen slider, and similarly adjust shutter from 1/50th to 1/8000th, as well as iris from F16 to F1.6, with up to 18dB of video gain available on top of a fully open aperture. Above 12dB a small amount of grain does start to show itself, but not an in unsightly way – this is video gain you can actually use. Head to the main menu, and you get access to a comprehensive selection of scene modes, manual microphone level controls, and even picture adjustments. These allow you to tweak sharpness, colour, exposure and white balance offset in a customised way. So there’s the same level of fine control over shooting as the X900, it’s just not so easy to get to.

With its three-sensor system, the X800’s image quality is nothing short of outstanding. Detail and colour fidelity are both the best we’ve seen from a consumer-grade camcorder, on par with Panasonic’s own HC-X900. Even when there’s a considerable variation in contrast, the X800 resolves a good level of detail both in areas of shadow and areas of great brightness. Performance in low light is exemplary as well. This camcorder can pick up decent brightness in very poor illumination, and produces an image with very little noise, even when the video gain is on its highest setting. 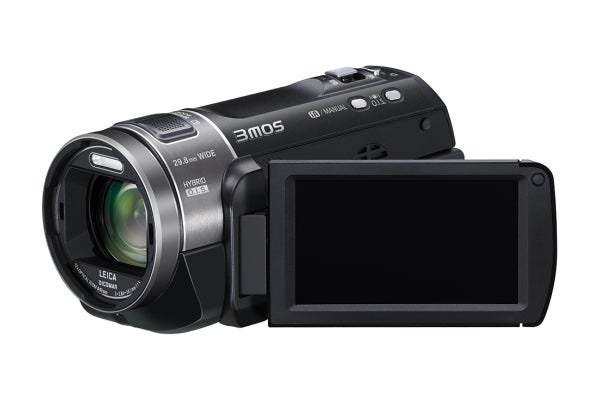 The Panasonic HC-X800 does shoot great-looking video, and with the same lens and sensor setup as the X900 its abilities are unsurprisingly identical when left in auto mode. But you also lose a lot of flexibility with the absence of the lens ring, accessory shoe and minijacks. Whilst the £100 cheaper price does mitigate this to a reasonable extent, you really will need to have no intention of more serious camcorder usage to make the economy worthwhile. The manual settings are still quite readily accessible, but if you might want the missing features at some point, the top HC-X900 would be the better choice, despite the higher cost. Otherwise, the JVC HD Everio GZ-GX1 offers more features and similarly great image quality for less.