What is the Panasonic HC-X1E?

The HC-X1E is a professionally orientated 4K camcorder from Panasonic, with a price tag to match. It goes head-to-head with Canon’s XC10, or more likely the recent XC15 update. With a host of manual controls including built-in Neutral Density filter and professional audio connections, the HC-X1E is a tempting proposition for serious amateurs, students, wedding videographers and event coverage.

The HC-X1E is a considerable step forward from its first “prosumer” 4K camcorder, the HC-X1000E, even if they look quite similar physically. Whereas the latter sports a 1/2.3-inch CMOS, similar to Panasonic’s consumer-grade camcorders, the HC-X1E upgrades the specification with a “1-inch-type” CMOS, which will effectively have around four times the surface area. Couple this with a lower 9.46-megapixel resolution, so each pixel is a lot bigger, and you have a recipe for far better image quality and low-light performance.

The shooting modes haven’t been improved, however. Frame rates max out at 50/60p, with no 100/120 frames per second high-speed option or higher. As a result, smooth slow-motion shooting isn’t an option, which is disappointing. However, both Digital Cinema (DCI) 4096 x 2160 and UHD 3840 x 2160 resolutions are available, as well as a host of Full HD, 720p and even SD options. 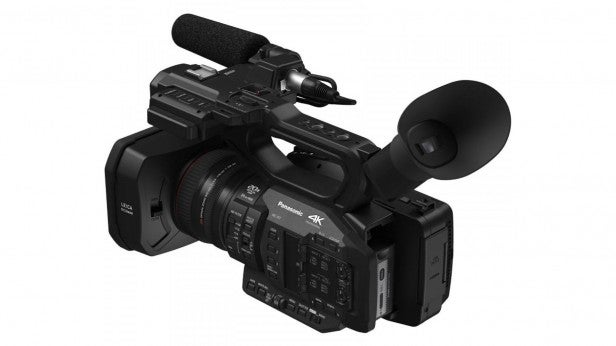 For Full HD and below, the AVCHD format can be used at data rates up 25Mbits/sec. But MP4/MOV provides some seriously high-quality possibilities, such as All-Intra Full HD at 200Mbits/sec. Unfortunately, 4K can’t be shot at this high a rate, with DCI offered at 100Mbits/sec and UHD at 150Mbits/sec, although they’re still reasonably high.

From a practical day-to-day point of view, the HC-X1E takes a different approach to Canon. Whereas the XC10 and XC15 require the use of extremely expensive CFast 2.0 cards when shooting 4K, the HC-X1E relies on SDXC storage for HD or 4K, with two slots available. Canon offers a pro-grade 305Mbits/sec in 4K, which is beyond what SDXC can deliver reliably. So the HC-X1E can use much cheaper media, but at the expense of having more aggressive compression with potentially reduced image quality.

The positioning of the EVF and LCD screen provides two handheld shooting postures. You can either hold the camera with two hands so the EVF is at eye level, or rest it on your shoulder and use the LCD panel instead. The EVF is preferable for crisp focus pulls, since it sports 1,769,000 dots; the 3.5-inch LCD offers only 1,152,000 dots.

The HC-X1E is therefore a versatile camera with which to shoot, and there’s a huge range of manual control available, with lots of discrete buttons and dials for rapid access. The built-in ND filter has ¼, 1/16 and 1/64 options. There are three lens rings, with the front one for focus, the middle for zoom, and the one closest to the body for iris, with a button nearby to enable it. The zoom control is electronic, however, rather than controlling the lens directly, so operates with a very short delay. 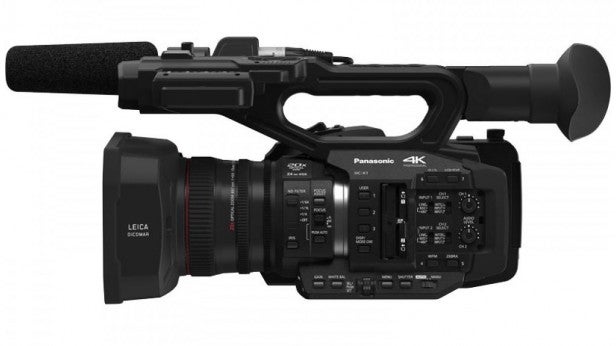 If this isn’t enough for you, there’s a small wheel at the bottom of the body that can be set to different functions via discrete buttons, including gain, white balance and shutter. There are three user-assignable buttons as well as buttons for toggling the waveform monitor, zebra, optical image stabilisation, and switching between the EVF and LCD. The latter can also be reassigned, allowing you to set up quick access to exactly what you need.

Overall, the HC-X1E is very well endowed for manual controls, and these are sensibly as well as ergonomically arranged on the camera body.

Although the HC-X1E has two XLR audio inputs, they’re in two different locations. At first glance this is a strange choice, until you think through how XLR connections are generally used, with a mono shotgun mic on top of the camera or a wireless lapel mic, or even both. It does make some sense to have the inputs for these physically separated in this way.

The two audio channels can be controlled separately with little wheels under a transparent plastic door, which allows these wheels to be adjusted when it’s closed, but keeps the other audio controls out of reach. Handily, you can send either audio input to either channel of the stereo pair, as well as selecting mic, line or +48V phantom power levels. 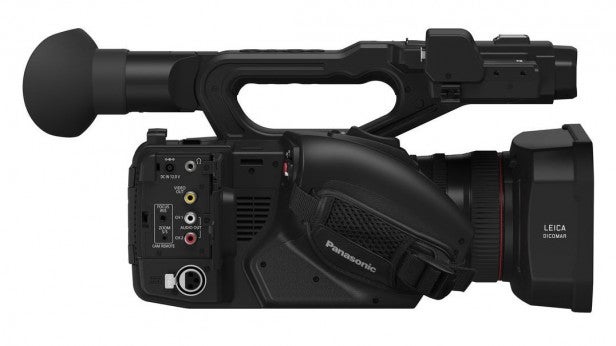 There are numerous other ports available. A USB 3.0 Host port can be found on the top, so that external storage devices from 32GB to 2TB can be attached. A USB 3.0 Micro-B connector is available for accessing the camera’s storage, as well as full-sized HDMI output and even composite analog video outputs with RCA audio. A mini-jack is available for headphone attachment, as well as a mini-jack for external focus control and micro-jack for external zoom

Where the HC-X1000E was a bit of a compromise in terms of image quality – with consumer-grade video capabilities inside a professional-grade body – the HC-X1E is a much more serious contender. The 1-inch-type CMOS is still quite a bit smaller than Micro Four Thirds or APS-C, but significantly larger than consumer-grade sensors, and the image quality is reflective of this.

Taking the HC-X1E out on a day that isn’t particularly bright, it picks up brilliant colour and plenty of detail. The 150Mbits/sec data rate is also high enough to avoid any compression issues. The larger sensor in particular comes into its own in lower light, with the HC-X1E significantly outperforming the HC-X1000E as the illumination drops. You can even get away with adding video gain in low light, without introducing significant noise.

You can watch some sample footage shot at the top 4K quality setting here.

Should I buy the Panasonic HC-X1E?

The Panasonic HC-X1E is a much more serious proposition than the HC-X1000E. It may lack high-speed shooting modes, and tie you to a fixed lens, but the latter might even be beneficial in certain circumstances – electronic news gathering, for example. It’s also capable of an approximation of the “DSLR look” that’s so sought after these days.

This is very much a “prosumer” model, and priced accordingly. But if you’re looking for a reliable, feature-rich, high-quality 4K camcorder for corporate and student videography, the Panasonic HC-X1E has plenty going for it. In that context, the cost is actually quite reasonable, too.

The Panasonic HC-X1E delivers great 4K image quality and a wealth of features for semi-professional videographers.