What is the Panasonic HC-WX970?

The HC-WX970 is Panasonic’s
flagship 4K consumer-grade camcorder. It’s a compact model that packs in a
Leica
Dicomar lens, 20x optical zoom and Panasonic’s 5-Axis Hybrid O.I.S.+
optical image stabilisation as well as other functions including HDR
movie mode and the rather odd Twin Camera.

There are still
relatively few 4K camcorders to choose from, but the benefits of 4K
recording include being able to pull 8MP still images from your footage
and giving you the option to crop closer into a scene during editing
while still retaining enough resolution for a Full HD picture.

The
Panasonic HX-A500 and  GoPro HERO3+ Black Edition action cameras offer this resolution, and Sony’s
FDR-AX100E introduced 4K camcorders for consumers. But Panasonic’s new model does
mark a shift towards 4K going much more mainstream, as it brings the
price below £900, compared to the Sony’s £1390 price tag. 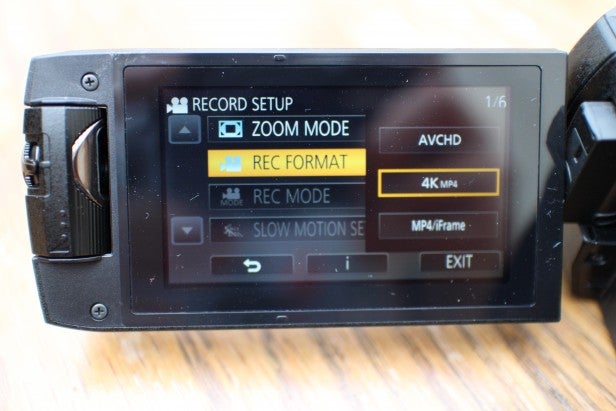 Panasonic ditched the
three-chip approach it had maintained for so long in its high-end
consumer camcorders with the HC-W850, and the HC-WX970 continues this. Like the HC-W850, it uses a
single, 1/2.3-inch backside-illuminated CMOS, but this time
with a native 18.91 megapixels.

When shooting at the
top 4K resolution, a pretty chunky 72Mbits/sec data rate is used. This
will mean only about 30 minutes of footage can fit on a 16GB SDXC card.
So you’re going to need quite a lot of high-capacity media  for your
two-week summer holiday in Magaluf. 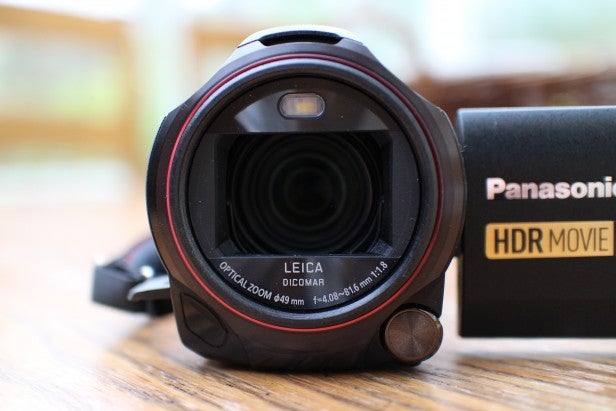 The
Leica Dicomar lens is reasonably quick, offering a nice f/1.8 aperture for arty shallow depth-of-field shots, rising to a still decent F3.6 at the maximum
20x optical zoom. There is an Intelligent Zoom available on top of this,
which uses spare sensor pixels to provide a zoom. This improves zoom to
25x in 4K mode and 40x in Full HD.

As usual, there’s also digital zoom also available
– up to a ridiculous 1,500x which, as is usually the case with digital zoom, is best avoided. 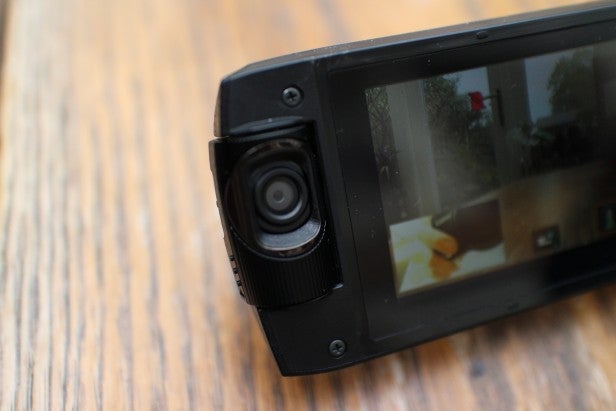 As features go, the HC-WX970’s twin camera is rather an odd one. It appeared on the HC-W850 and we’re still not sure who or when you’d use it. It’s a second 5.27-megapixel f/2.2 fixed-focus swivelling camera on the end of the flip-out LCD. It starts up Twin Camera mode when you rotate it out of locked position so you can record
yourself, superimposed into
the main frame. You can’t record it as a separate file, either… Knock yourself out, narcissists!

It may not be a pro-level camcorder, but the HC-WX970 still manages to pack in a healthy assortment of features that will help the enthusiast looking for more than just a point-and-shooter. There’s a headphone mini
jack socket at the front near the lens, and a microphone input mini jack beneath
the LCD. No accessory shoe is built in, but a bundled add-on slides
into the back of the camcorder to provide this facility when you need
it. 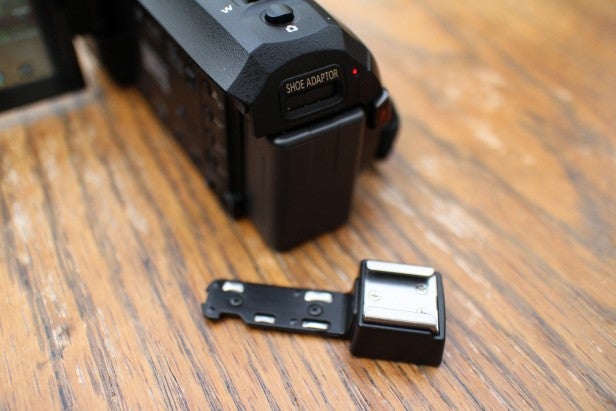 One
omission is a viewfinder, which some might prefer to the 3-inch LCD,
particularly in bright conditions. Panasonic also dropped the lens ring
we loved so much in its earlier consumer range-toppers with its 2014
models and beyond.

All is not lost, though as there’s now a control dial next to
the lens which gives you rapid access to manual focusing, white balance,
shutter and iris. A secondary menu lets you adjust the sharpness,
colour, exposure and white balance offset. So there are plenty of
adjustments available. 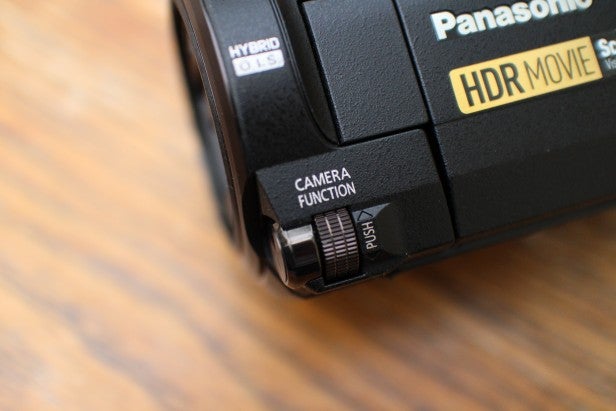 In
fact, the HC-WX970 is packed with manual settings and features, but one
of the most significant new ones is an HDR video mode. This doesn’t
work in 4K mode, so if you’re shooting in this mode, the camcorder will
automatically switch down to Full HD.

In HDR mode, more of the detail
is visible in highlights and shadows, so in this respect it’s like a
more powerful version of the earlier Intelligent Contrast. However, in
our testing it had only mildly beneficial effects. The HDR mode also
appeared to introduce a very small amount of noise in very low light. 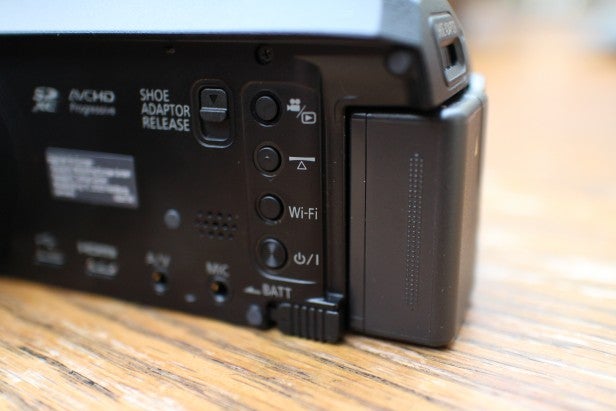 Apart
from the modes available via the dial near the lens, everything else is
accessed through the touchscreen LCD. A rotating set
of menu choices on the left-hand portion of the display provides record and zoom buttons, as well as fast access to the main
settings. There’s also a separate button to access the extensive
WiFi-enabled features, which include monitor and control of the HC-WX970
with a smartphone, home security, remote playback on a DLNA-compatible
device, and live online streaming via the USTREAM service.

Panasonic
has always provided exceptional image quality in its top-end consumer
camcorders, and the HC-WX970 is no exception. The level of detail in 4K
is the best we have seen from a sub-£1,000 camcorder.
However, the camcorder world is in a phase of considerable transition,
as changes at the high end begin to filter down.

Shooting
in 4K is all very well, but unless you’re simply hoping to future proof
your video memories, you will want the ability to watch your footage in
all its eight-megapixel glory right now. This will mean a 4K TV with
HDMI 1.4 connection is required, or 4K computer monitor. The HC-WX970
sports a 1.4-rated Micro HDMI port, with a cable supplied in the box, so
you can watch your raw footage with this combination. 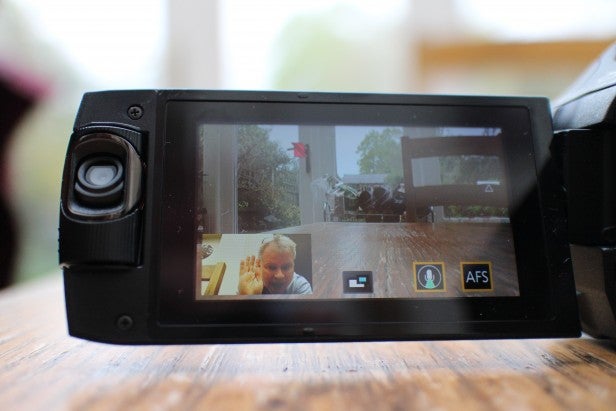 A
number of consumer-grade video editing applications have supported 4K
editing for a while, too, such as CyberLink PowerDirector. However, it’s
worth noting that even the latest version 13 of Adobe’s Premiere
Elements doesn’t. We tried CyberLink PowerDirector 12 and had no
problems editing and outputting 4K, although performance was sluggish.
The results can be seen above. We have done as little as possible to
these sample clips other than trim them, to give the best possible idea
of what raw footage looks like, although YouTube does compress footage a
lot, introducing artefacts.

Should I buy the Panasonic HC-WX970?

If
you’re feeling the need to adopt 4K video shooting early, the HC-WX970
provides Panasonic’s usual blend of excellent image quality and
comprehensive features. It may be pricey, but you get a huge amount for
the money.

We’re still waiting for that perfect 4K-shooting stills
camera/camcorder hybrid, which could be on the way with Canon’s XC10.
But that’s also going to be at least twice the price. So, for now,
Panasonic has the most capable consumer 4K camcorder on the market for
under a grand. However, make sure you take a look at Panasonic’s other new 4K camcorders before you decide to buy.

The Panasonic HC-WX970 is a great
high-end option for ‘prosumer’ 4K early adopters, with comprehensive
features and great image quality.