What is the Panasonic HC-VXF990EBK?

The HC-VXF990EBK is Panasonic’s new flagship consumer camcorder for 2016. The conventional camcorder market has contracted considerably of late, and is now about 30% smaller than it was at the end of 2013. As a result, manufacturers have been looking for ways to differentiate themselves. With Panasonic, each new range brings a host of new features, and 2016 is no different. The top resolution may still be 4K, but there are some snazzy new capabilities as well.

The HC-VXF990EBK hasn’t diverged greatly from its predecessor when it comes to the core specification. It’s still based around a 1/2.3-inch back-side illuminated CMOS  with 18.9 megapixels, although the effective area used is just 1/3.1-inch. Still images can be captured at up to 25.9 megapixels, exactly the same as the HC-WX970, and ahead of the 20.4 megapixels of the HC-X920. 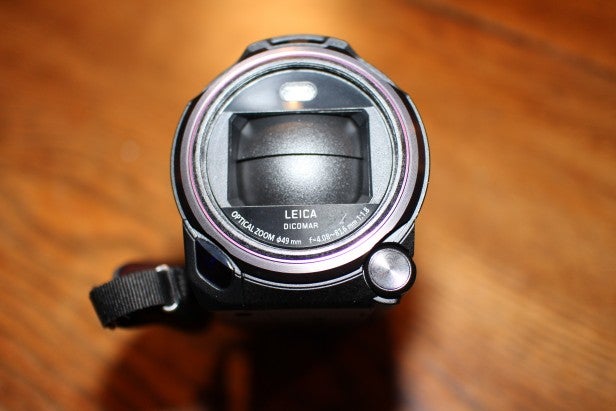 Video formats are the same as those on previous 4K models, with the latter available at 30fps and 72Mbits/sec, using MP4 format. But now there’s a cinema-friendly 24fps mode as well, which has 4K and Full HD options. There’s also Full HD available in MP4 and AVCHD, with the former available at up to 50Mbits/sec, whereas AVCHD tops out at 28Mbits/sec in 50p mode. MP4 can be captured at 720p as well, and iFrame MP4 uses a 960 x 540 resolution.

The HC-VXF990EBK has a host of new advanced shooting features, a number of which reside in an additional section of effects. The Slow and Quick Video effect puts a button on-screen that switches between high-speed and slow recording, so you can grab a quick slow-motion section dynamically between two fast ones. There’s also a regular slow-motion option, which grabs footage at high speed up to three times when you press the on-screen button.

An automated slow-zoom function is included too, because it’s quite difficult to achieve a consistently slow zoom manually. Finally, the dolly zoom creates the effect where the camera zooms in or out as it moves away or towards the subject, so the subject stays in the same position in the frame whilst the background appears to move. It’s potentially a cool effect if you can get it right, but I had real difficulty making it work.

There’s no secondary lens on the edge of the LCD panel for capturing a narrator on this model, but the wireless picture-in-picture system has been enhanced. It’s now possible to have up to three smartphones connected to the HC-VXF99EGK, and choose two of them to superimpose inside the main image. So the camcorder can become the hub of a multi-camera shoot.

A few generations ago, top-end Panasonic camcorders such as the HC-X920 offered electronic viewfinders (EVF). But the past two years has seen Panasonic remove the feature. Now, the HC-VXF990EBK heralds the return of the EVF for the top-of-the-range model. This sports 0.14-inch diagonal and 1.55 megapixels, which is a decent level of detail for an EVF. 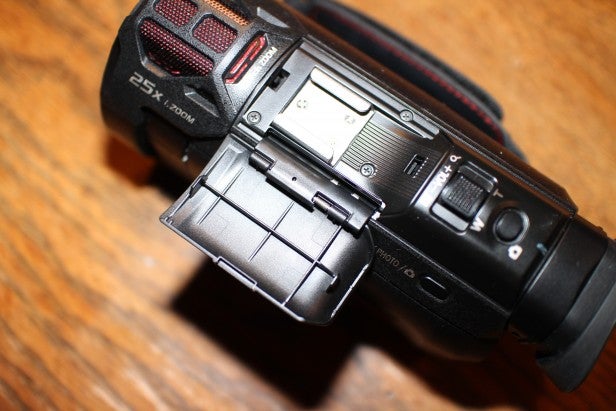 The location of the EVF means the standard-sized accessory shoe is now permanently built into the camcorder, and doesn’t require an extra bracket to be attached at the rear, as was the case with the last few generations. However, the shoe is under a flap that gets in the way a little when open.

Unfortunately, one feature that hasn’t returned to the fold is the lens ring. There’s a wheel next to the lens that performs the same function, but it doesn’t provide quite the level of intuitive control that earlier models such as the HC-X920 afforded. At least there are still mini-jacks for an external microphone and headphones, so enthusiasts will be well served in most areas.

Panasonic’s usual impressive array of manual settings is available. The intelligent auto (iA) mode leaves everything to the camera, whilst iA+ merely provides exposure and colour bias controls. Then there are 11 scene modes, a HDR option, special effects including miniature (quasi tilt-shift), 8mm movie and silent movie, plus a time-lapse option with intervals between one second and two minutes. 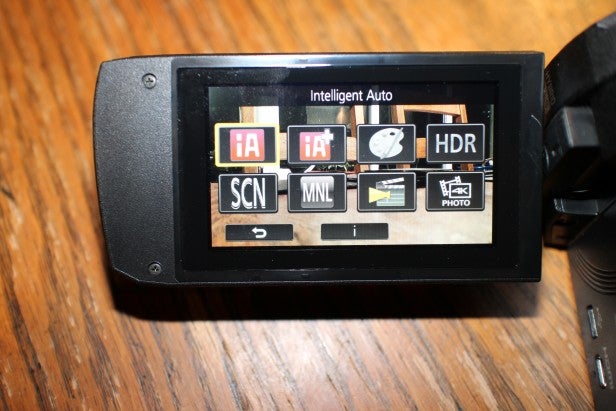 However, the manual mode reveals separate controls for focus, white balance, shutter and iris. All of these can be configured with the touchscreen, but this is also where the wheel located by the lens comes into play.

Rotating this toggles between the four options, then a press chooses one, and the wheel can then be used again to alter it. White balance options include two indoor and two outdoor presets plus manual mode. The shutter can be varied from 1/50th to 1/8,000th, and iris from f/16 to f/1.8 with up to 18dB of video gain available on top of a fully open aperture.

The HC-VXF990EBK doesn’t really progress further than last year’s top Panasonic 4K camcorders when it comes to 4K image quality. But, as consumer-grade camcorders go, these were already at the top of their game.

The footage offers plenty of detail and great colour fidelity. Low-light performance is commendable, too, with graceful introduction of grain in very poor illumination, and none at all in most everyday conditions. Panasonic’s Hybrid OIS+ is also the best image stabilisation I’ve seen in a consumer-grade camcorder.

Although 4K should by definition offer better quality than Full HD, at least in terms of detail, in reality there’s a lot more to a great image than more pixels. The HC-VXF990EBK undoubtedly produces one of the best performances I’ve seen from a sub-£1,000 consumer-grade camcorder. But I’d still like to see a larger sensor (one-inch or greater) in a true hybrid device that offers the great camcorder functions of the HC-VXF990EBK. 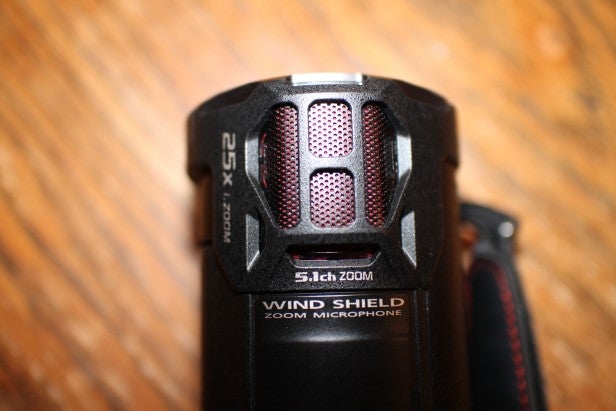 The Canon XC10 hinted at the possibilities, but its professional focus and price keep it beyond most budgets or needs. No stills camera that offers video hits the spot yet either. Even if some offer amazing video quality, they remain painful to use if you just want to whip out your camcorder and quickly grab an important family moment. So I continue to wait for the perfect hybrid.

Should I buy the Panasonic HC-VXF990EBK?

Some elaborate new features and the return of the EVF make the Panasonic HC-VXF990EBK the most capable consumer camcorder on the market, assuming a standard camcorder is what you want.