Although it’s almost business as usual at the top end of Panasonic’s 2012 camcorder range with the HC-X900, the next rung down is a little more of a departure. Although Panasonic did already offer plenty of models with a single CMOS, the HC-V700 offers an unusually large one, in a similar fashion to the high-end models from most of its competitors.

The V700 boasts a sizeable 1/2.33in sensor with a whopping 15.3MP, although only 3.55MP of these are used when shooting video. This CMOS is also described as High Sensitivity, which is Panasonic’s spin on backside illumination. So on top of the sensor being already large, it also sports this performance-enhancing technology. Curiously, only 3.55MP are used when shooting still images, too, so this won’t make a great general-purpose crossover device.

Usually, when camcorders have a large sensor the optical zoom factor is reduced, as there isn’t enough room for a long one. But the V700 still manages to offer a 26x telephoto, and there’s an iZoom option available which boosts this to 46x. This isn’t quite a digital zoom, because it doesn’t blow up the video signal and lose resolution, but instead crops into the frame, taking advantage of the excess pixels available.

Video is recorded in the relatively new AVCHD 2.0 format, so data rates now have a maximum of 28Mbits/sec, with Full HD running at 50 progressive frames per second. The V700 doesn’t have any built-in memory, instead relying on its single SDXC card slot. At the top data rate, around 5 minutes of footage can be stored per gigabyte. The other benefit of this version of AVCHD is that it has direct support for 3D, although the V700 only offers the side-by-side format, not the MVC format that maintains Full HD resolution rather than halving it.

Like all other consumer-grade Panasonic camcorders apart from the initial HDC-SDT750, however, there’s no facility to shoot 3D out of the box. Instead, you will need to purchase an optional lens adapter, in this case the new VW-CLT2. For Panasonic’s top new models, such as the HC-X900, this is a slight improvement over the first version, as it now lets you zoom, although only be a modest 1.5x. It’s also easier to attach and requires slightly less manual adjustment to calibrate. 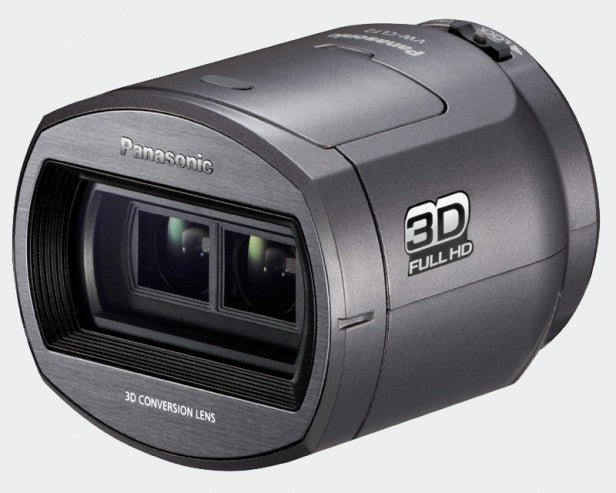 However, on the V700 you only get the easier calibration. An additional adapter is required to connect the VW-CLT2 to the V700. This is included with the VW-CLT2, but it means the attachment needs to be screwed onto the V700, and there’s no zooming facility. Even with Panasonic’s top-end models, it still won’t provide the 3D capabilities of JVC’s Everio GS-TD1.

Panasonic has been leading the way with image stabilisation over the last couple of years, and the latest range ups the ante still further. Like the HC-X900, the HC-V700 sports the new Hybrid OIS , which adds a fifth axis of smoothing, in this case roll. In our testing, Hybrid OIS proved very effective indeed both when zoomed in and zoomed out, but was particularly beneficial for handheld telephoto work. With the 46x iZoom on tap, this is a major bonus. 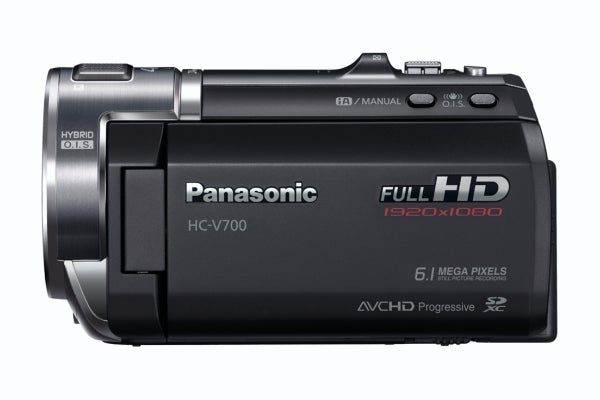 The V700 doesn’t offer one of the key features that makes Panasonic’s top premium camcorders great for the videomaking enthusiast – a lens ring. However, it still has the same level of manual control, just not quite so easily accessible. The touchscreen is exclusively used to call up these settings, but it is a generally well designed system. A series of quick menus sits on the left edge of the LCD and can be scrolled through. In manual mode, focus, white balance, iris and shutter buttons make up one menu, so you can adjust each of these features with a few screen presses. As with most other Panasonic camcorders, manually setting iris or shutter on its own acts as a priority mode, but you can also set both independently, and there’s up to 18dB of video gain available once you have physically opened the shutter as far as it will go. Alternatively, there are touch controls for focus with a single screen press.

There is almost a full complement of physical features for the serious video enthusiast, too. No accessory shoe is built into the unit itself, but a slot hidden behind a flap at the rear allows you to attach a bracket that’s included in the box. This bracket hosts a standard-sized cold accessory shoe, so you can attach a third-party video light, microphone or other peripheral. A mini-jack input is included for external microphones, and manual audio level controls are available, although these are buried in the main menu. There’s also no headphone mini-jack, which is a curious omission when all the other necessary audio-related features are included. The viewfinder found in the X900 is absent, too, but this won’t be so sorely missed by most users. 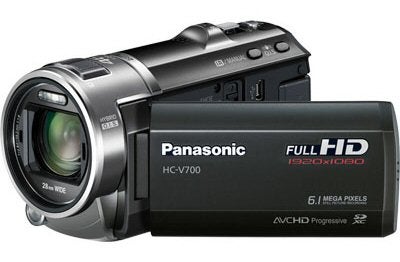 With its large, High Sensitivity sensor, the V700 manages to produce video that’s not far off Panasonic’s three-chip models. Colour and detail are both excellent, and the great image stabilisation keeps the picture clear when shooting handheld. The image in low light is just as bright, too. Our 100W ceiling light test is no match for the latest top premium camcorders. Although the V700’s footage in poor illumination doesn’t quite match the X900 for detail if you examine clips up close, it’s still very bright and colours are faithful. Overall, this is a top class performer.

Verdict
Panasonic’s HC-V700 takes a different strategy to its very top-end models, with one larger sensor rather than three slightly smaller ones. But it still produces excellent image quality. It’s lacking a couple of features compared to Panasonic’s top-end models, in particular a lens ring and heaphone jack. But plenty remains for the enthusiast, with a full set of manual controls, a microphone input and standard-sized accessory shoe. This is primarily a premium point-and-shoot camcorder, but it’s high on quality.