One area where the HC-V550 differentiates itself from the budget crowd is by offering WiFi, which Panasonic was late to include in its camcorders. But now its abilities in this area are some of the best around, with a comprehensive range of functions available. There’s a control app for iOS and Android, home and baby monitoring functions, plus you can also set the camcorder up as a wireless streaming DLNA device. Best of all, you can hook the HC-V550 up to your existing network and stream live to the Web via the USTREAM service. 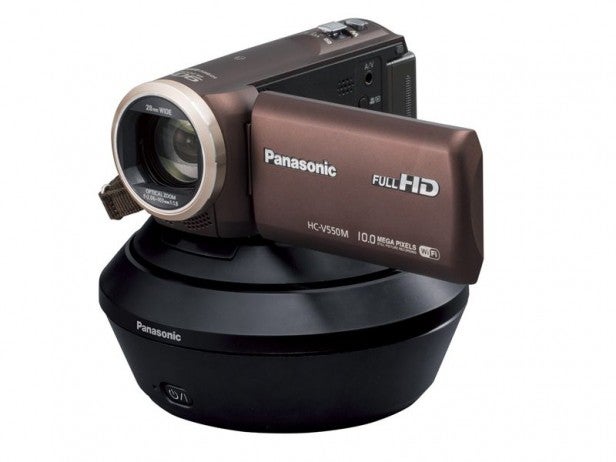 However, the biggest addition with the HC-V550 is the bundling of the VW-CTR1 remote pan tilt cradle accessory, which brings pan-tilt-zoom facilities to regular camcorders. This is a highly unusual capability to offer, although Panasonic already has a considerable track record offering industrial pan-tilt-zoom network cameras for surveillance use, so the technology has presumably been borrowed from here.

The VW-CTR1 can be mains powered or use a pair of AA batteries, but it doesn’t have a rechargeable pack. To use the VW-CTR1, the camcorder is mounted on a plate and slotted into the cradle. It is then connected to the camcorder via USB. The camcorder will then detect a USB device, and you can tell it that the pan tilt cradle has been attached using the touch screen menu. After this, you can choose a variety of control options.

The VW-CTR1 can cover a party, by panning around the action sporadically, or it can track a moving object automatically. Alternatively, you can control it remotely using the smartphone app, which we found the most satisfying scenario. The automatic options are a little hit or miss, though. The VW-CTR1 is available separately for £159.99, so isn’t an enormously pricey addition to other compatible camcorders in Panasonic’s range.

This isn’t a camcorder for the enthusiast, however, despite its manual controls. There is no accessory shoe, and no minijacks are available for headphones or an external microphone, although there is one for analog video output, as well as mini HDMI. 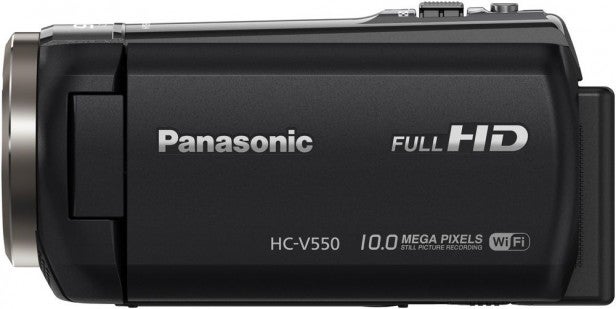 With an identical CMOS to the HC-V520, the HC-V550 has almost identical performance to its predecessor. We couldn’t spot any significant difference when shooting in sunlight. The image has good colour fidelity and sharp detail, providing plenty of clarity at maximum optical zoom. The small sensor means the depth of field is quite large, but this is par for the course for camcorders at this level.

In low light, the HC-V550 manages to maintain image brightness and colour down to a commendable level, but there is much more grain visible than with the HC-W850, as we would expect given the HC-V550’s smaller sensor. Image quality is still good, and this camera will be up to capturing those all-important indoor events, but we have seen better at this price, for example from JVC GZ-GX1, which was still available to buy at the time of writing. 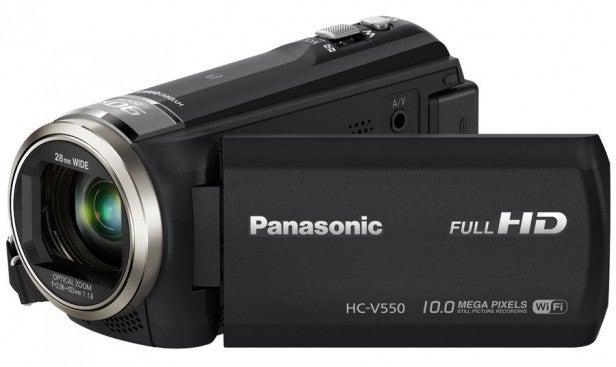 Should I buy the Panasonic HC-V550?

The Panasonic HC-V550 is a decent mid-range camcorder, with an extensive feature set, which can be purchased on its own for £379.99. But £469.99 with the cradle included is an even better deal.

If you do want a camcorder that can double as a pan-tilt-zoom surveillance device, the VW-CTR1 compatibility will be a unique capability, unless you purchase one of Panasonic’s other new camcorders, such as the Panasonic HC-W850, V750 or V250, and add it on as an accessory.

The Panasonic HC-V550 puts itself above the mid-range competition with the inclusion of a remote pan-tilt-zoom cradle.