Panasonic regularly graces the top of our Recommended list for premium camcorders, but its budget models haven’t been quite so all conquering. They’re good, but not usually priced as keenly as their competitors. The Panasonic HC-V500 arrives with a street price somewhere between £250 and £300, which on the face of it puts this model in the same category as predecessors. But this time it does have a few features that justify that extra cost and place it ahead of budget devices costing around £200.

The base specification is not particularly exciting. There’s a small 1/5.8in CMOS with just 1.5Mpixels – not enough to match the resolution of the Full HD format it shoots. However, this is what Panasonic calls a High Sensitivity sensor, which essentially means it’s a back-side illuminated CMOS, providing potential benefits when shooting in low light.

Footage can be grabbed at up to 1080p (Full HD with 50 progressive frames per second) with a bitrate of 28Mbits/sec, and there’s a discrete button to enable this mode. Unlike the previous generation, the 50p mode doesn’t switch to MP4 but still records an AVCHD MTS file. However, strangely the top non-50p recording mode runs at just 17Mbits/sec, not the 24Mbits/sec possible from the AVCHD format. Footage is recorded to SD memory card, with around 1.25 hours of footage fitting on a 16GB at the top 28Mbits/sec data rate. 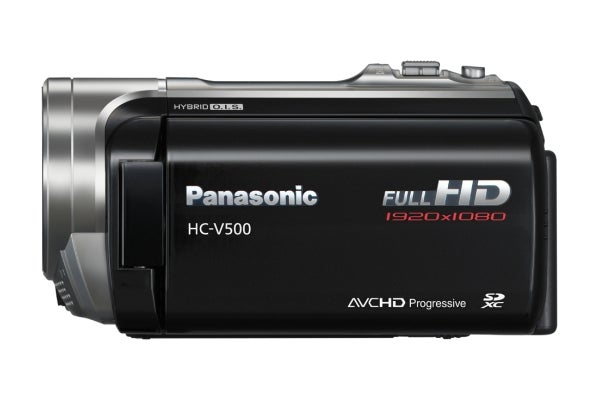 However, where the V500 does place itself a cut above the budget level is in image stabilisation. Most camcorders costing around the £250 mark or less will rely on an electronic form of image stabilisation. But Panasonic has endowed the V500 with its latest Hybrid OIS system, which compensates for roll as well as movement in the X and Y axis. In Panasonic’s higher-end camcorders, this is the most effective image stabilisation system currently on the market, and it’s equally good in the V500.

The zoom factor is pretty commendable, too. The lens itself provides a
38x factor, but this translates to a 42x optical zoom. Panasonic has
also enabled an iZoom, which boosts the factor to 50x. This presumably
crops into the sensor slightly as with similar provisions elsewhere,
rather than magnifying the image electronically as with digital zooms.
However, this technique works best when the sensor has surplus pixels,
and the V500’s CMOS already lacks the native resolution for Full HD. So
we’re not convinced the iZoom is such a useful feature here, and the
real 42x optical zoom is already sufficient on its own. 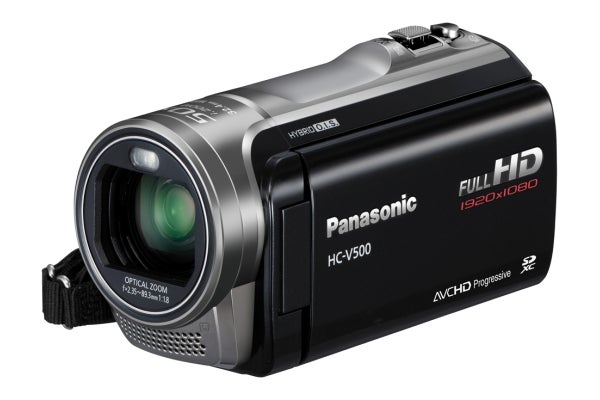 As
this is a budget camcorder, it’s no surprise that the V500 lacks
enthusiast features like an accessory shoe or minijacks for headphones
or an external microphone. There are also only discrete buttons for a
few major options, like switching to manual from Intelligent Auto,
enabling the image stabilisation system, and choosing the 1080/50p
recording setting. But it does have more user-configurable settings than
you would expect within the touch-screen menu. Even in Intelligent Auto
(iA) mode, there’s a full range of scene modes available, including all
the usual suspects, although iA does a decent job of detecting
conditions and selecting scene modes automatically.

There are a few useful options to be found in the quick menu on the left of the LCD as well. Software buttons are available for operating the zoom and triggering record, ideally positioned for two-handed camcorder operation. You can toggle the Pre-Rec function and video light, enable the stabilisation lock and AF tracking, and operate a touch-controlled zoom. We would like to see tele macro and backlight compensation added to the list (of which more later), but overall there’s some pretty useful options here. 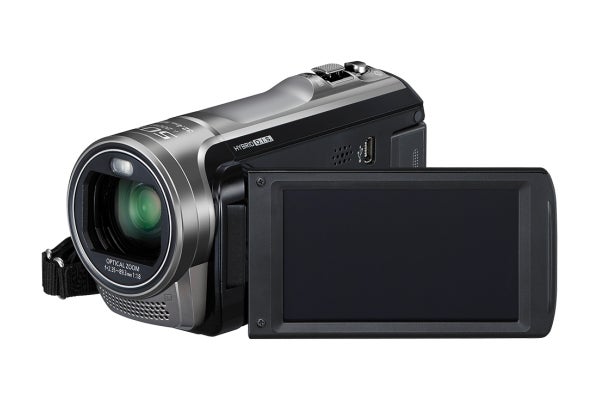 Switch to manual mode and an even more comprehensive range of settings becomes available. An additional quick menu page gives access to manual focusing, white balance settings, shutter speed and iris. The manual focusing is a little fiddly with the touchscreen, despite the assist mode that fringes areas in focus with blue, but white balancing options include two indoor and two outdoor presets, plus fully manual as well as automatic modes. You can adjust the shutter from 1/50th to 1/8000th, and the iris from F16 to F1.8, with up to 18dB of video gain available on top of a fully open aperture. These are not features you normally expect in a sub-£300 camcorder.

Particularly surprising to see are the picture adjustments, which let
you set sharpness, colour, exposure and white balance offset. There’s a
Digital Cinema Colour mode, which enables high dynamic range x.v.Colour
for use with Panasonic VIERA TVs. You can even adjust the microphone
levels manually, despite the lack of connecitivity for attaching an
external source. There’s a zoom mic facility, and a reasonably effective
wind noise cancellation system. However, although essentials like
backlight compensation and tele macro are present and correct, they are
only available in the full menu. These should really be located in the
quick menu as well, as mentioned earlier. 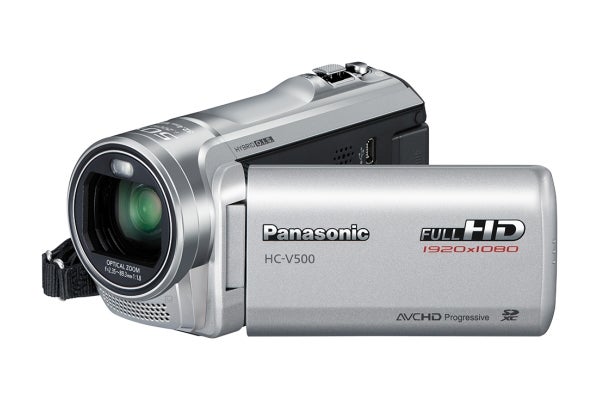 Image
quality is pretty decent for a camcorder this price. In good lighting,
colour fidelity is very good and contrast is particularly impressive,
with detail visible in shadows and with highlights not blowing out. The
V500 can’t quite compete with its premium siblings such as the
HC-X900 for detail, but it’s not bad for a third of the price. The
High Sensitivity sensor proves its worth in low light, too. Performance
isn’t significantly better than our favourite budget models, but it’s
far better than sub-£300 camcorders of a few years ago. The HC-V500
should be more than up to grabbing family moments in dimly lit houses.

Verdict
The
HC-V500 is another camcorder from Panasonic that doesn’t quite hit the
price mark for a true budget model. If you’re really tight on cash, we
would still recommend a more keenly priced alternative such as
JVC’s HD Everio GZ-E205. But if you have a little more to spend, the
HC-V500 has a more generous array of configuration options and superior
image stabilisation, making it worth the extra money.