An opening look at the Panasonic FX750

Panasonic undoubtedly now sees OLED rather than LCD as the ‘go to’ technology for its premium TVs.

That’s not to say that the brand has abandoned LED LCD. On the contrary, the new Panasonic FX750 series (FX780 outside the UK) is as innovative as it is beautiful. It combines a striking new design with plenty of promising new picture technology. This could be a serious contender for TV fans who can’t afford OLED.

The Panasonic FX750 will be available at screen sizes of 49, 55, 65 and 75 inches. I got a good look at this model at Panasonic’s product convention in Palma, Mallorca – here are my initial impressions. 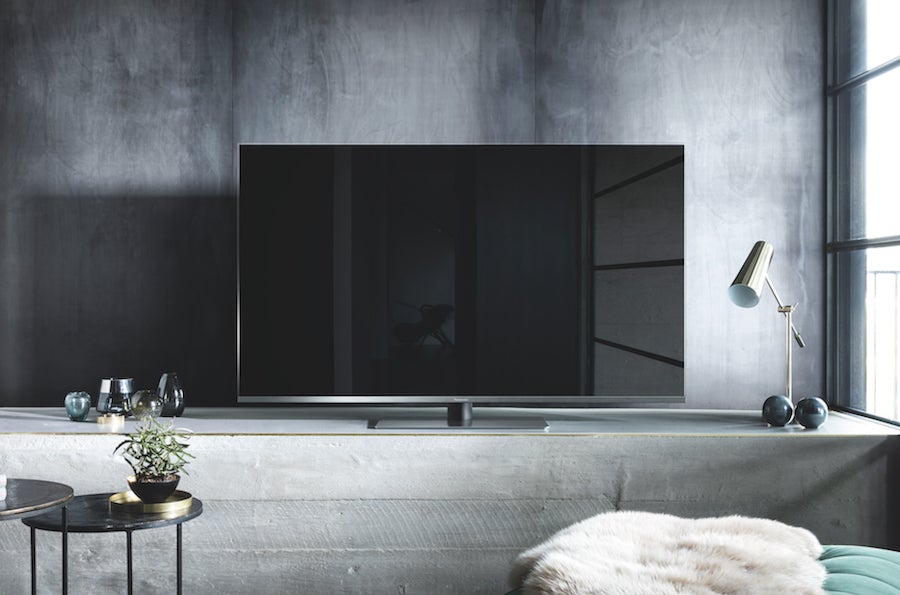 All four models in the FX750 range combine native 4K resolutions with HDR10, HDR10+ and HLG flavours of high dynamic range support. They use edge LED lighting supported by local dimming, where zones of the LEDs can output different amounts of light.

Where the FX750s stand apart from rival edge-lit LCD TVs is with their extra ‘shuttering’ system behind the pixels. This provides a substantial extra level of control over where and how the light passes through the liquid crystals.

This so-called ‘digitally enhanced local dimming’ system is also found on Panasonic’s new step-down FX740 and FX700 LCD TV series. However, the FX750 version is claimed to be far more powerful. Not least because unlike the FX740s, the FX750s’ pictures are powered by the same new HCX video processing engine also found in Panasonic’s 2018 OLED TVs.

The FX750s also score over the FX740s with a brighter, more efficient LCD panel; by supporting native 100Hz native playback; and by carrying a Freesat tuner alongside the Freeview HD one. 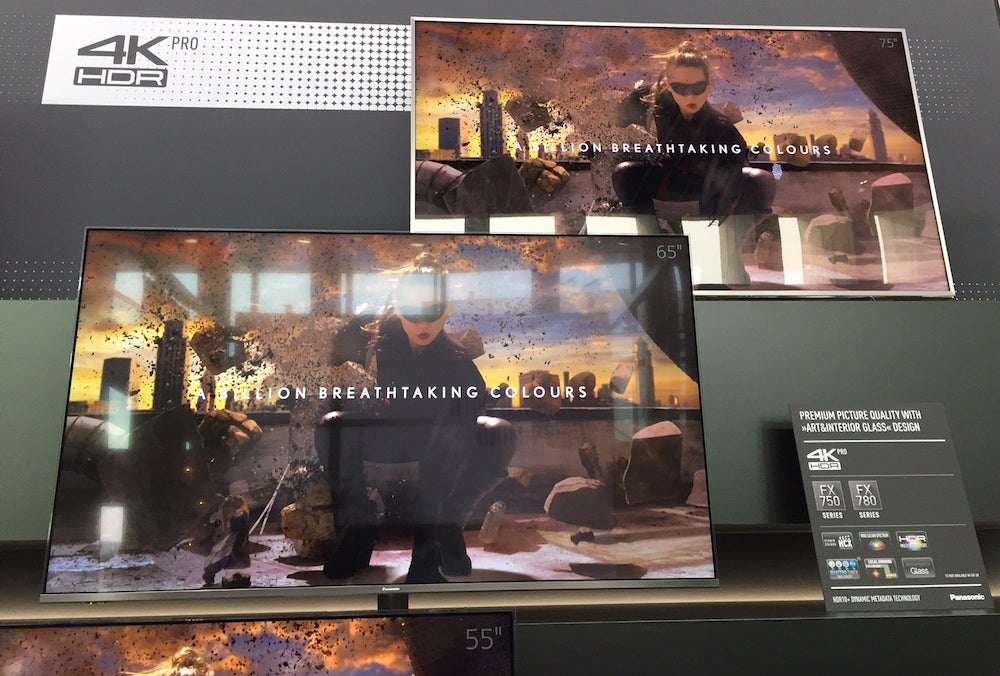 The FX750s numerous technical advantages delivered clear picture quality advantages over the FX740s. Before I get into those, though, we need to talk about the FX750s’ design.

Note that for some reason the 75-inch FX750 doesn’t sport the glass-based design. Instead it uses a more traditional brushed silver frame pretty reminiscent of last year’s EX750 series.

The first thing that struck me about the FX750s’ pictures was how much richer and more dynamic their colours looked than those of neighbouring FX740s.

During a shot containing a vibrant sunset, for instance, the FX750 delivered much more intensity in the red and orange sunset hues. There was also more finesse in the range of tones visible in this sunset picture area, as well as more tonal detail in the sunset’s very brightest peaks.

There’s more subtle shading and detail in the brightest parts of other shots too, such as white clouds against a rich blue sky.
This reduced ‘clipping’ versus the FX740 is almost certainly down to the FX750s’ combination of a brighter panel and the extra processing prowess delivered by the new HCX engine.

Strangely, while the FX750s handled the brightest parts of its pictures much better than the FX740s, under the glare of Panasonic’s show lights only the pictures of the 75-inch model looked significantly brighter overall than those of the FX740s.

When you also factor in the much more refined and three-dimensional look of the FX750s pictures, though, it serves as an important reminder that it’s not always just how much raw brightness a TV pumps out that counts.

The way the FX750 can apparently control its light down to a very local level indeed surely has to be down to its upgraded digitally enhanced local dimming system.

The quality of the FX750’s light control isn’t just evident in bright areas. There’s also more shadow detailing and subtle colour information in very dark demo reel content, such as a woman’s black leather cat suit, and some dark period drama outfits.
This enhanced dark area refinement is surprising given that the 49, 55 and 65-inch FX750s use IPS LCD screens.

Experience shows that while IPS-type LCD screens support wider viewing angles than their VA-type rivals, they also suffer with inferior contrast. Yet the FX750 shows levels of subtle detail and colour information in dark areas I’d never normally expect to see on an IPS panel. 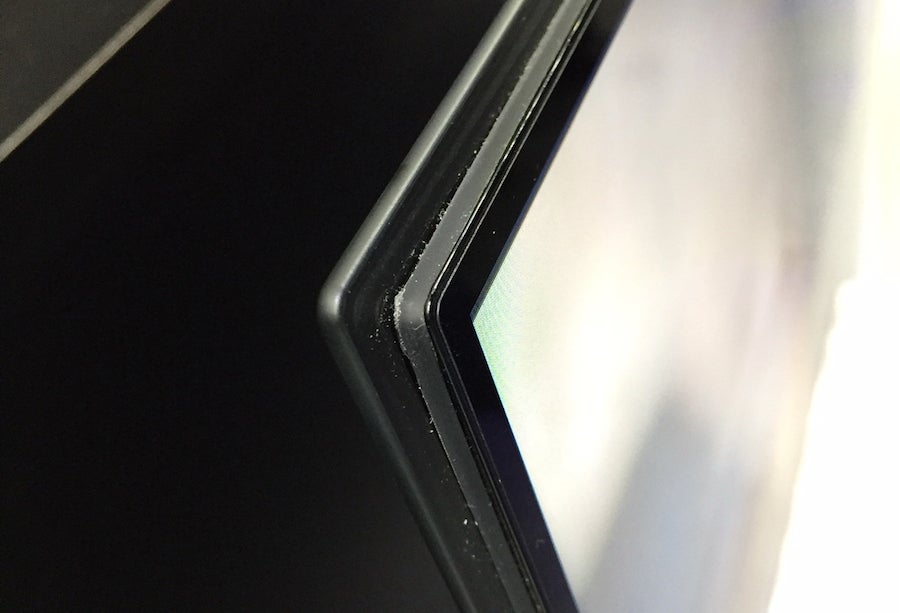 I’ll need to see an FX750 under much more controlled light conditions than I could at Panasonic’s 2018 product convention before I can comment fully on just how good a job its unique backlight system does of combatting IPS’s innate contrast problems. But at the very least it seems there’s something interesting going on.

Note that the 75-inch FX750 uses a VA panel, resulting in markedly different image characteristics. Its images looked significantly brighter than those of the IPS screens, and enjoyed a greater sense of contrast during shots containing a mix of bright and dark content.

On the downside, its screen was much more prone to reflections than the smaller IPS models. Also, inevitably, its VA picture lost contrast and colour saturation when viewed from an angle, while the IPS screens’ images remained largely unaffected.

Wrapping up the FX750’s improvements over the FX740s next door are slightly cleaner motion handling (especially in terms of unwanted processing side effects), and a generally slightly sharper look to the demo reel’s 4K images.

Before we all start thinking the FX750 is about to completely rewriting the LCD rule book, I should say that one or two shots looked just about grey enough even in the bright show room to make me think IPS’s inherent flaws haven’t been completely overcome.

In that respect, I’m genuinely hopeful that the FX750 range’s light management cleverness and uncompromising processing prowess will make it a truly exciting mid-range LCD TV. 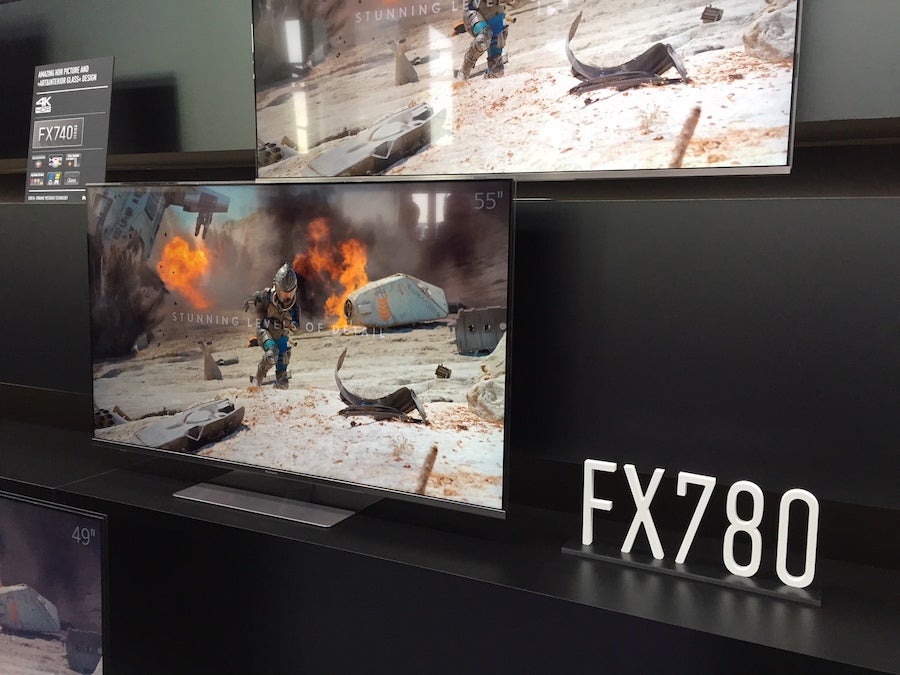 No OLED? No problem. It looks like the Panasonic FX750 addresses many of the problems typically associated with LED LCD TVs, which will be good for those looking to save a bit of cash. Of course, we’ll need to get one in for a proper test in better conditions and compare it similarly priced models. We’ll get pricing details nearer the release date in April.