What is the Panasonic Lumix FT7?

The Lumix FT7 is Panasonic’s latest ruggedised compact camera and replaces the now discontinued Lumix FT5. It comes with a new 20.4-megapixel sensor and the build quality to withstand treatment that would turn most point-and-shoot models into useless lumps of metal.

In addition to being waterproof, freeze-proof, dust-proof, pressure-proof and shock-proof, it also comes with a built-in compass and altimeter for tracking the camera’s outdoors adventures, as well as a new electronic viewfinder, 4.6x zoom lens and optical image stabilisation.

This makes it ones of the most capable rugged compacts you can buy, although it lacks the Olympus TG-5‘s option to shoot in Raw and its rival’s brighter f/2.8 lens.

Most ruggedised compacts are a little heftier than their non-rugged brethren, but the first thing you notice about the FT7 is that it is significantly beefier than the average point-and-shoot.

You’ll need deep (and wide) pockets if you want to carry this thing in anything other than a bag. On the plus side, it’s hard to misplace, particularly if you choose it in this blazing burnt orange metallic finish (it also comes in rather more subdued black or blue colour ways). The FT7 is also fairly lightweight at 319g, and easy to carry in your hands thanks to the included wrist-strap, plus a textured grip for your right hand. 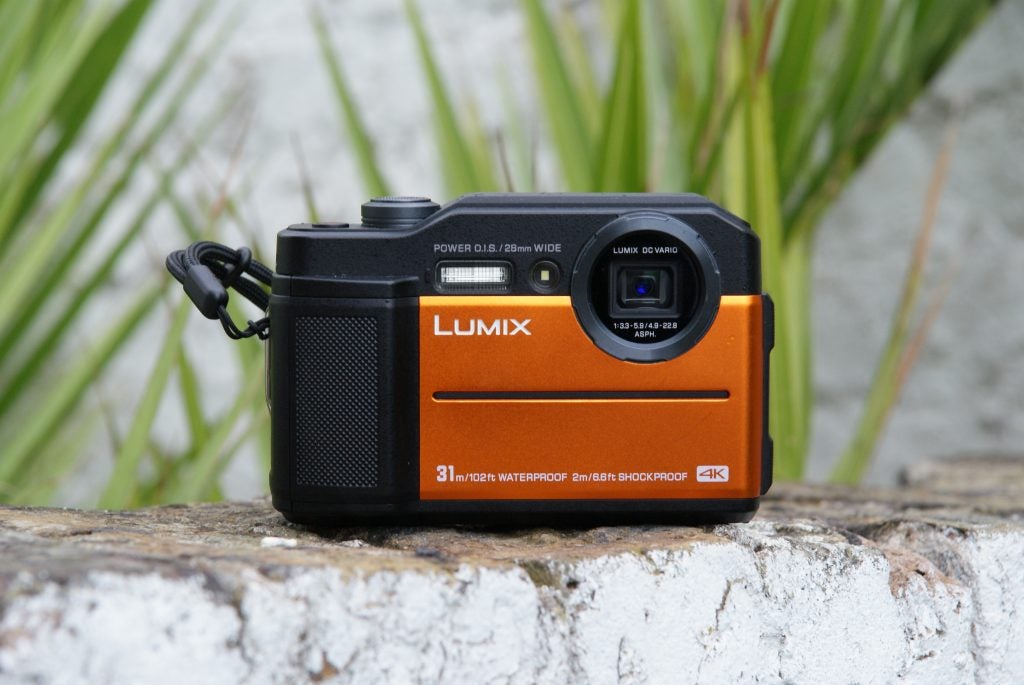 Much of its size, we presume, is a consequence of Panasonic’s design choices. For starters, there needed to be space for its electronic viewfinder, and the amount of protection from the elements, pressure and shock might well mean some added padding all around.

This compact is dive-proof to 31m, which is deeper (just) than any of the other waterproof compacts we’ve reviewed recently (the Nikon W300 comes very close, working to 30m). It’s also shock-proof against drops of 1.8m, freeze-proof to -10ºC and pressure resistant to 100kg, all of which are pretty much in line with other rugged compacts. A dual-locked, moisture- and dust-sealed compartment on the side keeps the connectors, battery and SD card slot protected.

Outdoorsy types will appreciate the built-in compass and altimeter, info from which can be embedded in your images’ EXIF data. There’s no built-in GPS (something you will find on the rival Olympus TG-5), but you can tether to a smartphone via Wi-Fi to geotag shots.

The electronic viewfinder is potentially a big selling point for the FT7, as they are far from the norm on this type of camera.

It’s dinky, at just 0.2 inches in size, and a little dim and lacking in contrast, but it does beat the screen for composing a shot when you’re standing in bright sunshine. We’d have loved Panasonic to include a digital level to help keep images straight, though; it’s something the company features in other cameras, so leaving it out here is a little puzzling. 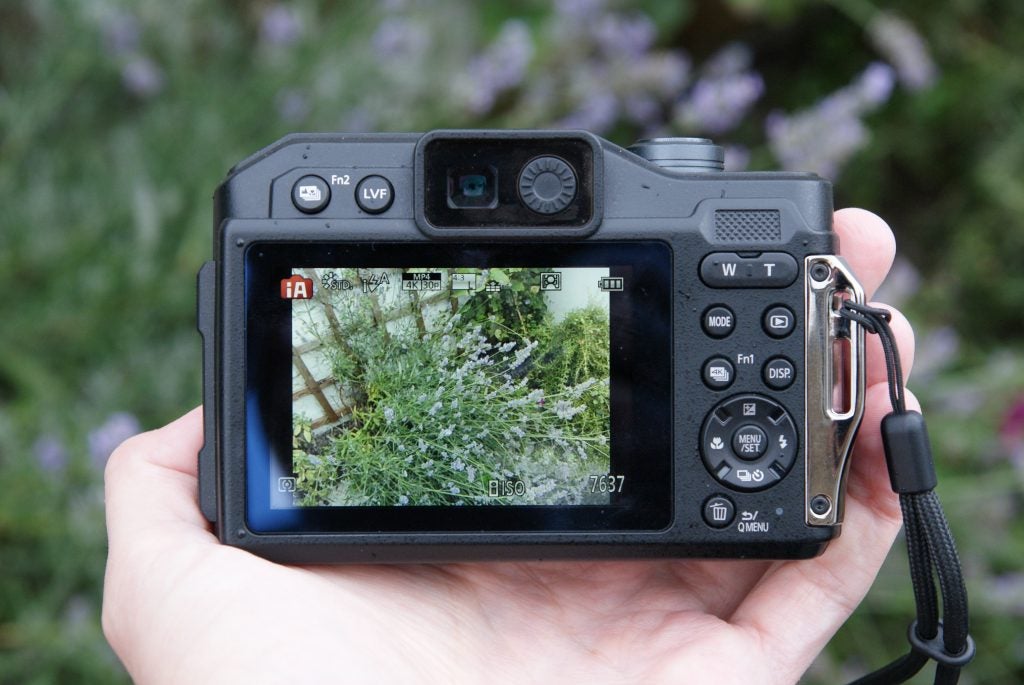 You switch between the viewfinder and the LCD screen using a button, which can be a bit fiddly at times (sadly there’s no eye-sensor, to help flip between the two automatically), and you’ll probably be doing so a lot, as the EVF’s small size means you’ll likely want to use the screen for reviewing your images and changing settings in the menus.

The screen has a reasonable resolution of 1040k dots, or 720 x 480, which provides enough detail to adequately review photos and videos on a 3-inch display.

The FT7’s size is a potential bonus for handling – particularly for the larger-handed photographer. There’s plenty to get a firm grip on here without blocking the screen or lens, and the textured shutter button, hand grip and thumb rest mean it will feel secure in your mitts even when wet.

Some of the buttons are a tad small, though, and the placement of the video stop/start control next to the similarly-sized power button means you may accidentally turn off the camera when you want to capture a clip (or vice versa). The shooting mode and zoom are controlled by a button and a thumb-operated rocker respectively, which work well enough, but we much prefer the mode dial and zoom lever of the Olympus Tough TG-5, which are more tactile, intuitive and quicker to use. 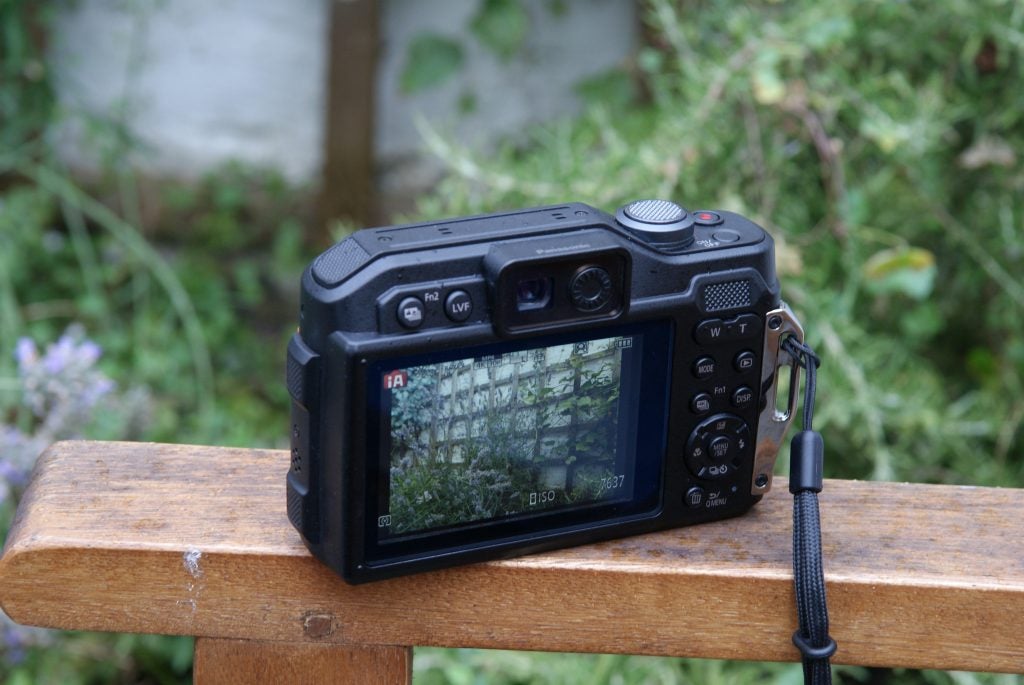 The autofocus system features decent face detection and tracking autofocus modes, as well as 49-area, 1-area and spot modes. It’s usually quick and accurate in decent lighting but we did find it struggling to focus on more than one occasion, appearing to detect something close to the camera when there was nothing there.

The camera’s internal zoom offers a nice bit of reach. There’s 4.6x optical, offering the equivalent of a 28-120mm zoom on a 35mm camera, plus a further ‘Intelligent Zoom’ that extends the range to the equivalent of 256mm. The Intelligent Zoom is a digital zoom to all intents and purposes, but performs some algorithmic trickery designed to mitigate the image quality loss.

The camera’s 20.4-megapixel MOS sensor functions very well in good lighting, serving up sharp, clean, detailed and natural-looking JPEGs. There’s no option to shoot in Raw, though, which might surprise given this is up against the Raw-equipped Olympus TG-5.

We weren’t convinced by the quality of the Intelligent Zoom shots, which are clearly less detailed than those taken within the 28-120mm range, but built-in optical image stabilisation means you can shoot at 120mm without worrying too much about blurry results. In other words, you can use the full optical zoom range handheld and get sharp shots.

Like many ruggedised compacts, the Panasonic FT7 works particularly well for macro shooting as it’s able to capture a lot of detail from objects close to the lens. We think that’s nicely illustrated by our shot of the fly (above), which keeps the background blurred but the fly and the leaf it’s resting on in sharp, detailed focus.

Despite the lens’ small maximum aperture (f/3.3 at its widest zoom, f/5.9 at 120mm) and the camera’s 1/2.3-inch sensor, you can capture usable images in low light. Take a look at the background of photo of the beer on the counter above, which shows some grain and noise but nothing too horrible. Still, we feel like the Olympus TG-5’s f/2.8 lens and larger sensor pixels gives it a slight but valuable edge when light is limited.

The FT7 comes with 4K video recording at 30fps, and while that’s always an attention-grabber on the box, the footage itself is not particularly noteworthy. It’s Ultra HD technically, yes – but noise and compression play a part in limiting its detail; in short, you can tell it was recorded by a compact camera and not on a DSLR or mirrorless system camera. 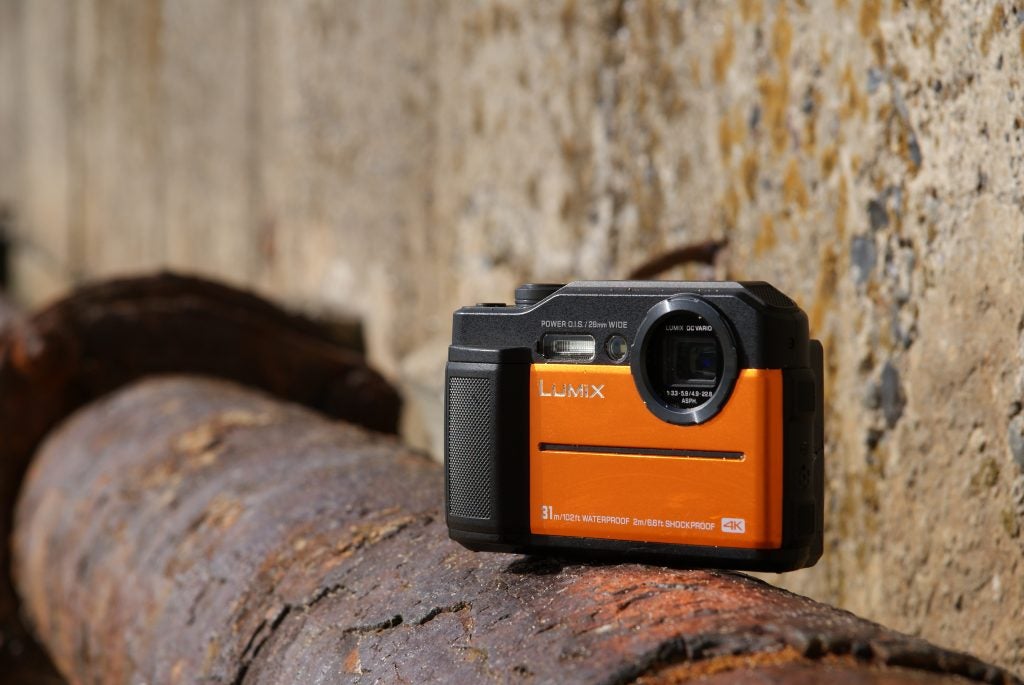 The 1080p at 60fps option is perhaps a better bet, with that faster frame rate giving your footage smoother motion, while a 720p/100fps option plays footage back at 25fps for a smooth slow motion effect (which suffers from overall softness, even if it’s quite fun to shoot).

Finally, the FT7 offers Panasonic’s 4K Photo shooting options, which limit stills to 4K resolution (around eight megapixels) but allow them to be shot at 30fps burst speed, or in a ‘post focus’ burst that allows you to choose the focus point after taking a shot. The quality isn’t bad, and they’re handy in certain circumstances.

Why buy the Panasonic Lumix FT7?

The Olympus Tough TG-5 previously set the standard for image quality in the rugged waterproof compact camera realm, and while Panasonic has made a valiant effort here, we’d still opt for the Olympus for pure image quality due to its f/2.8 aperture, more sensitive image sensor and Raw shooting option.

However, the Panasonic FT7 can go deeper in the water and its electronic viewfinder is very handy on bright, sunny days, all while offering image quality that is not too far behind. If you’re a scuba diver or planning on shooting a lot in a sunny location, those factors could sway it for you.

One of the best waterproof compacts around, if not as all-round impressive as the Olympus TG-5