Panasonic has made an intriguing entry into the smartphone market here in the UK, coming in with two slim, styish and… waterproof Android handsets. We got hands on with the new 5in version to see if its an approach that has worked.

The first thing to note about the Panasonic Eluga Power on both the hardware and software front is that it’s not actually finished. In particular Panasonic representatives were keen to point out the back may yet have a change of finish. We’re intrigued to know what the eventual finish will be because the matt black plastic on the demo unit is quite nice. 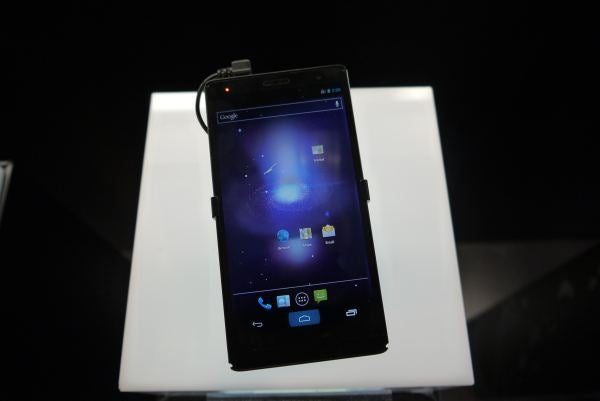 The rest of the handset also feels reasonably nice in hand. The sides are nicely curved and despite the screen size it fits in the hand quite easily. It certainly isn’t perfect though. There are odd gaps between the end caps and the rest of the body and the corners are rather sharp. Both are clearly design decisions rather than manufacturing issues but we’re not sure we agree with them. As ever, the front is entirely dominated by a slab of glass, inset into which are the screen, trio of touch buttons and front facing camera. 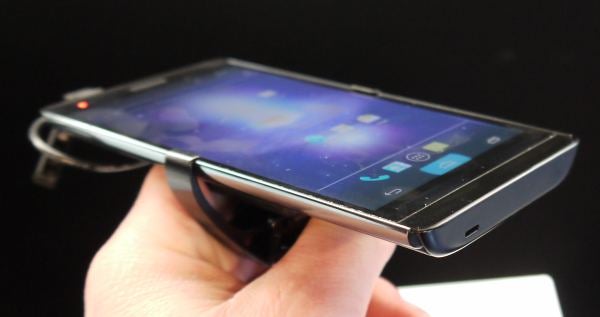 One design decision we really applaud, however, is the location of the power and volume buttons. Situated on the back alongside the camera, they fall perfectly underneath your index finger. They’re better placed for lefthand holding than right but both do work, and the power button in particular is considerably easier to reach than when on the top edge. Despite the buttons being small they’re easy to find by feel alone, unlike those on the Motorola Xoom 2 tablets. 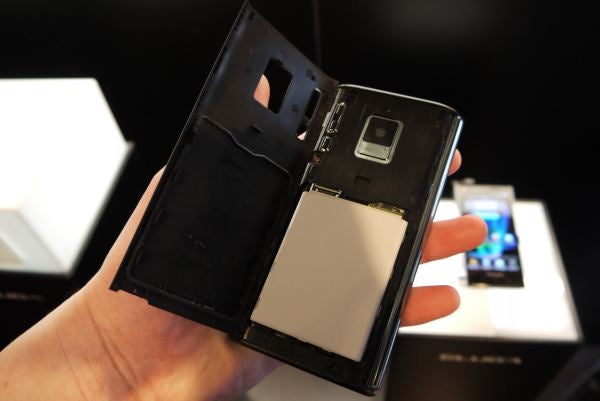 Pop the hood and as well as the 1800mAh battery you can access the SIM slot and microSD slot. Up to 32GB sized cards can be added to bolster the 8GB onboard.

Part of the waterproofing can be seen on the underside of the lid where a line of rubber encircles the battery compartment. We’re yet to get the full low down on how the whole phone manages to keep out water even when submerged but with an IP57 certificate it clear does it somehow. Suffice to say, we can’t wait to put these claims to the test when we get the handset in for a full review.

The screen is an IPS LCD panel with the customary 720 x 1280 pixel resolution that most premium Androids are now shipping with. It’s bright, colourful and super sharp – everything we’ve come to expect from a top-end phone announced at this year’s MWC. 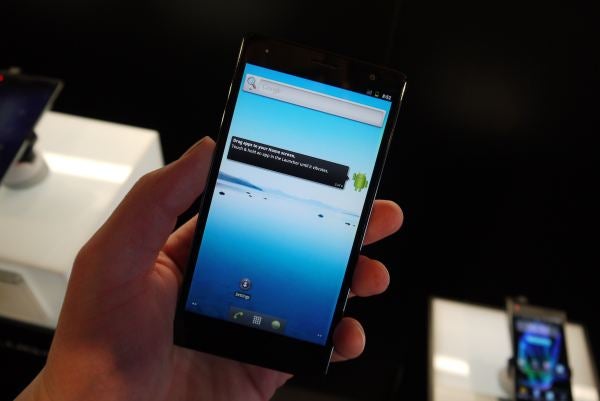 Inside the handset is a dual-core 1.5GHz processor which seemed to keep the phone running briskly. However, as with the hardware the software wasn’t fully optimised so it was difficult to judge performance inbetween crashes and bizarre errors – the camera app being stuck in some kind of inverted colour mode was a particular highlight. 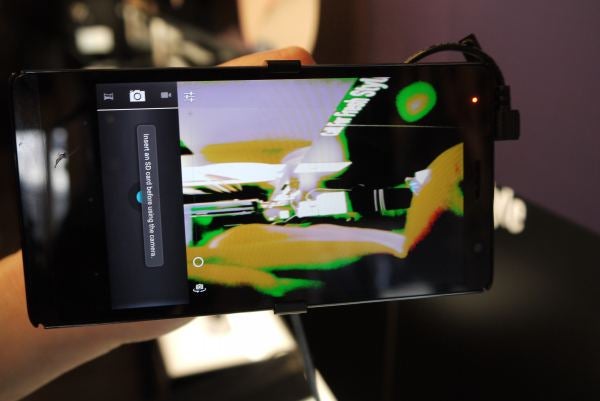 Overall, the Panasonic Eluga Power leaves us with a positive first impression. Its lack of a quad core processor and less than standout design means it may not shoot straight to the top of our wishlist but with a few nice ergonomics touches and of course that IP57 waterproof and dustproof rating, it could be a truly practical modern smartphone for those that like to get out and about.