While the Panasonic DP-UB450’s performance is inevitably compromised next to more expensive models, its support for both HDR10+ and Dolby Vision means it still holds up well versus similarly priced rivals. It’s certainly a contender if you have, or intend to purchase, a TV that can take advantage of that all-important dual format HDR support.

The Panasonic DP-UB450 is a super-affordable 4K Blu-ray player with a consumer-friendly ace up its sleeve: support for both the HDR10+ and Dolby Vision “dynamic” HDR formats.

No other sub-£200 player offers support for both 4K Blu-ray world’s premium formats, potentially making the UB450 a major AV hero. Provided, of course, that including such support for so little money hasn’t led to compromises elsewhere.

The UB450 isn’t much of a looker. It’s small compared with high-end units, suggesting significant compromises with the deck’s internal layout and components.

Build quality is nothing to write home about, either. It’s light, and the metal chassis feels thin. Add in a flair-free rectangular shape, alleviated only by a matte-black plastic fascia, and you have a box that looks more suitable for a university science lab than a living room. 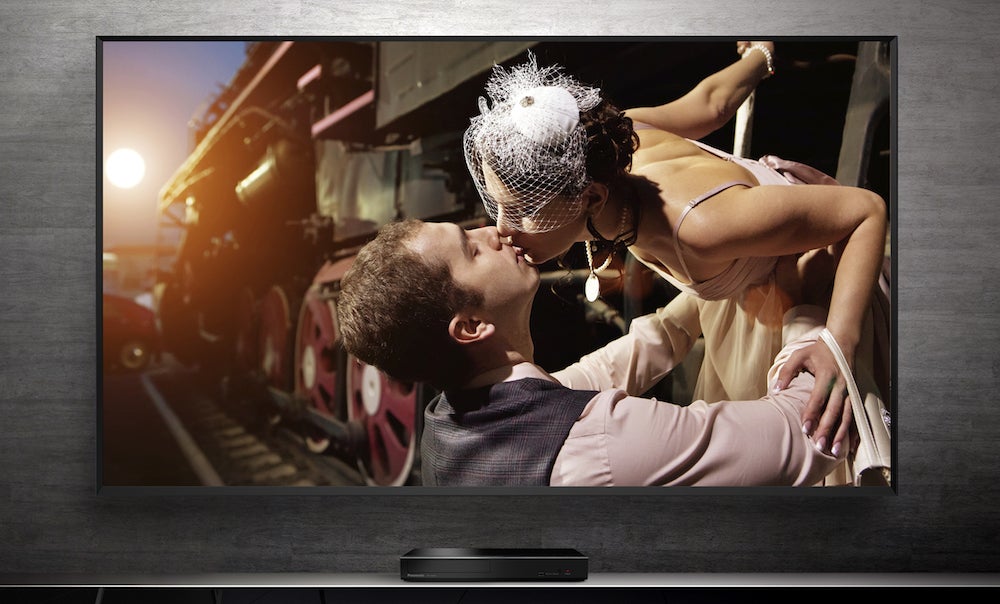 The Panasonic UB450 – it’s tucked away under a massive TV

A pair of plasticky buttons along the top edge provide simple on/off and eject functions, while the monotony of the fascia is broken only by the outline of a disc tray on the left side, and a front-mounted USB port.

Even the remote control is a step down from the usual Panasonic handsets. It’s smaller, thus causing button crowding, and there’s no backlighting, making it tricky to use in a dark home-cinema room. The buttons themselves are a bit rubbery, too, and overall build quality is very plasticky.

The Panasonic DP-UB450’s key selling point is that it costs just £179 yet can play both of the Dolby Vision and HDR10+ “active” HDR formats now found on many 4K Blu-ray discs. This makes it by far the cheapest 4K Blu-ray player to offer such support.

Why is this a big deal? Unlike the “core” HDR10 format supported by all HDR TVs and 4K Blu-ray players, HDR10+ and Dolby Vision provide compatible TVs with extra scene-by-scene information to help them deliver better pictures.

So only a 4K Blu-Ray player such as the UB450 that can play both formats can guarantee that you get the best quality from any 4K Blu-ray you buy, regardless of which HDR format the disc carries.

Being able to step above AV industry politics for just £179 in this way is a massive attraction. Although remember, you’ll also need a TV that supports both HDR10+ and Dolby Vision to take full advantage of the UB450’s format-neutral charms.

At the time of writing, in the UK, only Panasonic and Philips TVs offer such dual format compatibility.

The Panasonic DP-UB450 lets you toggle each dynamic HDR format on or off through its menus. This is handy for those occasions you get a 4K Blu-ray such as Alita: Battle Angel, which carries both the HDR10+ and Dolby Vision formats, for choosing which format you’d rather watch the title in.

For me, in this situation most titles will benefit from the Dolby Vision option, which adds 12-bit colour mastering in addition to the extra scene-by-scene data feature it shares with HDR10+.

While you can opt to turn HDR10+ and Dolby Vision on or off, if you turn both options on, the Panasonic DP-UB450 will automatically determine which format any 4K Blu-ray you play carries. You don’t need to manually turn the settings on and off depending on what format(s) – HDR10, HDR10+ or Dolby Vision – a particular disc supports.

Given that the UB450 sports the same HDR10+ and Dolby Vision support as Panasonic’s £299 UB820 deck, we should look next at why the UB450 is so much cheaper.

For starters, it lacks the more expensive deck’s built-in, digital-to-analogue audio decoder. The DP-UB450’s rear panel thus carries a power jack, a LAN port, two HDMIs (one for video and audio, and one to feed audio only to an AV receiver or soundbar), and a coaxial digital audio output. There’s no array of 7.1-channel analogue line-outs.

The Panasonic DP-UB450 also does without the UB820’s streaming apps, and Panasonic’s excellent HCX video processor. Nor is there any sign of the HDR Optimiser engine that lets Panasonic’s UB820 and flagship UB9000 4K Blu-ray players adjust HDR playback according to the abilities of your TV and your room’s light conditions.

You can still turn HDR off, though, and just enjoy a 4K Blu-ray’s extra resolution if you’re using a projector or budget TV that doesn’t handle HDR well (which most don’t, to be honest).

The UB450’s interior design and componentry exhibit little of the audiophile ambition of the UB820, and there’s no reappearance of the Digital Tube Sound feature for recreating a warmer, richer sound with compressed digital music sources.

The Panasonic DP-UB450 doesn’t have many features to get your head around. Of most importance is that you have either the HDR10+ or Dolby Vision features – or both! – turned on, depending on the capabilities of your TV.

In fact, you might as well leave them both on except in those instances that you have a disc for which you have a preference.

The Panasonic DP-UB450 is no rival in performance terms to its more expensive UB820 sibling, especially when it comes to picture quality.

The first thing I noticed was that pictures aren’t as detailed or sharp as those of the UB820. They do still look “4K”, holding up pretty well against pictures from other budget decks from the likes of Samsung and LG.

However, pictures lack the snap, precision, noiselessness and three dimensionality seen from those of the UB820. Presumably because of the cheaper deck’s less impressive build quality and lack of HCX processor.

Again, none of the UB450’s shortcomings versus the UB820 are poor by the standards of the budget 4K Blu-ray marketplace. The only similarly priced player I can think of that performs better with HDR10 is the £199 Sony UBP-X700. But that deck doesn’t support HDR10+, and its Dolby Vision implementation is much less user-friendly than Panasonic’s. 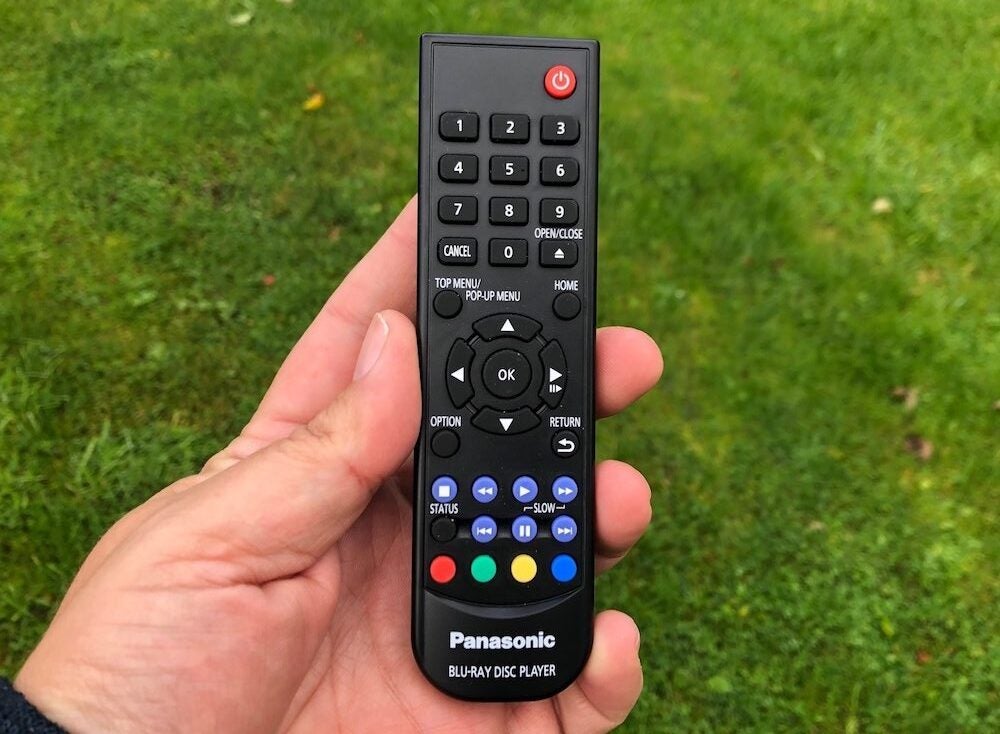 However, the UB450 does manage one surprising picture advantage over both the UB820 and Sony’s recent, more expensive X800Mk2 and X1100ES 4K Blu-ray players: playback of Dolby Vision sources at their “correct” brightness levels. There’s none of the elevated brightness and clipping (loss of subtle shading and detail) in the brightest parts of HDR pictures that those other more expensive players exhibit.

This deepens the mystery of the reason that this Dolby Vision issue has cropped up with some recent 4K Blu-ray players when DV works fine on other decks. My best guess is that different chipsets or Dolby Vision profiles are involved.

While I know that Panasonic and Dolby are investigating, I haven’t heard anything about a solution for the UB820 and Sony’s recent players yet. But anyway, with the Panasonic DP-UB450 you don’t actually need a solution; its DV works just fine.

The Panasonic DP-UB450 handles movie soundtracks – be they Dolby Atmos, DTS:X or any of the older, non-object based formats – without issues. They sound crisp, clean, detailed, well timed and dynamic. The UB820’s built-in multi-channel decoder sounds a little more refined, especially with multi-channel music, but only if you have a pretty high-end sound system to keep it company.

When it comes to playing compressed audio file formats and CDs, I did miss the extra warmth and openness delivered by the UB820’s Digital Tube Sound feature. That said, the UB450 does absolutely well enough for its money, delivering good levels of clarity and detail. It certainly doesn’t sound as cheap as it looks.

The UB450’s HDR10+ and Dolby Vision support makes it uniquely well specified and future-proof for its money. Sony’s X700 performs slightly better, but it lacks HDR10+ support and offers up a rather half-baked Dolby Vision solution.

You can stretch your budget further

If you’re able to find the extra £110 required for the Panasonic UB820, I think you should go for it. The more expensive model’s all-round superior performance quality, together with its extra picture set-up tools, makes it well worth the extra – despite its strange but hopefully fixable (and not actually unwatchable) Dolby Vision glitch. The UB820’s picture performance advantages over the UB450 become more obvious the bigger the screen you have.