Panasonic’s fantastic DMR-BS850 redefined digital recorders as we know them with hi-def Blu-ray recording and twin Freesat tuners, but its extensive, groundbreaking feature list made it staggeringly expensive. Thankfully Panasonic has also catered for buyers on a lower budget with this stripped-down version, which does away with Blu-ray recording and offers a smaller hard-disk for around £400 less.


The DMR-XS350 can record high- and standard-definition programmes from its twin Freesat tuners onto the 250GB hard-disk using the 14Mbps Direct Recording (DR) mode. This captures the digital broadcast bitstream (including 5.1-channel sound, subtitles and Audio Description), which means there’s no deterioration in picture quality when you record, unlike most DVD/HDD combis which have to decode the data first.


The lack of Blu-ray recording obviously slashes the amount you can archive on a single disc compared with the BS850, but like all Panasonic recorders the XS350 supports every DVD format under the sun, with RAM being the most useful in terms of editing flexibility. Also useful is dual-layer DVD-R and DVD+R recording, which lets you store up to 14 hours of SD material.


Freesat functionality is identical to that of the BS850. Twin tuners offer a level of flexibility missing from Panasonic’s Freeview combis, allowing you to record one channel and watch another or record two while playing back something from the hard-disk. The deck’s lack of Blu-ray recording and inability to copy hi-def programmes onto DVD in their native form eliminates any concerns over copy protection, so there are no flags that limit the amount of copies you can make.


You get a smart-looking 8-day EPG, which can be filtered by genre. The Landscape view shows seven channels at a time, laying them out in a user-friendly grid formation and helpfully listing all of the available options at the bottom. In Portrait mode the EPG focuses in on a single channel, listing the next seven programmes. The whole thing is much clearer and easier to follow than Panasonic’s cluttered Freeview EPG, although it’s a shame you can’t keep up with live TV as you browse.

Recording a programme from this EPG couldn’t be easier – simply highlight it and hit OK. Another screen then asks if you’d like to record the single programme or the entire series. If you’ve selected a programme that’s being simulcast in HD, the deck then asks which one you’d like to record. Make your selection and a further screen appears that allows you to check all the details. It’s all rather long-winded, but at least it ensures that you record the right programme. The Guide Link feature tracks the start and end times of each programme to account for schedule changes.


The Direct Navigator screen, where your recordings are stored, is also well laid out. It’s not flashy or ostentatious, just a simple list with large legible text and big blocks of colour, which should help HDD newcomers find recordings quickly and easily. They’re labelled with the programme name, date, time and channel, and a small box plays the highlighted recording. 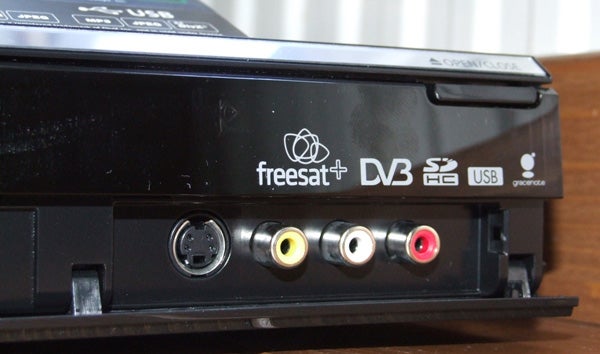 The rest of the unit’s GUI (including the central Function menu, setup screens and Freesat info banners) follows in the same vein – simple but effective. For a flavour of what they look like, take a gander at our review of the BS850 as this deck’s GUI is similar (apart from the Blu-ray related stuff, of course). The remote is identical too, and boasts Panasonic’s usual intuitive layout and large, colour-coded buttons.


The XS350 certainly has inner beauty, but the outside ain’t bad either. It uses the familiar black fascia with flashes of silver here and there, and all the electronics are packed into a substantial, weighty frame. On the front is a display panel that’s easy to read from the other side of the room and a pair of red lights that indicate when each tuner is recording.


Underneath a flap that spans the width of the front panel is an array of AV inputs – S-video, composite and stereo audio – as well as more glamorous sockets like an SD card slot, USB port and DV input. The SD card slot and USB port allow you to play back or load up a variety of digital formats onto the hard disk, turning it into a media library that resides in your living room and not on your PC. You can even use the deck to rip CDs as LPCM, and the built-in, updateable Gracenote database tags your tracks automatically. 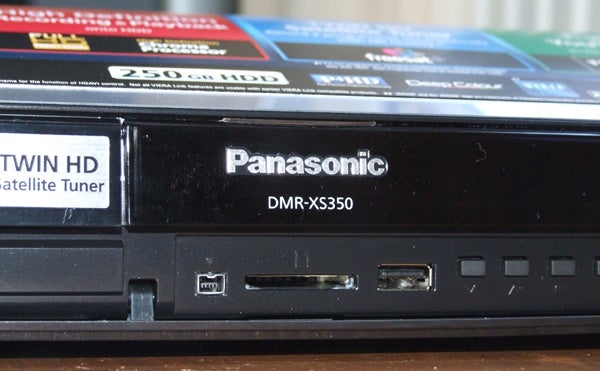 Like the BS850, the deck will play back DivX, MP3 and JPEG from USB, CD or DVD but you can’t copy DivX onto the hard disk. You can, however, transfer MPEG-2 video or AVCHD shot on a Panasonic camcorder to the hard disk from SD card, as well as JPEG photos. All-in-all, this is a terrific one-stop shop for your digital content.


Incredibly, the features don’t stop there. The XS350 is equipped with Viera Cast, allowing you to watch YouTube videos and Google Picasa photos on your TV through the Ethernet port on the back panel. You can also pause live TV and access a handy range of editing functions, while the HDMI v1.3 socket feeds upscaled DVD images to your TV and supports Viera Link. Other connections include two Scarts (one in, one out, both RGB-capable), component output, S-video/composite/analogue stereo input/output and optical/coaxial digital audio outputs.

In action the XS350 is nigh-on flawless. Naturally, live hi-def broadcasts from BBC HD look sensational, packed with crisply-rendered detail, richly-saturated yet natural colours and precise edge definition. Its coverage of Wimbledon 2009 is a prime example of these virtues – the throngs of people in the crowd are reproduced with pin-sharp clarity to the point where you can make out faces from a distance, plus the lesser-trodden parts of the green courts and skin tones look utterly convincing.

After recording some HD tennis coverage onto the hard disk in DR mode, there isn’t even the slightest reduction in picture quality. We also converted some hi-def tennis action from the original DR mode into HL, and the results are a revelation – the mega-efficient MPEG-4 encoding squashes up the file size without taking a huge toll on the resulting picture quality. Yes there’s a bit of mosquito noise surrounding the players as they glide across the court but the images keep their hi-def look, which is the most important thing. We also copied some HD content onto a DVD-RAM disc in XP mode, and despite dropping down to SD resolution the picture quality remains superb thanks to the high quality of the original HD source. There’s some shimmering on busy areas of detail but nothing to moan about.


The XS350 impresses in every other respect – recordings from an external Sky box in the XP and SP modes look consistently clean and bold, as do the resulting DVD copies. LP and EP recordings suffer greater noise levels and softness but remain enjoyable, and pre-recorded DVD playback is supremely detailed and cinematic, particularly when upscaled to 1080p. YouTube videos on Viera Cast played back during our test with no glitches, although picture quality is mostly dreadful and broadband limitations scupper hi-def playback.


On the audio front the XS350 makes a solid CD player, outputting music from the analogue ports with a lively, open tone, while the LPCM encoding gives ripped tracks a crisper, more detailed sound than MP3 files played via USB.

If you can, rig the deck up to an AV receiver either using HDMI or one of the digital audio connections – that way you’ll be treated to superb Dolby Digital 5.1 sound from DVDs and BBC HD, which adds an extra dimension to its Wimbledon coverage – crowd noises envelop you, the umpire’s voice resonates and the sound of a single voice shouting ‘come on Andy!’ from the back of your living room still provides a transient thrill.


Overall the DMR-XS350 is a very impressive DVD/HDD recorder, sharing the same user friendliness and top-notch performance as its pricier stable mate. Owners of Sky+ HD need not apply, but if you’re looking for a slick and flexible HD-capable recorder and have no use for a Blu-ray drive then the XS350 has the talent to make £600 feel like money well spent.


It’s also worth noting that the inclusion of twin Freesat tuners and hi-def channels make this a much better option than Panasonic’s DMR-EX89 single-tuner Freeview combi, although you do have to pay a good £200 more for the privilege, not including any satellite installation costs.